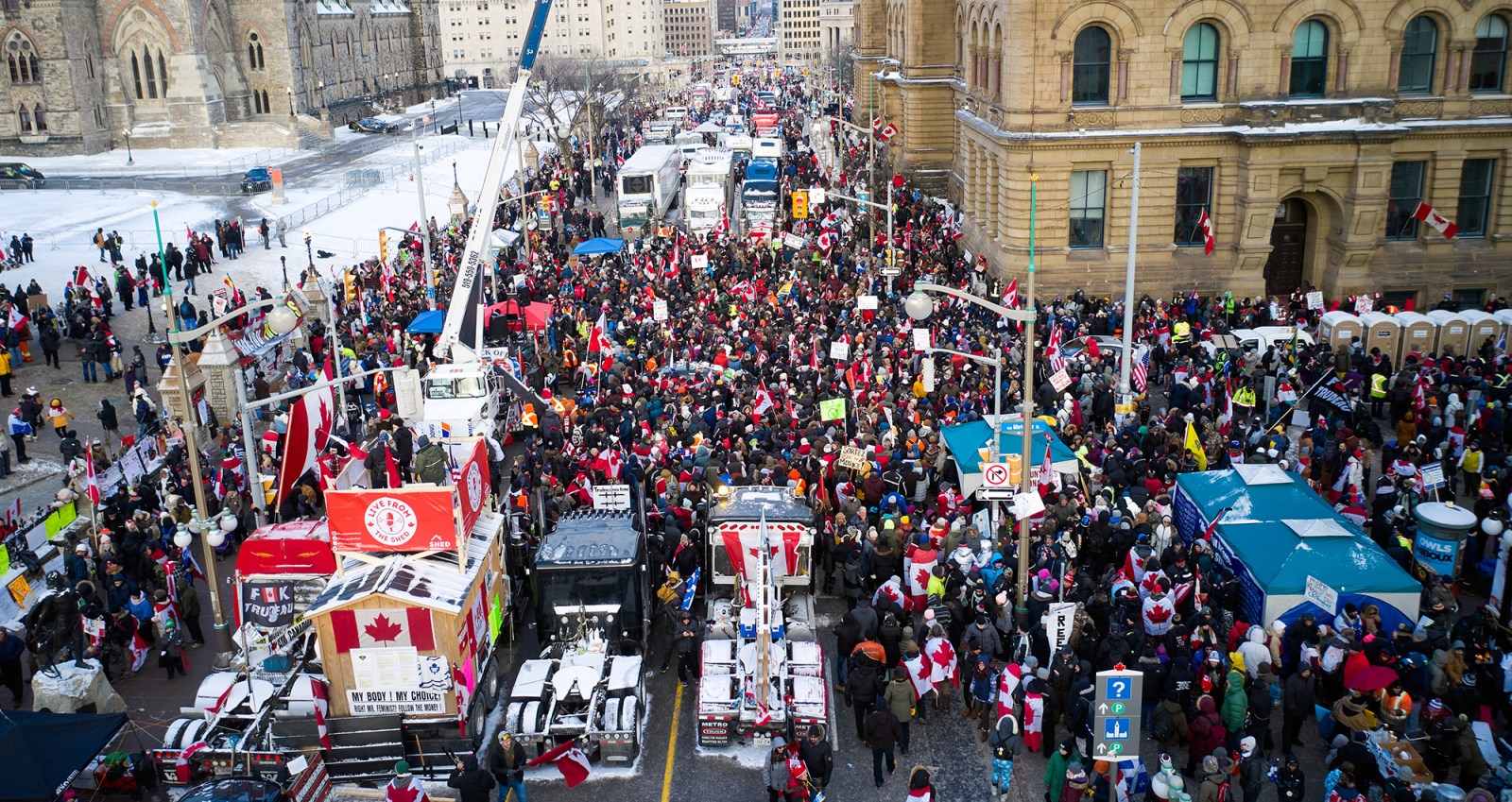 Truckers and supporters rally in front of Parliament Hill during a protest in Ottawa, Ontario, Canada, on 12 February 2022. Truckers continue their protest against the mandate by the Canadian government for vaccines against Covid-19. (Photo: EPA-EFE / ANDRE PICHETTE)

Ontario Premier Doug Ford said Canada’s largest province will drop many of its pandemic-fighting measures next month. The move comes against a backdrop of protests, initially against vaccine mandates, that have spread across Canada.

Hong Kong’s daily virus cases topped 2,000 for the first time, with health officials warning of a “crisis” as a growing number of positive cases threatened to overwhelm hospitals and upend the government’s Covid-zero strategy.

Washington will lift its mask mandate in certain settings beginning on March 1, Mayor Muriel Bowser said. The nation’s capital will no longer require face coverings in restaurants, bars, gyms and similar indoor venues. However, masks still will be required in schools, healthcare facilities and on public transit.

Italy’s vaccination mandate for about 8.8 million workers over 50 will kick off on Tuesday. Workers in the private and public sector will be required to show their so-called super green pass to prove their vaccination, or face fines of up to €1,500. Until Monday, proof of a negative test was enough to enter workplaces. More than 91% of people over 50 are partly vaccinated, leaving more than one million of the 50-59 age group without any vaccination.

Ontario Premier Doug Ford said Canada’s largest province will drop many of its pandemic-fighting measures next month as cases and hospitalisations decline.

Proof-of-vaccination requirements and capacity limits in indoor public settings are among the measures that will be dropped as of March 1 if the health system continues to improve, Ford said on Monday. Masking requirements will remain in place, the province said.

The move to end the measures comes against a backdrop of protests, initially against Covid-19 vaccine mandates, that have spread across Canada and hit Ontario especially hard. Demonstrations have shut down parts of Canada’s capital city of Ottawa for more than two weeks, and protesters had blockaded a bridge that serves as the country’s largest trade artery with the US for about a week through yesterday.

UK to give details on vaccinations for children

The UK will set out “more details” on its vaccination strategy for children aged five to 11 next week, as part of its planned “Living with Covid” strategy, Prime Minister Boris Johnson’s spokesman, Max Blain, told reporters on Monday.

At present, only children in clinical risk groups in that age bracket are entitled to vaccination, following advice in December from the government’s Joint Committee on Vaccination and Immunisation (JCVI). The JCVI has since provided the government with advice for those not at risk, which ministers are now considering, Blain said.

Lithuania scrapped all Covid-19-related travel restrictions for European Union member states and will no longer require proof of vaccination or tests to enter the country.

The spread of the Omicron variant shows that “additional requirements for the EU member states are no longer expedient at this phase,” Health Minister Arunas Dulkys said on Monday.

Health authorities announced 2,071 cases on Monday, as well as 4,500 preliminary infections. Cases have exceeded capacity at Hong Kong’s public hospitals, health officials have said, adding they will now shift to prioritising care for the elderly and children who get Covid.

Indonesia is considering lifting all quarantine requirements for travellers around April as Covid-19 hospitalisations and fatality rates remain under control despite a resurgence in cases.

Starting next week, the required quarantine period is being reduced to three days from five for incoming travellers who have received a third dose of vaccines, Luhut Panjaitan, the Cabinet minister in charge of the pandemic response in Java and Bali, said in his weekly briefing on Monday. PCR testing requirements will remain in place for those arriving travellers.

Taiwan plans to ease border restrictions for business travellers and cut quarantine to 10 days from 14 for all arrivals, according to a statement from the Centers of Disease Control. Business travellers can currently only enter after getting special government approval. The new rules should take effect by mid-March.

Seven confirmed cases and one asymptomatic infection were reported in the Chinese city of Suzhou, prompting officials to tell schools and kindergartens to postpone the new semester and start mass testing in an industrial park in the city. Preliminary results link the cluster to Omicron.

The Ambassador Bridge that links Canada with the US reopened, clearing the largest trade artery between the two countries after protesters shut it down.

The protest against Covid restrictions halted the transport of $13.5-million an hour in traded goods and forced automakers to reduce production or cancel shifts at plants in Ontario and Michigan.

New Zealand’s response to Omicron will move to a new phase from midnight on Tuesday, Prime Minister Jacinda Ardern said at a news conference.

A confirmed case will need to self-isolate for 10 days rather than 14, while a close contact must isolate for seven days rather than 10. The period of self-isolation for New Zealanders returning home from Australia from the end of February drops to seven days. People in a critical industry can keep going to their workplace if they test negative using a daily rapid antigen test.

Meanwhile, protesters rallied for a seventh day on parliament grounds in Wellington. Concerns are growing about sanitation at the site, where demonstrators are calling for an end to vaccine mandates.

Merck’s Japan unit MSD said it will accelerate delivery of its Covid-19 drug to the Japanese government, providing enough pills to treat 220,000 people in February and another 330,000 people in March as infections in the country rise.

Japan’s health ministry also agreed to buy 10 million additional doses of Pfizer’s Covid vaccine in the first quarter as the country ramps up its booster programme.

Infections reported at the Winter Olympics

Three new Covid infections were found among people involved in the Olympics on Sunday, the Beijing organising committee for the Games said in a statement.

About 300 to 400 cross-border drivers are in quarantine in Shenzhen for 21 days and fewer than 50 can continue to work, Radio Television Hong Kong reported, citing an official.

Earlier this month, Hong Kong residents were facing a shortage of fresh food – and fast-rising prices for what they can find in stock – as anti-virus controls in mainland China left truck drivers responsible for ferrying supply unable to re-enter the city.

Hong Kong’s government is seeking HK$27-billion ($3.5-billion) for its anti-epidemic fund after the surge in cases. Legislators will deliberate the funding proposal on February 15.

South Korea will begin offering a fourth Covid vaccine to people with weakened immune systems and nursing home patients as breakthrough cases among the vaccinated elderly have started to rise.

The country has seen a spike in new cases overall, mainly driven by the Omicron variant, but deaths and critical cases have remained relatively low with nearly 90% of those 60 years and older having received booster shots. South Korea reported 54,619 new cases on Monday.

Under current rules, most travellers to Singapore are required to take a PCR test on arrival and isolate until returning a negative test result. A move towards ART tests would ease burdens on inbound passengers by slashing costs and cutting the waiting time for results from several hours to 15 minutes. DM/MC