Stylish ensembles in short supply as the president make... 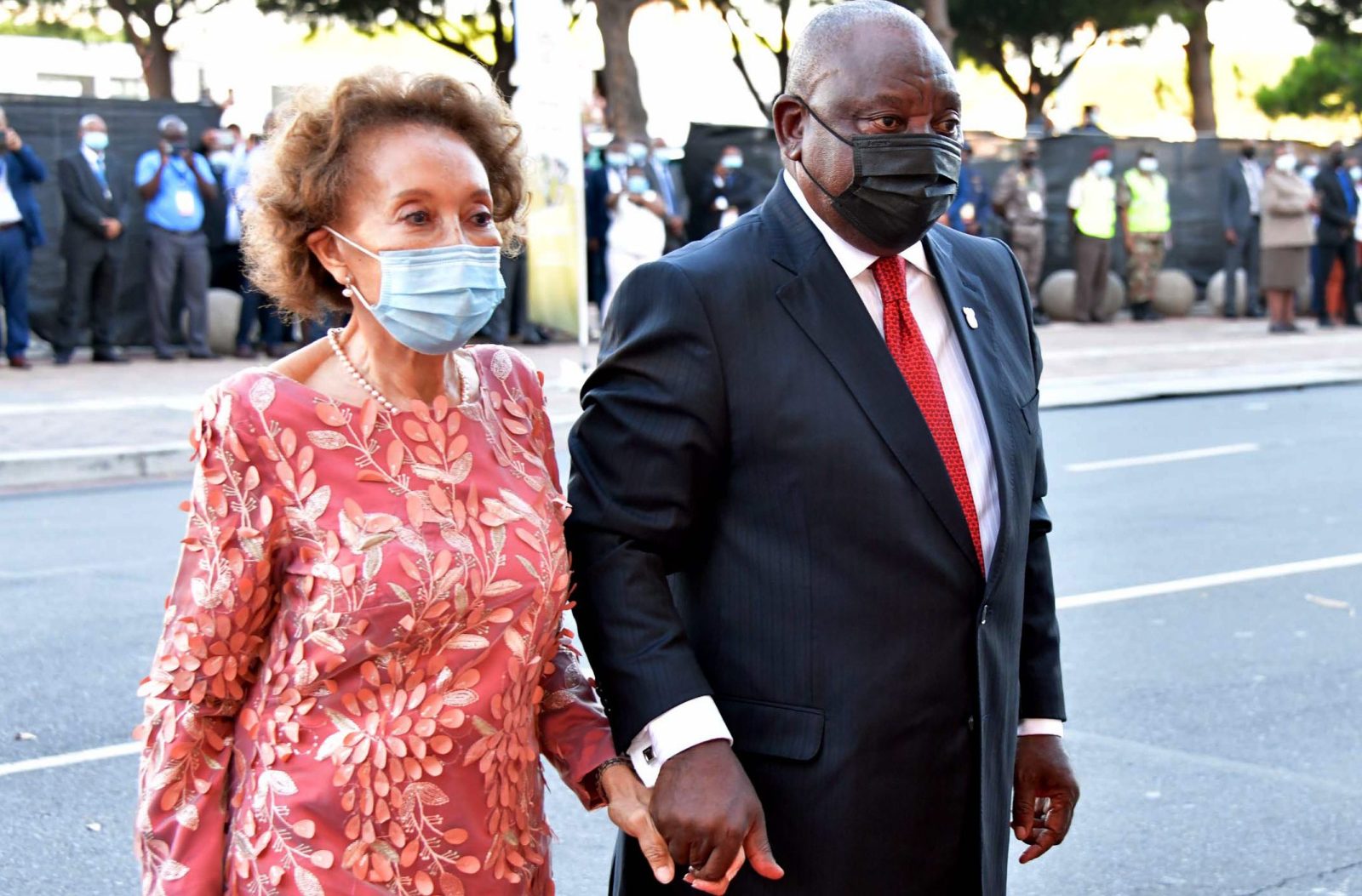 First lady Tshepo Motsepe and President Cyril Ramaphosa before delivering the state of the nation address at the city hall in the Cape Town. Photo:Elmond Jiyane/GCIS

The traditional fashion parade had all but vanished at this year’s State of the Nation Address at the Cape Town City Hall, but that didn’t stop politicians and guests from doing twirls and pauses as well as highlighting their locally made outfits.

So much of the fashion landscape at the 2022 State of the Nation Address (Sona) seemed to be compressed into sobriety and restraint – shuttled to the City Hall, attendees stepped out of cars, waved, smiled, and walked inside the building with not much pomp or pageantry.

The expected attire of the politician at Sona is often bold, audacious, flamboyant, a statement of sorts. Previous red carpets have been paved with many frills and ruffles: in 2014, as the EFF emerged in chaos and hullabaloo in their now-ubiquitous red overalls complete with red hard hats, there was Bridgette Radebe in a red and turquoise dress by her go-to designer Marianne Fassler; that same year, the then minister of energy, Tina Joemat-Pettersson, had chosen a golden bronze and orange tailored dress from South African designer Gavin Rajah, with rough, sharp epaulettes and a tight waist that made her resemble a ruthless Catherine de’ Medici; there was Lindiwe Mazibuko who always mixed and matched fabulous modern pieces by local designers; or Dr Precious Moloi-Motsepe in outfits straight from the AFI rails, not missing a chance to promote her fashion business venture; and who could forget back in 2017, the impeccably tailored sea-blue suit of former minister of home affairs Malusi Gigaba, next to his then-wife, Norma Gigaba, in a white mermaid corseted evening gown created by couture designer Gert-Johan Coetzee.

And so Sona 2022 seemed like a fashion sigh, a shudder of the off-the-shoulder dress. But then came President Cyril Ramaphosa.

Dressed in a black self-striped suit with notched lapels – made by local retailer Foschini – with a white shirt and black leather brogues shoes – also made locally – he picked a textured candy-apple red tie with cherry-red patterns to complete his outfit.

If the tailored dark suit paired with a white shirt is a constant in Ramaphosa’s official wardrobe, the red tie is also a regular feature: it comes in different shades of red: a burgundy to express a more relaxed (or despondent?) attitude, like the one he wore in a 2013 picture by Pieter Hugo for The New York Times as the newly elected deputy president of the ANC; weaved with dark blue on his official portrait, as if to temper the excitement; exultant and triumphant, a bright South African flag red, at a Bloomberg interview in 2020; a slightly orange, almost washed-out red when he announced to South Africans that we would go into lockdown for 21 days, on 26 March 2020, at midnight.

But on Thursday, it was bright again. It looked decisive, influential, unbothered – it wanted to silence the vermillion-red overalls, to muffle, even if only for a moment, the mahogany-red despair of years of economic and social downfall, it lightened the load on our battered souls, a promise against the otherwise dark suit of our existence. Did it work? Probably not.

The colour red is not innocent either: it is “one of the most visible colours in the spectrum (second only to yellow)” and is often used to convey danger. But it’s also a colour symbolising happiness and luck in many countries, like China and India; Kate Carter wrote in The Guardian, that: “In Roman mythology, [red] was associated with blood, of course, and courage. It was the colour of the god of war, Mars – and the colour of the army… The emperor Charlemagne painted his palace red, wore red shoes and is even rumoured to have had red hair… Red was the colour of blood – but blood was a symbol not just of death, but of life – of fertility and love.” That’s a lot of messages in one tie – if messages there were.

Beyond the choice of colour,  Ramaphosa, as an ode to the power of dressing, and the impact our sartorial choices may have,  also made a point to mention “local is lekker”, asking South Africans to buy local.

“In the clothing industry, a number of retailers have announced ambitious localisation sourcing plans. One of these retailers, Foschini, kindly made the suit that I am wearing today at its new formalwear factory, Prestige Epping. Five years ago, more than 80% of all Foschini Group merchandise came from the East. Today, nearly half of the merchandise is locally made.

“The genuine leather shoes I am wearing were made by members of the National Union of Leather and Allied Workers from Bolton Footwear in Cape Town and Dick Whittington Shoes in Pietermaritzburg,” he said.

Long before him, former Finance minister Trevor Manuel had also worn locally-made ties, suits and shoes; Manuel’s late mother was a factory worker at Rex Trueform in Cape Town. And other politicians have proudly worn locally-made outfits (take that, Gucci) out of deference and awe for the work of South African craftsmen and women, and our talented artisans.

Still, as young South African designers are building brands with international reach, it is always refreshing to hear that efforts are and will be made to rebuild and strengthen the manufacturing industry locally. Subdued or not, red or not, next year’s Sona’s twirls and turns should be once again, even for a night, proudly South African. DM/ML