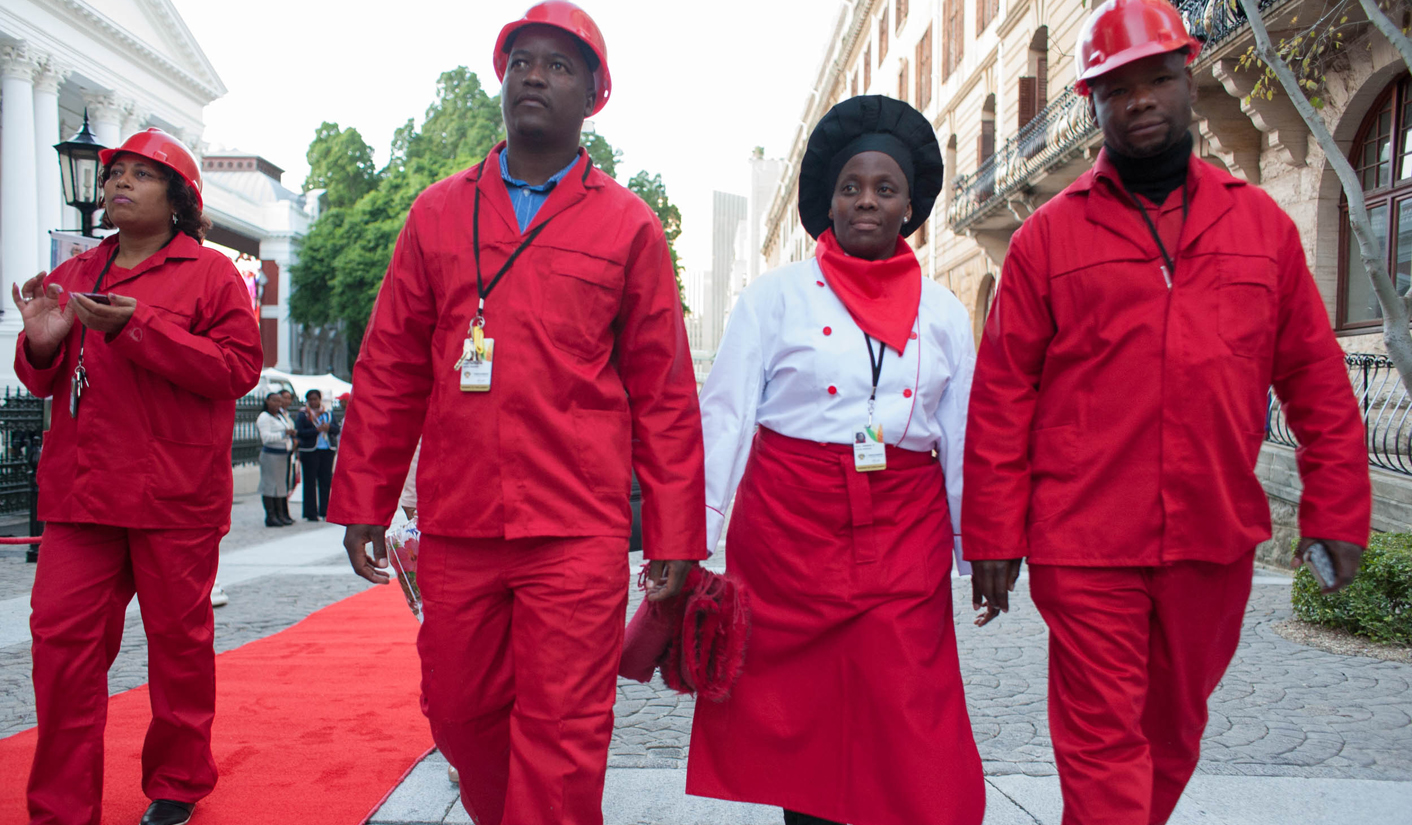 The State of the Nation Address rolled out its red carpet once again, this time under chillier temperatures. Be it because of the colder weather or to concur with President Zuma’s less buoyant attitude, the mood – EFF red wave aside – seemed tamed with elegance and understatements (well, mostly). EMILIE GAMBADE reports.

Same year, same event, four months and a world apart: at the SONA 2014 2.0 fashion seemed, for once, to have mirrored something far more interesting than just a sartorial playground or a matric dance for grown-up people. Of course, there were still some bursts of excessiveness, with frills, furs, jabots and peplums popping up around collars, hips and waists. But in general, at this new presidential address, fashion was less outrageous and more explicit.

In the ring of power dressing, the EFF red workers’ outfits were a noticeable winner. (See main photo by Greg Nicolson) There couldn’t have been a louder, clearer and cleverer fashion statement than wearing bright red overalls (complete with yellow rubber gloves and red ear muffs) in the sea of suits and ball gowns present at Parliament, to show the party’s ‘dedication to the poor and the workers’. Even the ever-stylish Magdalene Moonsamy, who has made daring choices at past SONAs, wore a maid’s outfit in solidarity.

Newly appointed Minister of Energy Tina Joemat-Pettersson had a landslide victory in the Look-at-me-I’m-unbeatable category. In a golden bronze and orange tailored dress from South African designer Gavin Rajah, with rough, sharp epaulettes and a tight waist, she resembled a ruthless Catherine de’ Medici.

Foreign minister Maite Nkoana-Mashabane also spoke of power in a petrol blue colonel military coat, made by Ze-Couture. The rigidity of the cut, the leather hang straps, the Mao collar and the under-the-knee length gave her a determined – and unforgiving – attitude. If it reflects in anyway her stance on our foreign affairs, it seems that softness won’t be au goût du jour.

Mandla Mandela, along with his wife Nodiyala, was dressed once again, in a traditional Xhosa outfit, walking barefoot. Nelson Mandela’s eldest grandson keeps on showing up at SONA in similar outfits; he explained to SABC that those had been made in Qunu, his “grandfather’s birthplace and where the roots of the Mandela chieftaincy are located”; the clothes were a way to show that he is “[flying] the flag high of [his] birthplace”.

Whispering modesty, Helen Zille’s outfit, black top with golden threads that formed a simile Gucci logo – sourced at an Old Harbour Vintage shop in Hermanus – topping a black ankle-long skirt, golden ballerina shoes and a low-key black and silver clutch, was a dramatic contrast with her previous fashion choices (one being a memorable turquoise dress with matching clutch in ostrich feathers). Blending in with the crowd of black suits, almost inconspicuous, Zille didn’t seem too much in the mood for grandeur and decadence.

On the other end of the fashion spectrum came Lindiwe Sisulu, impeccable in a très fitted cream dress in lace with a real fur collar. The dress was designed by Sisulu’s perennial designer, Susan Hansen, and she insisted on saying that the fur was imported and stamped with a “no harm to animals” certification. (One wonders what PETA would say.)

There is something in Thobeka Madiba Zuma’s sartorial choices that simply says, “I am the younger, more confident and more stylish one”. At every official event, President Zuma’s second last wife shows up in perfect ensembles that enhance her voluptuous figure and make her shine; this time, in a dark blue underdress covered with gold lace, she was wrapped in a cropped fur cape that was right on trend. Spot on.

There were also some striking couples at SONA version 2.0: Mmusi Maimane in a dark blue suit and sky blue tie and his wife Natalie in a bicolor gold and marine blue corset dress; Bheki Cele and his partner were modern and sophisticated – him in a pale pink shirt and matching darker tie with a grey suit, her, very thirties, in a sequined dress and throw made by François Vedemme.


And then there were some fashion obscurities, beyond the faux pas, where the statement is so obvious that it becomes hollow: Ansie Smit’s henna back tattoo of the African continent was just that, a shouting sign of belonging that seemed to highlight more her plunging V back (did it really need this?) than to support any particular cause.

SONA 2.0 has come and gone, leaving behind a tail of red overalls, tired faces and winning smiles. Gowns, ties, hats and furs will soon hang back in cupboards all around the country, leaving the stage for a louder and more vociferous, or so we hope, debate. DM