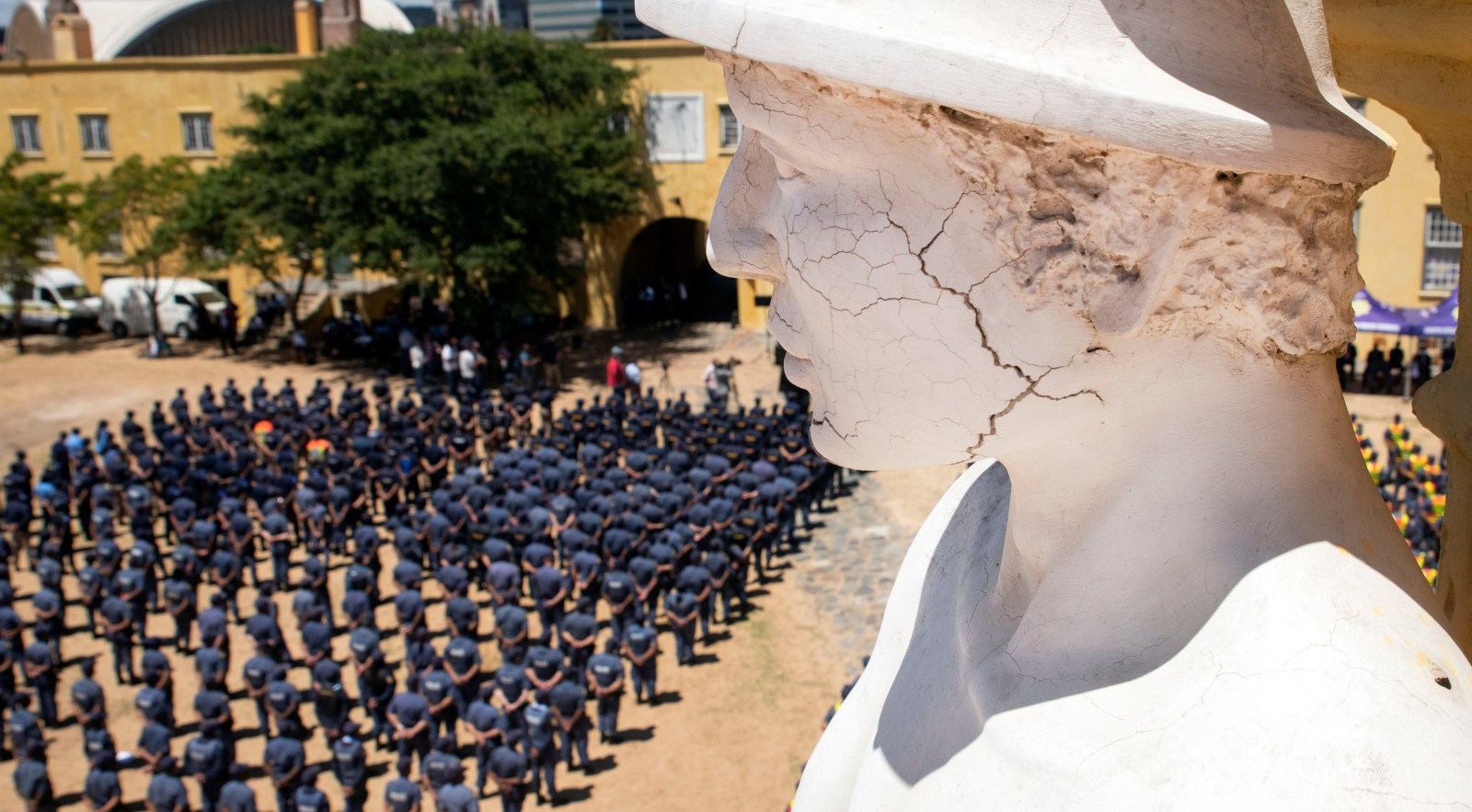 Police and law enforcement personnel are addressed at the Castle before being deployed around the Cape Town City Hall ahead of the State of the Nation Address on 10 February 2022. (Photo: Gallo Images / Brenton Geach)

South Africa’s security structures, which failed to thwart threats and violence, are to be overhauled, with President Cyril Ramaphosa set to announce imminent leadership changes.

It’s been a long time coming, but South Africa’s security arena is finally in for a shake-up and sharpening.

President Cyril Ramaphosa has announced an array of plans to bolster crime-fighting and accountability, from establishing units to specifically tackle extortion, to special court rolls dedicated to State Capture cases.

Staff will also be added to and moved from security agencies.

“We will begin immediately by filling critical vacancies and addressing positions affected by suspensions in the State Security Agency and Crime Intelligence,” Ramaphosa said.

“We will soon be announcing leadership changes in a number of security agencies to strengthen our security structures.”

Ramaphosa made these announcements while delivering the annual State of the Nation Address on Thursday evening. His statements come as there is mounting pressure for him to clean up the South African Police Service and divulge the fate of police leaders, including the country’s top cop, National Commissioner Khehla Sitole, as well as those identified as State Capturers.

Policing failures, scandals and security in South Africa have been recently highlighted. Security issues were also highlighted via the mere location of Ramaphosa’s Sona on Thursday.

The address, for the first time under a democratic government, was not given in Parliament, but at the Cape Town City Hall. This was because a fire damaged Parliament after the building was allegedly set alight early last month. Of the blaze, Ramaphosa said: “The fire in Parliament reminded us of the destruction, violence and looting that we witnessed in parts of the country in July last year, of the more than 300 lives lost and many more livelihoods ruined.”

On Monday 7 February, the Presidency released a report into the July 2021 riots, which broke out after former president Jacob Zuma was jailed. Ramaphosa referred to the report on the mayhem during his address on Thursday.

“The report paints a deeply disturbing picture of the capabilities of our security services and the structures that exist to coordinate their work,” he said.

It concluded “that government’s initial handling of the July 2021 events was inept, police operational planning was poor, there was poor coordination between the state security and intelligence services, and police are not always embedded in the communities they serve”.

Ramaphosa added that, “Cabinet must take overall responsibility for the events of July 2021. This is a responsibility that we acknowledge and accept.”

It was not clear if Ramaphosa’s comments in any way referred to Police Minister Bheki Cele.

Ramaphosa continued: “We will, as recommended by the panel, develop and drive a national response plan to address the weaknesses that the panel has identified.”

He then mentioned the imminent changes planned for security agencies.

This ties in with what has become of Crime Intelligence, whose former head, Peter Jacobs, was controversially transferred out of the position last year, and as questions linger about Commissioner Sitole’s future.

Daily Maverick has reported that Sitole is the subject of two criminal complaints lodged by the Independent Police Investigative Directorate (Ipid). This is because of allegations, which he denied, that he did not cooperate with its investigation into why a police officer who was assassinated in 2020 was not under state protection at the time.

Before this, in September 2021, Ramaphosa served Sitole with a suspension notice over another allegation that he had failed to assist Ipid. South Africans are still waiting to hear what came of that.

In his Sona, Ramaphosa said that to improve relations between police officers and residents, community policing forums would be re-established.

“I am calling on all South Africans through their various formations to participate in developing our National Security Strategy.

“I will be approaching Parliament’s presiding officers to request that Parliament plays a key role in facilitating inclusive processes of consultation.”

Ramaphosa also addressed another crisis that had throttled South Africa, the effects of which are still being acutely felt – State Capture.

The Judicial Commission of Inquiry into Allegations of State Capture recently released parts one and two of three reports.

“While the definitive conclusion has yet to be delivered at the end of this month, the first two parts of the report make it plain that there was indeed ‘State Capture,’ ” Ramaphosa said.

“This means that public institutions and state-owned enterprises were infiltrated by a criminal network intent on looting public money for private gain.

“The reports have detailed the devastating effects of this criminal activity on SAA, Transnet, Denel, South African Revenue Service and Government Communications.”

State Capture, he said, especially affected the most vulnerable and poor in society. Ramaphosa plans to deal with recommendations relating to State Capture within four months.

“By no later than 30 June, I will present a plan of action in response to the commission’s recommendations,” he said.

“We will, as the commission’s first report recommends, strengthen the system to protect whistle-blowers, who are a vital safeguard in the fight against corruption and who take huge personal risk in reporting wrongdoing.”

The relevant legislation was being assessed and law enforcement was addressing concerns about whistle-blowers.

Those who enabled and carried out State Capture were also in focus.

“There are also discussions under way with the judiciary for the creation of special court rolls for State Capture and corruption cases,” Ramaphosa said.

He warned: “While we have taken decisive steps to end the era of State Capture, we know that the fight against corruption is far from over.”

Ramaphosa said he had faith that the National Prosecuting Authority (NPA) would carry out further State Capture Commission-recommended investigations.

A new boss was set to be appointed at the NPA’s Investigating Directorate after it emerged late last year that its head, Hermione Cronje, had resigned.

Ramaphosa also addressed crimes that had surged along with Covid-19 cases.

“Companies and individuals were conspiring with public officials to defraud the government of billions of rands in Covid-related contracts. As soon as evidence emerged of this corruption we acted.”

Ramaphosa said this led to:

Ramaphosa also announced a plan to tackle criminal gangs which targeted construction sites and other companies, extorting money from them.

Resources would be freed to recruit and train 12,000 more new police personnel.

“Earlier this month, I signed into law three new pieces of legislation, which has strengthened the criminal justice system, promoting accountability across the state and supporting survivors,” Ramaphosa said.

“The implementation of this legislation will go a long way to ensuring that cases are successfully prosecuted, that survivors are protected and that there are more effective deterrents in place.”

He said that despite what was being done to tackle problems, South Africa still faced challenges.

“Indeed, we are engaged in a battle for the soul of this country,” he said.