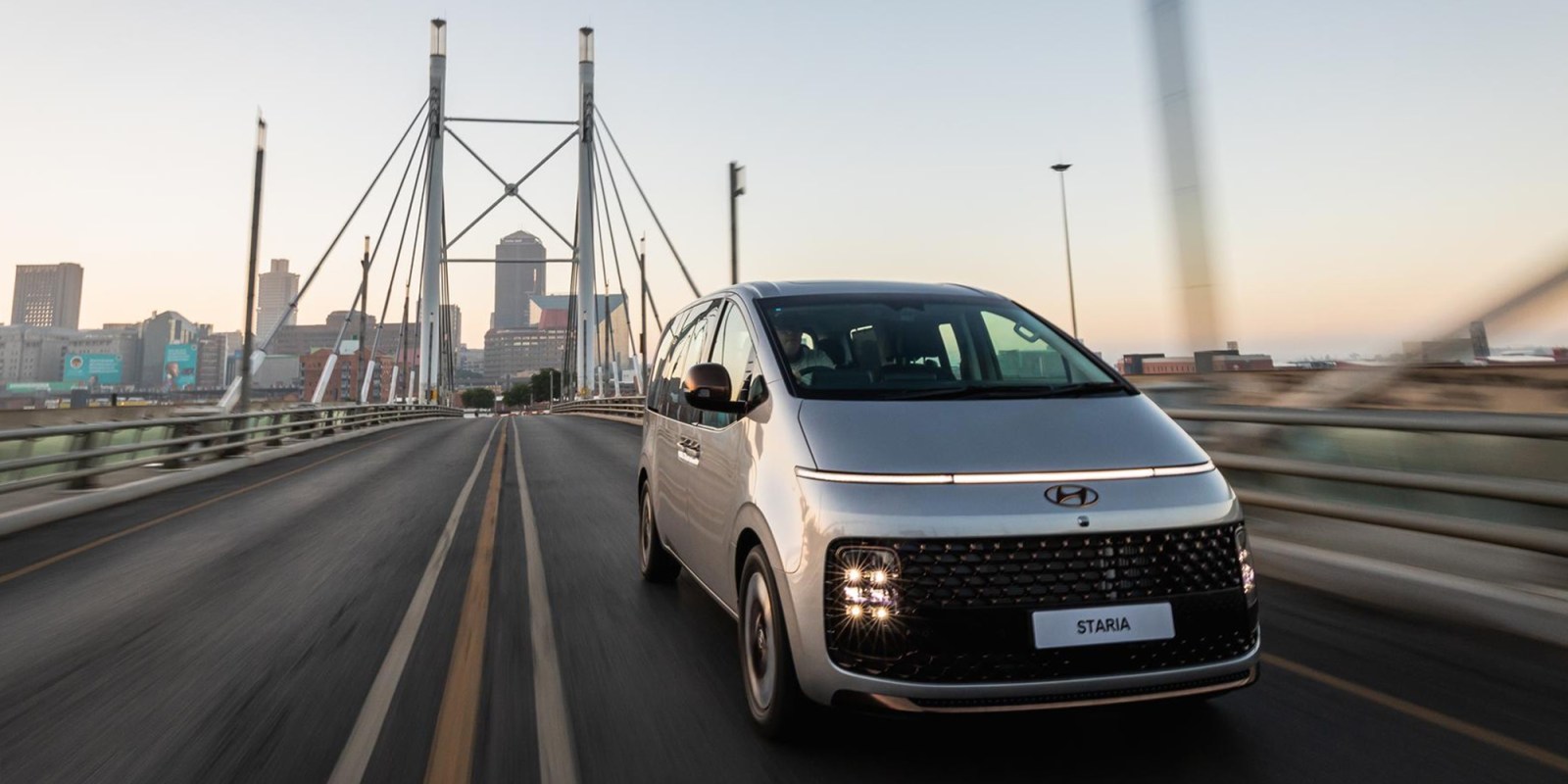 You might blink twice when you see Hyundai’s new multipurpose van on the road, mistaking it for something out of ‘Blade Runner’ or ‘Robocop’.

While the term “futuristic” is frequently bandied about in the world of motoring PR — often referring to anything that looks vaguely next decade — nothing has come close to Hyundai’s new Staria “space mobile”.

It is undoubtedly one of the most sci-fi vehicles on our roads right now. Think the 2002 Stephen Spielberg blockbuster, Minority Report, starring Tom Cruise.

The nine-seater Staria minivan — or “people mover”, as the Aussies like to call it — replaces the outgoing, rather drab H1 panel van, and went on sale late last year in SA. It has already had good uptake, selling more than 300 units.

Now with an equally “spacey” looking five-seater Staria multi-cab joining the range, the figures are highly likely to gain momentum. An even more adaptable Staria panel van will be introduced later this year, to make up a three-fold Staria MPV offering.

Hyundai clearly aims to take a meaningful share of the strongly supported Multi-Purpose Vehicle (MPV) segment in SA. In 2021, a not-to-be-sneered-at 19,006 MPV units sold locally, and methinks the Staria has a good chance of taking a fair slice of that pie.

With competitors like Ford’s Transit and Tourneo, the Mercedes-Benz Vito and V-Class, Toyota’s Hiace and mega-selling Quantum, as well as the Volkswagen T6 Kombi and Caravelle, the Staria stands out by miles, thanks to its radical styling.

But let’s get Back to the Future, because “futuristic” is exactly what the South Korean motoring giant was gunning for when the Staria was first launched in Thailand in July 2021.

According to Hyundai’s design team, the Staria’s interior is inspired by “a cruise ship”, while its exterior pays homage to a spaceship and reminds one of “the halo that illuminates Earth’s horizon during sunrise when viewed from space”. Well, not that many of us — besides Jeff Bezos and Richard Branson — have had the pleasure lately, but I’m sure you get the drift.

The interior is also an expansion of “hanok”, a traditional Korean architectural style (similar in a way to the Japanese concept of feng shui), which expands on spaciousness and allows passengers to feel that they are connected from the inside to the outside. In fact, Hyundai’s entire new design language has been called “inside-out”, and the Staria is one of its many new and future products to encapsulate this.

The whole spaceship/cruise ship effect is helped along by lowered belt lines and some of the most enormous panoramic windows I have yet seen in a vehicle. Furthermore, there are horizontal daytime running lights and vertical tail lamps. A positioning lamp that runs across the vehicle and a wide radiator grille with low-set headlamps combine to give it that Robocop feel.

In line with its spaceship theme, the interior and cabin is humongous. After all, “space is the final frontier”. There’s enough passenger room for a seven-a-side soccer team in the nine-seater, plus plenty of space for all the kit. There is also a wealth of cupholders, storage bins, space in the overhead console and handy little side pockets galore, as well as numerous phone-charging ports.

Tech-wise, the Staria features an eight-inch infotainment system and a 4.2-inch digital instrument cluster in the new five-seater. Some nifty add-ons to stay in line with its intergalactic feel include the 360° camera system that shows the Staria in its entire environment. The ceiling-mounted camera will give the driver and front-seat passenger a bird’s-eye view of what’s happening in the back rows — handy for parents who need to keep an eye on the roost.

One of my favourite Staria tricks is a camera view on the digital dash that activates when indicating, to avoid colliding with side traffic or kerbs.

There’s also the usual stuff you’d expect in this segment, like a leather-wrapped multifunction steering wheel, wireless smartphone charging, blind-spot detection and a must-have reverse camera and rear cross-traffic alert. It also has decent safety systems, including anti-lock brakes and electronic stability control and dual front, side and curtain airbags.

Both the nine-seater and five-seater share the same 130kW/430 Nm 2.2-litre four-cylinder turbodiesel engine. Amazingly, despite its imposing style, it’s really easy to drive. The steering feels light and the turning circle is surprisingly generous, which means it will be pretty handy in suburban and city environments.

On the open road, the drive was satisfactory, with little wind or road noise due to its upscaled insulation. For someone like me, who’s not an inch taller than 5’6”, the high-riding feel of the Staria is something to behold. Looking down on Land Cruiser and double cab Raptor drivers was rather lekker. From my perch, it felt like I was literally slow-boating, high above the rest.

Supported by an auto gearbox in this turbo-diesel, its eight-speed transmission is meant to enhance fuel efficiency, which it does. On my drive in both the five- and nine-seater, fuel consumption came in at about 8l/100kms — not bad for a spaceship.

If there are any niggles — and there aren’t many — if you’re into a cosy, touchy-feely kind of a drive, you might find all that glass a bit imposing and clinical.

The sheer height of this cruise ship may also be intimidating, especially when navigating underground parking, and I’d switch off the lane-keep assist tech as, during my drive, it felt over-neurotic when I happened to veer near a white line.

But overall, the Staria will stick out as a triumph in radical design and well-utilised space, admirably taking on its competitors in a rather predictable MPV segment.