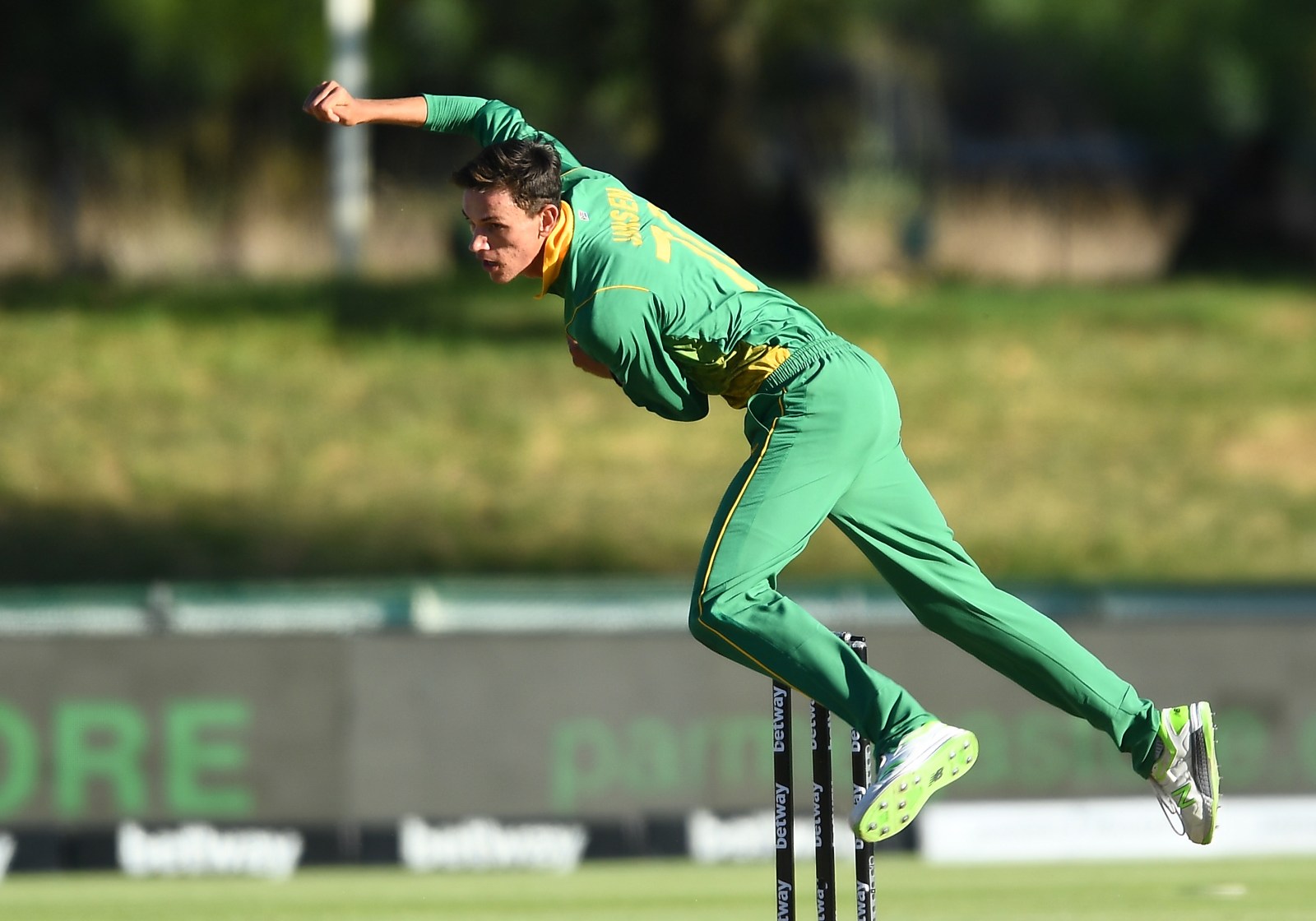 Marco Jansen of South Africa during the first One-Day International against India at Boland Park in Paarl on 19 January 2022. (Photo: Ashley Vlotman/Gallo Images)

Proteas left-arm seamer Marco Jansen is not only content with becoming a world-class fast bowler, he also wants to become a leading all-rounder.

Marco Jansen, the tall seam-bowling “find” of the summer, is reluctant to measure his height again in case he’s grown taller. At 21, he should have stopped growing, but in the past 18 months he’s stretched another 3cm. This is why there is some confusion over his actual height. He has been listed as anywhere from 2.04m to 2.09m tall, depending on the source.

Normally height shouldn’t be such a major talking point. But Jansen is not an average person, in sporting terms at least. He is a quality Test fast bowler. They are a rare breed. Moreover, he is a left-handed fast bowler of exceptional height, which is an even scarcer commodity.

He is also very slightly built and knows that to become a terrifyingly quick bowler, allied to the natural bounce he generates from such a great height, it will require more flexibility, strength and overall fitness.

Against India, where he was surprisingly called into the Test team after Anrich Nortje withdrew due to injury, Jansen caught the eye. At first, it was his height that had people who had never seen him agog. When he was given the ball on the first morning, to those with long memories, he resembled former Aussie left-arm seamer Bruce Reid. Neither has a massive jump at delivery and both would be classed as “fast-medium” rather than out-and-out fast bowlers.

But the height from which Jansen delivers the ball means he extracts extra bounce off the pitch. After a nervous start to Test cricket, in which he took one for 69 in 18.3 overs in the first innings at Centurion, he started to reveal his skills. A little bit of seam off the pitch, just a touch of swing in the right conditions and excellent control.

In the second innings of the first Test against India, Jansen took four for 55. By the end of the series he had taken 19 wickets at a superb average of 16.47, including two more four-wicket hauls.

And it was achieved with nous and control rather than express pace. Once he adds the latter to his quiver, he may well become unplayable on the right conditions.

“My personal goal is to go up to 145km/h, but I also know that I have to be a lot stronger to do that,” Jansen said. “There’s a lot of force that goes through your body, bowling that fast, and you have to condition your body to take all those loads. Personally, I think I can get there and I’m working on it.”

At full pace in the series against India, he bowled in the high 130km/h region. Adding another 10km/h to his armoury will certainly make life tougher for batters.

Since readmission South Africa has produced few left-arm fast bowlers. The menacing Brett Schultz played a handful of Tests but struggled with injury. Wayne Parnell never quite made it at Test level. Jansen, though, could be here to stay.

He is too young to remember perhaps the greatest lefty, Pakistan’s Wasim Akram. But YouTube videos are there if he ever wants to go see a master in action. Jansen’s frame of reference is more contemporary.

“Early on in my career I would just run in and try and bowl quick like Johnson. But now I look at some of the more technical stuff. For instance, Johnson had a sling action, which I don’t. Shaheen is a bit more on top and he works with his wrists. He’s very good at using his wrists to make the ball move. When I see something I go out and try it, but keeping in mind that every person is different.”

Jansen is not afraid of hard work and his ambitions do not end at becoming a great fast bowler. He wants to become a great all-rounder and his two favourite cricketers to watch growing up were Jacques Kallis and England’s Ben Stokes.

Both those players could easily be chosen as either a batter or a bowler and Jansen wants to achieve a similar kind of versatility. Against India, he certainly showed that he can bat, which is no surprise as he started his career as a batter who could bowl a bit.

“I don’t just want to be a bowling all-rounder, I want to become an all-round all-rounder if that makes sense,” he said with a chuckle. “I’m putting in so much hard work on my batting because I absolutely love to bat.”

The Proteas headed off to New Zealand this week for a two-match series against the World Test champions later this month and Jansen will no longer have the element of surprise.

His performances against India will ensure the Black Caps do their homework on his strengths and weaknesses, but at the same time Jansen is also growing in terms of his understanding of the game.

“In Test cricket I quickly realised that you have to be more consistent for longer,” he said. “Franchise cricket is also tough, but you have a bit more leeway. You build pressure for an over, for example, and you bowl one bad ball, you get away with it.

“In Test cricket, you have to build pressure for three or four overs and then your bad ball still gets put away. The batters are too good to miss out. You have to be on the money otherwise you’re going to fetch.”

He may not have spent a lot of time at the crease against India, but that will change because Jansen is working too hard to leave his potential unfulfilled through lack of effort. He is certain to be in the squad, harassing batters and scoring runs for a very, very long time. DM168