Pioneering, holistic and inclusive approach to education in Muizenberg at one with environment, at odds with bureaucracy 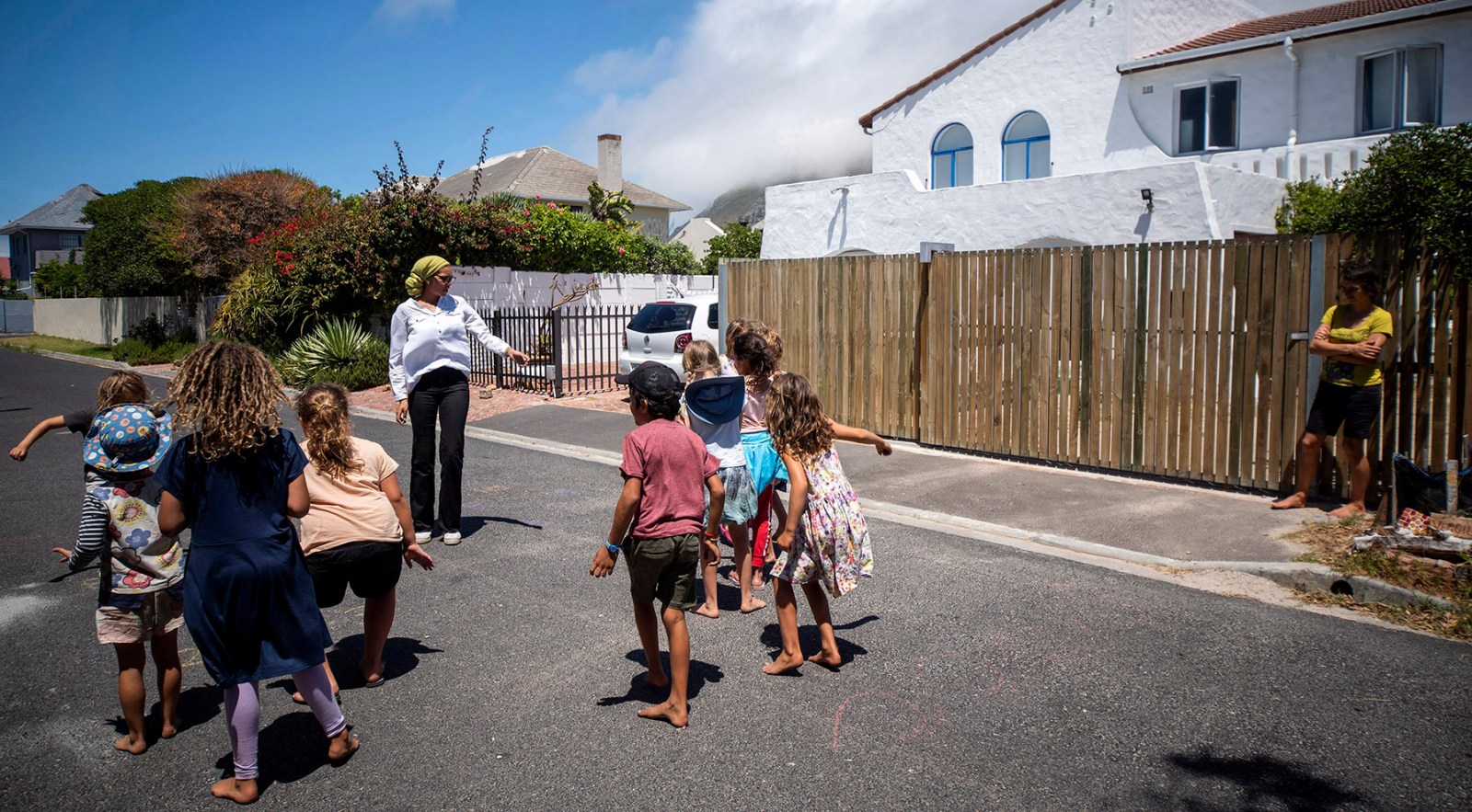 The New Muizenberg School teacher Cailin Booysens plays a game of hopscotch with her class on the quiet road in front of their classroom in Muizenberg, Cape Town. (Photo by David Harrison)

Muizenberg school in catch-22 with no building, no registration and no help from council or province.

In the Cape Town suburb of Muizenberg, teacher Cailin Booysen is encouraging Grade 2 pupils as they dash across a chalk-drawn hop scotch court, in a quiet suburban road. When they are done, the thirteen pupils will resume classes in the converted garage of an adjacent home.

The house in question belongs to Bridget Steffen.

Mother to four — including a seven-year-old boy in the Grade 2 class — Steffen invited Maverick Citizen into her open-plan kitchen, to learn more about The New Muizenberg School, a community schooling collective with classes scattered around the seaside village. The school’s learners and teachers are from all walks of life — homes in surrounding areas including Marina da Gama, Vrygrond, Khayelitsha and Grassy Park.

Steffen’s kitchen smells of freshly baked bread, Black Cat peanut butter and mint tea. She relays how her seven year old son won’t stop knitting. “He is a knitting whizz,” she smiles. As we speak, her ducks Lily and Tree peek in through an open door.

“We are dreaming into something very different, in terms of what schooling needs to look like,” says Steffen. “And we are pioneering, I mean in a way we’re experimenting and figuring it out as we go along. For example, when we’re talking about teachers; we feel it’s very important for children to see themselves in their role models. So having a diversity of teachers is very important to us. In the end it’s about building and creating the South Africa we need.”

Founded in 2015 by local parents, The New Muizenberg School today has six classes with eighty children: a playgroup, a kindergarten class and Grades 1 to 4, each with 12 to 15 learners. Some lessons are taught in rather  unconventional schooling spaces: on the beach, alongside the area’s vlei, in the public swimming pool, the public library, and in Muizenberg’s communal garden.

Whaling explains what is meant by the “holistic education” they strive for: “So I think, we often think of education as putting knowledge into somebody’s head. And so the idea behind what we are trying to do here, is to see learning and curiosity as something that is a part of life. By nurturing curiosity in children, education becomes a lifelong experience.

“So we are creating a school environment that is incredibly generative and loving, helping children to experience and learn at an intellectual level, at an emotional level, at a spiritual level, in a very local and real way. So really drawing upon the natural world around us, the seasons, the beauty of the beach and the mountain, and the whole community. It’s actually seeing Muizenberg as an ecosystem of learning. I mean, you walk down the street with your class and you meet the neighbours. You walk past the shop and the shopkeeper loves it and says ‘hi,’ and give the kids bananas, or whatever.”

The New Muizenberg School doesn’t have a principal or a head teacher. Decisions are made by a “focus group” comprised of seven parents, and seven full time teachers. They also have three additional teaching assistants.

Instead, last year they introduced a sliding scale fee structure where parents pay ten percent of their combined monthly salary. “So the minimum pay is R900 a month and the maximum is R3,300 to R3,500,” says Steffen. “Then we also have some children that don’t pay anything; we fundraise for those children. So I think currently we have six children whose parents are unemployed.”

Whaling takes us on a tour of some of the classes. A few blocks away, the school’s playgroup (2 to 4-year-olds) and kindergarten class (5 to 6-year-olds) are being taught inside a Muizenberg dance studio.

Outside the studio, a stack of surfboards are baking the sun. In a small courtyard flanking the studio, knee-high tables with chairs cater for the kindergarten kids. Teacher Nosisi Dyonase gathers the children around the table, guiding them in song while clapping along.

Inside the studio, the playgroup toddlers are lined up in a row, seated on a step facing the front door. “They are waiting for their parents,” explains teacher Nomonde Mja.

Then she addresses a young boy: “Thato, bring your bag my darling, Gogo is outside!” A tiny girl is twirling about excitedly, lifting a slice of apple to her face.

Next, Whaling leads us over the railway tracks to Muizenberg’s community garden, just off Main Road.

In the garden we walk past gooseberries and tomato plants, while Whaling points out amaranth, a nutritious leafy plant similar to spinach. “This is really popular in Zimbabwe,” she says. “They also use it here at the Muizenberg community kitchen, which prepares meals for, like, R15 each.”

Whaling adds that she teaches most of her nature studies classes inside the public garden, where the Grade 4s — at this point — were enjoying their 30-minute lunch break.

Herding the kids is teacher Shenaye Benjamin. “No sticks!” she warns them. “You don’t want to be blind!” Benjamin explains that their classroom is inside a residential home across Main Road. “It’s a bit stressful to cross the road, but this garden works well for them to be loud and to play,” she says.

Back at Steffen’s house, Steffen and Whaling discuss the big challenge facing the school right now: after being evicted from their premises alongside the vlei for being too noisy last year, the school is effectively homeless. Entering 2022 they had nowhere to house the school, even as the first day of term loomed nearer: January 18. But ingenuity won, as they found a scattering of suitable venues around the village to rent.

“We have needed to trust so much that our community would come together and find spaces as a temporary solution to house us,” says Steffen. “You know, like two weeks before school began, we were still looking for venues. And we were determined to open on Tuesday the 18th. That was our intention, and we did.”

However, this is a temporary solution and they hope to consolidate classes in one venue again, soon.

Steffen says there are several suitable unused government properties around Muizenberg, but that none of the City of Cape Town officials they approached over the course of a year could help them secure access, most of the officials citing bureaucratic complexity as an excuse. They say they asked Muizenberg ward councillor Amy Kuhl for help, to no avail.

“Most of the officials just kind of draw up their shoulders, saying they love our idea — that it’s a great idea — but that they can’t help us,” says Whaling. “Which is strange, as there is a really big need for schools in this area.”

Maverick Citizen approached the City of Cape Town for comment. “Please note that schools fall under the jurisdiction of the Western Cape Education Department. Based on this, please refer your enquiry to them,” said City spokesperson Lisle Brown.

Western Cape Provincial Minister of Education Debbie Schäfer’s office was more helpful. However, spokesperson Kerry Mauchline pointed out that their hands were effectively tied until the school was officially and lawfully registered with the department.

In turn, school teacher Elinor Driver tells Maverick Citizen that they obtained the papers to register the school last year already — but that they were stuck, as, in order to get registered as an independent school, they need to have 20 children under the same roof. Which, due to their circumstances of not having one venue for all the classes, they don’t have right now.

While adults are working on unfurling bureaucratic stalemates; young pupils are laughing, learning to express themselves practising “form-drawing” on Muizenberg’s beach.

Steffen explains that she is from the United Kingdom and that her husband is of Indian Durban descent. “We are a melting pot,” she says. “This is the new generation; it’s the Creolisation of the world, the future. And we dearly want to reflect that in our school.” DM/MC