Achievements of Nadal and rest of ‘Big Three’ make... 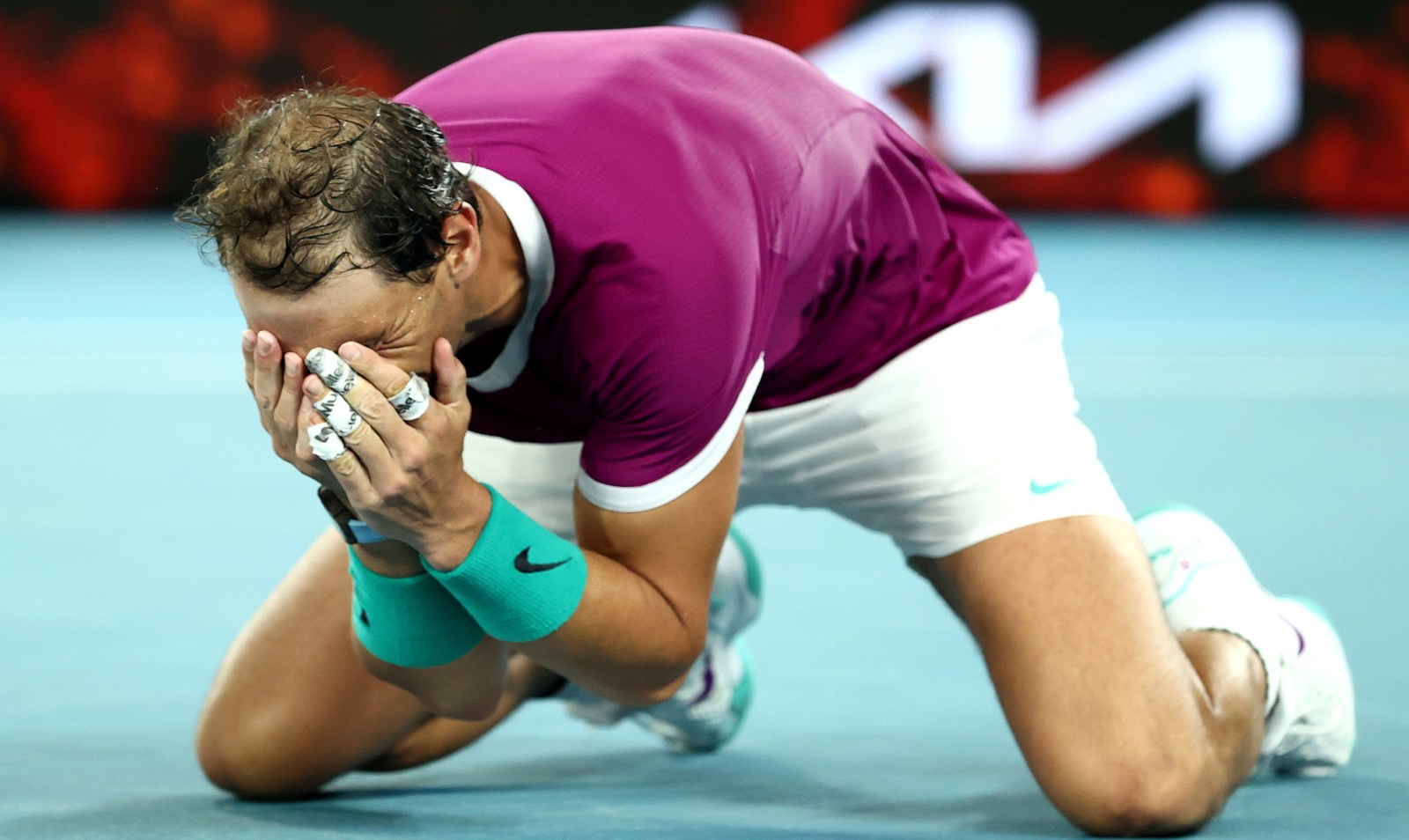 Rafa Nadal’s thrilling come-from-behind performance to win the Australian Open and a record 21st Grand Slam was sport at its best.

Where does Rafael Nadal’s five-hour, 24-minute epic against Daniil Medvedev rank in the annals of not just tennis, but sporting comebacks? That’s impossible to definitively answer, but let’s just say it’s near the top.

An ageing champion, after a year of struggling with injuries and only six weeks earlier unsure whether he would play again, let alone compete, improbably makes the final of 2022’s first Grand Slam.

Nadal (35) beat rising stars such as Karen Khachanov (25), Denis Shapovalov (22) and Matteo Berrettini (25) on his way to facing world No 2 Medvedev (25) in the Australian Open final.

The indefatigable left-hander goes two sets down and 0-40 on his serve in the third set, against a man who is emerging as the best of the chasing pack to the sports “Big Three” of Nadal, Roger Federer and Novak Djokovic. It’s game over surely?

Nadal somehow finds not only the physical reserves, but the mental fortitude to reset and start again. Medvedev doesn’t fold physically, but somewhere during the latter stages of the contest, he loses it mentally.

Despite hitting great shots and matching Nadal, once Nadal rallied to win that game from 0-40, there was a feeling of inevitability that the Spaniard was in control of the match, if not the scoreboard. Once the momentum turned Nadal’s way, the contest inexorably moved to the only conclusion it could.

Rafa would find a way to win because with each passing minute, point, game and set, it gradually dawned on the guy on the other side of the net that despite his ranking, he was playing against a winning legacy.

Medvedev might not even know when it happened, or even have been aware that it did, but at some point late in the match, he accepted defeat. Rafa had morphed from a fragile, ageing champion into a tennis version of a Death Eater in front of Medvedev’s eyes. And the monster slowly broke the Russian’s will.

Tennis is one of the most gladiatorial sports. From club level to the elite stages of the world, it pits two people against each other in single combat. There is no one to help you and nowhere to hide. They hit, you respond and eventually, after trading blows one competitor is left standing.

Medvedev, and the others Nadal slayed along the way, are much younger, are almost certainly fitter (especially against Nadal still overcoming a foot injury) and at least as well coached. They have been raised watching the Big Three play. The young bucks chasing the trio, and in this specific case Nadal, lacked no technical and tactical information about the opponent they faced.

Nadal has been on the Tour for 20 years and there are thousands of hours of footage of him playing on every surface, in different conditions. He has been around the locker rooms of the world, talking to players, sharing his knowledge. His coaches speak to other coaches. There is literally nothing unknown about Nadal the tennis player because the data are out there.

But it’s the intangible nuances in sport that make it compelling. Almost without exception, in sports that last hours, involving technically and physically matched competitors, it’s something in the mentality that ultimately separates the winner and the loser.

Every elite player out there has a supreme will to win, otherwise they wouldn’t be near the top of the game. But even within this phalanx of ego and “winners” there is a hierarchy. Nadal, Djokovic and Federer are outliers because they continue, deep into their thirties and early forties, despite all their success, to find a way to mine the winning seam.

They don’t need to win, if winning is simply measured in material terms. They have each won in excess of $125-million in prize money on Tour and at least earned that much again in endorsement income. And they certainly don’t need to win more Grand Slams to secure their status and legacy in the sport, but they know no other way. To play is to win.

Nadal will never lose for lack of effort and will push himself beyond limits only he understands in an attempt to win, and only he knows what stokes that smouldering competitive fire inside him.

The courts of the world have been ruled by Federer, Nadal and Djokovic for two decades. They’ve driven each other to greater heights with 61 of the last 76 Grand Slam singles titles since 2003 between them, or 80% of them.

In the wake of this superb win to claim his 21st Grand Slam singles title and move one ahead of Federer and Djokovic, Nadal’s reflections were as if it somehow happened by accident. Certainly, it has been fortunate that the careers of three of the best players ever to pick up a racquet have intersected, but it’s not luck that it has lasted nearly 20 years. They have motivated and frustrated each other in equal measure.

“In some way we achieved more than what we ever dreamed when we were kids,” Nadal told the media the day after winning in Melbourne.

Before Sunday, Nadal had made five Australian Open finals and lost four. Perhaps the most revealing reflection of his 2022 triumph was how Nadal referenced his previous losses in Melbourne – as if the pain of those defeats can never quite be erased by the glory of his win over Medvedev.

“I tried very hard during all my career here in Australia,” said Nadal. “Finally, in probably the most unexpected year for me, I achieve one more time this beautiful trophy.

“I remember the final with Roger [in 2017]. And the final with Novak in 2012 – it was longer than this year, but I was more prepared. I was 10 years younger and at the same time I was able to [practise correctly] before. This year was different, I was not ready to hold matches like yesterday, but I did my best, did 100%. Very proud and in some ways very lucky.”

Nadal might feel lucky but really the luck is all ours, as sports lovers. Nadal’s career, which has been elevated by the exalted company he keeps alongside his two main rivals, has created a sport that makes all of us who enjoy it, really feel like the lucky ones. DM