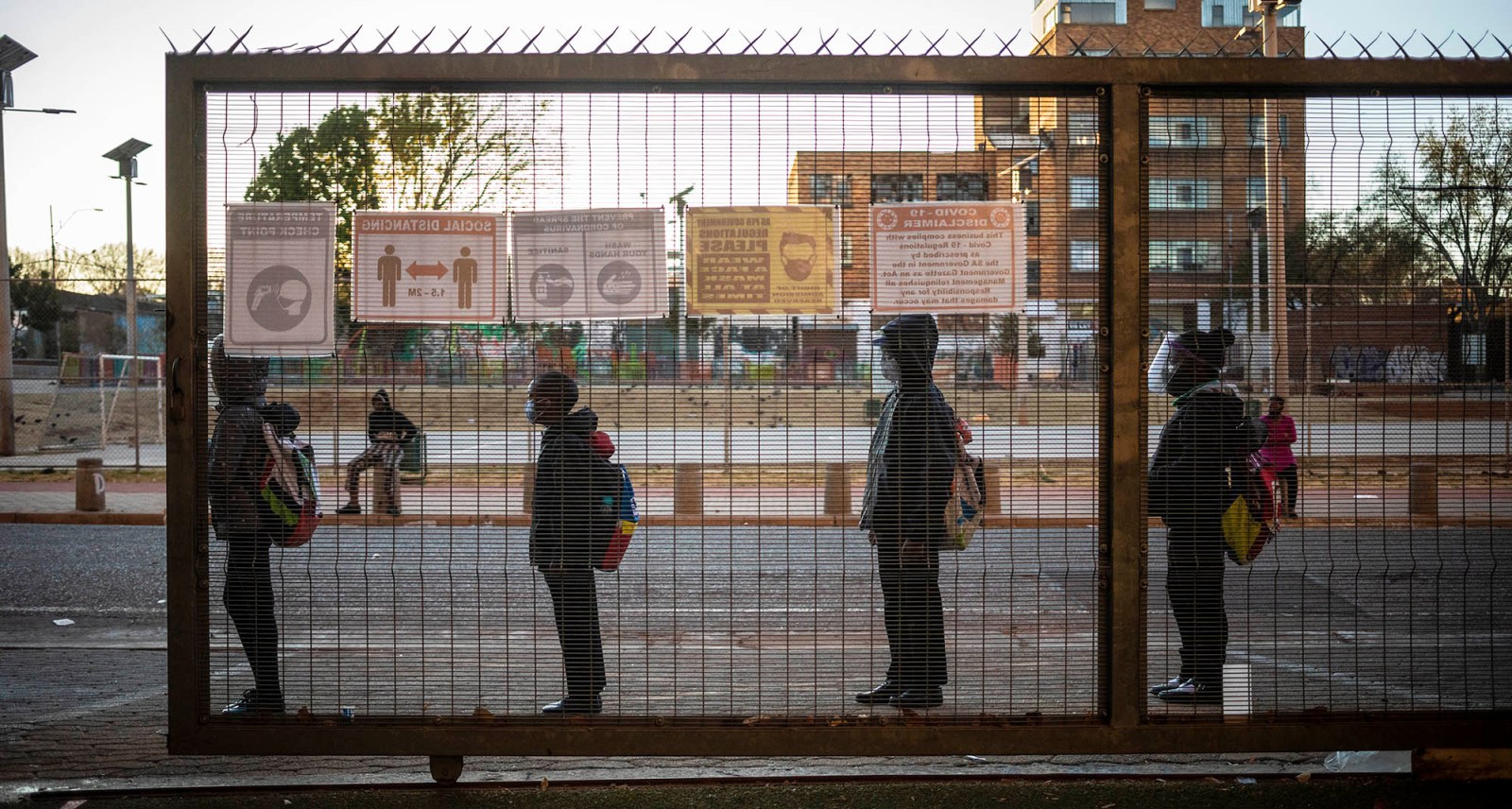 Children wait outside the school gate while wearing protective clothing in the form of masks and face shields as part of their safety due to the Covid-19 coronavirus pandemic, in Johannesburg, South Africa, 13 August 2020. (Photo: EPA-EFE/KIM LUDBROOK)

Following pressure to align regulations with the current state of the coronavirus pandemic, Cabinet has announced that people who test positive for Covid-19 but don't show any symptoms will no longer have to isolate. Pupils can now return to school full-time, meaning life will start to return to normal for young people who have been hard-hit by the lockdown.

The coronavirus pandemic and resultant lockdown has been particularly damaging for school-aged youth, many of whom lost huge amounts of learning time, have been cut off from their networks of friends, and in some cases, have gone hungry as the government first shut down schools and then imposed a system of rotational learning.

On Monday, Cabinet announced amendments to the Level 1 lockdown regulations that suggest the executive has responded to pressure and is continuing to take a more pragmatic approach to the pandemic after the country has exited its fourth wave, which saw fewer hospitalisations and deaths than previous waves.

In late December 2021, curfew restrictions, criticised as unnecessary as hospital admissions dropped during the Omicron wave, were scrapped. The latest amendments to the Covid-19 regulations follow the trend as the government switches to rebuilding the economy and returning life to normality while pushing vaccinations rather than lockdown restrictions.

In a brief press release on Monday, Minister in the Presidency Mondli Gungubele announced Cabinet had decided that full-time learning in schools would resume for the first time in almost two years and that those who test positive to Covid-19 but don’t show any symptoms are not required to go into isolation.

“Based on the trajectory of the pandemic and the levels of vaccination in the country, Cabinet has decided to make the following changes to Adjusted Alert Level 1 with immediate effect,” said Gungubele’s statement before outlining the new isolation requirements.

He then turned to schooling: “Primary, secondary and special schools will return to daily attendance. The regulatory provision for social distancing of one meter for learners in schools has also been removed.”

Those two sentences will have a significant impact on learners’ lives and their educational achievements. All schools were initially closed during the hard lockdown. When they were allowed to reopen, physical distancing requirements were enforced, meaning overcrowded schools had to adopt rotational learning schedules where students would attend school on some days and stay home on others.

It had devastating effects and in June 2021 the Ministerial Advisory Committee (MAC) on Covid-19 recommended fully reopening primary schools, even when they couldn’t adhere to distancing advisories. The DA recently lodged a court application to compel the government to fully reopen all schools.

In court papers filed in the case regarding the African Christian Democratic Party’s (ACDP) attempt to stop 12- to 17-year-olds from getting vaccinated, public interest law group Section27 cited the National Income Dynamics Study — Coronavirus Rapid Mobile Survey (Nids-Cram), which found that between March 2020 and June 2021, primary school learners lost 70% to 100% of learning compared to the 2019 class. Students at fee-free schools were most severely affected as they could not easily move to online learning.

Section27 led the legal fight to ensure the National School Nutrition Programme (NSNP), which provides meals to millions of poor learners, continued in some form during the lockdown. It won that battle but provided evidence to show the government, despite its legal obligations, had failed to ensure students received their meals while at home during rotational learning.

The public interest law group provided further expert evidence in the ACDP case to show how the mental health of pupils suffered while they were away from school and how teenage pregnancy had risen during the pandemic while students could not attend school full-time.

As recently as 11 January 2022, Education Minister Angie Motshekga, who claimed she was acting “entirely” on advice from experts, the MAC and the National Coronavirus Command Council (NCCC), said rotational learning would continue as “Covid-19 is very much still with us”.

Some of the country’s most prominent experts on Covid-19, including Francois Venter, Marc Mendelson and Shabir Madhi, however, said full school schedules should return.

“Children experience only a very small chance of harm from infection with SARS-CoV-2, except for those under one year of age or in the presence of underlying medical conditions. Children suffer illnesses from influenza and a range of other viruses and infections too, and we sent them to school prior to this pandemic, understanding the massive benefits to child health and development,” they said, while recommending vaccine mandates for educational staff.

“Furthermore, keeping children out of schools inflicts harm to the social/financial fabric of the household when carers have to stay home to mind the kids,” they continued.

The department of health announced a similar move in December 2021, recommending contacts of people who had tested positive for Covid-19 and people who tested positive but who were asymptomatic should continue with their normal lives.

The department reversed its decision following criticism, but before it did so it said the move was taken because many people had some form of immunity, whether from the vaccine or exposure to the virus, and quarantine meant they might “lose their income and valuable school time while staying at home without symptoms”.

The regulations announced on Monday went even further. The isolation period for those who test positive but show symptoms has been reduced from 10 to seven days and people who have been in contact with others who have tested positive are not required to isolate unless they develop symptoms.

The move follows measures introduced by other countries, most notably, the United States. Days before it was announced, Madhi, Mendelson, Venter and their colleagues advised:

“Ten days came from original data which suggested that peak infectiousness was from one to three days pre-symptoms until eight days post the onset of symptoms. Recently, a number of countries, including the US, have shortened the isolation period to five days from test or symptom onset. We believe the US CDC’s more pragmatic approach of five days isolation, with a return to work and society using a mask for the next five days, is sound. Even more pragmatic is to limit isolation only if a person is symptomatic.”

Cabinet didn’t go as far as implementing the five-day isolation the US, which is beset by labour shortages due to Covid-exposed staff having to isolate, has adopted but its amendments suggest it’s in tune with expert advice and the changing global approaches.

While future variants of Covid-19 are expected to have a similar impact as Omicron, vaccinations will still remain key in policy decisions.

“Government commends all South Africans who continue to observe Covid-19 regulations and protocols. We also remind those who are yet to get vaccinated to go for their Covid-19 vaccination and continue observing basic health protocols to prevent the transmission of the virus,” said Gungubele.

Vaccination mandates, in some form, will likely be key to the government’s approach. President Cyril Ramaphosa has said little about the issue since November 2021 when he announced a task team would discuss possible mandates with different sectors of society. Employers already have the right to dismiss employees who refuse to get vaccinated and don’t meet exemption caveats, which was recently enforced by the CCMA.

According to the latest data, 46.5% of adults in South Africa have received at least one dose of a Covid-19 vaccination. The National Institute for Communicable Diseases said 1,366 new cases and 71 deaths coronavirus-related deaths were recorded on Monday. Officially, 95,093 people have died due to coronavirus. Studies of excess death rates, however, suggest that figure is much higher. DM