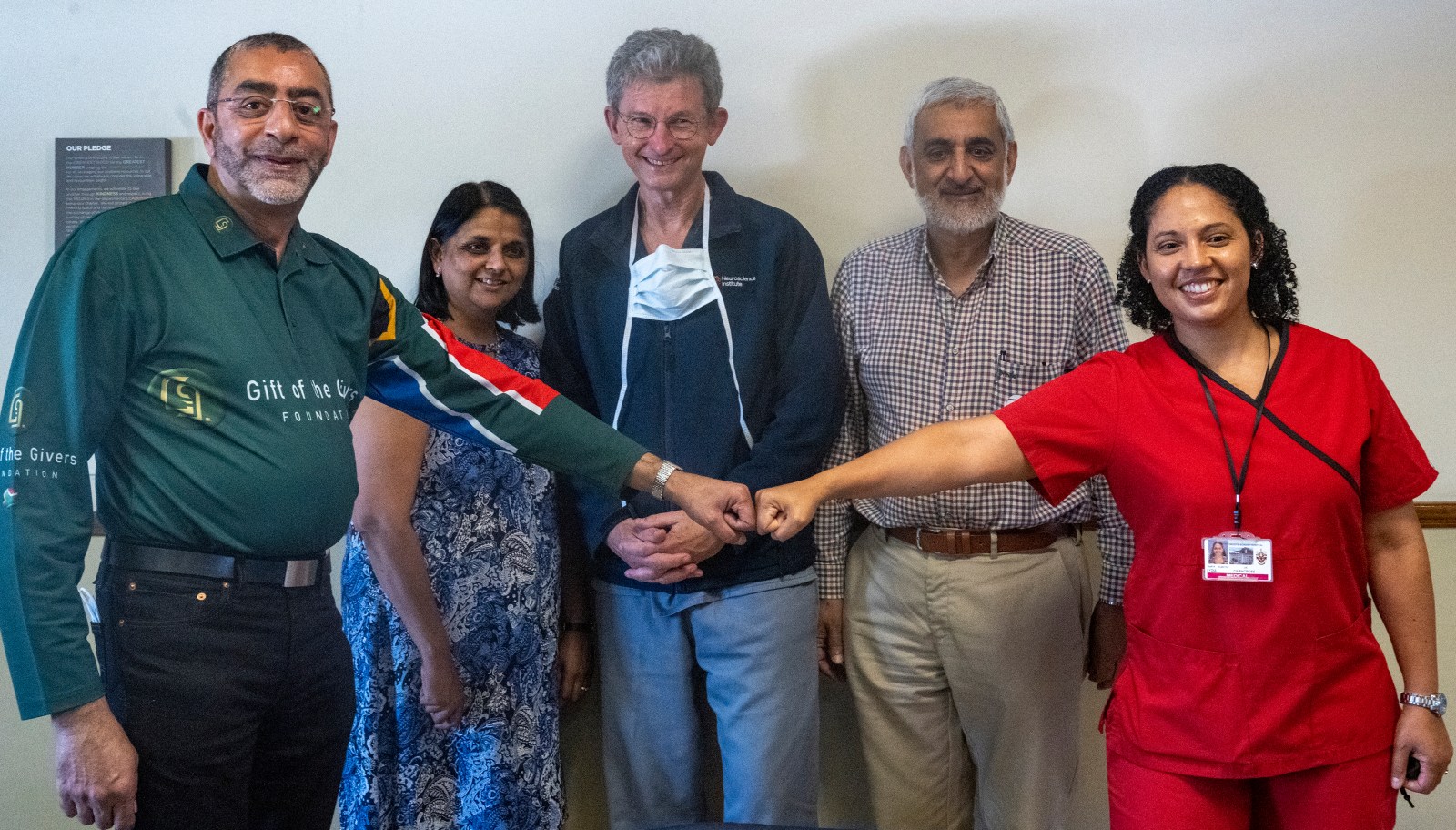 Owing to the Covid-19 pandemic many thousands of patients couldn’t have surgical procedures. Now, the Surgical Recovery Project allows everyone to help fund a solution.

Just after the first Covid-19 lockdown in South Africa, Tracey Misplon, a single mother of three, began experiencing physical pain and discomfort. She visited her local clinic, but like many others, found herself sidelined amid the pandemic’s disruptive impact on the healthcare system. It was a year before she was referred to a specialist.

Misplon was later referred to surgeons at Groote Schuur Hospital, where she was diagnosed with a large paraoesophageal hernia and slow-bleeding ulcers, but she has not yet been able to receive the surgical care she needs. She has been waiting for an operation since September 2021, while growing weaker and more anaemic.

“The medication that I was on to help my stomach doesn’t work anymore. It’s become a dangerous situation, because if one of those ulcers rupture, and I’m severely anaemic, it could be fatal,” said Misplon.

“I don’t give a damn about Covid. I’m more scared about what’s going to happen to me, with my current condition… because anything could happen at any time.”

Misplon’s struggle is shared by many South Africans. In the past two years, hospitals such as Groote Schuur in Cape Town have had to curtail outpatient services, limit admissions and reduce the number of surgical procedures, according to Dr Bhavna Patel, the hospital’s CEO.

Since 2019, Groote Schuur has had to reduce the number of operating theatres in use by 40%, Patel said. This was largely because of the reallocation of staff to Covid-19 wards and ICUs. Between 10,000 and 15,000 patients were unable to get surgical operations in this time, she said.

“We were not only kept busy treating very sick Covid patients, but we also had staff who became ill, staff who had to deal with their sick families. Many of us staff lost family members.”

The postponement of some operations during the pandemic was necessary, according to Lydia Cairncross, head of general surgery at Groote Schuur Hospital. “Operating on patients who have Covid-19 is very dangerous for the individual patients, and we also needed to use our resources to save thousands of lives at the time.”

With the country now moving into an “inter-Covid phase”, Cairncross emphasised the need to find ways for healthcare to recover. However, addressing the backlog in surgeries remains difficult within a health system at full capacity.

“When we go back into our normal systems, with new people coming in with new problems, needing operations again, and those that have been waiting in the wings are still waiting,” said Cairncross.

It is against this backdrop that Gift of the Givers has partnered with the Groote Schuur Hospital Trust to address the backlog of surgical procedures at the hospital.

On 25 January 2022, the trust announced a campaign to raise funds for the Surgical Recovery Project, which aims to provide 1,500 procedures to patients waiting for operations over the next year.

“For one year, we would like to add capacity to our system to address this backlog. In this project, we would like to use a space, our E4 ward, which was created and built to provide surgeries to the patients of this hospital,” said Cairncross.

There are currently more than 6,000 patients awaiting essential surgery at Groote Schuur, some of whom have been waiting for months or even years. Their conditions range from chronic joint pain to cataracts, from urinary retention to cervical and ovarian cancer, according to Cairncross.

“The list is heartbreakingly long, and… as the waiting times lengthen – which they have during Covid, they’ve lengthened and lengthened – the desperation mounts.”

The Surgical Recovery Project aims to raise R15-million, which will allow about one operation for every R10,000 donated, according to Cairncross.

The money would go towards employing a team to run the additional theatre, including nurses and anaesthetists. However, the physical space and equipment costs would be covered by the hospital and the Western Cape Department of Health, she explained.

“The actual surgical lists will be run by our surgical consultant staff, employed by the hospital. So, we will within our teams make an arrangement to stretch more during the week in order to cover those [operations],” said Cairncross.

Of the R15-million, R5-million has already been donated by Gift of the Givers. Dr Imtiaz Sooliman, founder of the NGO, commended the hospital’s management team for their “determined” and “forward-thinking” approach to the project.

“They’re now creating a standard or a template, which other hospitals in the country can follow,” said Sooliman. “This project has to work, there is no choice… because it has to set an example for the rest of the country to follow.”

Sooliman called on the government, corporations and the public to support the initiative, and challenged private hospitals and clinics with space to spare to take on patients from the government service.

One member of the public, Zaheer Parker, is planning to use his upcoming Otter Trail hike to raise money for the project. Those in his hiking group will call on their social networks, contacts and families to build awareness of the initiative. The 12 hikers hope to raise R100,000.

“I feel a personal sense of community in terms of, if we can help these people get back to health… and get back on their feet, it elevates our event.”

Groote Schuur patient Natashé Serra is optimistic about the outcomes of the project. She has lived with a stomach hernia for about six years, but her condition worsened just before the onset of the pandemic.

“It’s been really bad. To be honest with you… more than half of my stomach is sitting on my left lung, so I’ve lost over 30kg,” said Serra.

The hernia has forced Serra to change her eating habits, since too much food or heavy meals can cause vomiting. “[The project] could change my life… and not just for myself, for my kids. I’m a single parent, and my kids need me to be healthy.

“It’s important that members of the public realise, this could be anybody,” added Serra, on the value of contributing to the project.

“[I]t could be their immediate family, it could be their neighbours. For all they know, they might not even know… maybe someone… that is close to them is waiting on an operation.” DM168