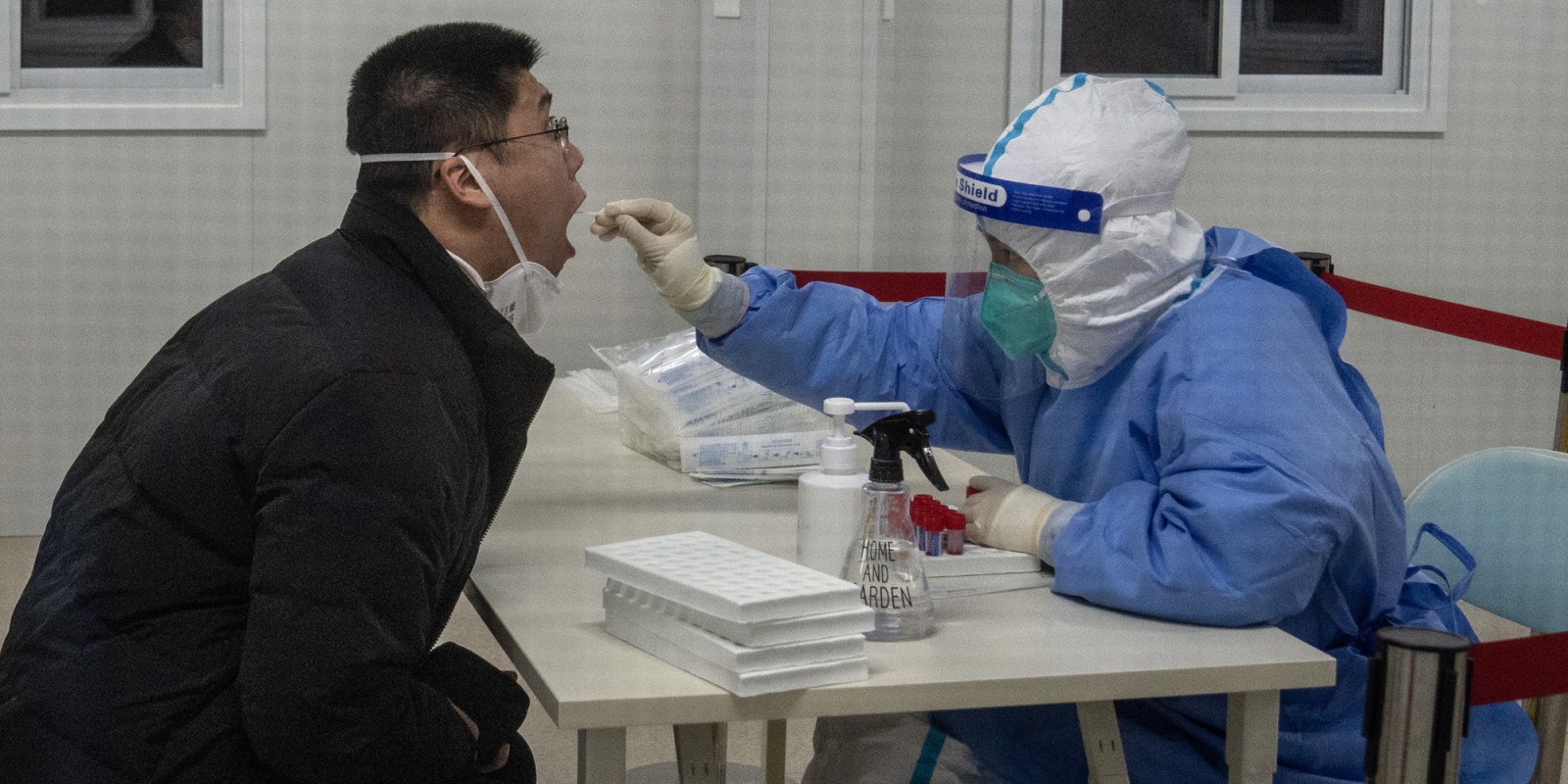 Pfizer’s Covid-19 pill received backing from the European Union’s drugs regulator, offering a tool to manage infections at home and ease the burden on hospitals.

Denmark said the virus is no longer a threat to society. Germany’s cases surged still higher, with the country’s health minister expecting a peak in mid-February. Some supermarkets and train operators in England will continue to ask people to wear masks even after curbs have been dropped, The Times reported.

Hong Kong, with one of the world’s most stringent Covid policies, is shortening its quarantine period for inbound travellers to 14 days, Chief Executive Carrie Lam said. 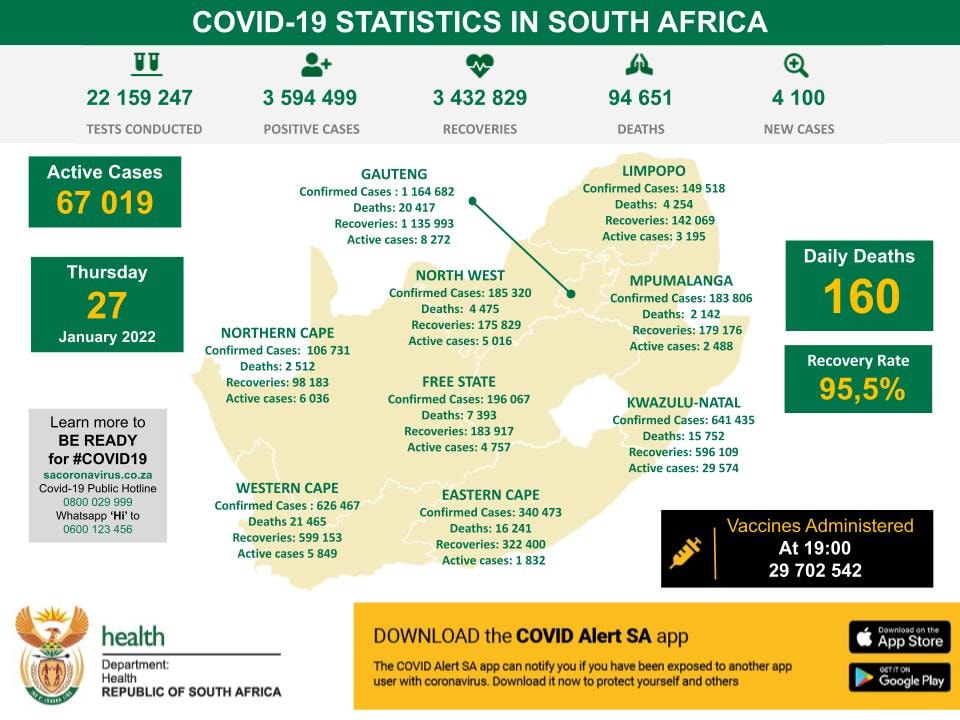 A third dose of mRNA Covid-19 vaccine provided more protection against hospitalisation during the rise of the Delta variant compared with two shots, according to a US government study.

Vaccine efficacy for adults who received a booster dose made by Moderna or partners Pfizer-BioNTech  was as high as 88% for those with weakened immune systems and 97% for those without such conditions, according to a US Centers for Disease Control and Prevention analysis. After just two doses, the vaccines were 69% effective in immunocompromised people and 82% effective in otherwise healthy recipients, according to the data which analysed almost 3,000 hospitalised adults.

The results were gathered between August 19 and December 15, when Delta was still dominant in the US, and efficacy against Omicron is likely to be lower, the researchers said. Studies have shown that three doses of mRNA vaccine give better protection than just two against severe disease caused by Omicron.

Booster vaccines are a strong shield against Covid-19 hospitalisations and deaths due to the Omicron variant, the latest data out of the UK showed.

Protection against death with Omicron was about 60% roughly six months after a second dose of any Covid vaccine, a figure that soared to 95% two weeks after a booster, the UK Health Security Agency said on Thursday. The results mirrored what’s been seen in large studies out of the US

Vaccines were also able to keep infected people out of the hospital, even months after a booster dose. The Pfizer-BioNTech vaccine showed about 75% effectiveness against hospitalisation by 10-14 weeks after a booster dose, the UK agency said. Up to nine weeks after a Moderna booster, vaccine effectiveness against hospitalisation was 90% to 95%. These figures may change with time, the agency said.

Music to return to Greek bars amid easing

Greece will start to ease some restrictions such as allowing music to be played in bars and restaurants and extending their opening hours, Health Minister Athanasios Plevris said on Thursday. Customers must still remain seated.

While pressures remain on the country’s health service, there is a balance between the number of people being hospitalised with Covid-19 and those released after recovering, he said. The length of time spent in the hospital is also less for patients with the now dominant Omicron variant than for the Delta variant, he said.

Women who had received at least one dose during their pregnancy and who gave birth between January and October last year were more likely to see no adverse outcomes at birth, compared to their unvaccinated counterparts, according to the latest research published by the UK Health and Security Agency. The difference was most observable for those aged 30 or above.

Previous studies showed unvaccinated women have a higher risk of developing severe illness from Covid-19. Vaccination rates for pregnant women have almost doubled between August and October, but remain low compared to uptake in the general population in the same age group.

Pfizer’s Covid-19 pill received backing from the European Union’s drugs regulator, offering a tool to manage coronavirus infections at home and ease the burden on hospitals.

The European Medicines Agency’s expert committee recommended granting a conditional marketing authorisation for the antiviral, called Paxlovid, for adults with Covid at risk of developing severe illness. The agency said in December that the treatment could be used by adults, in advance of formal approval.

Hong Kong will cut its quarantine requirement for inbound travellers by a week and extend a ban on people coming from eight countries as a record number of infections tests the city’s infrastructure.

The shorter quarantine period will begin from February 5, and will see travellers stay in a hotel for 14 days and then undertake seven days of self monitoring, Chief Executive Carrie Lam said at a briefing on Thursday. She also said the ban on flights from locations including the US, UK, Australia and the Philippines will continue until February 18.

UAE best place to be in the pandemic

The United Arab Emirates (UAE) is back at the top of Bloomberg’s ranking of best places to be in the pandemic. Its success is based on an approach it has been following for months: a combination of almost full vaccination coupled with consistent openness to travel, alongside what has been a smaller Omicron outbreak than elsewhere.

Ruling out a return to full lockdown, the UAE economy is poised for strong economic growth this year helped by the rebound in oil prices.

Beijing added five Delta cases as total Covid infections rose to 80 since January 15, according to a local government briefing. Authorities added 74 cases are due to the Delta variant and six due to the Omicron variant.

Denmark will end virus restrictions next week and reclassify Covid-19 as a disease that no longer poses a threat to society, even as infections hit a record high. The decision echoes an idea that it’s time to start thinking about Covid as endemic rather than a pandemic.

The easing of curbs also echoes recent moves elsewhere in Europe – including Ireland and the UK – to scale back restrictions amid signs that Omicron is less dangerous than earlier variants of the virus.

Israel will offer a fourth dose of vaccine to adults who have pre-existing medical conditions, are at risk for severe illness, or have “significant exposure” to infection due to their jobs. Until now, only those aged 60 and older were eligible for a fourth shot.

Tokyo is undergoing “an explosive infection situation” due to an Omicron-fuelled wave that is pushing daily numbers to record levels, a medical expert told a metropolitan government advisory panel on Thursday.

Norio Omagari, director of the Disease Control and Prevention Centre at the National Centre for Global Health and Medicine, told the panel that if current trends continue, newly recorded daily infections will exceed 24,000 in a week. Daily reported new cases in Tokyo hit a record 16,538 on Thursday.

Sainsbury’s, Waitrose and John Lewis are among shops where customers in England will still be asked to wear masks even as curbs were lifted, The Times reported. People on London’s public transport network will still be required to wear face coverings, with Mayor Sadiq Khan calling on people to “do the right thing”.

Germany reported more than 200,000 new infections in one day for the first time, with Health Minister Karl Lauterbach expecting the latest wave to peak in mid-February. For the time being, hospitals are not coming under the same pressure as in previous waves.

Prime Minister Narendra Modi’s government will revisit its plans to administer a booster shot for all age groups after its scientific experts doubted its effectiveness in preventing the virus spread, the Times of India reported, citing unnamed officials.

China’s Omicron outbreak spread to its major e-commerce hub, with at least seven infections detected in Hangzhou, a city near Shanghai and home to Alibaba Group Holding and fintech giant Ant Group.

The major port city of Tianjin reported one new Omicron infection just a day after cases had dropped to zero, while nearby Beijing continues to grapple with a worsening Delta cluster that’s centred on cold-storage facility workers.

The cases come just days away from the weeklong New Year break that typically sees hundreds of millions of Chinese people traverse the country to visit their families.

South Korea reported 14,518 daily new cases, the third straight day of record numbers and nearly double the peak from last month. Health officials said infections may reach 30,000 a day in February, as Omicron continues to spread. There were 34 deaths and 350 patients in critical condition, the lowest since early November. DM/MC