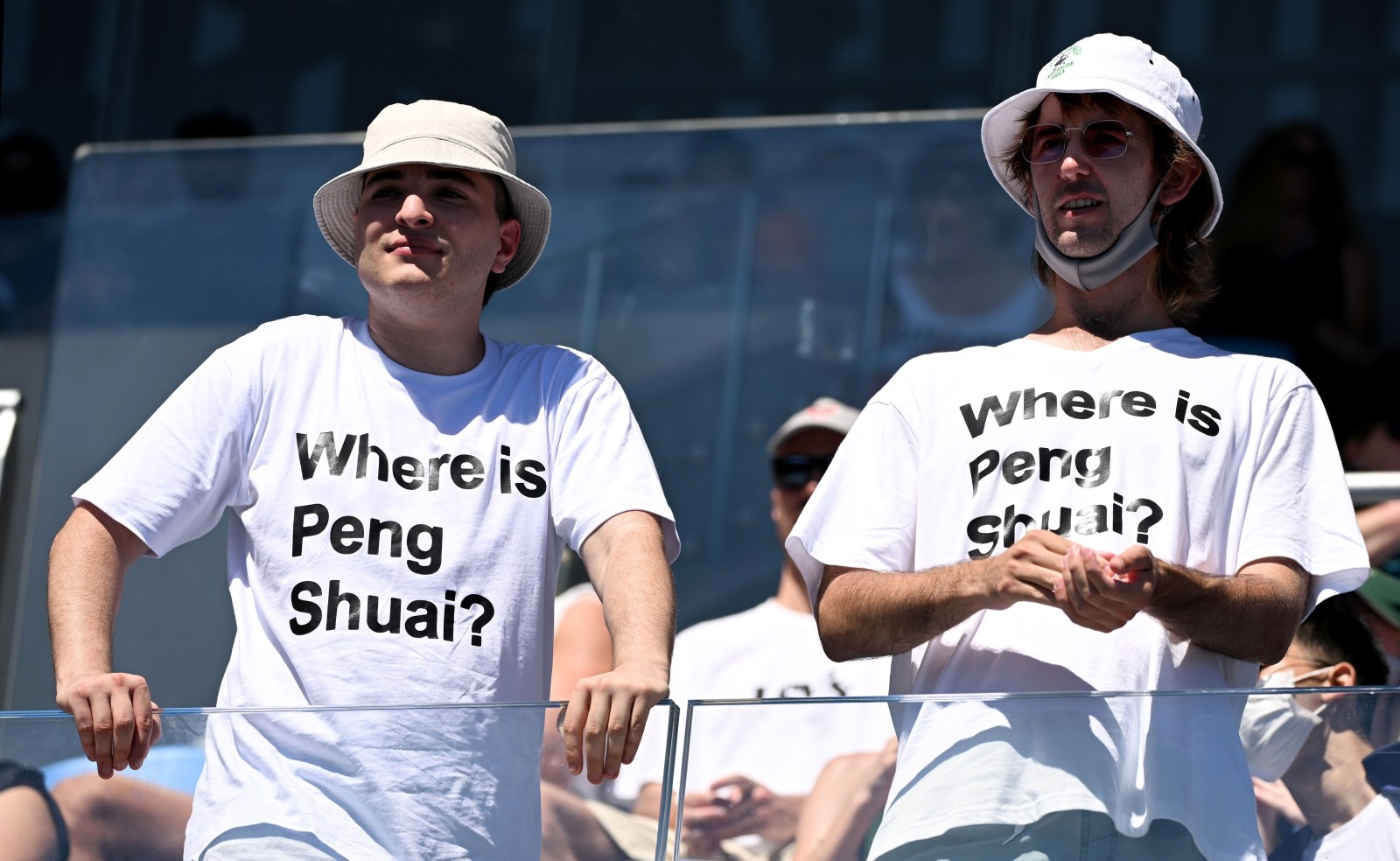 Spectators show their support for Chinese player Peng Shuai before the men's doubles quarterfinal between Nick Kyrgios and Thanasi Kokkinakis of Australia and Tim Puetz of Germany and Michael Venus of New Zealand at the Australian Open at Melbourne Park on Tuesday, 25 January 2022. (Photo: EPA-EFE/Dave Hunt)

Months after her disappearance and with ongoing concerns about the whereabouts and safety of Chinese tennis player Peng Shuai, Australian Open organisers did an about-turn on fans’ messaging about the incident.

Fans are free to wear “Where is Peng Shuai?” shirts at the Australian Open but they must not become “disruptive”, Tennis Australia chief Craig Tiley told Reuters on Tuesday amid criticism of the Grand Slam organisers’ earlier stance on the issue.

In response to a video posted on social media on Saturday of security officials instructing fans to remove shirts with the slogan on them, the governing body said the Melbourne Park tournament does not allow political statements.

Tennis legend Martina Navratilova described that reaction as “cowardly” and said Australian Open organisers were giving in to China and placing sponsorship money ahead of human rights concerns.

“Unfortunately, I think there’s a lot of miscommunication and lack of understanding on it, because it’s not just a one-line response,” Tiley said.

“Someone wearing a T-shirt saying something is not going to have any impact on the safety. But when they start getting together as a group, as a mob, and start being disruptive, in any way or form, that’s a different thing.

“If they’re coming in to do what everyone else is doing – to enjoy the tennis – and if they’ve got a T-shirt that says ‘Where is Peng Shuai?’, that’s fine.”

Peng’s situation became a matter of concern in November when the former No 1 women’s doubles player alleged that a former Chinese vice-premier, Zhang Gaoli, had sexually assaulted her in the past. After that post, she was absent from public view for nearly three weeks.

Last month, Peng said she had never accused anyone of sexually assaulting her, and that a social media post she had made had been misunderstood.

Zhang has not commented on the matter.

Referring to the Peng shirts at Melbourne Park, a Chinese foreign ministry spokesperson said on Monday that “such behaviour is unpopular and will not succeed”.

Tiley said the steps taken by security staff last weekend were based on suspicions over “the motive and intent of the person coming in”.

“If they are coming on site to specifically disrupt the comfort and the safety of our fans, then we don’t welcome them,” he said.

“If they continue to be persistent, they will be removed from the site, but if someone wants to wear a T-shirt supporting Peng Shuai, that’s fine, or doing other things, that’s also fine.”

On Monday, Peng supporters in Australia said they were planning to hand out 1,000 “Where is Peng Shuai?” T-shirts at Melbourne Park this week after raising more than A$10,000 (R110,000) on a GoFundMe page.

The Women’s Tennis Association (WTA) has suspended tournaments in China due to its concerns over Peng’s safety and Tiley said Tennis Australia backed their stance.

“Right at the beginning when Peng Shuai’s whereabouts were not known we worked closely with the WTA to utilise our resources in the region, to support the WTA,” he said.

“We were concerned about Peng Shuai’s wellbeing from the beginning and wanted to make sure she was okay. Obviously since that time, she’s now made some statements, but we also support the WTA’s position on it.” DM/Reuters