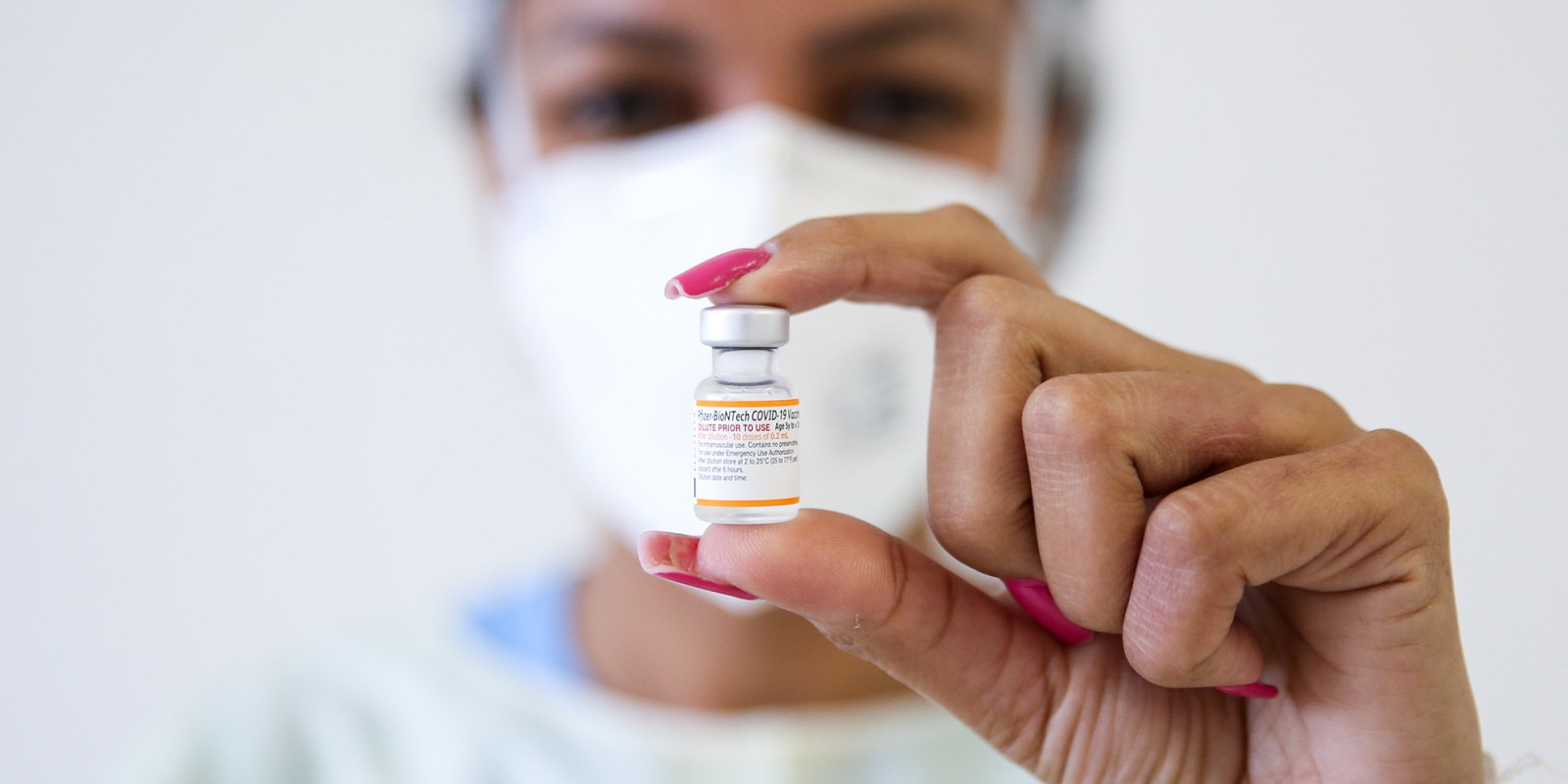 Scientists call on the Gender Commission to withdraw its statement, engage with the relevant institutions, societies and experts and replace it with one that truly addresses Covid-19 reproductive health concerns.

On 16 January, the Commission for Gender Equality issued a statement titled “Gender Commission on imposing mandatory Covid-19 vaccination”, in which it noted a study published in the Journal of Obstetrics and Gynaecology earlier in the month that found vaccines cause a small, but temporary change in menstrual cycle length. In the article, the commission misinterprets the paper and also fails to consider the many other harmful impacts associated with Covid-19 disease and reproductive health that make immunisation a priority for women of childbearing age.

Using this study as justification and ignoring the study’s reassuring conclusions, the Gender Commission cautioned businesses and institutions against forcing employees to vaccinate and recommended against imposing sanctions against them if they did not vaccinate against Covid-19.

It further warned that mandatory vaccination mandates do not supersede South Africa’s Constitution and its provisions and that “Maintaining public health, reaching herd immunity, and preventing mutating Covid-19 variants are noble acts but should not be achieved by trampling the basic human rights that are enshrined in the Constitution.”

The commission specifically noted that the large numbers of young females employed as cashiers and cleaners in South Africa’s retail sector were unable to negotiate with their employers, should they not wish to vaccinate.

In addition, it called for institutions of higher learning to “afford the same respect to students and workers who may not wish to vaccinate”. It further stated that many students and workers were not empowered to negotiate with big corporates and institutions and attributed this shortcoming to the country’s legacy of oppression, economic inequality and limited access to information.

The commission underscored that section 12 (2) of the Constitution on the rights to bodily and psychological integrity, which include the rights to make decisions concerning reproduction; to security in and control over their body; and not to be subjected to medical or scientific experiments without informed consent could not be infringed.

However, the Gender Commission, in its misunderstanding and hence misrepresentation of the study’s findings, asserts that due to possible long-term effects from what it describes more broadly as a scientifically established connection between Covid-19 vaccinations and women’s reproductive health, many women may not be comfortable taking vaccines.

In so doing, the commission ignores the fact that, as explained below, Covid-19 itself poses an enormous threat to women’s reproductive health, and that addressing the low vaccine uptake among women of child-bearing age is both ethically imperative and a human rights obligation for the protection of their reproductive health in the ongoing pandemic.

Unfortunately, such messaging compounds young peoples’ concerns regarding fertility and Covid-19 vaccination, which is unfounded in published literature and undermines vaccination efforts. Low uptake of Covid-19 vaccination in pregnant and breastfeeding women in public health facilities remains a concern and frequently stems from healthcare workers themselves not following recommended guidance due to their own beliefs and misperceptions.

In publishing an article like this, the Gender Commission seems oblivious of the danger of the assertions made in its statement — that “the enthusiasm of women of reproductive age for receiving a Covid-19 vaccine may be negatively curbed especially in light of currently circulating anecdotal claims of the vaccines adversely affecting fertility and pregnancy”.

Rather than debunking these contentions and reassuring the women, it claims that there is no available scientific evidence to support such assertions, it causes further harm to them by issuing cautions and warnings based on false information and a misreading of the science.

It is unclear how the commission has come to the conclusion that reproductive health is negatively affected with regard to a less than one-day change in cycle length that corrects itself the following cycle. While some studies have noted menstrual changes after mRNA and adenovirus vectored Covid-19 vaccinations, menstrual lengths return to normal with the following cycle. Moreover, in a study of menstruating women, it was found that a quarter of those that had been infected with SARS-CoV-2 experienced menstrual disturbances. There is no evidence that the use of Covid-19 vaccines adversely affects women’s long-term reproductive health.

Of note, there is currently no evidence that Covid-19 vaccinations cause infertility (see Association of Reproductive and Clinical Scientists, British Fertility Society, Covid-19 vaccines and fertility, 2021 here, an article in the Journal of Obstetrics and Gynaecology here) and in clinical trials, unintended pregnancies occurred at the same rate in both the vaccinated and unvaccinated women.

Studies (see here and here) have also found that being unvaccinated is a huge risk to women in the reproductive age group as being infected with Covid-19 starkly increased pregnancy complications, including stillbirths and critical care admissions among the unvaccinated groups.

It is the mandate of the South African Health Products Regulatory Authority (Sahpra) rather than the Gender Commission, to evaluate the balance of any possible risk resulting from vaccine use against proven clinical benefits.

Sahpra’s current guidance is that Covid-19 vaccines for women of childbearing age and pregnant women are recommended. Using evidence generated by robust scientific studies, the CDC (US), WHO, NHS (UK), other internationally recognised authorities and the SA Vaccine Ministerial Advisory Committee have issued guidelines and advisories emphasising the importance of Covid-19 vaccination for women in this age group.

It is disconcerting that the Gender Commission, a Chapter 9 Institution of the SA Constitution and an organ of state, would stray from its constitutional mandate as set out in section 187(2).

The commission must promote respect for gender equality and protect, develop and attain gender equality. In realising its mandate, it has the power to monitor, research, educate, lobby, advise and report on issues concerning gender equality as regulated by the Commission for Gender Equality Act 39 of 1996.

The drafters of the Constitution judged it to be necessary to create a separate independent institution to deal with the distinctive needs of women, considering the unfair discrimination South African women were subjected to during the colonial and apartheid eras, and the patriarchal nature of society in our country.

Given the history of South Africa and the reason the commission was established, it is unfortunate and unacceptable that the commission seems to have lost its way and muddled the issues emanating from the mandatory vaccination debates with women’s reproductive health and rights. In addition, similar to the initial utterances from the Human Rights Commission (SAHRC) (also a Chapter 9 Institution), it is clutching at the wrong end of the stick and missed the point on individual rights versus public health needs when it uses section 12 of the Constitution to admonish employers and institutions regarding the “trampling” of human rights.

Notwithstanding the entitlements to rights, most rights in the Constitution may be limited, provided the limitation is of general application, and is “reasonable and justifiable” — which means that it is rational, proportional and the least restrictive in terms of achieving its objective (section 36). It is argued that, where backed by scientific evidence and the rights of all people to a safe environment, (both at work and educational institutions), it would be “reasonable and justifiable” to compel workers and students to take a vaccine that is available and approved for use by the Sahpra.

Fortunately, the SAHRC reviewed its communication and in September last year, while strongly encouraging voluntary vaccinations, recognised that the existential crisis caused by the pandemic affected all human beings and also that there were implications on both rights and responsibilities. It stated, therefore, that it was highly likely that a general law mandating vaccination would pass constitutional muster.

The purpose of Chapter 9 Institutions is to support and protect our constitutional democracy. It is essential that they monitor the government and assist us in holding the government accountable. They need to ensure that South Africa transforms into a society in which social justice prevails. Social justice includes gender justice. The Gender Commission has failed the women it is mandated to protect by failing in its responsibility to make certain that prior to communicating with the public, its statement was well researched and based on robust scientific evidence.

On the contrary, its statement is offensive and diametrically against women’s education and empowerment, and an impediment to attaining  gender equality.

We call on the Gender Commission to withdraw its statement, engage with the relevant institutions, societies and experts and replace it with one that truly addresses Covid-19 reproductive health concerns. Instead of misconstruing science to justify a stance against mandatory Covid-19 vaccinations, it would bode well for it to use the available evidence to build up and strengthen vaccine confidence among women. Surely, in this way, its mandate to promote and protect reproductive health and rights of women will be realised. DM/MC

Priya Soma-Pillay, head of department, Obstetrics and Gynaecology, University of Pretoria and Steve Biko Academic Hospital, president of The College of Obstetricians and Gynaecologists of South Africa.

Yasmin Adam, head of the Department of Obstetrics and Gynaecology, Chris Hani Baragwanath Academic Hospital, University of the Witwatersrand.