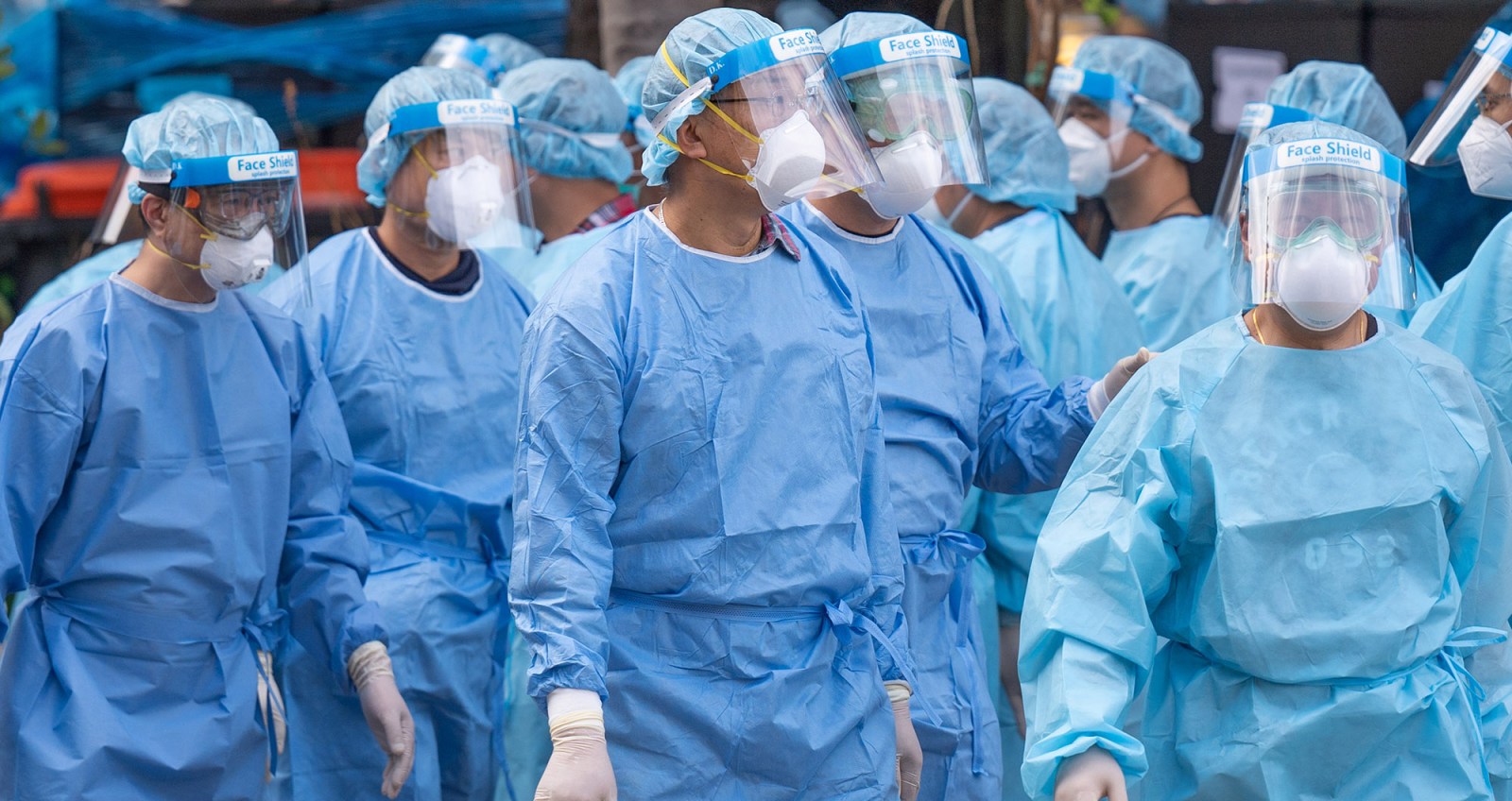 US President Joe Biden’s chief medical adviser, Anthony Fauci, expressed optimism that the Omicron surge will soon peak, but said the decline won’t be uniform throughout the US.

Germany is likely to keep current pandemic measures in place after a meeting on Monday to discuss the matter, according to the country’s regional leaders. In Brussels, protests against restrictions turned violent.

Hong Kong reported the highest number of Covid-19 cases in about a year, while Russian infections climbed to a daily record. A Covid cluster in China’s capital, Beijing, continues to grow and shows early signs of spreading to neighbouring provinces, adding pressure on authorities to contain the outbreak two weeks before the official start of the Winter Olympic Games. 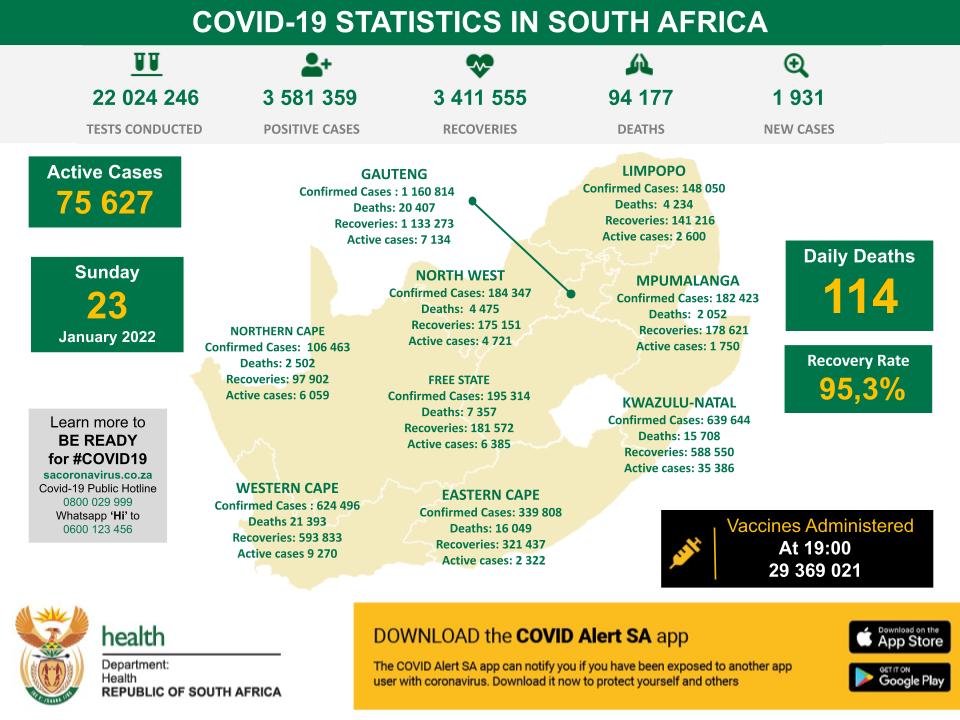 New Zealand’s government is warning businesses to be prepared for labour shortages and supply disruptions as Omicron takes hold in the community.

Finance Minister Grant Robertson has urged companies to ensure business continuity plans are in place and pledged government support, but warned that the impact of the variant could be severe. Modelling showed that in a scenario of 25,000 daily cases there could be 350,000 workers a day self-isolating, he said.

Italy must move from treating the pandemic as an emergency to a new “ordinary” phase where Covid-19 is just an illness among others, health undersecretary Pierpaolo Sileri said on Sunday on Rai1 television.

Sileri said the easing of restrictions must happen “at the right moment”, adding that he expected infections to decline in coming days. Italy recorded 138,860 new cases on Sunday.

US President Joe Biden’s chief medical adviser expressed optimism that the Omicron surge that has pushed Covid-19 infections and hospitalisations to records will soon peak, though that decline won’t be uniform throughout the US.

“Things are looking good,” Anthony Fauci, director of the National Institute of Allergy and Infectious Diseases, said on ABC’s This Week on Sunday. “We don’t want to get overconfident, but they look like they’re going in the right direction right now.”

European Union countries agreed not to add restrictions on vaccinated travellers, signalling a shift from basing rules on a region’s epidemiological situation to an individual’s vaccination status.

Ministers will sign-off on the decision on Tuesday, according to people familiar with the discussion. The move is non-binding, but signals that European countries are ready to leave behind the emergency measures they’ve had in place.

Protesters take to streets in Brussels

Around 50,000 people took to the streets of Brussels on Sunday protesting against Covid restrictions and vaccination passes. Some set flower pots on fire and others threw projectiles, including a chair, at police, according to local media. Police used tear gas and a fire engine to quell the protesters.

Protests erupted around Europe on Saturday, including in London, Paris, Stockholm and Athens, to protest against vaccine passports and other virus regulations and restrictions.

Germany is likely to keep its current pandemic measures in place, the country’s regional leaders said ahead of a meeting on Monday with Chancellor Olaf Scholz to discuss the situation.

“Tightening of the corona measures is not on the horizon and that is good news for the current state of affairs,” Lower Saxony Premier Stephan Weil told the RND media group before the summit. North Rhine-Westphalia’s regional leader Hendrik Wuest also said relaxing current measures isn’t on the table.

UK Deputy Prime Minister Dominic Raab signalled the government would maintain a deadline for health service workers to get a Covid-19 vaccine or risk losing their jobs, in a response to a press report that the mandate would be delayed.

Hong Kong reported 140 confirmed Covid-19 cases on Sunday, the highest number in about a year.

Of the new cases, 125 were locally transmitted while 94 were related to a cluster at a public housing estate in the New Territories, the city’s authorities said at a press conference.

Russia recorded a daily record of 63,205 new Covid-19 infections, the government response centre said on Sunday. The number of deaths was 679, close to levels of July.

With Russia at the start of a new wave, the Sputnik V vaccine is showing “very good efficacy” against the Omicron variant, said Alexander Gintsburg, director at Gamaleya Centre, which developed the vaccine, Interfax reported.

“I think it’s clear that we’re not going to eliminate Omicron, it’s now about how we suppress and manage Omicron,” Sanderson told reporters on Sunday in Perth, according to the ABC. The state now has 90 active cases, the Department of Health said in an emailed statement.

That will mean more mask wearing, gathering limits and increased distancing requirements at hospitality outlets. Businesses will be able to remain open and people allowed to travel freely. No regional lockdowns are being considered, Ardern said.

A gathering limit of 100 people at sporting or private events means weddings and funerals need to be reassessed, she said.

“As for mine, my wedding will not be going ahead, but I just join many other New Zealanders who have had an experience like that as a result of the pandemic,” Ardern said, without elaborating when her nuptials were planned for. “Such is life.”

A poll by Japanese newspaper Mainichi on Saturday showed 46% of those surveyed said they were fearful about the spread of the Omicron coronavirus variant but not as concerned as they were with the Delta strain, while 34% of respondents said they were very fearful.

Tokyo found 11,227 infections on Saturday. Authorities have placed curbs on 13 prefectures, including Tokyo and its surrounding areas, from Friday to February 13.

The neighbouring Shanxi province said a resident who tested positive for the virus was a cold storage worker in Fengtai, as was another case in Shandong province. Two other cases in Shandong were cargo drivers who are linked to a Fengtai cold storage facility.

Students in the Los Angeles Unified School District will no longer be allowed to wear cloth masks, the district announced on Saturday.

The new rule requires “well-fitted, non-cloth masks with a nose wire”. The masks must be worn “at all times, indoor and outdoors”. The higher-grade masks will be given to students who request them.

– With assistance from Alessandro Speciale, Jillian Deutsch and Jorge Valero.