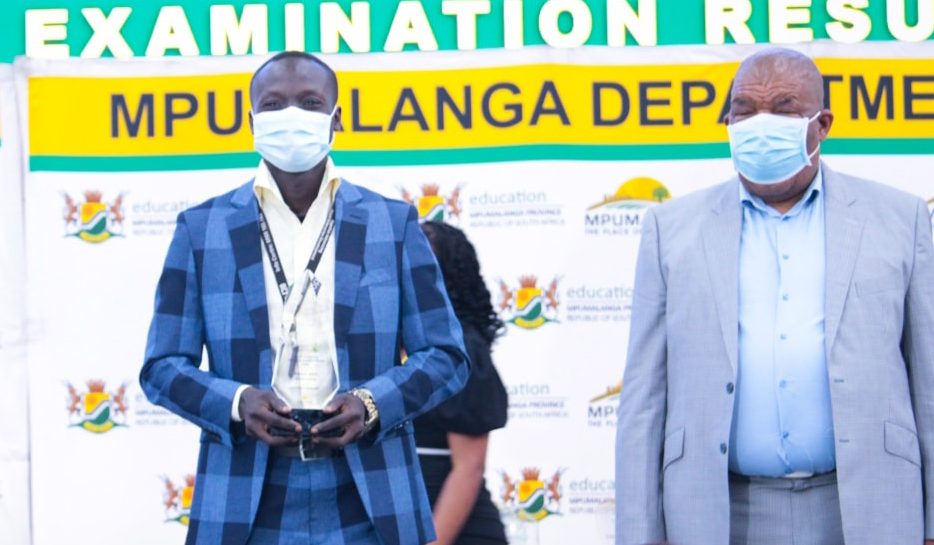 The principal of Oasis College receives a trophy from the Mpumalanga Department of Education for 100% pass rate in 2021 and THE BEST PERFORMING SCHOOL in the Province. 21.01.2022. Picture: SUPPLIED

The province's best performing matriculant, Angela Mpaka Kgothatso achieved 100% in maths and physical sciences, and was rewarded with a sponsored vehicle.

Angela Mpaka Kgothatso hails from a humble town in the Thembisile Hani municipality of Mpumalanga, and was a student at the quintile two Kwamhlanga Secondary School.

Quintile 1 schools represent the poorest 20% of schools in the country, while quintile 2 status schools are the second poorest.

The results announcement was delivered over a livestream by the Mpumalanga Department of Education, and the limited in-person audience at the event could be heard cheering loudly when the top-achieving student’s name was called.

A new sponsored vehicle and R10,000 in cash were just a few of the awards Kgothatso received for her numerous academic achievements. She ranks first among 66,758 pupils from Mpumalanga who wrote the 2021 National Senior Certificate exams.

Kgothatso was one of the 73.6% of students from the province who wrote the NSC exams and successfully passed matric for 2021.

Mpumalanga Premier Refilwe Mtsweni-Tsipane said in her address at the ceremony that her province has not seen an overall pass rate below 70% since 2012, but noted that there is still work to be done, with many schools still performing well below 70%.

She said in particular that boarding schools, such as Emakhazeni, which were brought in as part of the province’s mission to phase out “small” and “unviable” farm schools, performed well but did not reach their targets. The premier said they need to understand what these schools need to succeed, and phase out these schools so that resources can be directed towards more worthwhile educational projects.

Maths was another area of concern, with Mpumalanga only achieving a 54% pass rate in the subject. Mtsweni-Tsipane said the province aims to improve this performance to a 70% pass rate for maths by 2026.

The premier noted that of the 49,133 students that passed matric in Mpumalanga, most were female, precisely 26,918 matriculants. During the awards portion of the ceremony, it was announced that 18 schools in the province had achieved a 100% matric pass rate, one of which was the correctional services school of the Umlalati Learning Centre for prisoners in the Umjindi local municipality of the Ehlanzeni District.

The premier encouraged those who did not pass these exams to reintegrate back into the school system to obtain their certificates and complete the work they started. Her advice to them was to, “feed focus and starve destruction”. DM