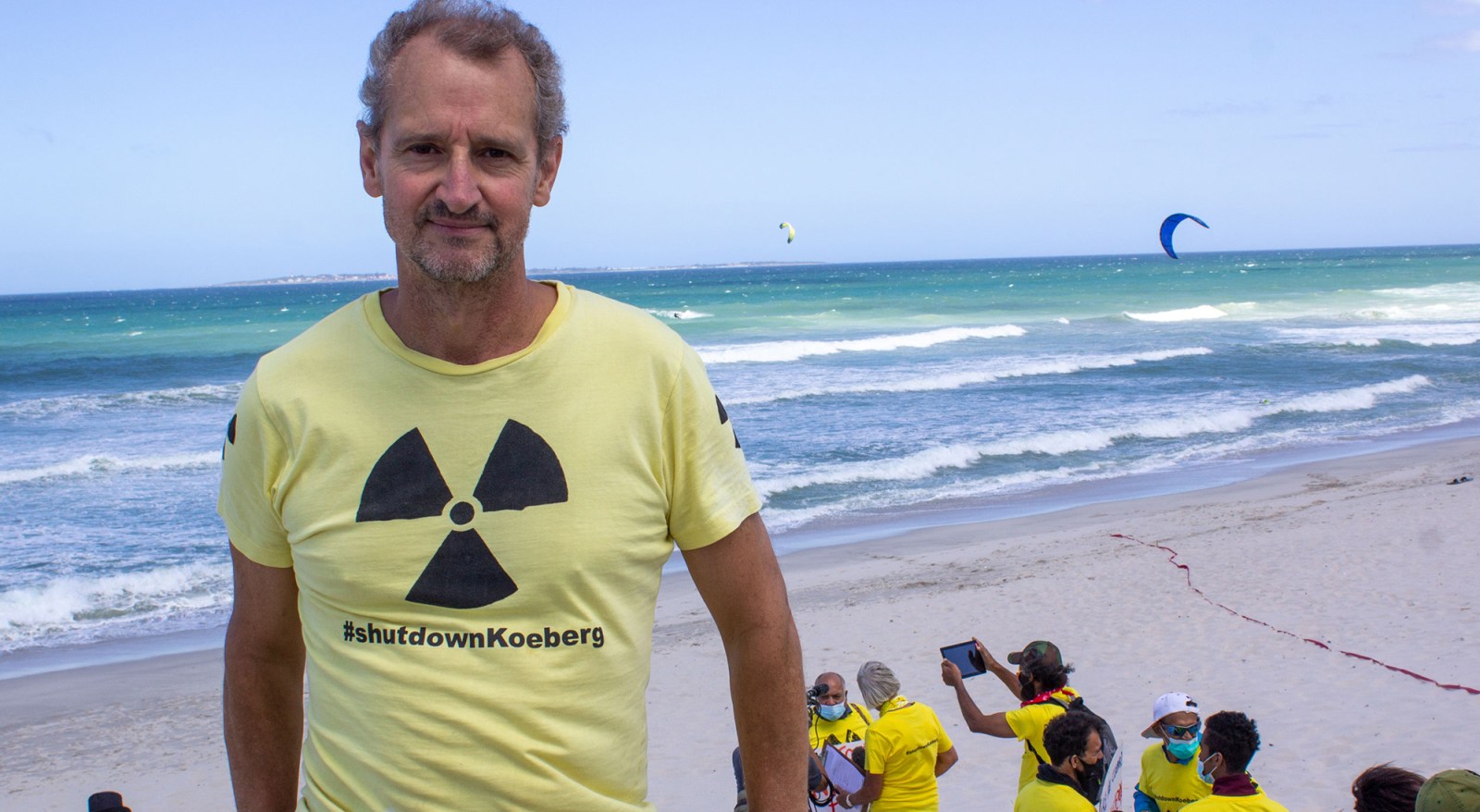 Peter Becker, spokesperson for the Koeberg Alert Alliance, helps to coordinate a protest against the extension of Koeberg Power Station’s operating life at Bloubergstrand Beach on 16 December 2021. (Photo: Tamsin Metelerkamp)

Minister Gwede Mantashe suspended the civil society representative on the board of the National Nuclear Regulator, Peter Becker, on Tuesday – the day the regulator gave Eskom the go-ahead to replace the steam generators for Unit 2 of Koeberg Nuclear Power Station. Members of civil society organisations have questioned the timing of the suspension, amid concerns about Koeberg’s life-extension project.

The civil society representative on the board of the National Nuclear Regulator (NNR), Peter Becker, was recently suspended from his position with “intention to discharge”. In the letter of suspension, signed by Mineral Resources and Energy Minister Gwede Mantashe on 18 January 2022, it is claimed that the allegations against Becker are serious and that his continued presence on the board may “prejudice its effective and efficient functioning”.

The suspension comes at a key stage in Eskom’s efforts to extend the lifespan of the Koeberg Nuclear Power Station for 20 years beyond its original shutdown date in 2024. Daily Maverick previously reported that Unit 2 had been taken offline on 17 January 2022 for planned maintenance and the replacement of the steam generators and reactor head – processes necessary to the life-extension project.

At the point the unit went offline, formal approval had not yet been provided for the replacements by the NNR, according to Chris Yelland, energy analyst and managing director at EE Business Intelligence. However, Lewis Phidza, stakeholder management manager at Koeberg, confirmed that the regulator subsequently gave approval for the replacement of the steam generators, on 18 January 2022.

Yelland said in a Twitter post on 18 January: “Rightly or wrongly, this action against Peter Becker at this specific time as Eskom commences a shutdown on Koeberg Unit 2 for major life-extension work gives the impression that the NNR has something to hide, or wanted Becker out the way prior the board authorisation to proceed.”

It would be “remiss” of the Department Mineral Resources and Energy to divulge further information regarding the allegations against Becker at this stage, since the matter is still under consideration, according to the department’s ministerial liaison officer, Natie Shabangu.

Said Becker: “I would love [the allegations] to be released. Once it’s released, I would love to engage with the detail of it… But at the moment, […] I’m bound by confidentiality agreements, and since that is a board document, I’m not at liberty to disclose it.”

In the suspension letter, Mantashe states: “I was informed by the Chairperson of the [NNR] Board that Mr Becker’s conduct prompted the Board to procure a legal opinion to establish whether his conduct poses a conflict with his role and fiduciary duty as a member of the Board. I am in receipt of the opinion dated 6 October 2021 by KT Diong of MacRobert Attorneys. This opinion was shared with Mr Becker on or about 8 October 2021.”

While Becker subsequently made it clear that he disputed the contents of the opinion, no written representation was received by the minister prior to the suspension, said Shabangu.

Wayne Duvenage, CEO of the Organisation Undoing Tax Abuse (OUTA), questioned the timing of the suspension. “There seems to be a legal opinion obtained in October,” he said. “Why only act now in January, at a time that seems very opportune for the board to start pushing through decisions on Koeberg’s life extension?”

When asked about the gap between the receipt of the legal opinion and Becker’s suspension, Shabangu said: “The legal opinion was forwarded to Mr Becker, and the ministry and the department would have had to give Mr Becker an opportunity to submit written representation, before a decision to suspend could be taken.”

“We were very pleased […] when the Minister appointed [Becker] to the board. For the first time we see genuine, proper civil society representation on this board,” said Duvenage. “So, it was a good move, and then they remove him within six, seven months of his appointment. It’s just without good reasons.”

On the board, Becker serves to represent the interests of communities that may be affected by NNR decision-making. “The idea is that I am in touch with civil society, I collect the concerns of civil society, and I’m in a position to present those concerns at board level,” he said.

Koeberg’s planned life extension has been a point of much contention among civil society members in recent months. In December 2021, a protest was staged by the Southern African Faith Communities’ Environment Institute (SAFCEI) and the Koeberg Alert Alliance (KAA) questioning the safety of the extension. Becker is KAA’s spokesperson.

“As from our perspective, the timing [of Becker’s suspension] seems to be coinciding with civil society questions and concerns about the ongoing issues at Koeberg, the lack of transparency on decision-making and the lack of due public participation in major energy planning, which should be happening,” said Francesca de Gasparis, executive director of SAFCEI.

The Mineral Resources Department believes that the NNR board will make decisions “derived from national interest”, said Shabangu about whether the department is concerned by the absence of an active civil society board member during this phase of NNR decision-making. However, he added that this does not mean there is no need for a civil society representative.

“There’s strength in diversity of opinions in any body, and it’s particularly important in an area of such public interest as nuclear safety,” said Becker, adding that the NNR board includes a representative of the department, which is well known for publicly promoting nuclear power as a solution to South Africa’s energy needs.

Since others on the board have a neutral stance on nuclear power, the balance of opinion becomes “pro-nuclear” without the presence of representatives who do not consider nuclear power a solution to the country’s energy needs, he said.

“My first choice would be a nuclear power-free South Africa. But if that’s not possible, my second choice is to have safe nuclear power in South Africa… and that is where I saw myself being of use within the NNR,” said Becker. DM