Games on! Proteas look to Quad Series in London to boost quest for gold 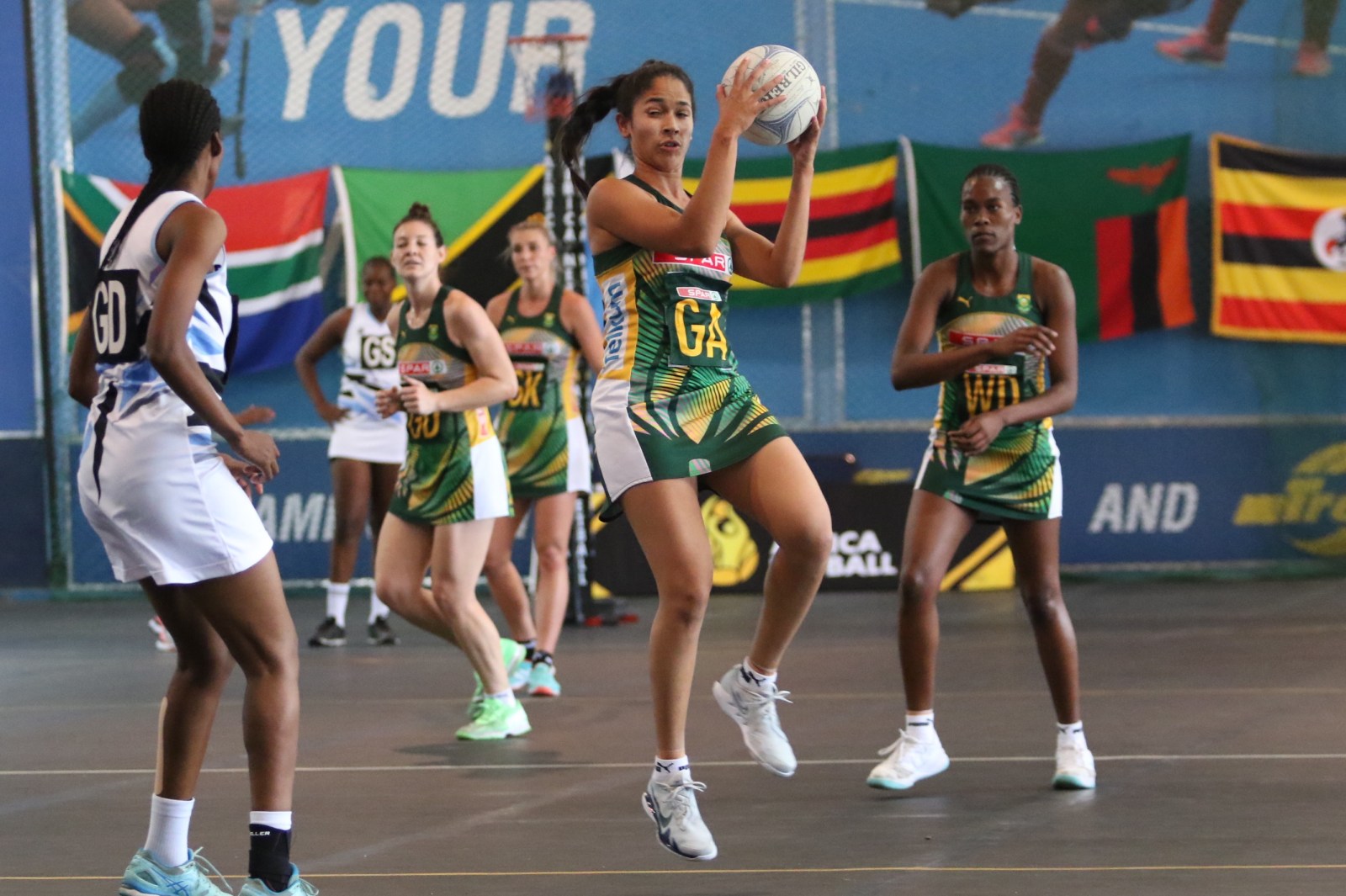 Jessica du Plessis in action for South Africa against Botswana at the Netball Africa Cup in Windhoek on 13 November 2021. SA won the match 85-24. (Photo: Helge Schütz)

The Spar Proteas are gunning for a historic 2022 at the Commonwealth Games — but first, the showdowns in England.

With it being a year for the much-anticipated Commonwealth Games, the Spar Proteas are fine-tuning their preparations for what the team hopes will be a memorable 2022.

This potential success includes hopes that coach Dorette Badenhorst’s team win a medal for the first time at the Games. The team’s current best return was a fourth-place finish more than 20 years ago.

To step up their preparation in this regard, the Proteas are off to London, England to play in the Netball Quad Series.

There they will clash with the three nations who are likely to stand in their way as they chase that maiden podium finish at the Games: Australia, New Zealand and hosts, England.

The three teams occupy the No 1 to No 3 spots on the global netball rankings, with the Proteas occupying the fifth spot, behind fourth-placed Jamaica. The series is just the type of challenge Badenhorst and her team need to gauge the progress they have made over the last 12 months.

“The Quad Series is a clash between the medal contenders for the Commonwealth Games and for that reason I see no better preparation than this tournament,” said Badenhorst.

“As a team, we want to perform very well at this tournament and I am looking forward to seeing how our new players will fare against top nations in the world and seeing how our combinations will work. This is a preparation for the Commonwealth Games for us.”

Despite not playing as much netball as they would’ve liked during 2021, due to the prevailing global conditions and restrictions induced by Covid-19, the Proteas still managed to play enough games to expand the depth of the squad.

Due to Covid-19, the Proteas were forced into an isolation camp for a week in South Africa before they jetted off to England on 7 January. There, Badenhorst and her technical team continued to drill and sharpen the players, who all returned negative results when tested for the coronavirus prior to departure.

“I am very happy with the work that the players put in during the training camp. It was unfortunate that we could not have our UK-based players due to travel restrictions… However, the intensity and hard work rate that came out from the ones we had was impressive,” Badenhorst said.

“The mood in the camp is very jovial and everyone is incredibly positive. We have a few young players in the team and we as the senior players need to make sure that we guide them and hold their hands in this series,” Proteas captain Bongiwe Msomi added.

There were fears that the Proteas would not be able to participate in the competition altogether. This after the emergence of the Omnicron variant led to the UK placing South Africa on its “red list” and effectively banning travellers from the country, as well as other African nations.

Fortunately for Badenhorst and her charges, the list was scrapped in mid-December and they could forge ahead with all the necessary preparations — much to their relief — as Msomi shared with journalists.

“With Covid-19 on board, you never know how much game time or competition you can take part in. We missed out on a big clash against Jamaica last year [after it was cancelled due to Covid-19]; that was a really big disappointment,” said Msomi during a virtual press conference.

“This one is a really big one for us. We are really excited that we can go to England. We know that in England things are quite hectic [with Covid-19]. So, the planning and preparation behind this has been massive. After we’ve been together for some time, now we are actually going to go out and be challenged. And we’re excited about that.”

The contest between the four nations will be played from 15 to 19 January and will be broadcast on SuperSport. DM168