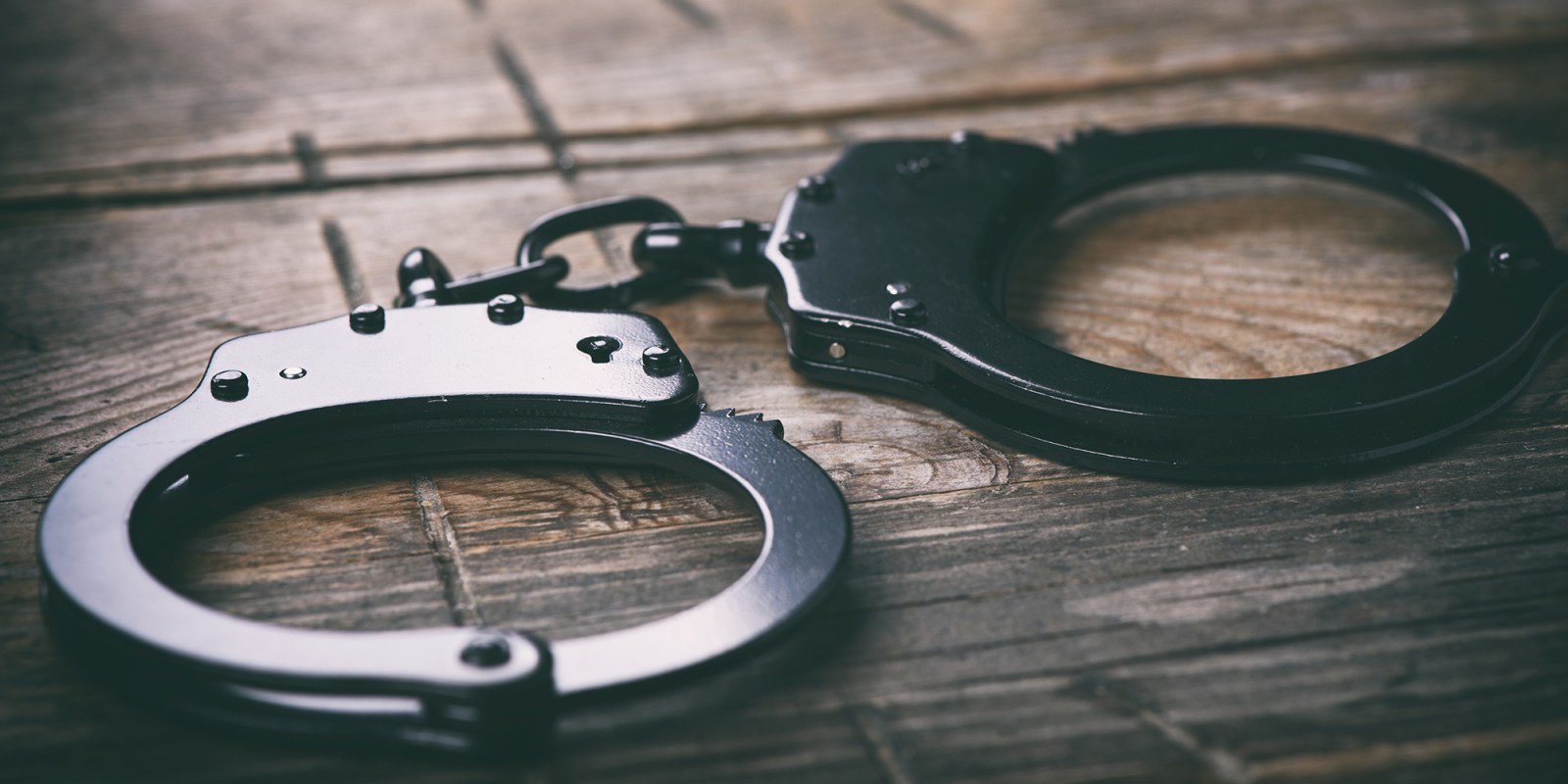 Our daily roll call of successful criminal prosecutions, arrests or ongoing matters in South Africa’s courts. We do this to reflect on the rule of law and to make justice visible.

A third accused, also from Bathurst, was 17 years old when he committed the rape and was sentenced to 10 years’ imprisonment. The pre-sentence report stated that the teenager had been influenced by his older co-accused. He cannot be named as he was a minor at the time.

On 28 April 2018, at Bathurst in the district of Port Alfred, the teenage girl was walking home with her 23-year-old boyfriend when the three perpetrators took her at knifepoint to a railway line where they all raped her consecutively.

The National Prosecuting Authority commended the “excellent work” by the investigating officer, and the prosecutor, advocate Hanlie Obermeyer.

The Mogwase Magistrates’ Court postponed the case against Oupa Nkele (41) to 20 January for a bail application. The postponement was made due to heavy rain that made it impossible for court recording devices to capture proceedings.  Nkele is charged with attempted murder and rape.

Preliminary police reports revealed that Nkele, who is separated from his wife, called and arranged for them to meet to discuss an urgent matter.

As per the agreement, he collected his wife from her parental home on Wednesday afternoon, 29 December 2021. He then drove towards a local mall, but changed direction and headed to their house at Lerome village near Mogwase outside Rustenburg.

An argument ensued after the pair arrived in Lerome. Nkele allegedly assaulted and throttled his wife with a rope, then poured petrol over her and raped her.

Then he allegedly forced her into his car and drove away with her, but she managed to unlock the car and jumped out.

According to the police report, the woman received assistance from a good Samaritan who took her to a police station, where charges of attempted murder and rape were laid, leading to the swift arrest of Nkele on Thursday, 30 December 2021.

He will remain in police custody until his next court appearance.

The Ga-Rankuwa Magistrates’ Court postponed a case against four suspects charged with the murder of Sam Mbatha (24) to 8 February 2022 for the Director of Public Prosecution’s (DPP’s) decision.

The state will await the DPP’s authorisation of transferring the case to the North West Division of the High Court, owing to the serious nature of the offence committed.

The four accused are Arthur Khoza (19), Thato Masetla (22), Junior Modise (21) and Mahlatsi Nkuna (21). All were arrested following an intensive investigation by the police. Meanwhile, Modise failed to appear in court and a warrant for his arrest was issued and his bail revoked.

Masetla abandoned his bail application while Khoza and Nkuna are still out on bail of R500 each.

Their bail conditions are that they must report at the Klipgat Police Station every Wednesday and Sunday between 5pm and 6pm, and they are also barred from interfering with State witnesses.

Police investigations led to a house in the Phutha section, Klipgat on Monday, 21 June 2021 and the house was searched.

Bloodstains were found on the floor, under and on top of a bed as well as on the carpet. An axe suspected to have been used during the commission of this crime was found on the roof of the house. DNA samples positively identified Sam Mbatha as the deceased person whose body was found inside a burnt Hyundai i20 vehicle at a soccer field in Ikageng Section on 10 January 2022.

The Vryburg Magistrates’ Court postponed a case against Sibongile Dube (35) to 25 January for Legal Aid representation.

His court appearance originates from his arrest on 9 January, when he was caught smashing the Vryburg Magistrates’ Court windows.

Dube is charged with malicious damage to property. In a turn of events, Dube told the court that he would no longer be pleading guilty and requested a Legal Aid attorney.

In his last appearance, on Monday, 17 January, Dube opted to represent himself and told the court that he intended to plead guilty.

He claimed his actions had been driven by anger, following a three-month jail sentence he served for failing to appear in court on a separate offence in June 2020.

He also attributed his anger to a two-year sentence he received in 2009 in an assault case. He alleges he had a valid reason for not attending court, but was nonetheless sentenced.

A security officer on duty at the Vryburg Magistrates’ Court on 9 January 2022 heard windows being smashed, and upon investigation saw a suspect running away from the scene. The security officer gave chase and caught Dube. The police were called and he was arrested and officially charged.

Dube will remain in custody until his next court appearance.

The Orkney Magistrates’ Court deferred the case against 87 suspects who are facing charges related to illegal mining at Shaft 2 in Orkney. They will now appear at the Regional Court in Stilfontein on 2 March, so the police can conduct further investigations.

It has been established that all 87 persons have no legal documents to be in South Africa and as such are illegal.

Police reports indicate six people were killed and eight of the accused wounded in a shootout with members of the Special Task Force assisted by the Hawks in North West.

This was an intelligence-driven operation on Wednesday, 20 October 2021.  One of the accused is still under police guard, receiving medical attention in a health facility. The case proceeded in his absence.

The suspects will remain in police custody until their next court appearance.

“Strong cooperation” between the National Prosecuting Authority (NPA) and the Hawks has paid dividends as the Blue Downs Regional Court in Cape Town denied bail to alleged gang leader Nafiz Modack, his lieutenant Jacques Cronje and a former member of the SAPS Anti-Gang Unit, Ashley Tabisher.

The court agreed with the State that the accused had failed to show there were exceptional and compelling circumstances for them to be released on bail and that the state has a prima facie case.

Their charges include conspiracy to commit murder and murder of the Anti-Gang Unit member, Lieutenant-Colonel Charl Kinnear who was assassinated outside his house on 18 September 2020.

The charges also include conspiracy to commit murder and attempted murder of Cape Town lawyer William Booth. Other charges relate to managing and participating in the activities of a criminal enterprise, corruption and money laundering, intimidation, kidnapping and extortion, malicious damage to property and several charges of unlawful and intentional interception of communication.

During the bail application, the State, represented by advocate Blaine Lazarus, advocate Greg Wolmarans and advocate Adnaan Gelderbloem, placed on record that Modack has 15 pending cases including murder, attempted murder, extortion, corruption, intimidation, fraud and defeating the ends of justice.

Cronje has seven pending cases, which include extortion and intimidation, kidnapping, assault with intent to cause grievous bodily harm and unlawful possession of a firearm.

The State pronounced that although the two applicants had withdrawn cases against them, the withdrawn cases reflected a tendency to commit a crime. Tabisher has no previous convictions, pending cases or warrants of arrest against him.

The State submitted that Modack faced “very serious charges” and that the State had a very strong case against him.

“If convicted, the accused will be sentenced to life imprisonment. The State’s witnesses have agreed to testify and are known to Modack. Their lives would be in danger if he is granted bail. He has the potential to cause violent threats considering the charges he is facing.” DM