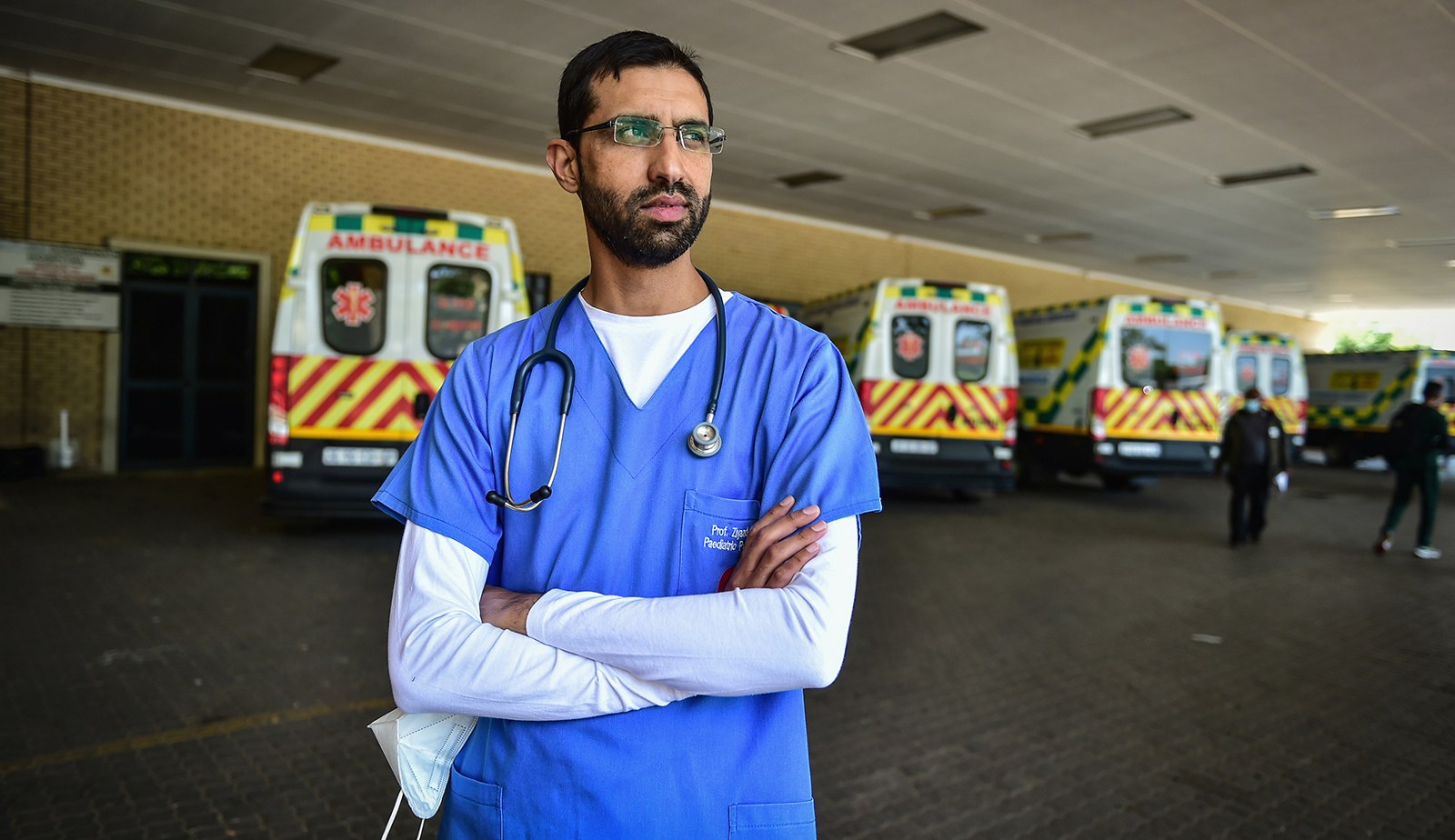 An article co-authored by Professor Ziyaad Dangor and five colleagues, and published in the South African Medical Journal, explains how in February they designed and implemented a mass vaccination roll-out at Baragwanath, with its 7,400 staff members. (Photo: Steve Lawrence)

Helping with the vaccine had been voluntary, a task above and beyond his usual duties as a paediatric pulmonologist (specialist in children’s lung disease).

An article co-authored by Dangor and five colleagues and published in the South African Medical Journal explains how in February they designed and implemented a mass vaccination roll-out at Baragwanath, with its 7,400 staff members.

This would become a blueprint for mass healthcare worker vaccinations across South Africa — replicated by the Department of Health and in the private sector.

“Towards the end, we were doing close to 170 people an hour,” says Dangor. “The article basically gives a diagrammatic representation of how we brought people into the centre … so we would have all the vaccines ready. We would bring people in as a group, vaccines would be given to the group, people would walk out as a group, and be observed as a group. Then the next group would come in.”

“What I liked about it was that it was driven primarily by clinical staff, not by administrators,” says Dangor. “So, it was nurses and doctors from the hospital who were essentially on the ground running the programme. There was so much camaraderie, the best camaraderie I’ve seen in the years I’ve been a doctor. There were people from all medical departments, whether they were psychologists, psychiatrists, dermatologists, physicians… You basically took a group of people and said, ‘the common goal is we need to vaccinate all our staff in a week’. And that was what people stood up and did.”

Dangor started at Baragwanath in 2005 as an intern. He completed his doctoral thesis at the University of the Witwatersrand under the supervision of renowned Professor in Vaccinology Shabir Madhi, who led Covid-19 vaccine trials in South Africa.

Dangor explains that his PhD focused on the transmission of Group B Streptococcus (GBS) bacteria from mothers to babies at three hospitals in Johannesburg. His words are rapid but soft as he patiently simplifies medical jargon.

“So, the mother, like other adults, male or female, has this germ,” he says. “And most women don’t have any symptoms. The biggest concern about this germ is that the mother passes this germ on to the baby. And the baby then is born unwell or develops sickness in the first few weeks of life. And why we are so afraid of this germ is because it can cause meningitis.”

At the time, he found an incidence of 2.5 out of a thousand babies with GBS sepsis or meningitis. This is alarming, says Dangor, as one out of six of these infected babies is expected to die; others could have developmental problems, resulting, for example, in impaired hearing or walking.

“It’s very sad. Mothers tell us they never even heard of this germ,” he says. Dangor points out that the World Health Organization notes GBS as a significant contributor to infant deaths and disability, having prioritised development of a GBS vaccine for maternal immunisation.

Why did he choose paediatrics?

“I think the one thing that drew me towards paediatrics was the compassion by clinicians towards their patients,” he says. “I’m not saying it doesn’t occur in other specialities, but I think when you’re dealing with a child, you need a lot more of that.”

He adds: “Also, you’re not only treating the child, you’re treating the whole family, and there is an enormous amount of joy to see a child getting better. Especially at Bara, being here in Soweto, and I say this very sincerely, people don’t have much. There is still so much poverty.

“And I think people, when they come to a state hospital, feel that they don’t have any other option, you know. I think people who come here, they are very vulnerable, looking for care for their loved ones. And seeing that immense joy and appreciation when their child gets discharged or gets better, that is something so special and amazing.”

Dangor lectures students at Wits University, and serves as chair of the executive committee of the South African Paediatric Association. He lives in Lenasia with his wife and their three teenagers.

He is one of South Africa’s six Integrity Icons for 2021. Driven by global non-profit organisation Accountability Lab, the campaign aims to “name and fame” civil servants who embody integrity and go beyond the call of duty in their communities. DM/MC