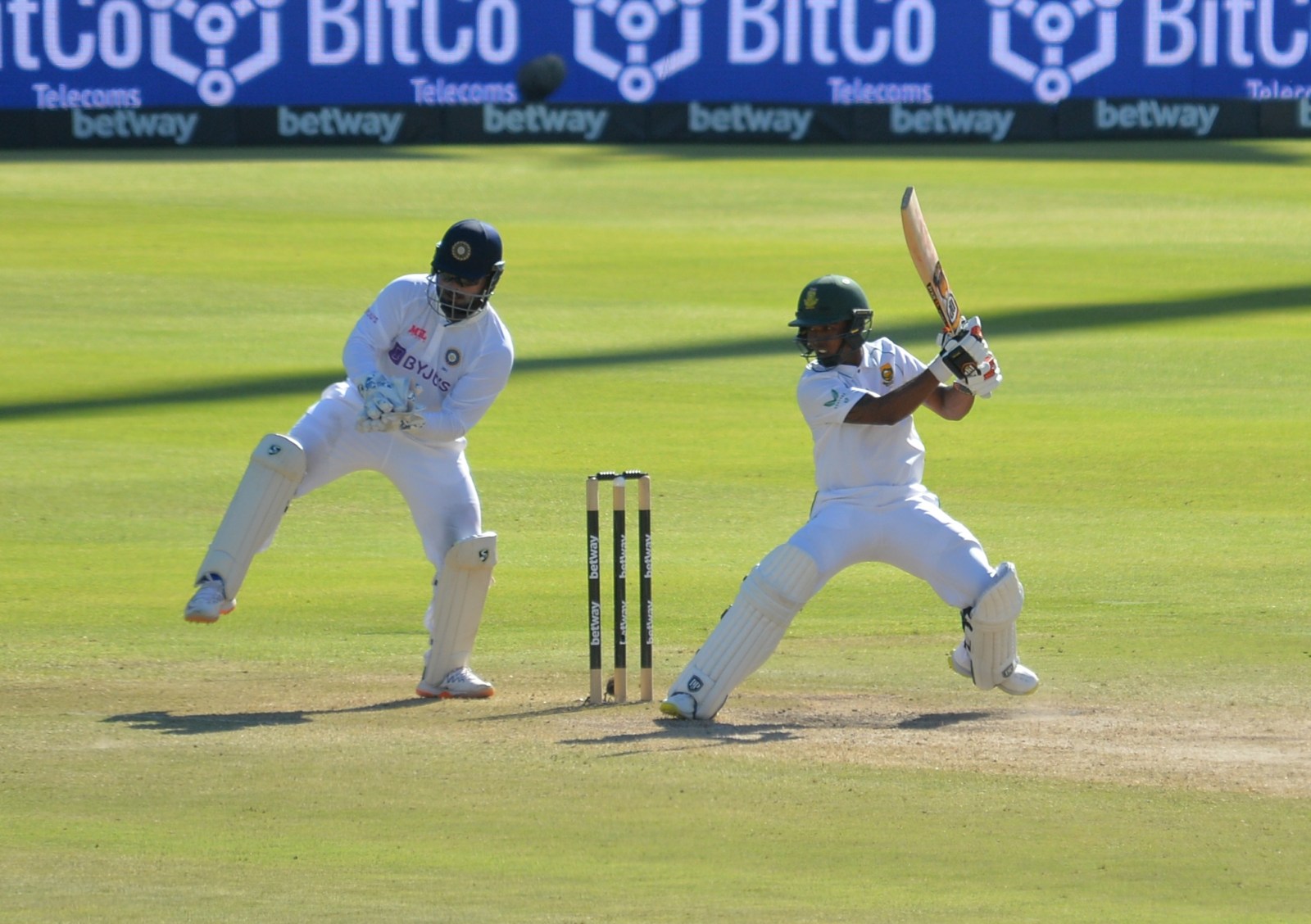 Keegan Petersen of South Africa bats his way to 48 not out against India on day three of the third and deciding Test at Newlands in Cape Town on 13 January 2022. (Photo: Grant Pitcher / Gallo Images)

In a Test series that has been dominated by fast bowling, India’s Rishabh Pant played the innings of the series so far to give his side a chance of a historic series win.

But his unbeaten 100 off 139 balls, which included six fours and four lusty sixes, might not be enough as South Africa closed the day on 101 for two, needing 111 to win with eight wickets in hand.

At one stage Pant was literally throwing his bat at the ball as his cricket bat slipped from his grip and flew toward square leg while the ball soared to the fielder at deep point.

India’s wicketkeeper struck his fourth Test century and only the second of the series — after vice-captain KL Rahul’s hundred in the first match of the series at SuperSport Park. He never looked like getting out, but he steadily lost partners at the other end.

South Africa were desperate to get back in the game at the start of day three, as a good start by India in the morning would take the match and the series away from the hosts.

They got exactly what they needed in the first over of the day as Keegan Petersen took an exceptional catch at leg slip off the bowling of Marco Jansen to dismiss Cheteshwar Pujara for nine runs.

Kagiso Rabada was in the act soon after to dismiss Ajinkya Rahane (1), giving the South Africans a near-perfect start with two wickets in the first half hour of play. Rabada later dismissed Umesh Yadav for a duck to end on figures of three for 53. The Proteas’ spearhead has taken at least three wickets in every innings of the Test series.

An antithetical partnership then ensued by the experienced Virat Kohli and the exuberant Pant as they put on a partnership of 94. Pant contributed 71 of those runs off 76 deliveries while Kohli contributed only 15 runs off 103 deliveries.

Kohli’s patient knock eventually came to an end when Lungi Ngidi induced an edge, the captain gone for 29 runs off 143 deliveries.

Ngidi went on to remove Ravi Ashwin (7) and Shardul Thakur (5) to finish with solid figures of three for 21 off 14 overs.

The final wicket of the innings, that of Jasprit Bumrah off the bowling of Jansen, a skied ball caught by Temba Bavuma, meant that all 20 of India’s dismissals in the match were caught out by fielders. This is the first time in Test match history that this has happened.

Jansen’s success in cleaning up the tail meant he finished with standout bowling figures of four wickets for 36 runs.

The Proteas were set an achievable total of 212 to chase to win the Test match and the series.

After a thorough examination of the openers’ technique, Mohammed Shami finally clasped the wicket of Aiden Markram (16), leaving South Africa on 23 for one. It was the fourth time in the six innings this series that Shami has dismissed Markram.

Petersen and Proteas captain Dean Elgar then steadied the ship with a commanding partnership despite the tight bowling and incessant sledging by India, led by their captain, Kohli.

The tension continued to build in the field and finally came to boiling point when Ashwin trapped Elgar in front of the wicket. He was given out LBW by umpire Marais Erasmus.

Elgar decided to use the Decision Review System (DRS) — on hope more than on faith, judging by his body language. To the surprise of most, Hawkeye judged that the ball was going over the stumps and the decision was overturned, much to the dismay of Kohli and Ashwin, who went on to use the stump microphone as a speaker to vent his frustration about the decision.

Ashwin said into the mic, “Find better ways to win, SuperSport”, implying the host broadcaster had somehow rigged the DRS system. Kohli, who earlier had started the verbals with a pointed, “Relax guys, I can hear your heartbeat” to openers Markram and Elgar, was less playful this time.

“Focus on your team as well while they shine the ball, eh?” he said into the mic, which was a clear reference to the 2018 match at Newlands between Australia and South Africa. On that occasion, the SuperSport cameras picked up Australian fielder Cameron Bancroft using sandpaper on the ball, which led to the infamous “Sandpapergate” scandal.

How the match referee will react to those remarks will unfold in due course, but the reality was that it exposed the tension and desperation that Kohli and India have to win this series. They have never won a Test series in South Africa and considering the vast difference in class — on paper at least — between the teams, losing the series would be a bitter setback for the world’s No 1-ranked team.

At least the visitors left Newlands on Thursday in a better frame of mind though, as they finally removed the obstinate Elgar, ironically through the use of DRS.

With the last delivery of the day, Bumrah strangled Elgar down the leg side as the batter edged the ball behind for Pant to take a smart, diving catch. Elgar was originally given not out by on-field umpire Adrian Holdstock, but on review the Proteas skipper was sent packing for 30 runs off 96 deliveries.

That gave India a little hope, but it will require a superb bowling effort and a dramatic Proteas collapse for India to win. However, the pitch is displaying variable bounce and a few early wickets on day four will send jitters through the home team’s fragile batting department.

South Africa will start the day with the excellent Petersen (48), who looked at his elegant best today, the key man. He played the pace attack comfortably and lashed spinner Ashwin out of the attack late in the day. With Rassie van der Dussen for company at the start of play, the pair need to set the tone and ensure India make no inroads. Time is not an issue, with two full days — amid good weather forecasts — remaining.

Petersen, who is two runs shy of his second half-century of the match, has a golden opportunity to claim a maiden Test century which would go a long way to securing a famous win for the Proteas. It will be a long night as he and his team ponder the possible glory, or agony, that day four could bring. DM