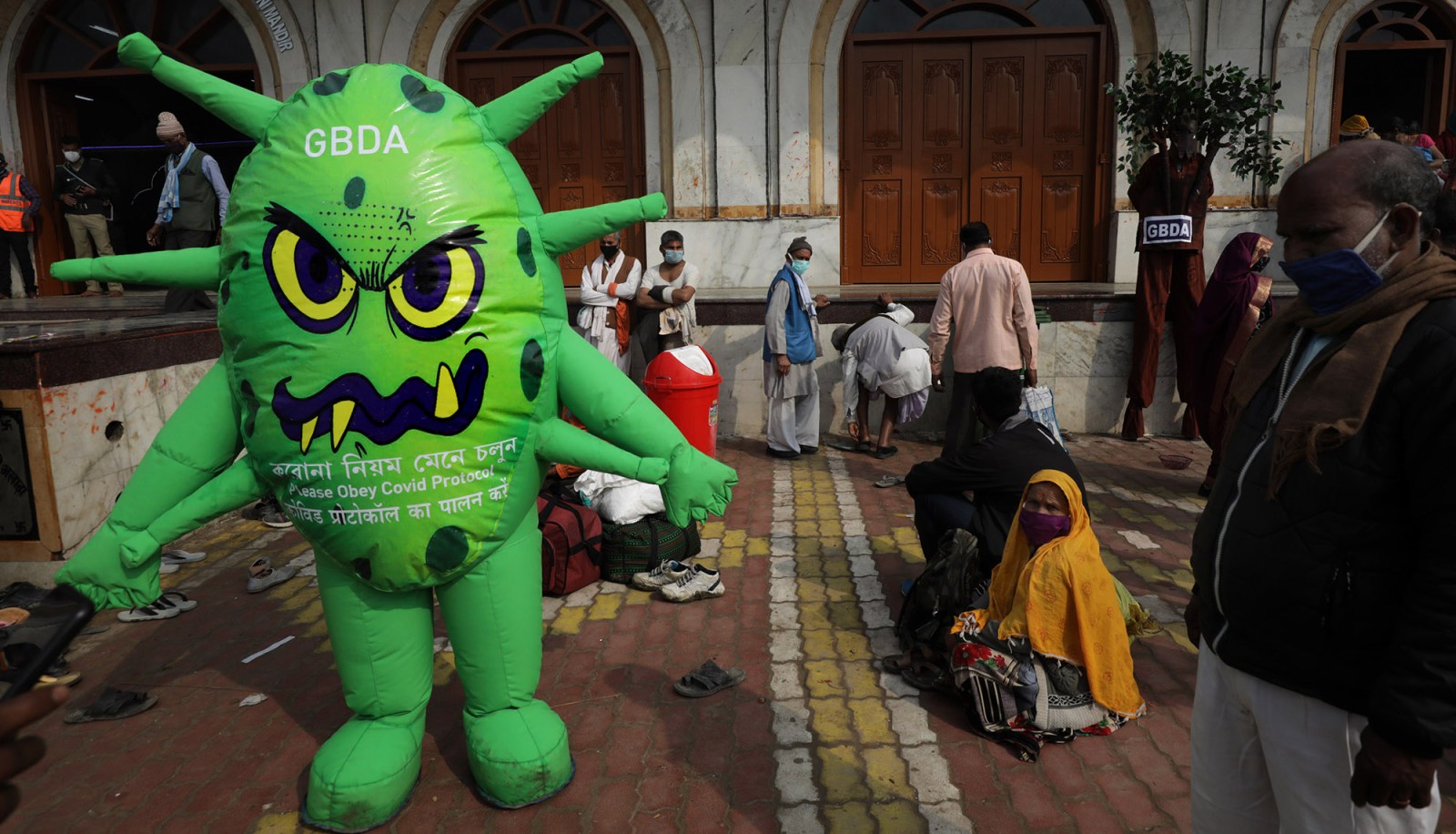 President Joe Biden said his administration will double its order of rapid tests to send to Americans, while also distributing “high quality” masks to help fight a surge of cases of the Omicron variant. The president also said his administration is deploying military doctors, nurses and others to six hospitals in six states, including New York and New Jersey.

Cases among US nursing-home workers jumped almost tenfold in recent weeks as the Omicron variant raced through the US’s senior-care facilities. Cases are also spiking among nursing-home residents.

Goldman Sachs Group delayed the return of its US staff to the office by another two weeks.

Boris Johnson’s government cut the self-isolation period in England to five days from seven amid staff shortages at hospitals, schools and businesses. France eased border restrictions for UK travellers who are vaccinated, while Germany reported record new infections for a second day. 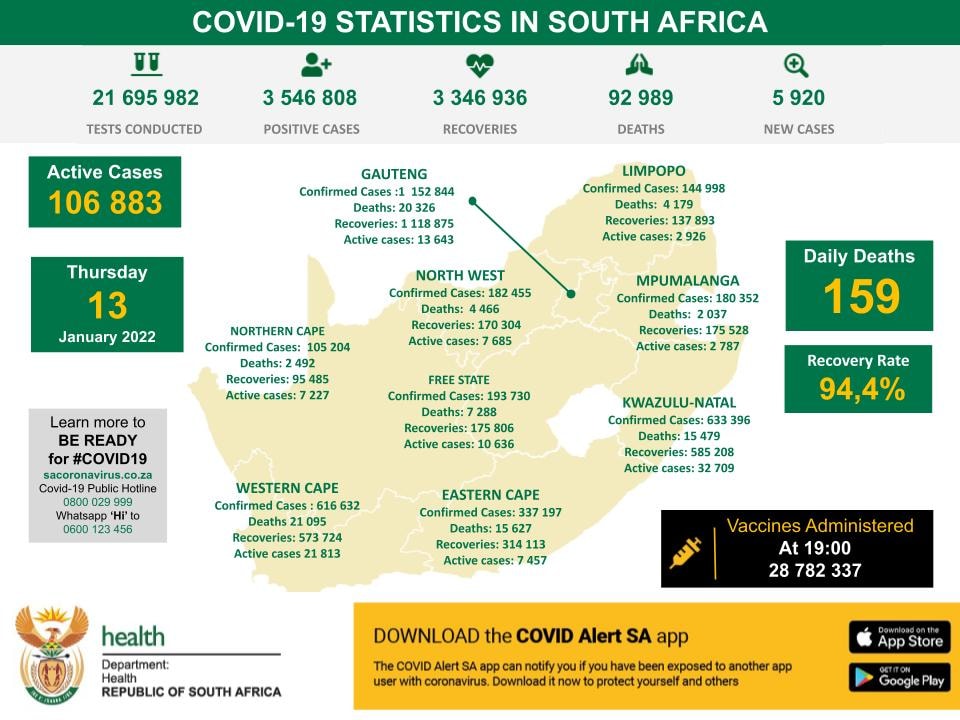 The surge of Omicron cases is having a direct hit on US small businesses, which employ almost half of the country’s private-sector workforce.

The share of small firms that reported a decrease in revenue rose to 33% in the week ended 9 January, according to the US Census Small Business Pulse Survey. That’s the highest since February last year.

Hundreds of millions of vaccine doses purchased by wealthy countries are at risk of going to waste, a new analysis shows, while large parts of the world remain unprotected amid the spread of the Omicron variant.

About 240 million doses purchased by the US, UK, Japan, Canada and the European Union are expected to go unused and expire by March, London-based analytics firm Airfinity said on Thursday in a report. The number of potentially wasted doses could climb to 500 million by that point if other countries receiving donated doses don’t have enough time to administer them, it said.

Covid-19 cases among US nursing-home workers jumped almost tenfold in recent weeks as the Omicron variant raced through the US’s senior-care facilities.

Cases are also spiking among nursing-home residents. About 32,000 residents tested positive last week, close to the previous peak in late 2020. While deaths have also increased, much of the nursing-home population is vaccinated and the death rate is about one-tenth what it was last winter.

The number of Africans being inoculated against Covid-19 needs to climb to 34 million people a week, from six million currently, if the least-vaccinated continent is to reach the World Health Organization’s target of 70% of its people fully covered by mid-year.

While vaccine supplies to the continent have improved recently, slow roll-outs are hindering efforts to reach this goal, Alain Poy, head of the WHO’s vaccine preventable disease programme in Africa, said in a briefing on Thursday.

President Joe Biden said his administration will double its order of rapid tests to send to Americans, while also distributing “high quality” masks to help fight a surge of cases of the Omicron variant.

The plan to buy another 500 million at-home tests comes as the US is facing a shortage, leading to long lines at testing centres across the country. At the same time, consumer prices for masks offering the highest protection are rising.

Biden said his administration is deploying military doctors, nurses and others to six hospitals in six states, including New York and New Jersey, to grapple with record hospitalisations.

Goldman Sachs delayed its return to office for staff in the US by another two weeks, with employees told they could delay returning to 1 February, according to a person familiar with the matter.

The bank’s management, aggressive champions of having its offices filled, had to check their desire after an about-turn last month amid a deluge of Omicron cases sweeping across New York and beyond.

Travellers from Canada, Australia and Argentina will no longer be exempted from the European Union’s travel restrictions. Member states agreed on Wednesday to remove the trio from a list of countries whose citizens are allowed to enter the bloc under the same conditions as in pre-pandemic times, officials said.

The change means that non-EU citizens won’t be allowed to travel from those countries if they’re not vaccinated, unless it’s for essential reasons.

Boris Johnson’s government cut the Covid-19 self-isolation period in England to five days from seven as the surge in Omicron infections sparked staff shortages at hospitals, schools and businesses. The reduction will take effect from 17 January.

The premier has relied on light-touch restrictions to manage the new virus wave, and his spokesman has pointed to early signs that UK cases and hospitalisations are starting to fall.

The UK had 3% of its workforce absent due to Covid in late December, the highest level since comparable estimates began in June 2020. Other services, which includes hairdressing and other beauty treatments, reported the highest absence levels at 7%.

UK travellers will no longer need to self-isolate or have an essential reason to enter France from Friday as long as they are vaccinated. The French government said the travel restrictions were no longer needed, given the Omicron variant was now widespread in both countries. All travellers will need a negative test less than 24 hours old.

Boris Johnson has cancelled a visit to a vaccination centre in Burnley after a family member tested positive for Covid-19, according to ITV. The UK Prime Minister won’t have to isolate, but is taking advice not to travel.

Johnson bought some breathing space by apologising for attending a party at his Downing Street office during the first pandemic lockdown, but anger in his ruling UK Conservative Party means his grip on power is precarious.

AstraZeneca touted fresh data supporting the use of its vaccine as a booster, potentially brightening the outlook for a shot that’s been sidelined in the US and Europe.

The Philippines’ daily infections reached a record high on Thursday, with 34,021 reported cases. The percentage of tests turning positive also rose to a record of 47.9%. Hospital beds across the Southeast Asian nation are nearing half capacity.

Senior Irish government figures have signalled they may ease restrictions later this month after a Cabinet meeting was cautiously optimistic, suggesting the worst of the pandemic may have passed, according to the Irish Times. Ireland reported 20,909 cases on Wednesday as the government relaxed self-isolation requirements.

Italy’s government is working on a spending package to bring relief to sectors hit by the surge in infections, such as tourism, and refinance furlough programmes, people familiar with the matter said. The measures could be announced as early as next week and would rely on existing resources, currently estimated at around €2-billion, the people said.

The United Arab Emirates plans to focus on testing and vaccination to keep its economy open amid a rise in cases, its trade minister said. “Omicron is way less impactful than Delta and even during Delta we haven’t locked down the country,” Thani Al-Zeyoudi, the minister of state for foreign trade, said in an interview with Bloomberg TV.

Qantas cuts a third of capacity

Qantas Airways is cutting flight capacity as the Omicron variant sweeps through Australia and across the globe, reversing an expected pickup in travel. Domestic capacity for the quarter is expected to be about 70% of pre-Covid levels, compared with a previous forecast of 102%, the carrier said. International capacity is seen falling to around 20% of pre-Covid levels from 30%.

Germany registered 81,417 new cases, a record for a second consecutive day, as the Omicron variant continues to spread rapidly in Europe’s biggest economy. The seven-day incidence rate per 100,000 people climbed to 428, closer to the all-time high of 452 scaled at the end of November.

Tokyo raised its Covid-19 alert to the second-highest level as the number of infections grows rapidly, with experts warning that Omicron is quickly replacing Delta. Officials also raised the alert over the medical situation by one notch from the lowest level. Japan’s capital was set to report more than 3,000 new coronavirus cases on Thursday, FNN reported, citing an unidentified official.

Crowds at the Australian Open will be capped at half capacity as authorities in Melbourne worry about increasing Omicron infections and hospitalisations. Spectators will be required to wear face masks and density limits will apply for all indoor hospitality areas when the tennis tournament starts on Monday.

Victoria’s healthcare system is under pressure as thousands of its workers are furloughed after being exposed to the virus. The state recorded 37,169 new infections on Thursday, up from 7,442 at the start of the year, while hospitalisations have more than doubled to 953 in the same period.

China detected Omicron in a second major port city, deepening concern of a wider outbreak at Beijing’s doorstep and raising the prospect that more foreign businesses might follow Toyota in halting operations along the northeastern coast.

Chinese officials said on Thursday that at least one person was infected with Omicron in Dalian, a city of seven million. A second person in Dalian had also tested positive with the virus, but the variant is unknown.

A broader spread of Omicron is bad news for China. With just three weeks to go before the Winter Olympics are set to begin in Beijing, China has put in place some of the world’s toughest measures to stamp out the virus. DM/MC