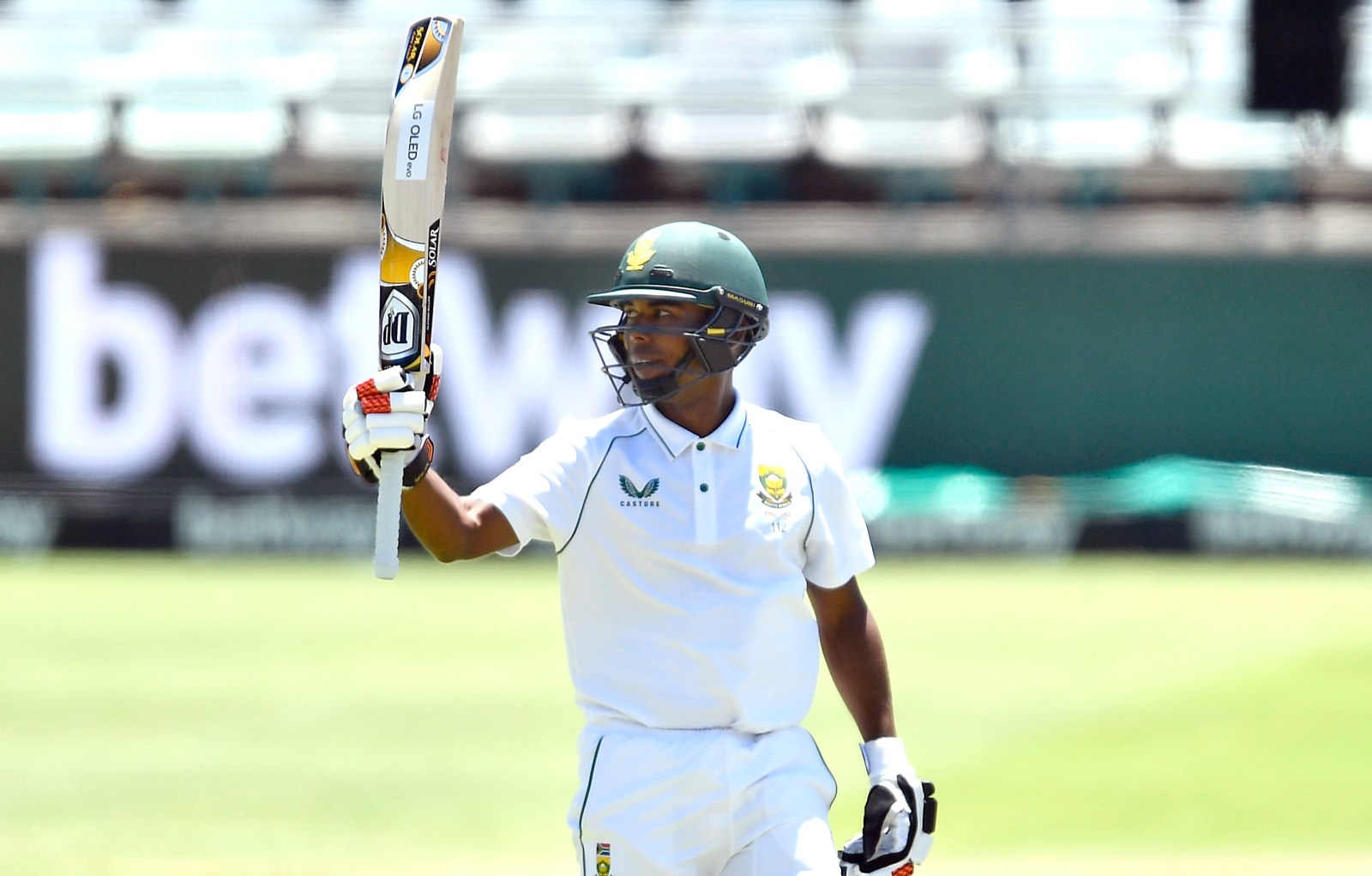 Keegan Peterson of South Africa celebrates scoring a half century on day two of the third Test against India at Newlands in Cape Town on 12 January 2022. Peterson went on to make 72 runs, the top score for his side. (Photo: Ashley Vlotman / Gallo Images)

India’s premier fast bowler, Jasprit Bumrah, tipped the balance of the third and deciding Test in favour of the visitors with a brilliant five-wicket haul. His figures of five for 42 off a mammoth 23.3 overs in blazing heat are impressive enough, but they could have been even better.

On a day when all the seamers beat the outside edge of the bat with disturbing frequency, Bumrah endured his fair share of bad luck. In addition to numerous plays and misses by South Africa’s batters, Bumrah also induced several edges that fell short of the slip cordon. On another day he might have bagged eight wickets.

As it was, it was a mighty effort that saw South Africa dismissed for 210 after starting the day on 17 for one. They were left 13 runs short of India’s first innings total and face the daunting prospect of chasing a sizeable target in the fourth innings.

By stumps India were 57 for two in their second innings — a 70-run lead already and with skipper Virat Kohli at the crease. The portents are grim for the Proteas and it will require one, or more, of their seam unit to reproduce a Bumrah-esque performance to keep the lead from soaring out of control.

The key is obviously to keep India’s second innings total below 200. That will be easier said than done, although Kagiso Rabada bowled an inspiring spell late in the day. He removed opener Mayank Agarwal with a peach. He clipped the edge of the bat and was comfortably caught by Dean Elgar in the slips. It was just reward after he went past the edge six times with his first 15 balls.

Left-arm seamer Marco Jansen backed up Rabada’s work, removing the dangerous KL Rahul in his first over, caught sharply at second slip by Aiden Markram for 10. It was a superb response by the Proteas, but their issues are not in the bowling department.

The batting lineup hasn’t been able to adequately back up the bowling unit — with the exception of the run chase at the Wanderers. It doesn’t help that for most of the series, and certainly in the first innings at Newlands, the Indian bowling attack gave the Proteas almost no loose balls to release the pressure.

The Proteas managed to chase down 240 in the second Test at the Wanderers, but it was a rare achievement. It was only the second time in a decade they scored in excess of 240 in the fourth innings to win a Test.

Leading from the front

Doing something similar twice in the space of 10 days is unlikely, especially if Bumrah produces the same form when he has the ball in his hands again.

His stuttering “walk-up”, as one colleague wryly remarked, belies the speed and whip he produces with a hyper-extended elbow. If he becomes bored with cricket, Bumrah could always successfully take up javelin. He bowled with control and aggression and as with all the great teams, received excellent support.

Bumrah was the tormentor-in-chief, but with backup from the bustling Mohammed Shami, as well as Umesh Yadav and the deceptive nuance of Shakul Thakur, almost every ball tested the batters’ technique and composure.

It was a parsimonious display by the India quartet, who again relegated the world’s best spinner, Ravi Ashwin, to the status of bit player in this drama.

Bumrah, who had removed Elgar in the twilight on day one, was quick to display who was the alpha player within minutes of the start of play on day two. He needed just two balls to set the tone.

Proteas opener Markram, who has endured a torrid series with the willow, shouldered arms to a ball pitched outside off-stump. But to the batter’s horror, it jagged back and clipped the top of off-stump. It always looks bad when bowled while leaving, but the movement off the seam was profound.

Later Bumrah produced a similar beauty to remove Jansen just before tea, who at least tried to play the ball, but suffered the same result as his stumps were rearranged.

Proteas No 3 Keegan Petersen was again thrust into action sooner than hoped on a day that started with promise for the home team and ended in consternation.

He showed his growing maturity with a very good 72, scored patiently from 166 deliveries, but he ultimately fell to Bumrah as well. Early on, Petersen played and missed several times, but his ability to put the errors aside despite lively chirping from the India cordon, led by Kohli, underlined his development throughout the series. He will have a big role to play again.

“It is extremely challenging to face this attack. They do not offer many scoring opportunities and come at you all the time,” Petersen said after the match.

Keshav Maharaj, who came in as night watchman on day one, rode his luck and played some sumptuous drives while making a useful 25. He has scored more runs than Markram in the series so far, but was always destined for a cameo and not the lead performance.

Petersen provided the glue, but significant partnerships were scant. He and Rassie van der Dussen put on 67 for the fourth wicket, while Petersen and Temba Bavuma added 47 for the fifth wicket.

Petersen and Van der Dussen took South Africa to lunch at a promising 100 for three. But with Bumrah and Co fed and rested after the interval, the afternoon session belonged to India.

But in the space of three balls Shami ruined that narrative by removing Bavuma for 28, caught at slip by Kohli. Two balls later Kyle Verreynne was on his way, caught by keeper Rishabh Pant for a duck.

From a comfortable position at lunch, the innings unravelled with the Proteas reeling at 176 for seven at tea when Jansen fell.

After tea, the Proteas’ last realistic hope of erasing the deficit disappeared when Petersen edged Bumrah to Cheteshwar Pujara at first slip. DM