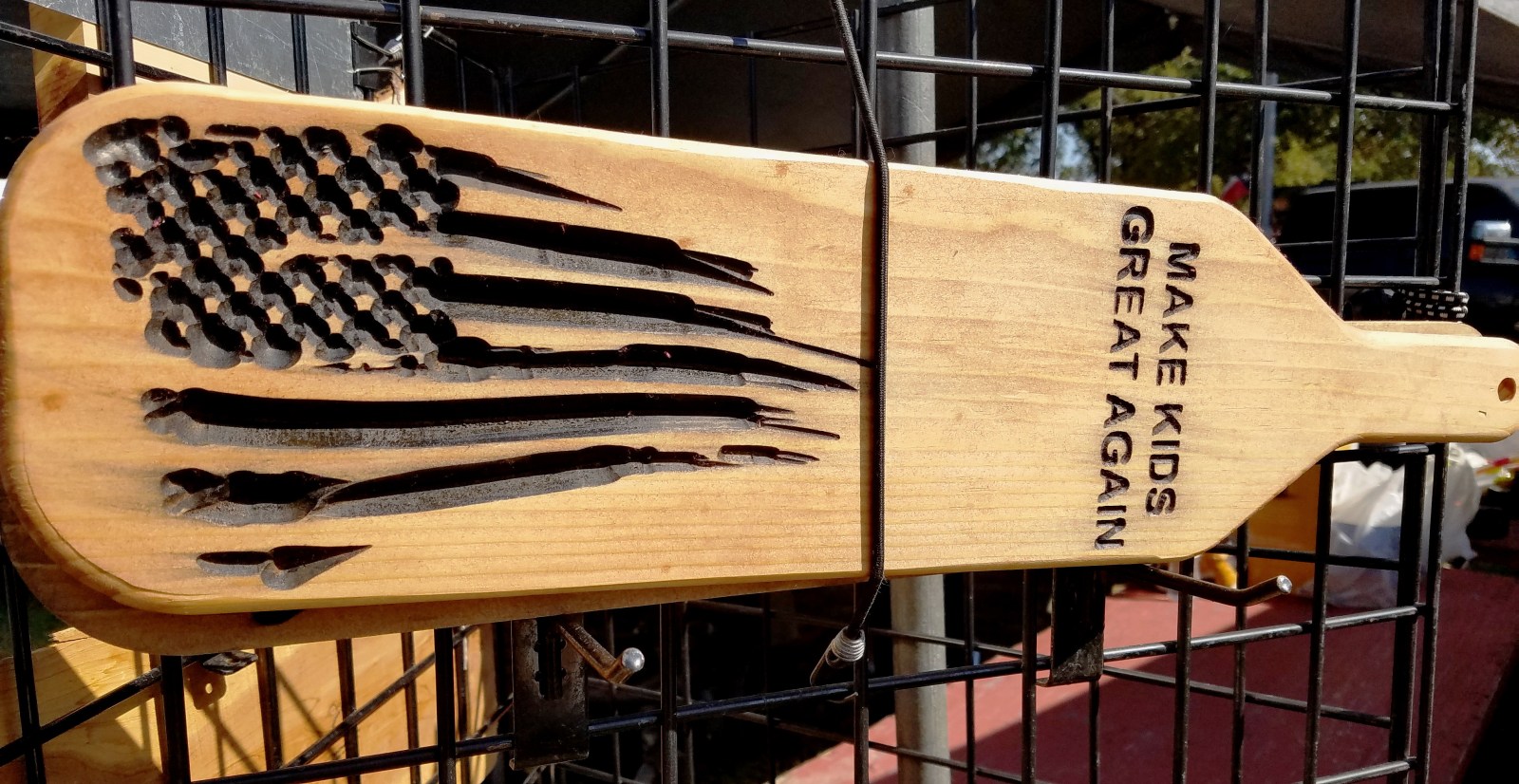 A spanking paddle to discipline children which bears a twist to the Donald Trump slogan. Image: Gilbert Mercier/Flickr

When I was a child I went to school in South Africa. This was the late 1970s. At school, the teachers would hit us. It was called getting the cane, the cane being a long, flexible stick. This tradition, exported from a Dickensian Victorian English model, was very popular with some teachers. They were seen as terrors: you didn’t want to get the cane from them. There was one teacher in particular who would use the cane a lot. We were all petrified of him, and we hated him at the same time.

Often boys would be caned in public. Once I was caned on a sports field in front of a group of students. They thought it was funny. On one occasion, I was sent to the headmaster’s office. He was a tall, solemn-looking man who wore a black headmaster’s gown. He ordered me to place my head under a table and gave me two strokes. I remember crying, but it wasn’t from the physical pain, it was from the humiliation.

There are still many schools in the world where it continues illegally. In fact, in Kenya as I write this article, in the wake of unrest by students, there is increasing pressure to bring corporal punishment back to schools.

In an article I wrote in 2020, I pointed out that there are many forms of violence in education: symbolic, structural and physical. Corporal punishment is at the centre of this. It is a practice that is ineffective, causing misery to millions of young children who are not yet formed adults. It does not work and it should stop.

There are many adults who think that corporal punishment is a good idea. But here are four reasons why it does not work.

Learning and the brain

Neurobiology tells us that learning is an emotional matter: the success with which new information will be processed depends on the emotional state of the learner. When we are in a state of panic, the brain is in fight or flight mode and cannot integrate information deeply, let alone allow for intellectual expansion into higher order thinking such as synthesis, creativity or evaluation. If students are in fear of being hit, they are distracted with worry and in no state to integrate new information harmoniously.

It is true that behaviour can be regulated by punishment. In the late 1940s, the American psychologist BF Skinner showed in his theory of operant conditioning how, if someone is hit as a deterrent, over time they might stop the punishable action to avoid being hit (although not always). However, if this works, it is not learning, it’s behavioural regulation. And if the goal of punishment is to regulate behaviour, violent punishments are simply not necessary since many other, more humane deterrents, are sufficiently effective.

In any school, there will be young people who will not listen to instructions, who will test limits and therefore bring a number of sanctions upon them. The world of punishment is not a pleasant one. However, when students continue to break school rules, there must be some escalation of sanctions, ultimately leading to exclusion. This is to indicate a progressively severe level of punishment in response to reprehensible behaviours.

When the punishment is physical, however, the only recourse is for the physical punishments to become more and more severe. This can become extremely dangerous as beatings become stronger and stronger, causing more and more physical and mental damage. This is the nightmarish scenario of the stubborn student who will not change and, as a result, is beaten more and more brutally.

Corporal punishment models a brutal vision of society and may well lead young people to beat other young people. A 2014 study in Brazil found a positive correlation between incidents of bullying and violent discipline methods. If schools wish to model a vision of peace and respect, then positive discipline and restorative practice are more likely to influence change than corporal punishments.

There are long term psychological effects of corporal punishment, leading to psychological maladjustment. These may only manifest themselves indirectly or many years after the experience. Hitting children in schools can scar them for life. A recent study shows that spanking can have serious neurological effects on young people, similar to those endured after severe maltreatment.

Of course there are exceptions: those students who tolerate the beatings, correct their behaviours quickly or avoid punishment altogether. There are also those who suffer from corporal punishment as children but, perhaps as a result, turn against the idea very strongly as adults, never laying a hand on a child’s head because of it. But these depend on many personal, intertwined factors and can hardly be described as the rule.

Conrad Hughes is a research associate at the University of Geneva’s department of Education and Psychology as well as the Campus and Secondary Principal at the International School of Geneva’s La Grande Boissière, Université de Genève.