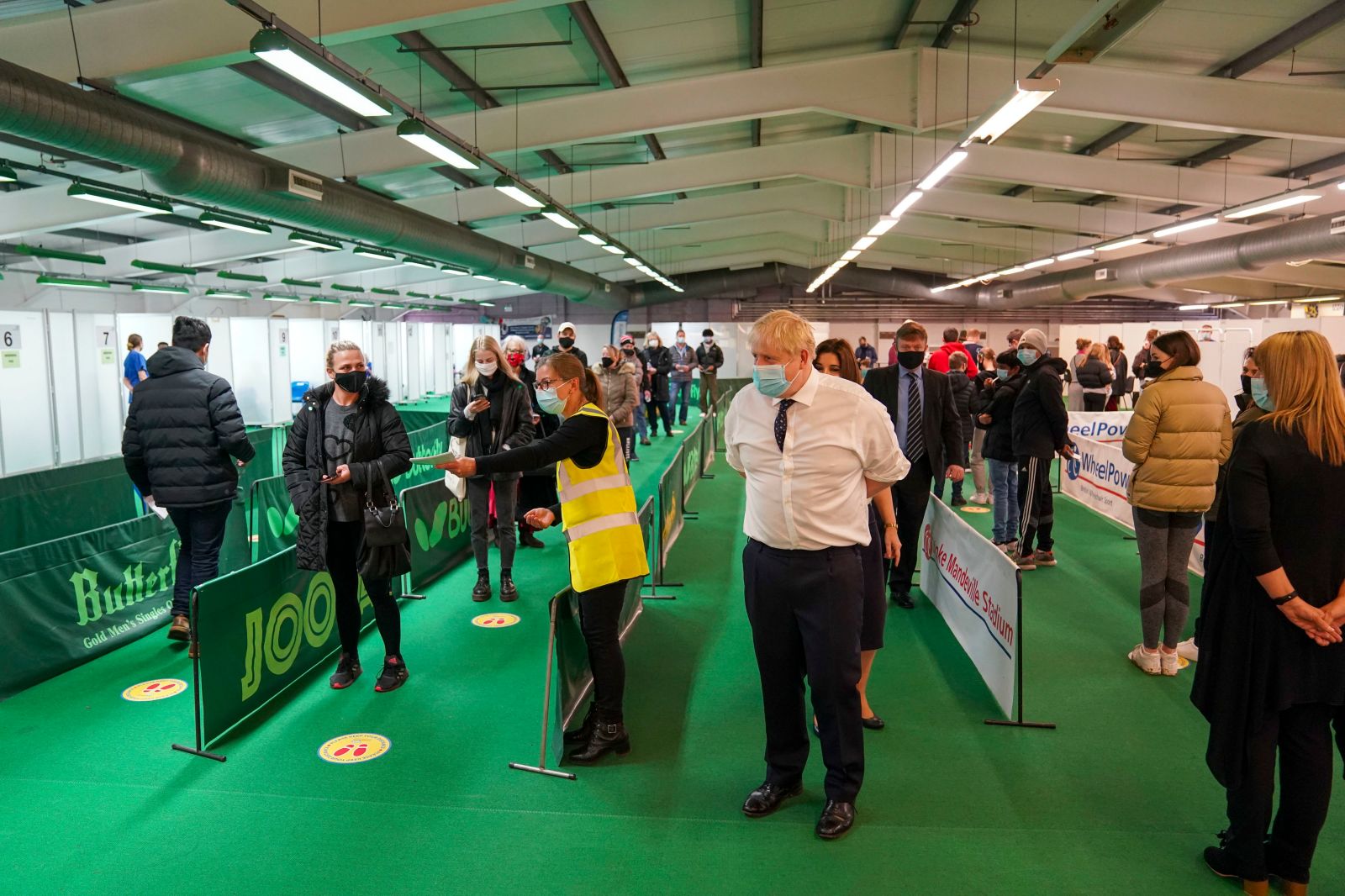 A record 10 million people were diagnosed in the seven days through Sunday – almost twice the previous weekly high, as Omicron spread across the globe. Businesses in Puerto Rico will have to shut from midnight to 5am after the commonwealth registered one of the biggest case jumps of any U.S. jurisdiction.

U.K. Prime Minister Boris Johnson warned that the pandemic is far from over. Russia reported the lowest number of cases since June, while Germany began weighing up new measures in the face of rising infections. 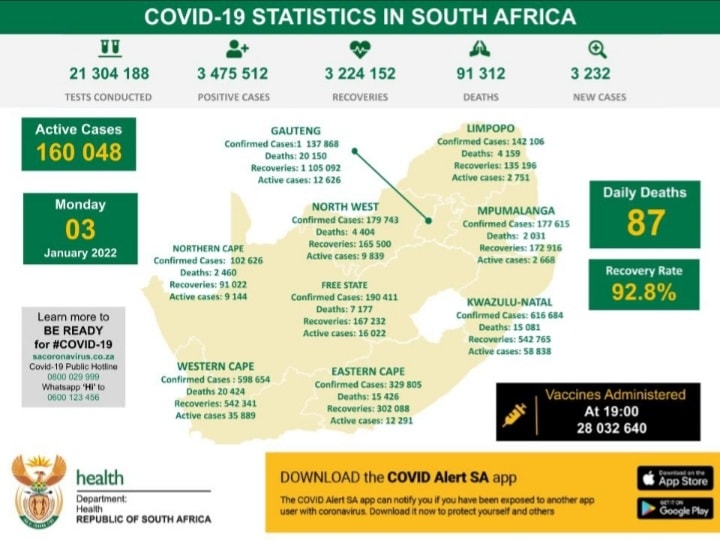 Public sector employees in the city are required to be fully vaccinated. A private sector mandate went into effect Dec. 27, requiring employees to get a second dose within 45 days before they can enter their workplaces.

Adams said he has urged banks and other businesses to bring workers back to offices.

“You can’t run New York City from home,” he said.

Starbucks will require U.S. employees to get vaccinated or submit to weekly testing by Feb. 9, in line with government standards for large employers. Workers must disclose their vaccination status by Jan. 10. The chain will require employees who choose not to vaccinate to pay for their own tests.

Two French legislators said they received death threats as Parliament moves towards requiring proof of vaccination for access to public venues and transportation.

Agnès Firmin Le Bodo of the centre-right Agir party tweeted an email she received with threats to kill her over her support for the vaccination pass.

“Our democracy is in danger,” she wrote.

Forty-five passengers tested positive on Italian cruise ship MSC Grandiosa, which arrived at Genoa, Italy, from Marseille, the MSC Crociere cruise line said by email. The patients were isolated and were sent home while taking protective measures, the company said.

U.S. regulators granted emergency-use authorisation (EUA) to give Pfizer Inc.’s booster shot to people aged 12 to 15. The Food and Drug Administration also reduced the recommended interval to five months between the second and third doses of the messenger RNA vaccine, which was developed with BioNTech SE.

The agency said that immune-compromised children aged five to 11 could receive a third primary-series shot at least 28 days after their initial two-dose immunisation.

A Centers for Disease Control and Prevention expert panel is expected to meet as soon as this week to discuss the EUA and make recommendations about how to dispense the shots.

New York City Mayor Adams tried to reassure parents of the 1 million public school students that it was safe to return to classes on Monday, despite a surge in cases, staffing shortages and no testing requirement.

“The message has been clear; Our schools will be open,” Adams said on MSNBC. “Schools are the safest place for our children.”

The city’s seven-day positivity rate exceeded 32% on Dec. 30 and reached nearly 45% in some areas of the Bronx, according to city data. Seven-day average hospitalisations more than tripled since mid-December to 447 on Dec. 30.

Businesses in Puerto Rico will have to close from midnight to 5am starting Tuesday as the commonwealth registered one of the biggest infection surges of any U.S. jurisdiction.

Also, alcohol sales will be banned during those hours and all events of 250 people or more will be prohibited. The new restrictions run through Jan. 18.

“We all want the contagion level to drop so that we can protect our boys, girls and youth so they can go back to school safely,” Governor Pedro Pierluisi said as he signed an executive order Dec. 31.

Puerto Rico, a U.S. territory of 3.3 million, has the highest vaccination rate of any U.S. jurisdiction.

Boris Johnson warns that the pandemic is not over

British Prime Minister Boris Johnson said the U.K. is in a much better position with the virus than last year but said it would be “absolute folly” to think the pandemic is almost over, the BBC reported.

The French government said it would ease access to crisis funds and could delay loan repayments for businesses struggling with a drop in activity as a surge in Omicron cases hits tourism and leisure activities.

Hong Kong is using several methods to find six diners who may have been exposed to the coronavirus, in its first cluster of local Omicron infections.

Officials have identified 201 out of 207 patrons of the Moon Palace restaurant where a crew member from Cathay Pacific Airways Ltd., who was subsequently found to be infected with Omicron, was eating lunch with his family on Dec. 27.

Five other customers later tested positive, and 191 have been sent to a government-run quarantine centre where they will be tested regularly.

The country has detected 194 cases of the Omicron variant since reporting its first case of the new variant two weeks ago, the health ministry said.

Mokgweetsi Masisi (59) underwent a routine test and doesn’t have symptoms, his office said by email.

He is in mandatory self-isolation at his official residence and Vice-President Slumber Tsogwane will temporarily take over presidential duties. The country has reported 219,509 cases and 2,444 deaths.

Visitors to the Nigerian presidential compound will be required to test for the coronavirus before entering, the Cable newspaper reported, citing a spokesperson of President Muhammadu Buhari (79). Almost 244,000 infections have been recorded in the country since the pandemic began, according to the Nigeria Centre for Disease Control.

Saudi Arabia reported 1,746 new coronavirus cases, the most since July, and officials warned of the potential for new restrictions.

The kingdom’s surge is driven by the Omicron variant, following crowded public events held last month, including a music festival attended by more than 700,000 people. Two new deaths were reported. About 66% of the population has received at least two vaccine doses.

The Danish health agency expects the surge in the Omicron variant of the coronavirus to peak later this month, with fewer hospitalisations compared with earlier strains, leading to an improvement by March, a senior health official told broadcaster TV2.

Patients with Omicron are as much as 50% more likely to avoid hospitalisation than patients with other variants, Tyra Grove Krause, a director of the Statens Serum Institut, told the broadcaster, citing data from the U.K. and South Africa.

Germany is contemplating further measures to protect critical services as the Omicron variant threatens to become the dominant strain by mid-January.

“There are very many questions that need to be settled, and preparations are in full swing,” he said late Sunday on RTL/ntv television.

Russia registered the lowest number of new cases since June. There were 16,343 new infections in the past day, according to the government’s reporting center. The number of deaths stood at 835, the lowest since early October.

Singapore warns of an Omicron wave

Omicron infections in Singapore climbed, making up about 17% of local cases and suggesting that a wave of this variant is coming, Health Minister Ong Ye Kung said on Facebook.

ICU numbers meanwhile were the lowest in the last quarter and active local cases over the past week were a small fraction of what they were at the peak, he said. The factors indicate that a wave from the Delta variant has subsided, at least for now, Ong said.

Indonesia reduced the mandatory quarantine period for incoming travellers, bucking the trend in a region that’s tightening border rules to slow the spread of the Omicron strain.

People arriving from overseas will need to quarantine for at least seven days, instead of 10, while those arriving from countries with high infection rates must quarantine for 10 days, from 14 previously, according to Coordinating Minister for Maritime and Investment Affairs Luhut Panjaitan.

Almost twice as many people were diagnosed in the past seven days as the pandemic’s previous weekly record, in late April.

The highly Omicron variant drove cases to 10 million in the seven days through Sunday, up from a previous record of 5.7 million. The surging number comes as many people have given up on testing or are using at-home kits with results that aren’t reported to local authorities.

Weekly deaths dropped to their lowest level in more than a year.

The country recorded its highest number of infections since the pandemic began, with more than 37,000 daily cases. DM