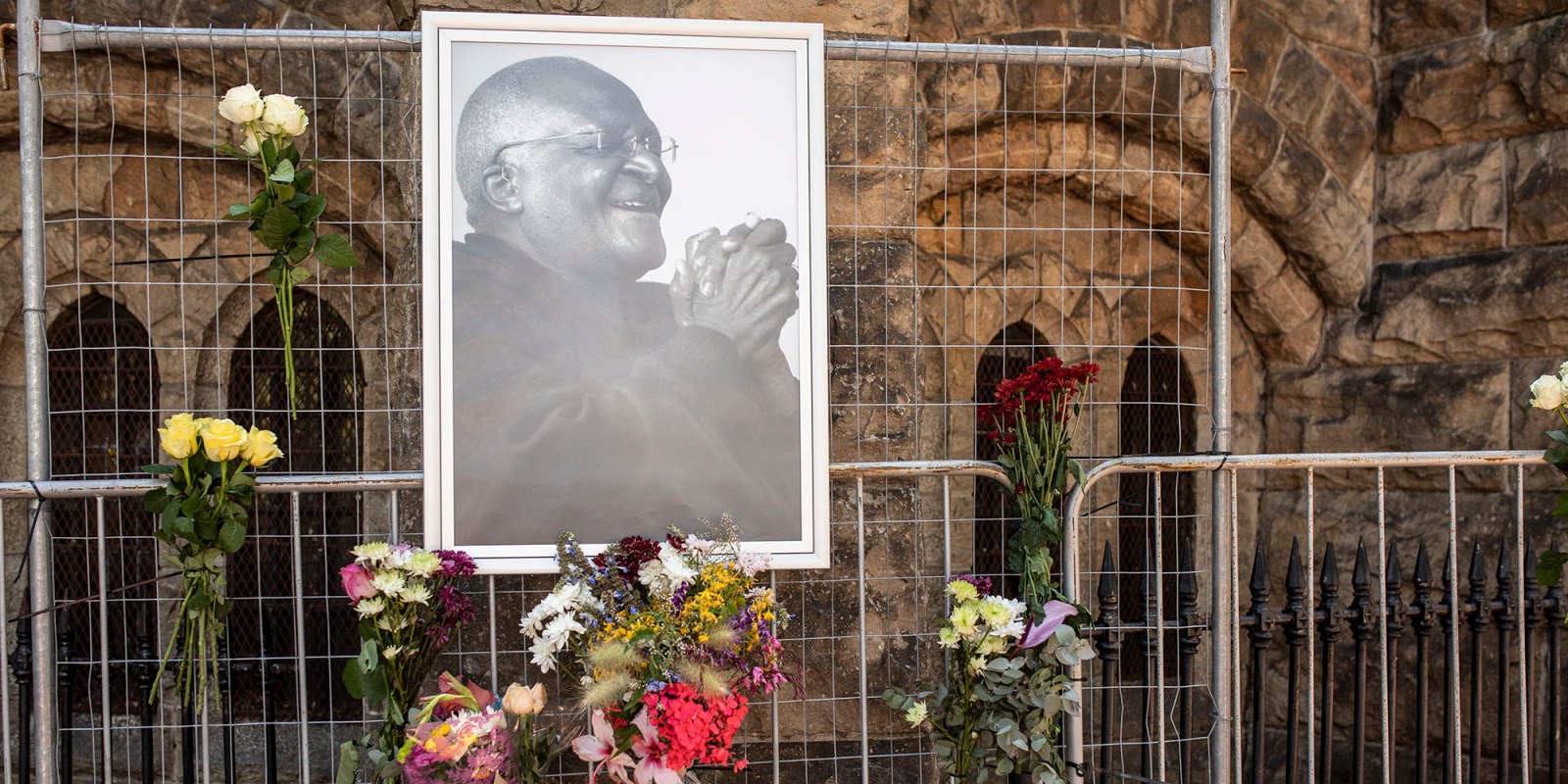 A photograph of the late Archbishop Emeritus Desmond Tutu is displayed outside St George's Cathedral in Cape Town, South Africa, on Sunday, 26 December 2021. The anti-apartheid stalwart and Nobel Peace Prize laureate will be remembered for his work during South Africa’s Truth and Reconciliation Commission, his commitment to justice and poverty alleviation, speaking truth to power, and his sense of humour and infectious laughter. (Photo: Leila Dougan)

Mourners gather at St George’s Cathedral in Cape Town to pay their respects to Nobel Peace Prize laureate and fierce anti-apartheid activist Archbishop Emeritus Desmond Tutu, who passed away on Sunday, 26 December 2021, at the age of 90.

Wale and Adderley Street roads were closed off in the city while young and old alike dropped off flowers and signed condolence books supplied by the City of Cape Town. Speaking to members of the media outside the cathedral, Mayor of Cape Town Geordin Hill-Lewis said Table Mountain, City Hall and the Arch on the corner of Wale and Adderley streets would be lit up in purple each evening until the official funeral to pay tribute to Tutu, who was the first black Archbishop in South Africa and played a significant role in the anti-apartheid movement.

“We mourn the passing of the greatest Capetonian, and one of the last giants of our time. The Arch and Madiba were a formidable pair who together served as South Africa’s moral compass, and vocal and critical conscience. Their unforgettable partnership will leave a lasting legacy in helping to heal the wounds of our country,” Hill-Lewis said.

District Six resident Susan Lewis said Tutu spoke truth to power. “He treated everyone the same, no matter where you came from, and I loved him. He was tough. He’s a small man but someone is going to have big shoes to fill. Our hearts go out to Leah and we pray she will find peace,” said Hill-Lewis.

Father Andrew Wyngaard recalled the anti-apartheid protests that Tutu led throughout the dark days of apartheid, including the one on 13 September 1989 when the icon led 30,000 people in a march against the oppressive system. Wyngaard said Tutu’s legacy will live on, not only because of his actions during apartheid, but because, even in the democratic era, he advocated peace and justice.

“We are living in a country of great sadness. Corruption is causing struggle. We are living in devastation and poverty. We are living in shanties and Wendy houses without water. We hope and pray that our current government will take a page from what they’ve seen in Desmond Tutu’s teaching, and help us to become the nation that we could become. We are going to miss this man,” said Wyngaard.

“Desmond Tutu has been a father for all of us in South Africa. If you want to live a principled life, he’s the one to follow. I want to honour and thank him. I wanted to come and pay my respects to someone who made our country what it is today,” said Marlene van den Berg, who came to drop off sunflowers and took a moment to remember the man who spoke out against human rights abuses and chaired the Truth and Reconciliation Commission.

Little Amelie van Heerden (5) looked up at his image and asked her mother: “Is that him mommy?” She signed her name and drew a flower in one of the condolence books before leaving with her parents.

“He’s been such a great part of our history as a stalwart of human rights and activism, and standing for the vulnerable. And that’s really touching. He’s been a conscience; he’s been the compass of morality in the country and always been there to comment when things have been going the wrong way in our country. He will be sorely missed,” said Stephen Laverick.