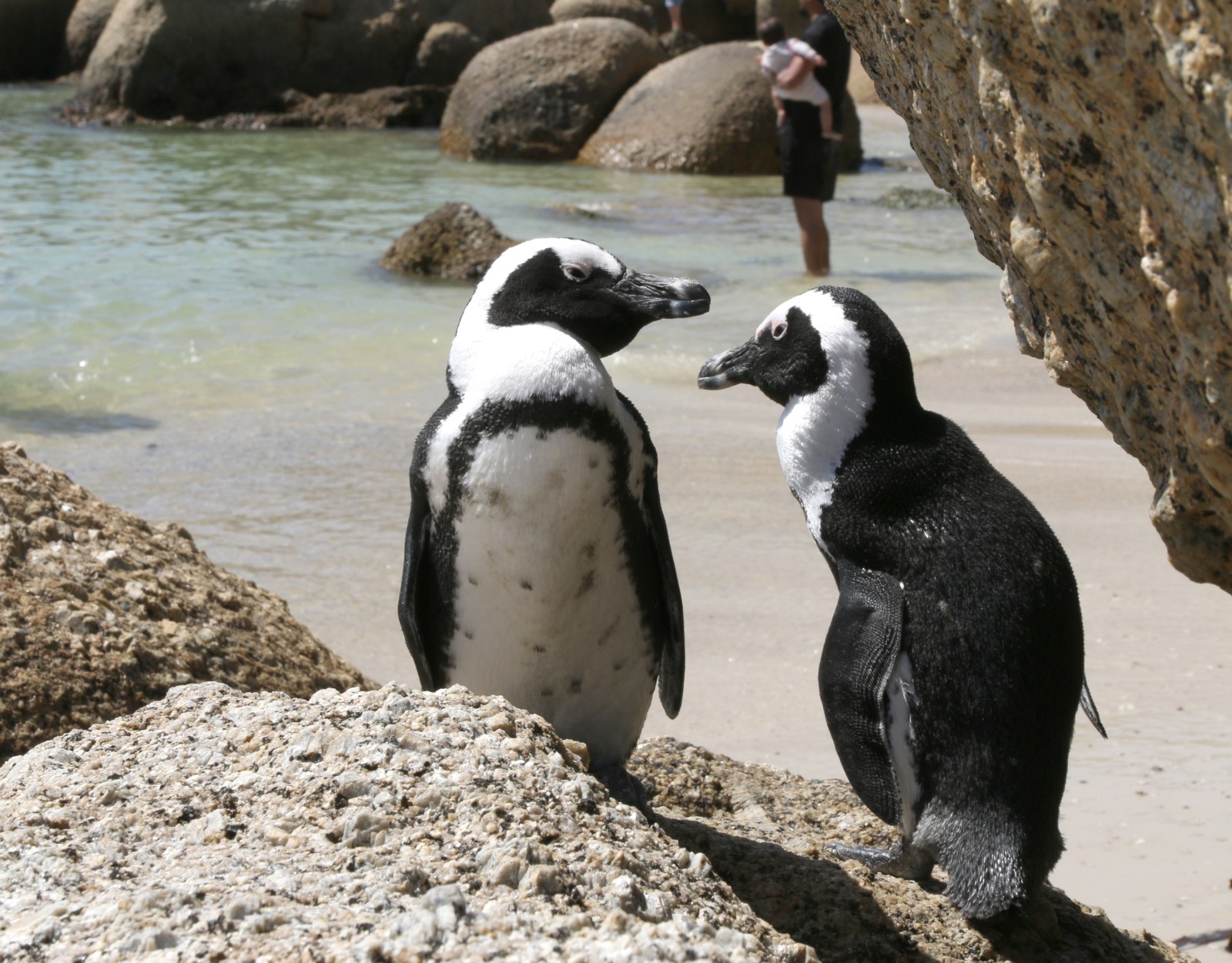 While the tourist-attracting penguin population in Simonstown is relatively stable, penguin colonies elsewhere on our coast are collapsing due to low numbers of sardines and anchovies, their main food source. Photo: Steve Kretzmann

The penguins at Boulders Beach are a huge tourist drawcard, but these charismatic birds are in trouble because their main food source is under threat

African penguin populations are plummeting along with sardine stocks. As are Cape gannets and Cape cormorants, who also feed almost exclusively on the small pelagic fish. The penguins at Boulders Beach in Simonstown are safe as a tourist attraction, for now. The population has been relatively stable over the last five years but researchers believe overfishing is decimating colonies elsewhere along our coast.

Sardines, together with anchovies and red-eye round herring comprise 90% of our small pelagic fishes, and are the main food source for these endangered birds. But overfishing of already low populations of these fishes, which spawn on the Agulhas Bank off the southernmost tip of Africa and then develop up the west coast and along the south coast, is resulting in the loss of one African penguin colony every three years since 2004, and seven are currently “in trouble”, says Dr Lauren Waller, a research fellow at the Southern African Foundation for the Conservation of Coastal Birds (Sanccob).

Speaking at a webinar on the sardine crisis hosted by the Institute for Poverty, Land and Agrarian Studies earlier this month, Waller said African penguin breeding populations had decreased by 73% over 30 years, from 42,500 breeding pairs in 1991 to 10,400 pairs in 2021.

This was part of a historical loss of over 95% of the African penguin population, listed as endangered.

Seabirds have to compete with fisheries for food

She said a “substantial amount of work” showed a close relationship between African penguin populations and their preferred prey. Beyond the biomass of these small pelagic fishes and that of penguins tracking very closely, penguins were also affected when what fish there are, move outside their foraging range.

With the small pelagic fish population of Namibian waters having collapsed to the point of their being a moratorium on sardine and anchovy fishing there since 2017, the African penguin colonies there have also “pretty much collapsed”.

When there are already low sardine and anchovy populations, penguins having to compete with fisheries has “that much more impact”, said Waller.

She said the government has been experimenting with alternating periods of banning sardine and anchovy fishing in the vicinity of Robben Island and Dassen Island up the west coast since 2008, with results revealing fisheries reduce the availability of prey for penguins.

Studies on closure of small pelagic fishing activity surrounding Bird Island and St Croix Island in Algoa Bay in the Eastern Cape showed penguins had to travel much further to forage for prey when fishing took place in the vicinity.

This meant parents had to be away from the nest for longer periods of time, affecting chick survival rates.

Penguins also have a catastrophic moult every year, in which they replace all their feathers over three weeks. They cannot feed during this period and thus need to add 40% to their body weight in order to survive. Swimming further to find prey meant they struggled to accumulate the reserves necessary to survive the moult and still have enough energy to hunt successfully afterwards.

Additionally, penguins hunt better in large groups, so as the number of penguins decline, their foraging efficiency decreases.

Sanccob research manager Dr Katrin Ludynia says as far as she knows, there has been no fishing for anchovy and sardine in False Bay using purse-seine nets since 1980, and the False Bay colony at Boulders Beach and Simon’s Town has remained relatively stable in recent years.

The Simon’s Town population has fluctuated between about 800 and 1,000 breeding pairs for the last 10 years, having grown after the first pair waddled onto the rocks in the early ’80s, said Ludynia.

This was despite the Simon’s Town colony facing not only the same threats as other penguin colonies, such as climate crisis risks, disease, oil spills and noise pollution at sea, but additional mainland-based threats such as caracal (more than 100 penguins have been lost to a single caracal in a year), as well as dogs, cars and disturbance by humans. Yet, unlike other colonies, they are not threatened by lack of food in competition with fisheries, which indicates this is a significant driver of population declines elsewhere.

Waller said similar trends in relation to sardine and anchovy availability were observed with the endangered Cape gannet and Cape cormorant populations.

Waller said there were only three Cape gannet colonies left in the world: in Lambert’s Bay, Malgas, and Bird Island. The colonies in Namibia crashed along with their small pelagic fishery, as did colonies of Cape cormorant.

Speaking about the small pelagic fish (sardine, anchovy, red-eye round herring) populations, World Wildlife Foundation SA marine programme senior manager Craig Smith said the small pelagic species, 90% of which are sardine, anchovy, and red-eye round herring, sustain the largest fishery in South Africa. This is both by volume caught and jobs created through fishing and canneries. It is a R3.4-billion industry, with 5,800 employees, 75% of whom are full time, according to the South African Pelagic Fishing Industry Association.

Smith said while anchovies were predominantly reduced to fishmeal for the agricultural industry, sardines were canned for human consumption and were important as an affordable source of high-value protein for low-income households in South Africa and neighbouring countries.

He said the small pelagic fish also played an important ecological role as food for seabirds and other predators including sharks, whales, seals and other fish. As such, they were often used to gauge the health of the broader ecosystem.

He said small pelagic fish populations were closely monitored and total allowable catch (TAC) determined by the Department of Forestry, Fisheries, and the Environment (DFFE).

Normally, industry caught 100% of the TAC but had not been able to catch the full allocation since 2016. This was further evidence of a “problem with biomass level”.

There have also been shifts in distribution, with larger populations of sardine and anchovy now occurring along the south coast rather than the west coast, as was traditionally the case.

Smith said there were “some indications” this may be due to climate change, but overfishing along the west coast could also play a part.

Low sardine populations also meant the local small pelagic fishing industry was now mostly dependent on anchovy. A switch in fortune as sardine was the “high value” catch. As a result, more than 70% of sardine were now imported by canneries in order to keep their operations going.

Smith said the Namibian situation was an important case study. It had a peak catch of 1,4 million tons of sardine in 1968 – three times that of South Africa’s 2004 peak – but the sardine stock crashed in 1970, resulting in a switch to anchovy. That also collapsed, leading to some canneries closing and jobs being lost. Scientists called for the closure of the Namibian small pelagic fishing industry in 1995, but were ignored. The last TAC in Namibia was 14,000 tons in 2017, with the industry having been closed since 2018.

“We need to take the lessons from Namibia to ensure our fisheries don’t follow the same route,” said Smith, with a resultant impact on other species, and our own food security and jobs.

Fisheries ecologist at DFFE Carl van der Lingen, who was invited to comment in the webinar, said small pelagic fish populations are known to have large fluctuations, for a variety of reasons.

Van der Lingen said there was a peak in the mid-’60s, after which populations declined to very low levels for “about 30 years” before rebuilding up to the catches seen in the early 2000s.

Presently the small pelagic fish population is designated as depleted, he said, but “these things are known for coming back from low levels”.

The department was aware it needed to persuade industry to develop products for human consumption “out of our other resources”, and a factory on the south coast was now canning red-eye round herring. DM/OBP