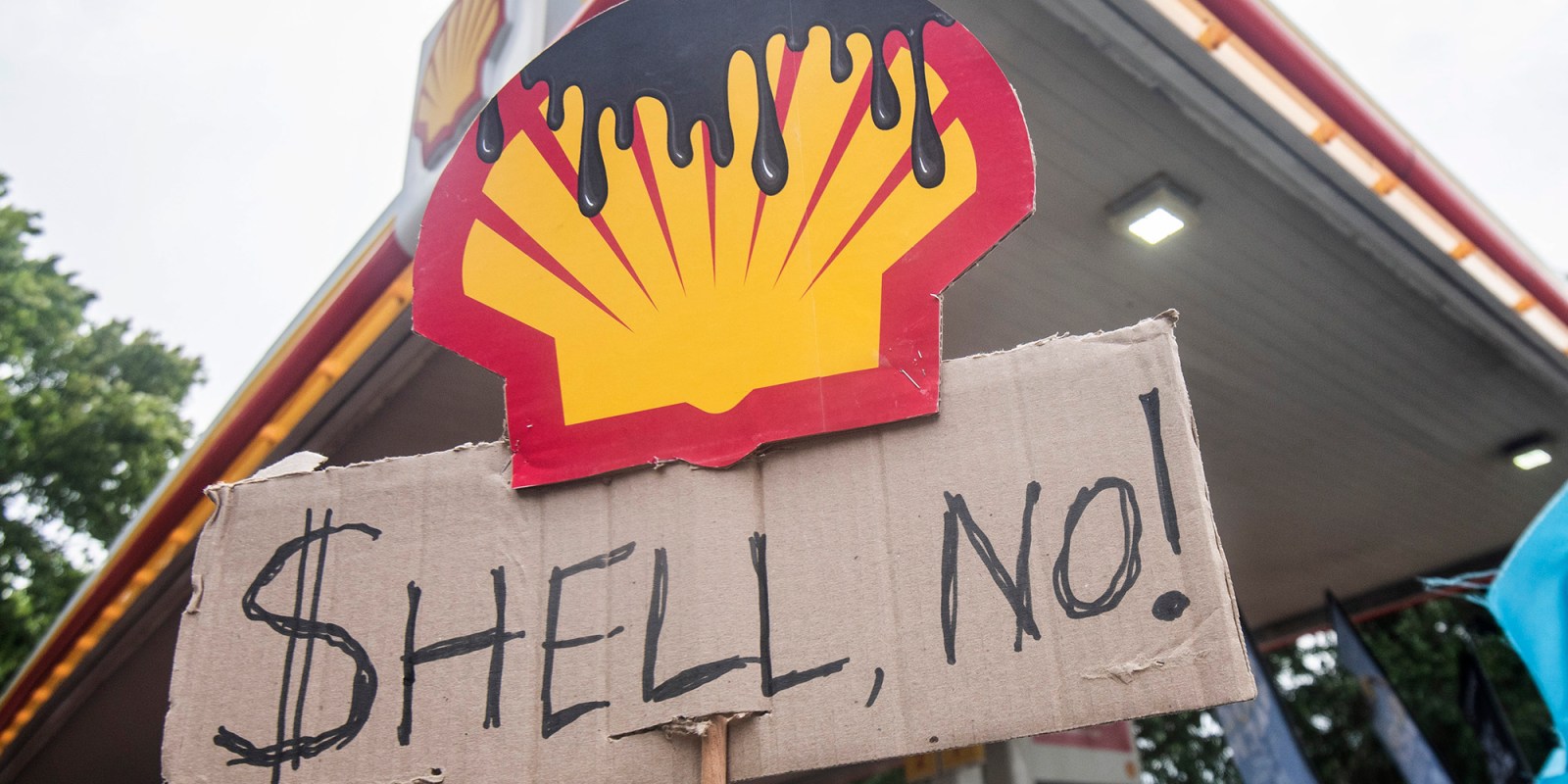 Activists and protesters stand along the M3 at the Shell garage in Newlands during a protest against the 3D seismic survey commissioned by Shell on 4 December 2021 in Cape Town, South Africa. (Photo: Gallo Images / Brenton Geach)

The courts have become the battleground for environmental activists, who are trying to stop Shell’s exploration along the Wild Coast.

The Makhanda High Court has been a hive of activity this December as environmental activists take their fight against Shell’s seismic survey on the Wild Coast to court.

After seven hours of hard-hitting legal debate, Bloem adjourned the hearing and reserved his judgment until further notice.

This application follows an earlier urgent interdict application, brought by the Border Deep Sea Angling Association, the Kei Mouth Ski Boat Club, Natural Justice and Greenpeace Africa, which sought to stop Shell from commencing seismic blasting off the Wild Coast. Acting Judge Avinash Govindjee dismissed this application on 3 December 2021, finding that there was no reasonable apprehension that Shell’s seismic blasting would cause irreparable harm.

On Monday, 20 December, the environmental and human rights organisations filed an application for leave to appeal Govindjee’s judgment.

In his ruling, Govindjee dismissed the application, until the applicants could return to court with more expert evidence of the harm that would be caused, and to argue that Shell did not have the necessary environmental authorisation under the National Environmental Management Act (NEMA).

Govindjee also ordered the applicants to pay the legal costs of Shell and the Minister of Minerals and Energy.

According to a statement by the applicants, they are appealing because this is an issue of substantial public importance and they believe that there are reasonable prospects of an appeal court finding that Shell did not undertake the consultations which its own environmental management programme (EMPr) obliged it to take, that the risks of harm to marine life are real and not speculative, and that there was a reasonable apprehension that the blasting would do irreparable harm if the interim interdict was not granted.

“The court should have issued a rule nisi directing the parties to return to court for a more in-depth hearing, should have granted an interim interim interdict to stop Shell starting the seismic survey before that hearing, and should not have made a punitive costs order when they were acting in the public interest,”  read the statement, which also noted that Shell has indicated that it will oppose the application for leave to appeal.

“The application will be made to Judge Govindjee, who will have to decide if the applicants are given leave to appeal. If the judge grants the applicants leave to appeal, it will most likely be to a full bench of the Eastern Cape High Court. The date for the initial appeal application hearing has not yet been set but is likely to be in early 2022,” the statement said, adding: “The harm that Shell’s seismic survey is likely to cause to marine life and coastal communities was also central to the hearing on Friday, 17 December 2021 before Justice Bloem of the Eastern Cape High Court. Various coastal communities along the Wild Coast and supporting NGOs, had also applied for an urgent interdict to prevent Shell continuing with the seismic blasting which it started on 8 December.”

On Friday, Tembeka Ngcukaitobi SC told the court that the communities were not consulted at all during the preparation and approval of the EMPr and presented substantial expert evidence of the harm that seismic blasting causes.

“The idea that there is another way of resolving this is not borne out of the facts. The only way to resolve this is to come to court and obtain an interdict,” said Ngcukaitobi .

Ngcukaitobi slammed Shell’s inadequate consultation under the MPRDA as “farcical and a complete sham based on exclusion”.

In response to Shell’s argument that the communities should have asked Minerals Minister Gwede Mantashe for help rather than seeking this interdict this urgent relief in court, Ngcukaitobi  said that Mantashe had been “unequivocal” in his stance against the communities: “The regulator is sleeping in the same bed as Shell. Instead of regulating them, he has taken their side.”

Shell’s counsel Adrian Friedman maintained that there is no evidence of harm to marine life and that communities’ objections are “speculative and claims of cultural and spiritual harm merely subjective”.

Shell held firm that the EMPr under the MPRDA constitutes an environmental authorisation under NEMA, arguing that Shell and the exploration company Impact Africa stand to lose hundreds of millions of rands, so a massive prejudice should be taken into account.

“The harm to Shell is nothing short of catastrophic. The litigation against Shell was unreasonable, and the final matter and determination [must] be concluded today, to avoid further litigation,” Friedman said.

Commenting about the case, Wilmien Wicomb, attorney at the Legal Resources Centre, said what they heard from Shell and Mantashe in court on Friday demonstrates how far they still have to go to make the lives of rural communities in South Africa visible.

“Win or lose, I hope this case will change the way multinationals view their duty to engage with affected communities in South Africa,” said Wicomb.

Melissa Groenink,  attorney and programme manager at environmental and human rights organisation Natural Justice, said it is remarkable that Shell can come to court to say that commercial interests in this case trump the cultural rights and spiritual beliefs of the Wild Coast communities, and simply dismiss the evidence of experts about the harm to marine life, ecology and community livelihoods. DM/OBP