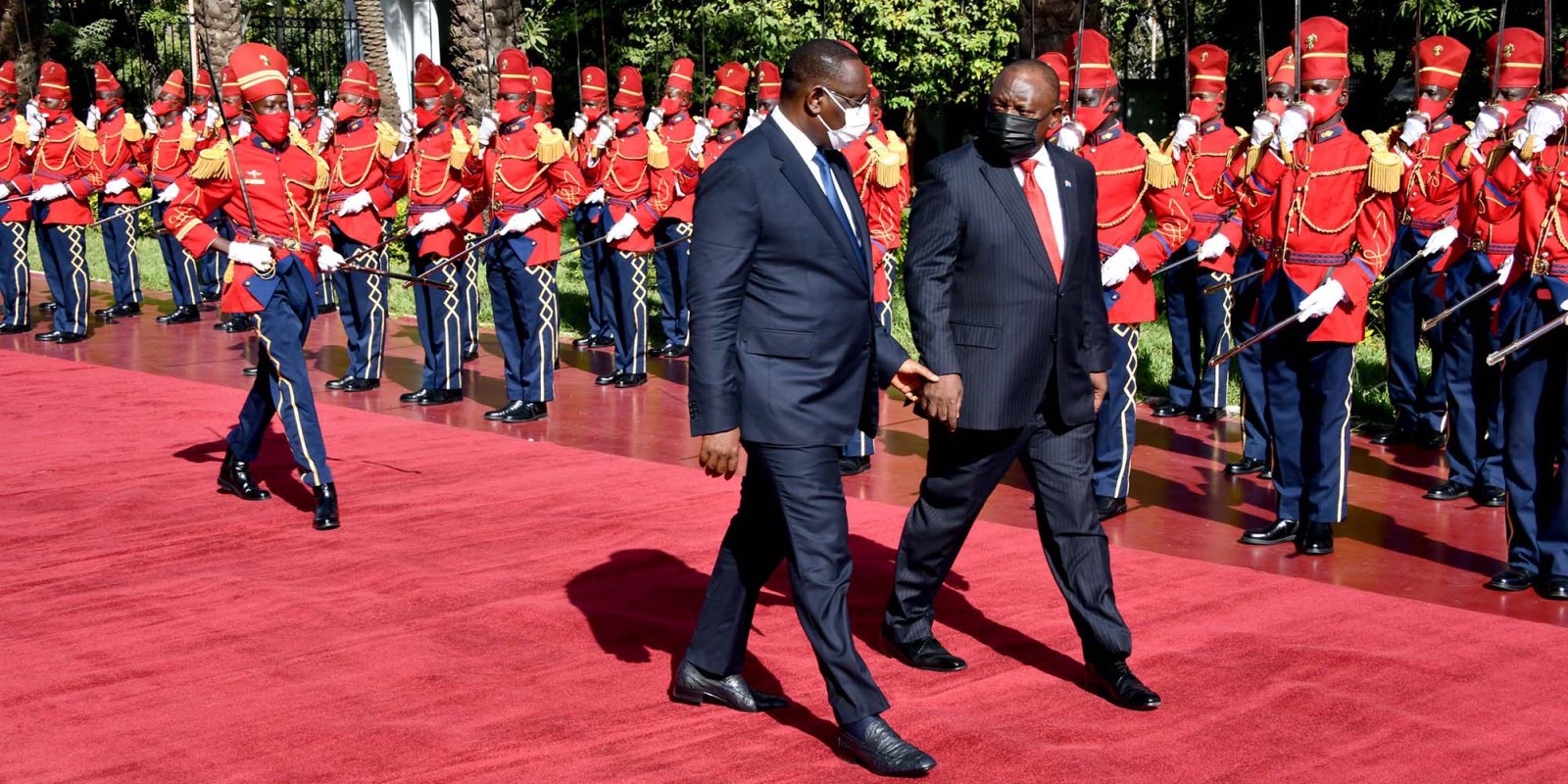 President Ramaphosa and President of Senegal Macky Sall during a state visit on 7 December 2021. (Photo: GCIS)

President Cyril Ramaphosa’s recent state visit to four nations in West Africa was an important step towards recentring South Africa’s economic diplomacy and bolstering trade and investment in the region. During former president Jacob Zuma’s administration, economic diplomacy in Africa faltered and the continent’s interests were mainly advanced through multilateral institutions such as the G20, BRICS and the Forum on China-Africa Cooperation (Focac).

The current administration seems to have a renewed interest in advancing trade and investment under the African Continental Free Trade Area (AfCFTA) and maintaining good relationships with its regional partners. This is an important move that will assist with sustainable economic recovery in each country as the Covid-19 pandemic has battered African economies.

While South Africa’s economic relations between Nigeria and Ghana are very robust and well documented, this is not the same for the Francophone duo of Côte d’Ivoire and Senegal. Both countries recorded impressive economic growth figures before the onset of the Covid-19 pandemic, as Côte d’Ivoire averaged a 5.9% growth rate during the 2016-2020 timeframe. Despite the growth rate falling to 2% in 2020, the Ivorian economy is already experiencing a rebound, with the government projecting growth at 7.65% from 2021-2025.

Meanwhile, from 2014 to 2019, Senegal recorded an annual average growth rate of 5% before plummeting to 1.5% in 2020 as a result of the pandemic. Senegal is also set for a quick recovery, with growth estimated at 5% in 2021, and 5.5% in 2022. In 2023, the figure is set to reach 10%, according to the International Monetary Fund, when production commences at the $4.2-billion Sangomar offshore oil joint venture and $10-billion Grande Tortue Ahyemim offshore gas project.

Despite the positive growth trajectory experienced by Côte d’Ivoire and Senegal, South African economic diplomacy efforts have been largely absent in these countries, which has led to a limited South African commercial presence there. France, by virtue of colonial ties and its status as the most important international power in Francophone African states, has historically been the most prominent bilateral trade and investment partner in these two countries. Over 700 French companies operate in Côte d’Ivoire, with a French consortium led by Bouygues currently building the $1.6-billion Abidjan Metro and Bolloré operating the Abidjan Port.

In Senegal, where an estimated 250 French businesses are based, another French consortium, spearheaded by Eiffage, is constructing the $1.3-billion Transport Express Régional, Senegal’s first high-speed rail network.

Nevertheless, over the past 10-15 years, new economic partners such as China, India, Morocco, Turkey, Qatar and the United Arab Emirates have strengthened economic cooperation with these two countries. Senegal’s ultra-modern Blaise Diagne International Airport was built by Turkey-based Summa, while the same firm is constructing the 50,000 seat Olympic Stadium.

South Africa seems committed to not missing out on further business opportunities in these two markets, as Ramaphosa signed nine cooperation agreements with his Ivorian counterpart, Alassane Ouattara, and an additional four with Senegalese President Macky Sall during his visit. The agreements were signed in the domains of agriculture, energy, fisheries, health, hydrocarbons, information technology and mining, among others.

Despite the intention by both states to diversify their energy mix, the exploitation of hydrocarbon reserves is still a priority for the governments of both countries and could present further opportunities for South African companies involved in these domains.

In September 2021, Italian energy giant ENI made a discovery of 1.5 billion to two billion barrels of crude oil and 1,800 to 2,400 billion cubic feet of associated natural gas in the CI-101 offshore block of the Whale deposit in Côte d’Ivoire. This was the country’s first major oil discovery since 2001 and the government has already expressed its desire to carry out further explorations in this area.

Côte d’Ivoire is currently a very modest petroleum producer, with an average output of 36,000b/pd. Further investment could help to increase this. Senegal, as mentioned earlier, has two mega hydrocarbon initiatives –  the Sangomar offshore oil joint venture and $10-billion Grande Tortue Ahyemim offshore gas project. Both endeavours are set to enter production in 2023, with Senegal initially set to produce 100,000b/pd.

Côte d’Ivoire, which is the world’s largest producer of cocoa as well as the third largest producer of cashew nuts, has already initiated investment programmes which will increase local transformation of these products. President Ouattara has also encouraged investors to support the development of commercial agriculture crops such as cotton, rubber and sugar. In addition, promoting the local transformation of fruits, groundnuts and livestock products, fishing and rice production have also been earmarked for investment promotion by the Senegalese government.

Another area which might be of interest to potential South African investors is the pharmaceutical industry. The onset of Covid-19 occasioned the disruption of medical supply access due to border closures and also saw the practice of vaccine nationalism, which has seen Western nations limit vaccines to countries in the Global South.

In this regard, presidents Sall and Ouattara have taken preliminary steps towards bolstering their local pharmaceutical industries. Sall reaffirmed this wish at the 2021 Focac, when he declared that ensuring healthcare access through the production of drugs and vaccines should be the number one priority of China-Africa relations over the ensuing year. In this regard, Senegal announced at Focac that it would start vaccine production in 2022. South Africa’s world-class pharmaceutical industry could certainly play a role in this dynamic.

The digital economy is still fairly underdeveloped across Francophone Africa. In June, Senegal inaugurated its first data centre, which cost $78.9-million and will be run by Chinese firm Huawei.

While telecoms giant MTN built a data centre in the Ivorian economic capital of Abidjan in 2014, the decision in October by US-based Raxio Group and French investment firm Meridiam to invest $50-million to establish another data centre in Abidjan demonstrates there’s a further window of opportunity for South African firms to exploit in these economies.

President Ramaphosa’s economic diplomacy initiative in these markets is positive and will benefit all countries, especially with accelerating economic recovery. While this visit was primarily meant to create new opportunities, consolidate existing markets and improve the ease of doing business for South African companies, it will inadvertently accelerate the application of AfCFTA.

This is crucial given that intra-African trade is key to unlocking industrial opportunities of many African countries, including South Africa. DM

Mbulle-Nziege Leonard is a doctoral candidate in political studies at the University of Cape Town.

Itumeleng Mokoena is an economist at Trade and Industrial Policy Strategies (TIPS).