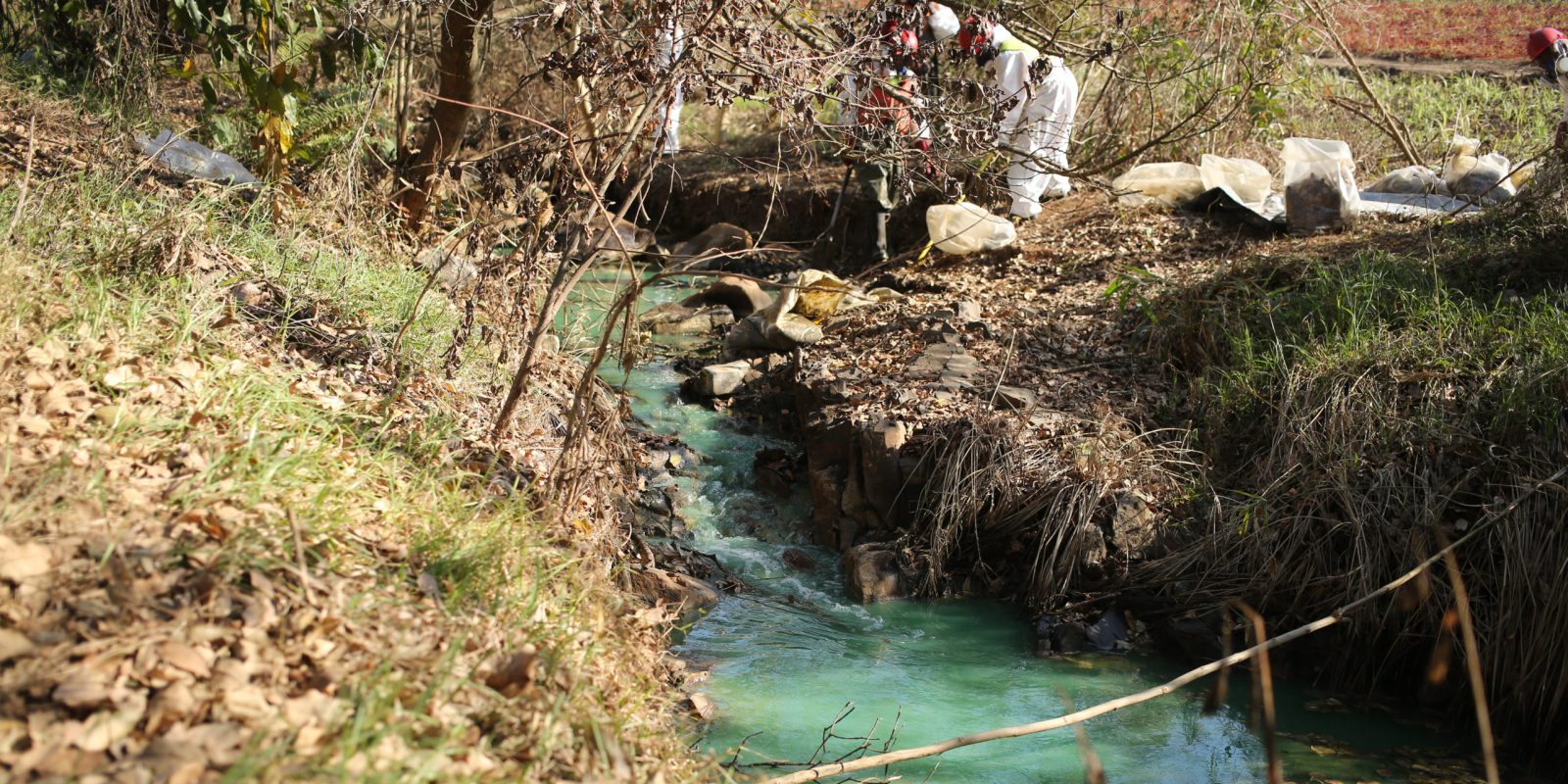 Thousands of kilograms of blue dye leaked out of the UPL warehouse on 13 July, turning the Ohlanga river and its tributaries a luminous blue. A month later, clean-up crews in hazmat suits were still trying to remove the chemicals. (Photo: Mlungisi Mbele)

Barely a month after several Durban beaches were re-opened to tourists and locals, the UPL farm chemicals giant is hoping to dump even more poisonous pesticides into the sea – in an apparent bid to save money on land-based disposal costs.

Several of the city’s most popular swimming beaches were closed for nearly four months as a safety precaution after a torrent of pesticides and other agro-chemicals poured into the sea in the wake of the July arson attack on the UPL chemicals warehouse in Cornubia, north of Durban.

The beach ban was finally lifted on November 2 – but now UPL has asked for permission to dump large quantities of accumulated toxic waste into the sea off Durban, via the Southern wastewater treatment works near Merebank.

The new UPL toxic waste stockpile – scraped from the charred remains of the warehouse floor and surrounding roads, riverbeds and sugar cane fields – has been stored for the last few months in a temporary “pollution control dam” close to the warehouse.

From here, the contaminated liquids have been loaded into road tankers and driven to two specially-designed hazardous waste dumps in Gauteng and KwaDukuza.

But, according to a letter by a specialist environmental consultant acting for UPL, trucking the waste 650km to the Holfentein waste dump in Gauteng and to the closer KwaDukuza dump site was turning out to be  “extremely expensive” and was also reducing the “absorptive capacity” of the two registered dump sites.

With the current summer rains, the pollution control dam was in danger of overflowing into the Ohlanga River catchment as it was “almost impossible” to drain the polluted dam quickly enough. There was also a risk that the hastily built dam could contaminate groundwater and there was a need to consider other alternative local disposal options.

In separate letters, UPL’s Durban attorney Norman Brauteseth has also written to both the Ethekwini Municipality and senior provincial government officials asking for their support and approval to dump the stockpile of several thousands of litres of toxic waste at sea.

Reports seen by Our Burning Planet show that the dam and surrounding polluted land contains a cocktail of poisons that include heavy metals such as arsenic and copper, along with pesticides such as atrazine, terbuthylazine, metolachlor, atrazine, triclopyr and 2,4-D.

In one of the letters, Brauteseth says he believed his clients had presented “a very strong case” for the city to dump the chemicals at sea, adding that the application was accompanied with “a letter of verification and support” from the Council for Scientific and Industrial Research (CSIR).

However, this “letter of support” is heavily qualified, and the two CSIR scientists who signed it make the point that it is not possible to estimate the potential impact on the marine environment from toxic pesticides if the UPL dumping plan is approved.

Based strictly on the sample results provided by UPL, and the specified permit conditions for Ethekwini to dump sewage and chemical waste at sea, it appeared that discharging the UPL waste “meets conditions of acceptability for disposal to sea via the Southern Wastewater Treatment Works outfall”.

But, putting some distance between themselves and this suggestion, they state: “However, scientists from the CSIR do not make decisions on acceptability for discharge and notwithstanding this conclusion this responsibility remains vested with the eThekwini Municipality”.

Significantly, the permit conditions which allows Ethekwini to dump sewage and industrial effluents off the coast of Durban are based on a very limited range of chemical pollutants designed for local industries south of Durban – not for an abnormal, once-off dumping plan of massive volumes of highly-toxic pesticides and chemicals following an unprecedented spillage by UPL.

Francine Hattingh, a Durban North resident and member of a civil society stakeholder group set up to monitor the aftermath of the UPL chemical disaster, told Our Burning Planet she was worried about the possible impacts of dumping more toxic waste into the sea.

Hattingh – a member of the UPL Cornubia Fire Civil Society Action Group and the Multi-Stakeholder Forum established by national Environment Minister Barbara Creecy – said she was concerned that Durban residents and other groups should be fully informed about the latest UPL proposal.

Hattingh noted that the plan to dump UPL’s waste residue at sea only came to light through informal channels over the last few days and was not reflected at all in the full-page UPL advertisements and door-to-door pamphlets distributed by the chemicals company.

“This information should have been disseminated transparently and widely to the Durban community, yet UPL appears to pushing a particular narrative in its pamphlets.”

Desmond D’Sa, another community activist who sits on the Multistakeholder Forum that has been largely spurned by UPL, was more direct:

“We cannot use the ocean as our waste repository due to our failures. Every wastewater works is discharging waste to the ocean. The carrying capacity of the ocean has been breached and is affecting marine ecology.”

Despite assurances that toxic waste would be diluted at sea, at least 3.9 tonnes of dead fish had been collected in the immediate aftermath of the UPL spill.

D’Sa said the plan to dispose of the remaining toxic residue into the Indian Ocean “smacks of a recurrent north/south duality where the north benefits from pristine environments and the south benefits from its issues and waste burden . . . They must come up with other options in managing the waste and it should not have been generated in the first place.”

Just after mid-day on 15 December UPL was asked to comment on suggestions that it was pursuing the cheapest option to get rid of the waste.

Initially, company spokesperson Japhet Ncube did not respond directly to the question, by stating that: “UPL disposes of contaminated surface water strictly in accordance with licences and authorisations from the relevant national departments.

“In the light of improvements to the quality of water collected in the pollution control dam, UPL’s specialists have been investigating with the eThekwini Municipality and the other authorities the option of disposing of some or all of that water into the municipal sewer system and/or to the municipality’s southern works sea outfall.

“Those discussions are well documented. Detailed independent analysis has taken place of the Municipality’s disposal standards and whether the Pollution Control Dam water conforms to them. The overriding consideration has been whether those requirements would be met, and disposal would only have taken place if considered compliant and safe by the relevant experts and authorities and if the requisite approvals were in place.

“Those discussions have not been concluded and at this stage there is no approval for, and no intention by UPL to dispose of the contents of the dam in this manner.”

Half an hour later, the company’s crisis communications team upped the ante somewhat and threatened to sue Daily Maverick :

“Also UPL also wants to raise its concern about the heading of your enquiry – suggesting that UPL wants to “dump” its “poison” at sea, which in light of the response below is clearly not only factually incorrect but in their opinion is also actionably defamatory.

“All UPL has been doing is seeking to lawfully dispose of contaminated water, and the sewer system and sea outfall are designed and used for precisely that purpose. There is clearly nothing unlawful or improper for UPL to explore a lawful disposal mechanism, and any statement or innuendo to that effect will have consequences.” DM/OBP