Zombies, cannibals and killing off the poor: KZN battles a deluge of vaccine misinformation 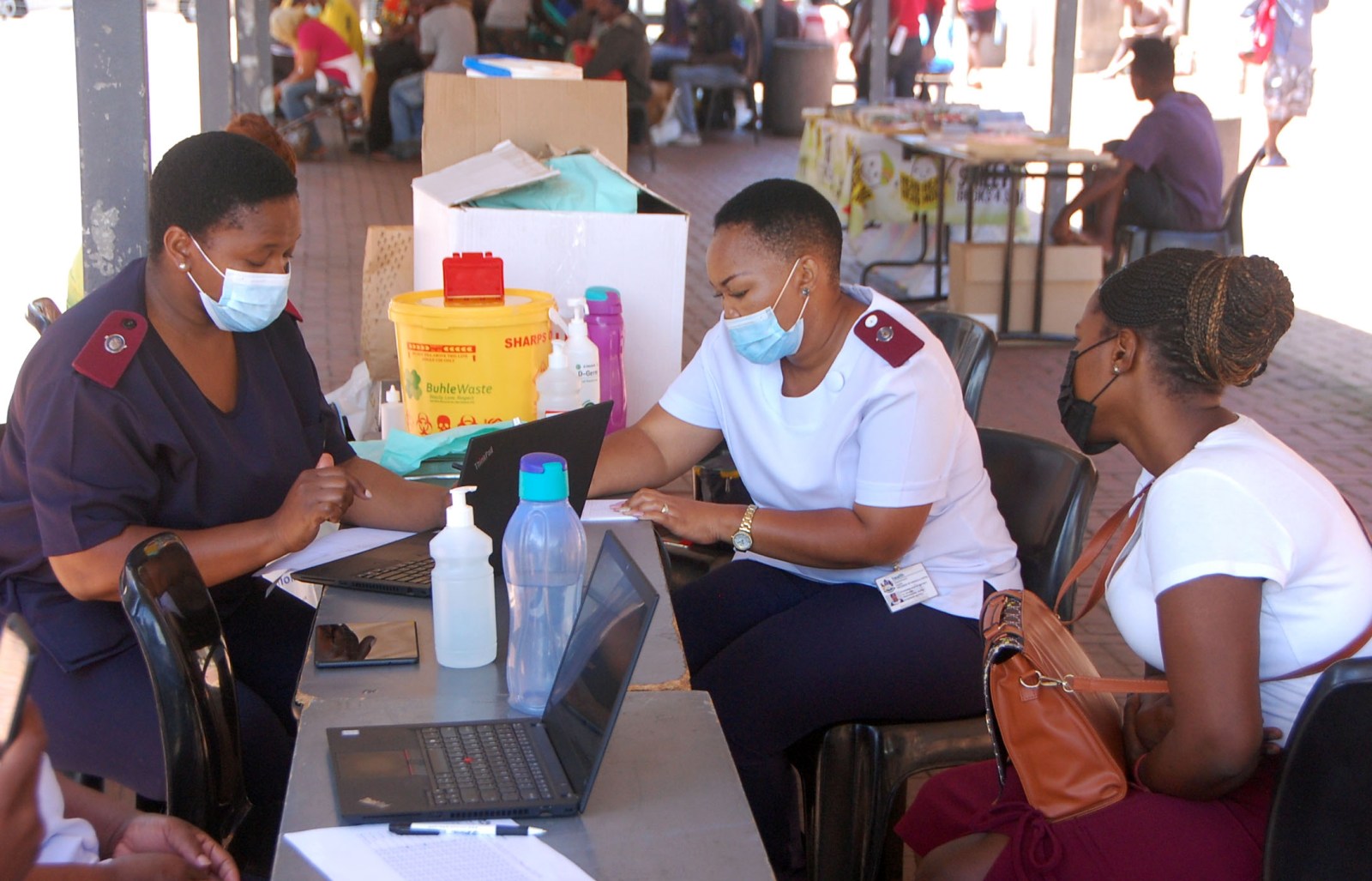 A trickle of people line up outside the Dennis Hurley Centre in the Durban CBD to be vaccinated against Covid-19. (Photo: Phumlani Thabethe)

Health officials, NGOs and other stakeholders in the vaccination roll-out have their work cut out getting communities in KwaZulu-Natal vaccinated amid fears, hesitancy, poor communication and superstitious misinformation, as a Daily Maverick team found out during a recent visit.

Officials in KwaZulu-Natal are worried about the slow vaccination uptake in the province as the country battles a fourth wave of Covid-19, particularly in townships and rural areas, in contrast with white, Indian and coloured communities, according to KZN health MEC Nomagugu Simelane-Zulu.

Only 25% of South Africa’s population has been fully vaccinated since phase one of the inoculation campaign began on 17 February 2021, during which health workers received the Johnson & Johnson jab. By 22 November 2021, close to 24.75 million vaccine doses had been given countrywide.

The programme had a rough start as health authorities said the Beta variant (B.1.351 or 501Y.V2) was resistant to the AstraZeneca/Oxford shot.

Gauteng has the highest number of fully vaccinated citizens (6.69 million), followed by the Western Cape (4.05 million) and KZN (3.8 million).

Gauteng is the most populous province (about 15 million), and KZN the second-most (an estimated 11.3 million, or 19.2% of the country’s total).

The vaccine uptake is highest in southern KZN — areas such as Port Shepstone, Harding and Kokstad — and lowest in the far north region of Umkhanyakude, including the towns of Jozini, Manguzi and Mtubatuba.

Vaxing the undocumented and the homeless

At the Denis Hurley Centre in Durban’s CBD, where undocumented South Africans and foreigners can get their jabs, many of those in line were reluctant to be interviewed, perhaps feeling it was an intrusion or could put them at risk.

A 34-year-old Democratic Republic of the Congo man said he had come all the way from Eshowe on the north coast where he works as a barber, because he had tried other vaccination centres where he was told he had to produce a South African ID or a passport.

“I felt that I had to vaccinate because I meet a lot of customers who don’t use masks when they come to cut or trim their hair. I have issues with my documents at the moment. But I said I must vaccinate while I wait for these documents to be sorted out,” he said.

Sanele Mhlongo, a 23-year-old retail store worker who lives in the informal settlement across the road from the clinic, said he had not been vaccinated and didn’t see the need to.

“I will only vaccinate if they say at work that vaccinating is mandatory. Personally, I don’t see the point of vaccinating because I know of so many people who die despite vaccinating. I went to a funeral of one 72-year-old woman who died just after getting vaccinated. I believe that Covid-19 exists but some of the government messaging around it is unbelievable.”

Albertina Hadebe (58) told us she had her second Pfizer jab after the government’s call for more people to be vaccinated.

“Many people in my neighbourhood don’t want to vaccinate. They say they doubt the efficacy of the vaccines, they say they are scared of dying after vaccinating, others say so many other things for reasons they are not vaccinating,” she said.

In the Nsimbini area of Mbumbulu, a semi-rural area about 30km south of Durban, three community health workers explained the difficulty of getting people to the local Nsimbini Clinic to be vaccinated.

Earlier in 2021, “we were tasked with going out to homes in the community to get the over-60 population — mkhulus and the gogos — to come and vaccinate,” said one of the health workers, who did not want to be named because they were not allowed to speak to the media.

Disinformation also included that the aim of the vaccines was to decrease the world’s poor population, especially in Africa, that they alter DNA in the nucleus or turn you into a zombie.

Her colleague agreed: “Some people in the community have been vaccinated and nothing has happened to them. But still, attitudes have not changed much. You still get people spreading false information about the vaccine. Some of the young people who had been hesitant to take vaccines are starting to come to the clinic to vaccinate. They say they are compelled to do so in their workplaces or they will lose their jobs.”

Mbusi Ngwane (23) and Sboniso Maphumulo (22) said they are proudly unvaccinated.

“I believe that the current vaccination effort is a trial and they (the scientists) want to find out how vaccination affects people. I will not participate in a human vaccination trial. I will not vaccinate until I am sure that once you are vaccinated you don’t get Covid-19. At the moment, vaccinating doesn’t make sense to me. It is like saying use a condom but you could still get HIV and STI even if you are using condom,” said Ngwane

In Clermont, a bustling township about 24km west of Durban, several people were queueing for the jab at a clinic. A senior nurse said that, on average, they vaccinated about 48 people daily. She was pleading with people who were in the clinic for other reasons, to consider vaccinating.

Outside, Noluthando Phathela (36) and Manaka Mnguni (40) were hawking fruit, sweets, cakes, biscuits, chips and other items. Phathela said she had her first Pfizer jab in August and the second in October. “I decided to do it because I meet a lot of people here. I saw many people were getting vaccinated and nothing was happening to them, going about their life normally, so I said, ‘heck, let me do it, too’.”

‘I cannot afford to travel to vaccinate’

Thami Bhengu, a 36-year-old unemployed man from KwaNyuswa, a peri-urban area about 41km west of Durban, said he had not been vaccinated because the closest vaccination site was about 6km away, at the Valley Trust clinic.

“I have to pay R20 to and come back from the clinic. Where will I get this money? As you can see I am unemployed. They (the government) should bring vaccination closer to us, close to the communities,” he said.

Mbusi Ngwane, (23), from the Gulube area in Mid Illovo, a rural area about 83km southwest of Durban, said he would only vaccinate if he was looking for work or was not allowed into places without a vaccination certificate.

David Harrison, CEO of the DG Murray Trust who leads a cross-sectoral demand acceleration strategy mandated by the National Department of Health in support of the national vaccination effort, said more than 23 million adult people are yet to be vaccinated in South Africa.

The slow uptake was evident in townships and rural areas countrywide, but was magnified in KZN: “When the vaccination programme started, KZN began at the same time like other provinces, but in KZN it stagnated. This could be linked to people using the programme, especially refusing to vaccinate, as some form of protest against authority.

“Some people, especially in poor areas, see Covid-19 as one of the threats to life like crime, HIV, poverty, compared with people who live in suburban areas who see Covid-19 as the main threat to their lives and therefore they are vaccinating in numbers. So there are many more people who are angry and hungry, who are saying they want jobs before jabs.”

“They should consider buying airtime or other things for people coming forward to vaccinate.” The R200 Vooma vaccination voucher aimed at over-50s was becoming increasingly popular.

“The MEC and KZN department of health officials are working with councillors, with traditional leaders like amakhosi and izinduna, with celebrities and other stakeholders, to take the vaccination campaign to township and rural areas. The message is that ‘we must all speak with one voice and counter the myths spread in our communities about vaccination’. The MEC has been saying we have to turn this tide and pick up vaccination figures in KZN.” DM