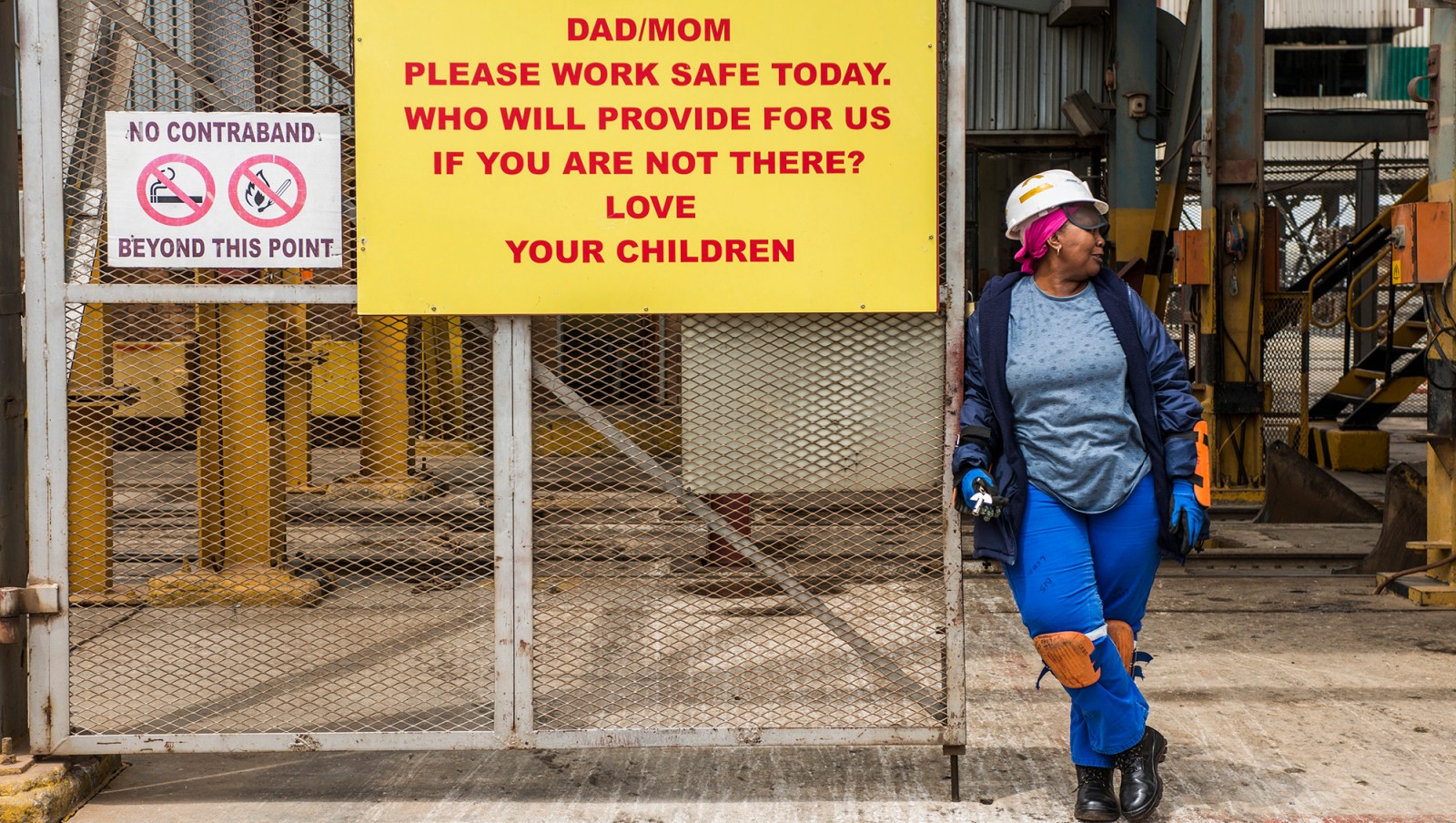 A mineworker stands beside a safety sign at the entrance to a shaft. (Photo: Waldo Swiegers / Bloomberg via Getty Images)

After years of progress, what is going wrong? The stakes could hardly be higher — we are talking about human lives here, not simply statistics.

South Africa’s mining sector has agreed to the immediate implementation of eight measures to stem the rising tide of work-related deaths on the mines, the Minerals Council South Africa said on Monday.

The initiative comes against the backdrop of a worrying setback in mine safety, reversing a long-term trend of improvement.

“By 13 December this year, 72 people have died on South Africa’s mines compared to 52 in the same period last year. This is the second consecutive year of regression in safety. In 2020, the industry recorded 60 fatalities compared to 51 the previous year, which was the industry’s lowest number of fatalities,” said the Minerals Council, the main industry body.

The Minerals Council board, comprised of 29 mining CEOs, held an emergency meeting on Friday to agree to the measures.

Some of these measures, it must be said, are clearly sensible and don’t look difficult to introduce, such as implementing fatigue breaks.

But, “Stopping unauthorised and uncontrolled access to old mining areas that are not routinely mined” may be more difficult to implement.

Some mining deaths have occurred because miners on the job have entered such areas, which are typically barricaded, and suddenly clamping down on the practice will not be easy, as presumably it has long been prohibited.

This is also often the work of illegal miners or “zama zamas”, and between the industry on one hand and a dysfunctional and corrupt police force on the other, there has been little in the way of success on this front. Like “Zero Harm”, “Zero Zama” campaigns have yet to reach that goal. Unions maintain that the zama zama problem has been exacerbated by retrenchments over the years.

The measure to “ensure that incentives and bonuses for miners do not compromise their rights to stop or refuse unsafe work” is also one that has been in place for years. All miners have the right to refuse to undertake work or enter an area if they feel it is potentially dangerous. But unions say that many workers remain fearful that they can be fired for exercising this right.

It must be said that in general the mining sector’s health and safety record has improved dramatically over the past couple of decades.

From well above 200 deaths in 2007, the industry witnessed a steady decline in fatalities from work-related accidents, to 73 in 2016. The number jumped to 90 in 2017, but resumed its downward trajectory to the record low of 51 in 2019 — which on average was still almost one fatality a week. Many factors have been behind the improvement, notably mechanisation, the roll-out of netting to prevent rockfalls and a concerted drive to foster a culture of safety.

Much of this has been investor-driven as environmental, social and governance issues have risen to prominence. The mining industry is ever-mindful of legal and regulatory consequences at the end of the tunnel if it does not clean up its act.

This makes the setbacks all the more alarming. After years of progress, what is going wrong? The stakes could hardly be higher: we are talking about human lives here, not simply statistics.

“It’s a dark, dark year-end period for everyone in the industry,” said Nolitha Fakude, president of the Minerals Council. DM/BM