Optimum Coal: NPA’s Hermione Cronje wants curator to step in to protect ‘interest of the State’

The NPA has leveled highly damaging claims against the business rescue practitioners of the Gupta-owned Optimum Coal who, it says, are hell-bent on pushing through a sale that will cause them to commit a money laundering offence under the Prevention of Organised Crime Act.

The National Prosecuting Authority wants a curator to oversee the business rescue practitioners (BRP) of the Gupta family’s Optimum Coal assets so a proper assessment into the state and value thereof can be done.

It says it is “concerned” about the conduct of a group of rescue practitioners responsible for Optimum Coal Mine (OCM) and Optimum Coal Terminal (OCT).

And, the assets need to be protected ahead of applications to forfeit both to the State as the proceeds of crime.

The two companies have been in business rescue since 2018 and a March 2022 deadline looms for final implementation of a rescue plan.

Under that plan, Optimum is being sold to international businessman Daniel McGowan’s Liberty Coal through a debt-to-equity deal.

Hermione Cronje, outgoing head of the NPA’s Investigating Directorate, filed affidavits for applications to preserve the Gupta family’s shareholding in Optimum and another, the creditor claim relied upon for the sale to Liberty this week.

In those she says the State is concerned with among other things:

*The BRPs’ relationship with the Dubai-based McGowan;

*An alleged “unduly pessimistic” take on the value of Optimum Coal Mine that appears to disregard the company’s most valuable asset, Optimum’s coal resource that sits on some 338 square kilometres in Mpumalanga and with that, rocketing coal prices that have trebled since May 2020; and

*Their refusal to consent to the NPA’s legal action despite having been presented with clear evidence that the creditor claim paving the way for the sale emanates from the proceeds of crime.

Under the rescue plan, ownership of the Gupta-owned assets will move to Liberty Coal. The company already has regulatory approval and a Section 11 mining permit.

But the deal is now in jeopardy as the State argues that the creditor claim against Optimum that gave rise to the sale is in fact the proceeds of crime and the instrumentality of money laundering under the Prevention of Organised Crime Act (Poca).

In a nutshell, Liberty is owned by Templar Capital, a Bermuda-registered company that acquired the R1,3-billion claim in OCM last year. This was done through a cession of the claim by another Bermuda company, Centaur Ventures Limited (CVL).

CVL is noteworthy because in 2016, Griffin Line, a Dubai company controlled by Ajay Gupta’s son, Kamal Singala, gave it a $100 million loan that was then channelled to SA to help fund the purchase of Optimum Coal.

At the time McGowan, through a different company, co-owned CVL with Akash Garg. Garg is the Gupta son in-law whose 2013 wedding at Sun City came under intense scrutiny when an aircraft ferrying guests from India was irregularly permitted to land at the Waterkloof Air Force base.

The State says the money the Guptas ostensibly loaned CVL was the proceeds of crime – cash allegedly raked in from tainted deals at Eskom, Transnet and the Transnet Second Defined Benefit Fund.

It is also cash that McGowan – in unrelated legal proceedings abroad – has said was “money stolen from the South African government and laundered via Mr Singhala on behalf of his father and wider family members”, Cronje states in an affidavit filed.

As a result, the BRPs will fall foul of the law if they proceed with the sale. (see pullout below). 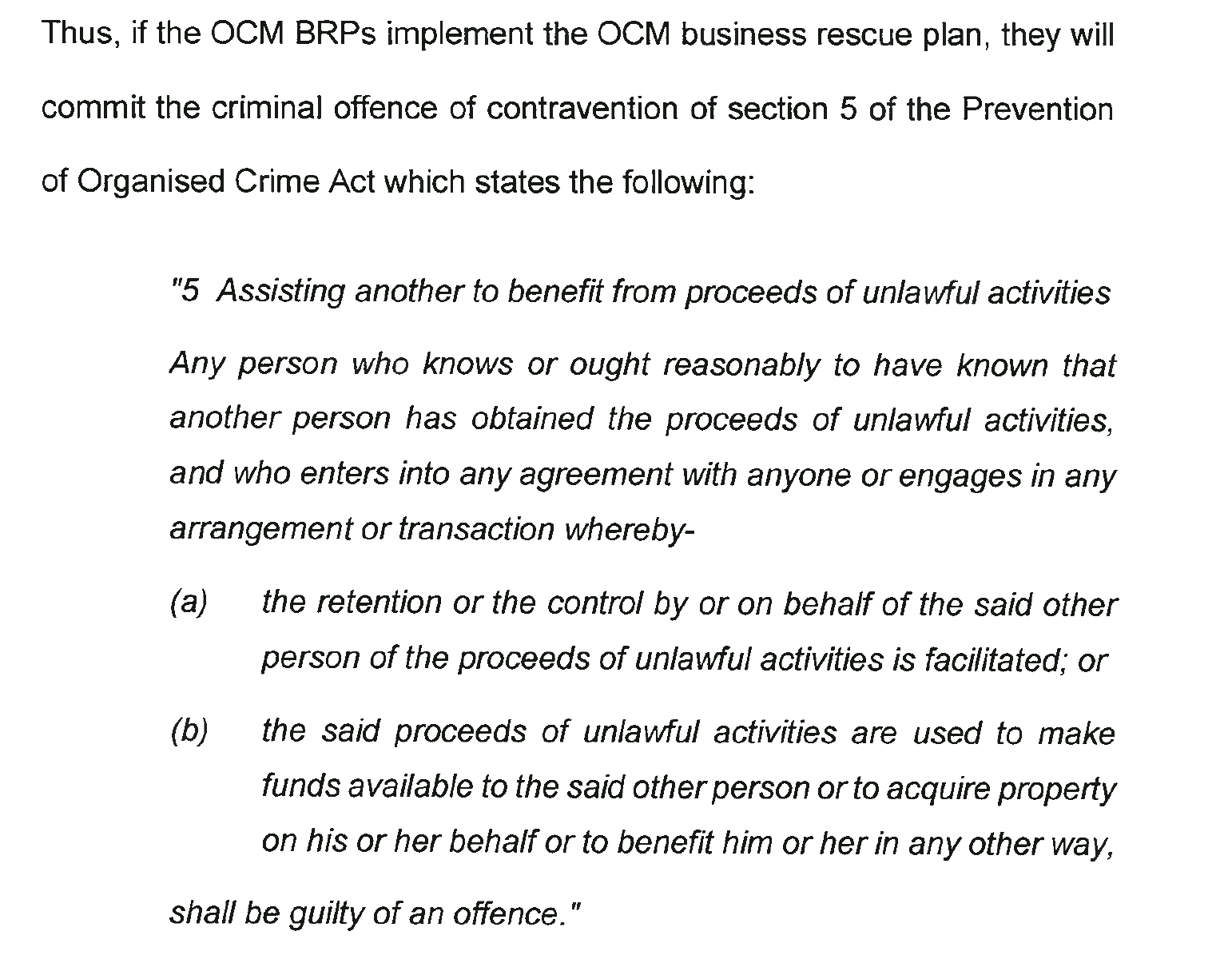 In their “enthusiasm” to pull off this deal they seem “indifferent” to the fact that they’d be committing an offence under Poca.

This is despite them having been presented with “clear” evidence that the creditor claim relied upon for the deal was the proceeds of crime, Cronje says. The BRPs, she says, are “indifferent” to the criminal nature of the course of conduct they are pursuing.

McGowan maintains that Templar’s claim against Optimum was based on prepayments made for coal.

But Cronje says the BRPs have known since at least February 2019 that the claims were not based on authentic coal contracts.

Rather, she says, they were devices to help the Guptas launder cash.

On 26 November 2021, the NPA gave the BRPs of OCM and OCT a copy of a draft affidavit of Sibusiso Tshikovhi, a financial investigator assigned to the ID “so they could see the evidence” that the CVL/Templar claim was based on the proceeds of crime.

The State urged the BRPs to have due regard for their duties as officers of the court in their take on its preservation applications.

It also asked their consent to launch the current litigation under section 133 of the Companies Act – and this was refused by the teams of BRPs responsible for OCM, OCT and Tegeta (the company through which the Guptas own Optimum). (See pullout below). 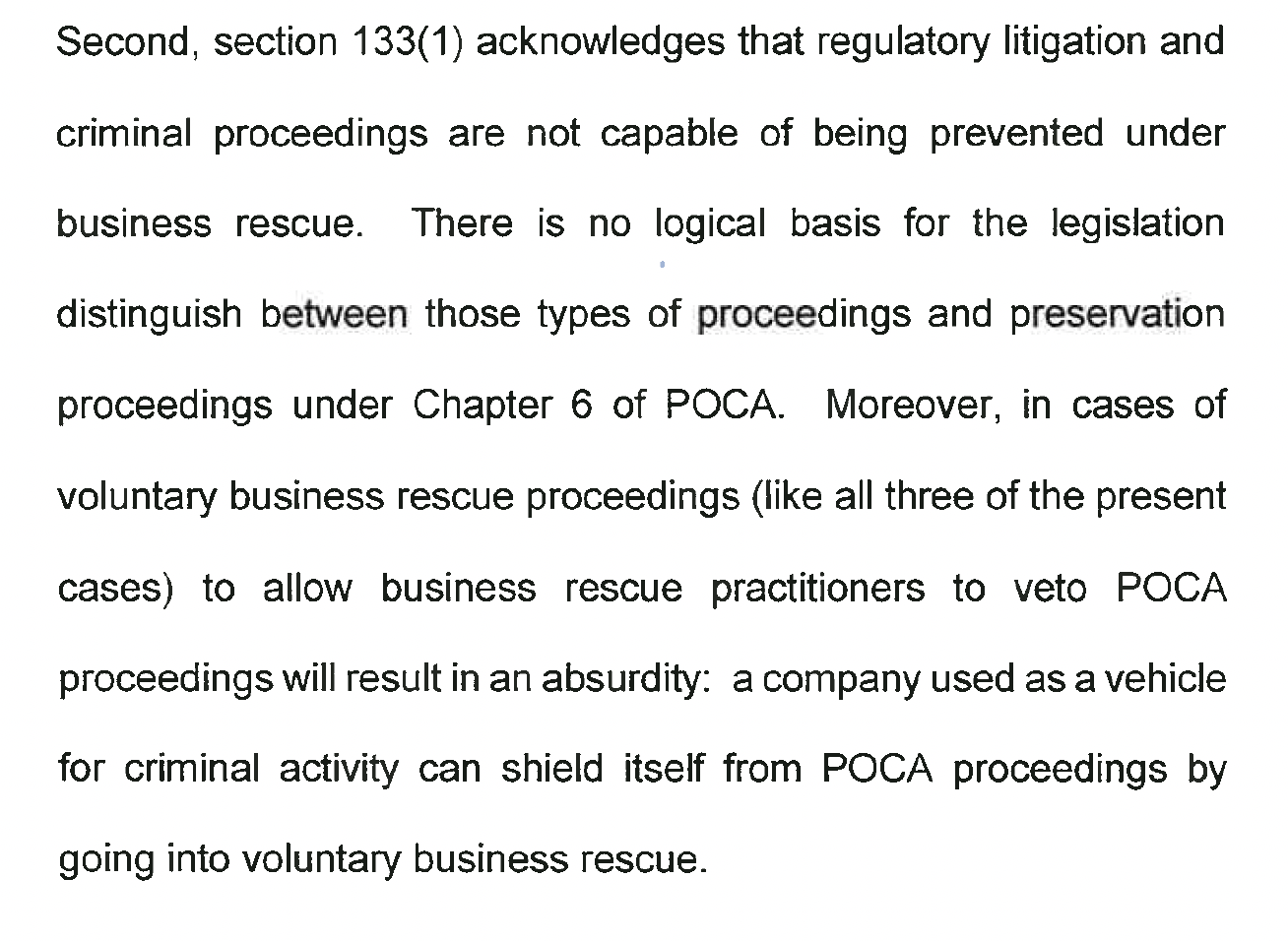 Cronje says the law permits the court to appoint a curator bonis to take control of property under a preservation order.

The NPA’s proposed draft order is intended to place a curator in control of the affected property but to allow the BRPs full power to run the business.

But, they would require the written consent of the curator for any transactions above R50,000 if the NPA succeeds with its application.

The tension between the NPA and the BRPs is concerning for a number of reasons – fundamentally because the rescue practitioners are responsible for most of the Gupta companies currently in business rescue.

While the BRPs seemingly allowed the NPA to move restraint proceedings against a different Gupta company – Islandsite Investments 180 – earlier this year, it is unclear how this, rather personal battle, is likely to impact on that case.

The Islandsite restraint is linked to an R24,9-million criminal case in the Free State that has produced the first batch of arrest warrants for members of the Gupta family.

What exactly is Optimum’s worth

Cronje says there is reason to believe the BRPs of OCM and OCT are taking an “unduly pessimistic” approach to the value of the OCM shares, the business of OCM and the shares of OCT.

The BRPs maintain the OCM shares are of no value because creditor claims exceed the value of its assets.

For this reason, the business rescue plan provides for the sale of the business to for just R1, court papers state.

Cronje says in May 2020 the assets of OCM were valued at R770 million against R4-billion in creditor claims with R1,3bn being that of McGowan’s Templar claim.

Another R436-million in claims were from Gupta entities (also likely also the proceeds of crime, or else the instrumentality of the offence of money laundering) that the BRPs “inexplicably” fail to note as related party claims, she said.

But that evaluation did not include the value of OCM’s coal resource – in other words, Optimum’s single most valuable asset was excluded from the valuation.

Optimum is a coalmine of 338 square kilometres in surface area with export prices (in USD) having rocketed since the valuation last May, court papers state.

OCM and OCT were among eight Gupta companies placed into voluntary business rescue in 2018. This was after South Africa’s major banks pulled the plug on Gupta accounts.

Some are heading into year four of business rescue and the BRPs have been in and out of court, as they have had to battle the Guptas and their local proxies for control of the companies.

In some cases the fights have gone all the way to the Constitutional Court.

*Daily Maverick has approached the BRPs via their attorney for comment and will reflect on their position in due course. DM