A major battle looms as the NPA goes to court to preserve Optimum Coal Mine and Optimum Coal Terminal, the Guptas’ most prized package of assets in South Africa. It also seeks to block a debt-to-equity takeover by Daniel McGowan, one of the family’s former business associates, who is now on the verge of snapping it up for a symbolic R1.

The Investigating Directorate (ID) of the National Prosecuting Authority filed two High Court applications for preservation orders under the Prevention of Organised Crime Act this week.

One seeks to grab the Gupta family’s shares in Optimum Coal Mine and Optimum Coal Terminal, following their controversial acquisition – allegedly funded with the proceeds of State Capture crimes – just over five years ago.

The State contends that cash from Transnet, the Transnet Second Defined Benefit Fund and Eskom was mobilised and channelled through, among others, Albatime, Trillian Capital Partners and Centaur Mining to help the Guptas pay for the 2016 purchase.

The second is a parallel application to preserve a R1.3-billion creditor claim held by Templar Capital, a Bermuda company through which Daniel McGowan – a former Gupta business associate – now stands to acquire the business of Optimum.

Affidavits filed by Hermione Cronje, the outgoing head of the ID, set out details of the State’s double legal bid in anticipation of forfeiture applications likely to follow in the coming months.

Both applications are premised on the State’s contention that the deals – the original Gupta acquisition of the Optimum package and the latest being driven through business rescue proceedings – are tainted by the proceeds of crime.

The Optimum deal was signed in December 2015 amid a national storm around the firing of former finance minister Nhlanhla Nene and subsequent reports of former mining minister Mosebenzi Zwane’s trips to Zurich, allegedly to help seal the deal for the Guptas.

The Guptas hurriedly left South Africa several years ago and law enforcement is awaiting a decision on its application for Interpol Red Notices for four members of the family. Brothers Ajay, Atul and Rajesh as well as their former kingpin, Salim Essa, are also the subject of financial sanctions imposed by the United States in 2019.

With this case the NPA seeks to have forfeited to the State the proceeds of one of the “primary criminal schemes” identified in former public protector Thuli Madonsela’s 2016 State of Capture report, Cronje says.

Indications are that this will be one big fat clash. Three sets of business rescue practitioners (BRPs) – those of Optimum Coal Mine (OCM), Optimum Coal Terminal (OCT) and the BRPs responsible for Tegeta Exploration and Resources – have refused to grant the NPA section 133 consent for the applications filed at the High Court in Johannesburg on December 8 2021.

(This section of the Companies Act dictates the limits within which legal proceedings may be brought against companies in business rescue).

Cronje, in court papers, said this was unfortunate but hoped that the BRPs would come round.

She warned that some of them may be guilty of an offence under the Prevention of Organised Crime Act (POCA) should they proceed with implementation of the OCM rescue plan and thereby give effect to the debt-to-equity deal.

The NPA requires the court’s leave to proceed with the applications filed.

While concerned about the dissipation of assets, Cronje says the immediate risk has been mitigated by an undertaking from the BRPs to give the State notice of circumstances that may lead to the imminent implementation of the business rescue plan.

It is also mere weeks before Deputy Chief Justice Raymond Zondo, who heard extensive evidence about this transaction, is scheduled to hand a report to President Cyril Ramaphosa.

Sibusiso Tshikovhi, a chief financial investigator attached to the ID, says there are reasonable grounds to believe the Gupta’s shares in OCM and OCT – held via Tegeta – are the proceeds of unlawful activity.

So too, Tshikovhi says, are the creditor claims of Centaur Ventures Limited (CVL) against OCM and if not, they are the instrumentality of the offence of money laundering. CVL’s claim was ceded to Templar in June 2020. McGowan controls both companies.

Tshikovhi’s affidavit was submitted in support of both applications. 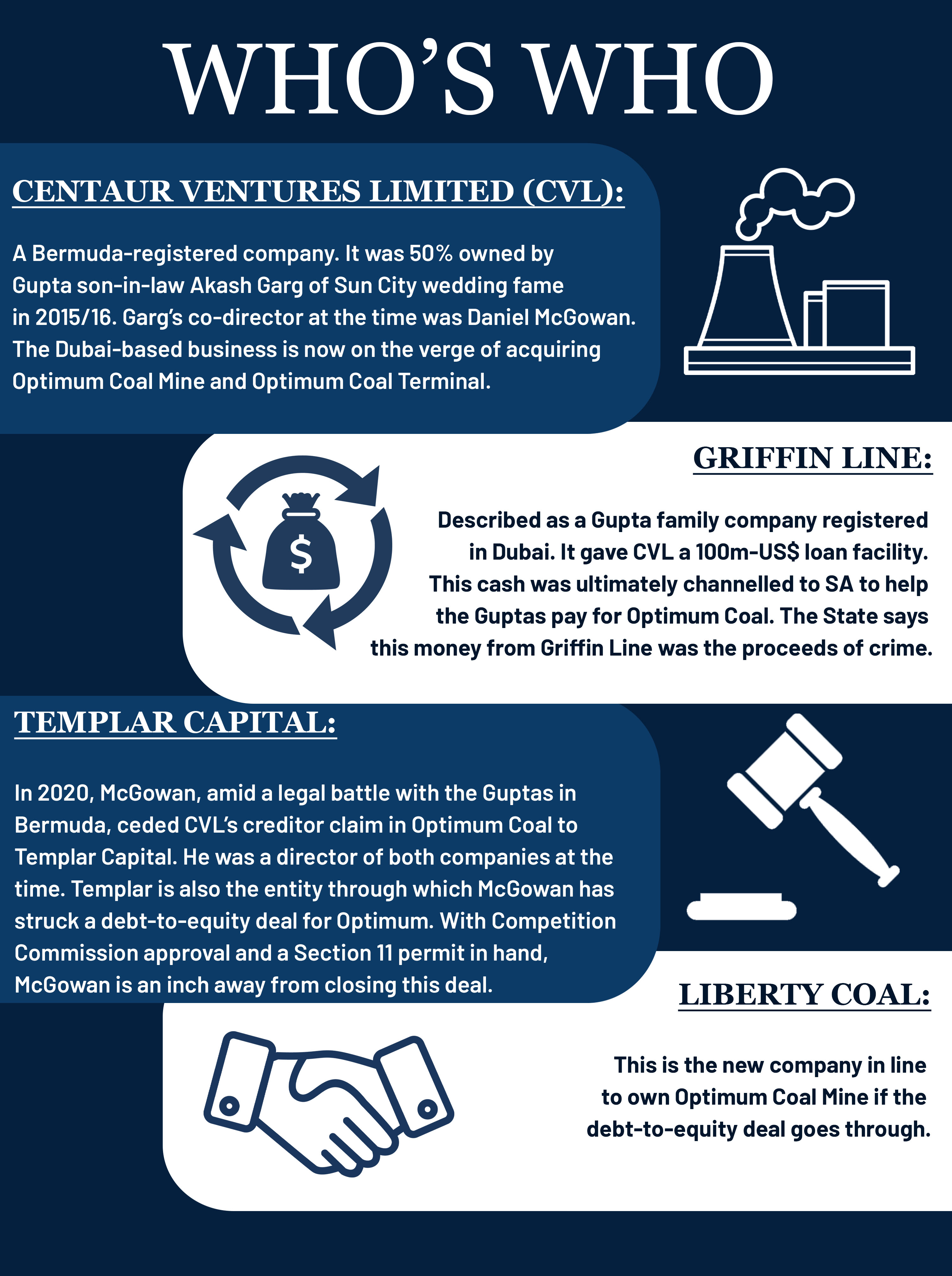 While McGowan contends that his creditor claim is in respect of coal pre-payments, Tshikovhi says most of the payments relied on should rather be seen as money laundering transactions.

Those, Tshikovhi says, were transactions by which the Guptas allegedly laundered the proceeds of crimes committed against organs of state and then used it to prop up the finances of their other entities in South Africa.

“At the very least, R1.3-billion that underpin CVL’s (now Templar) claim against Optimum are the proceeds of crime,” Tshikovhi says.

His affidavit contains an illuminating analysis of multiple transactions executed to help the Guptas mobilise cash to pay for Optimum in 2015/16, as well as several others, to cast doubt on the validity of Templar’s creditor claims. 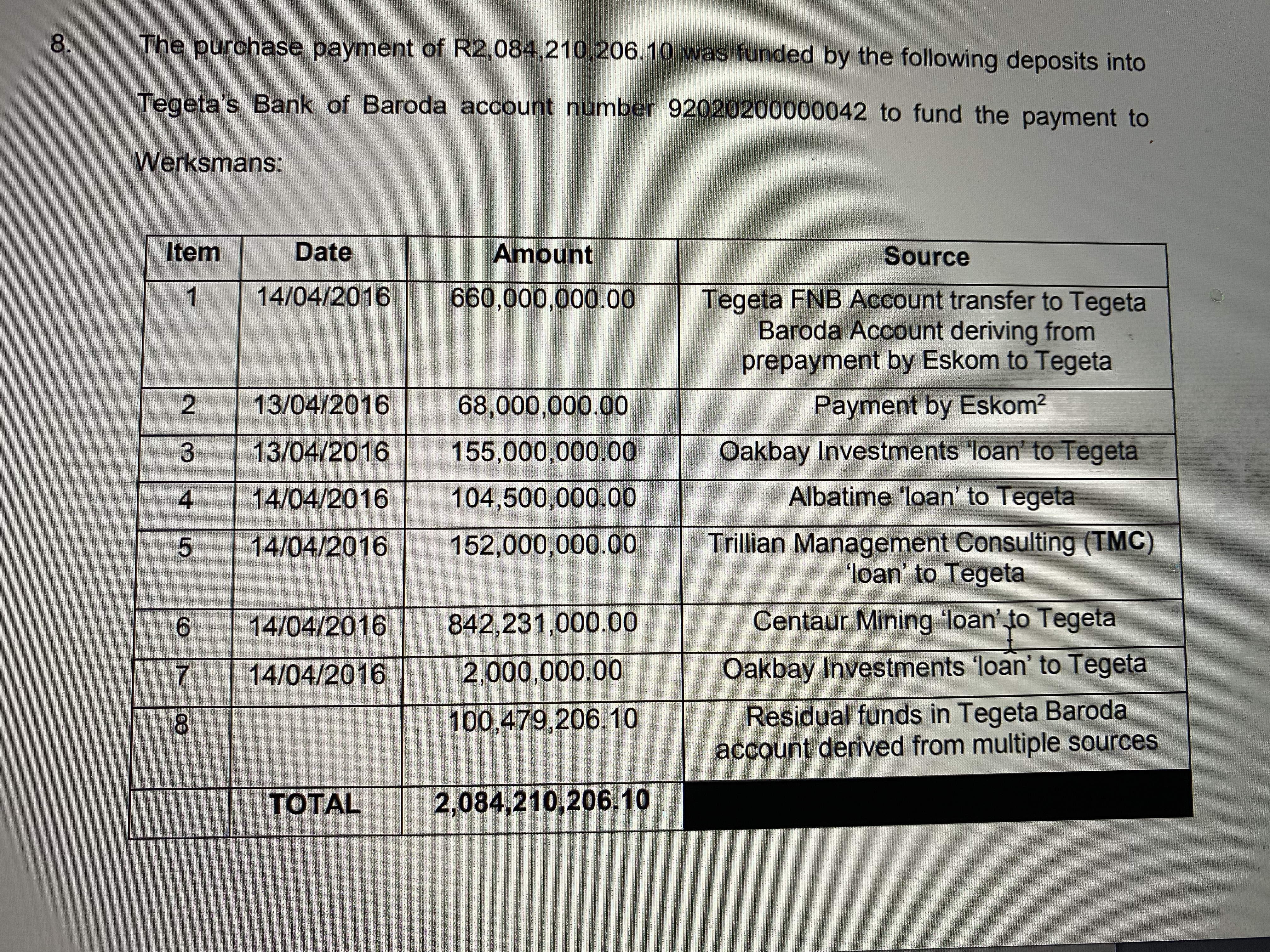 Without the cash put up by these various parties, the Guptas’ Optimum deal, then hinging on a payment deadline of 14 April 2016, would have collapsed, court papers state.

Two affidavits submitted by Cronje say the State has clear evidence that the creditor claims held by Templar – currently the largest independent creditor of Optimum – are the proceeds of crime.

“The funds underlying the CVL claims are funds that were advanced to CVL by the Gupta family’s Dubai company, Griffin Line Trading LLC, a company nominally controlled by Ajay Gupta’s son, Kamal Singhala.”

And, McGowan has himself stated under oath that money CVL received from Griffin Line was “money stolen from the South African government and laundered via Mr Singhala on behalf of his father and wider family members”, Cronje says.

Although the NPA believes it was entitled to bring the Templar application ex parte, it has been brought with full notice to parties, as the NPA does not believe there is a risk of dissipation, at least not just yet.

Cronje says the purpose of the preservation order in respect of Templar’s claim is to preserve the property. This is pending the outcome of an application for a forfeiture order that must be brought by the NPA within 90 days of securing the initial order being Gazetted, failing which it would lapse.

The criminal taint to Centaur/Templar’s claim has implications for Optimum Coal Mine’s business rescue plan. This is because the plan adopted in September 2020 resolved to allow Templar – a company controlled by McGowan – to use the CVL claims to acquire equity in Liberty Coal for McGowan’s benefit, Cronje says in her affidavit.

Read this recent article by Daily Maverick for more on McGowan’s debt-to-equity deal and his bid to help liquidate the Gupta-owned Oakbay Investments.

Cronje says the BRPs would be committing a criminal offence if they were to proceed with the debit-to-equity deal involving Templar. The rescue practitioners of OCM, according to Cronje, have known since at least February 2019 that there was reason to believe that Centaur’s creditor claims were not based on authentic coal contracts but that they were devices used to launder offshore Gupta cash to prop up their local operations.

“It is hoped that by the time this application is heard, the BRPs will have reflected on their duties not to commit money laundering crimes and will have furnished their written consent for these proceedings to continue.

“In the unfortunate event that the BRPs remain steadfast in their refusal to consent to this application, the Applicant (NPA) submits that there is an overwhelming case for these proceedings to be granted under section 133,” Cronje says.

Due to the substantial overlap of facts across the two applications, the ID has asked the court to assign the same judge or judges to the matter.

The applications are deemed urgent – in view of a looming March 2022 deadline by which date business rescue proceedings in respect of Optimum must be wrapped up. DM