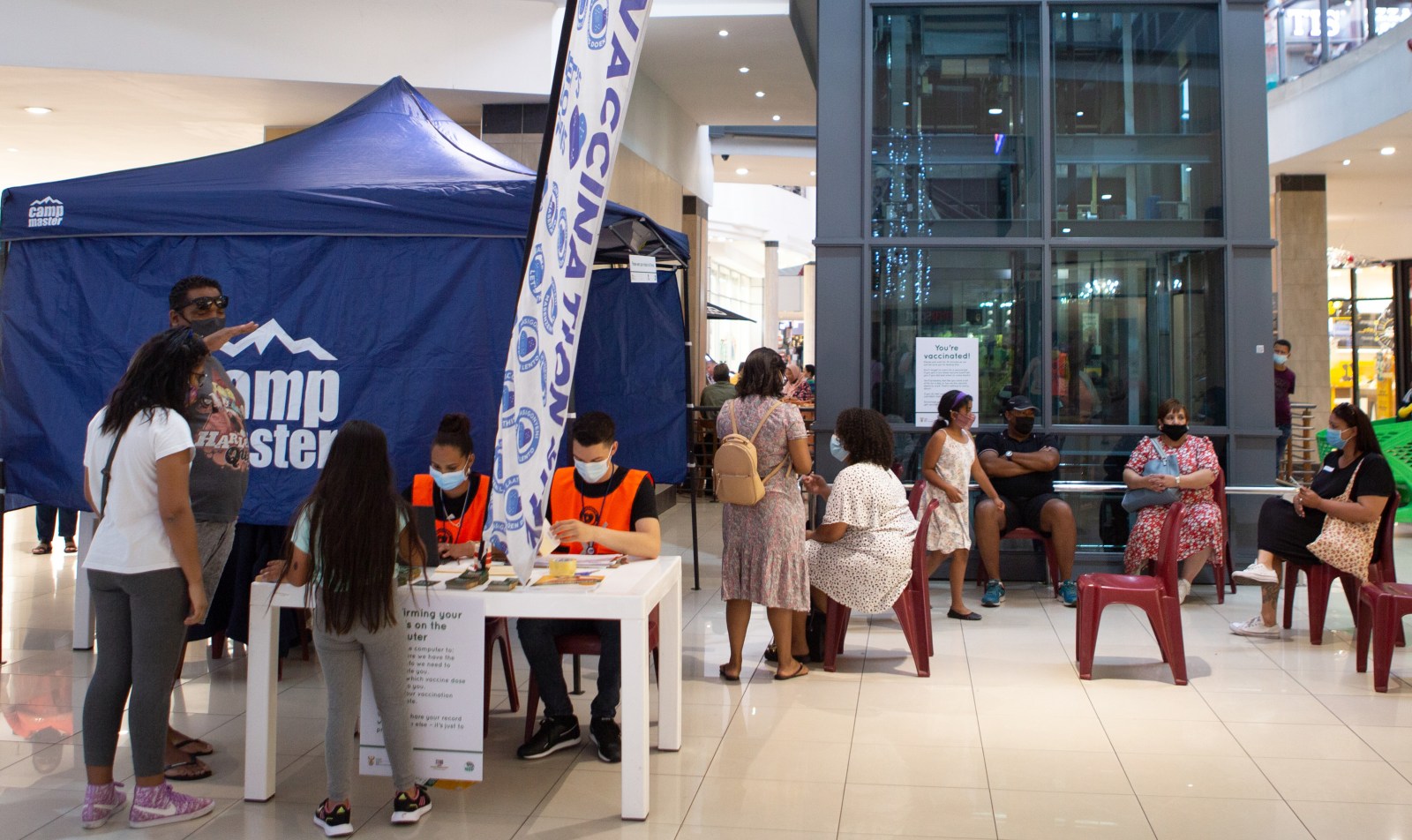 South Africa’s surge in Covid-19 cases following the emergence of the Omicron variant hasn’t overwhelmed hospitals so far, prompting some cautious optimism that the new strain may cause mostly mild illness. Experts warned, however, that it’s too soon to draw conclusions.

New York City Mayor Bill de Blasio called for a private sector vaccine mandate without elaborating how the city would enforce the requirement. France closed its nightclubs for four weeks and will open vaccination to children.

Hong Kong added more countries to its high-risk category that requires lengthy mandatory quarantine, while in Germany a professor of epidemiology who has become a public figure during the pandemic was named as the next health minister. 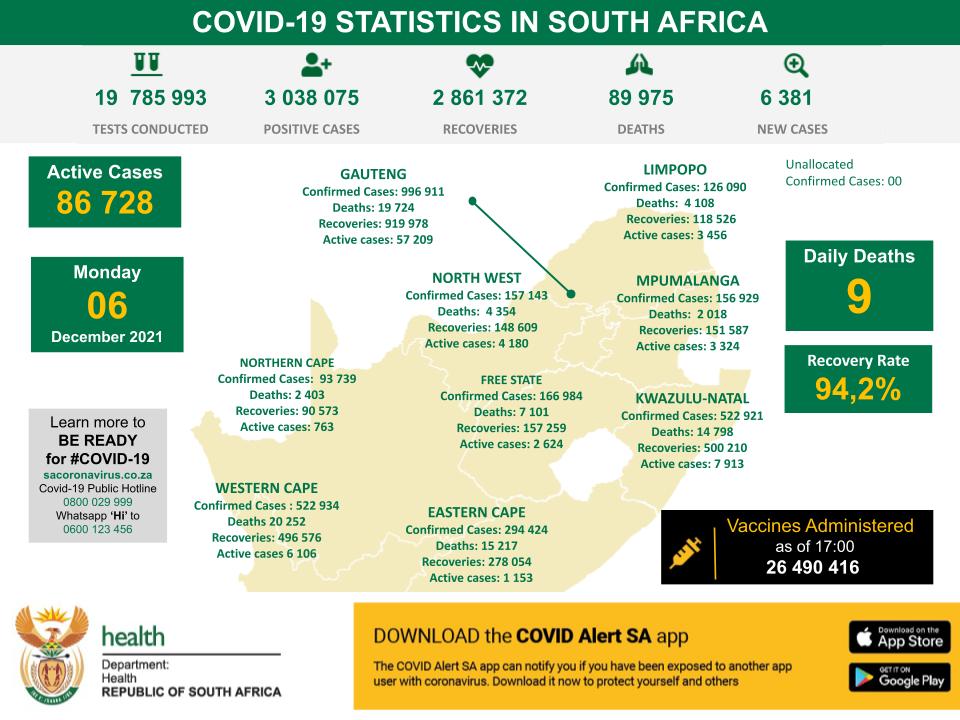 Moderna fell as much as 16% on Monday, making it the worst performing stock in the S&P 500 Index, a troubling turn for the vaccine maker that led the benchmark just last week.

It’s the biggest drop in a month for Moderna, and it comes as investors weigh the risks of the Omicron variant against a broader economic reopening. The US Centers for Disease Control and Prevention signalled hope that existing vaccines could work on the virus variant, while the country’s virus expert, Anthony Fauci, said in a CNN interview that the severity of illness may not be as bad as feared.

France will close nightclubs for four weeks and open vaccination to vulnerable children, in a bid to prevent hospitals from getting saturated this winter as the number of new Covid cases rises to around 40,000 per day.

The country could open vaccination to children between the ages of five and 11 by early 2022, Prime Minister Jean Castex said. He recommended that the French avoid large gatherings and try to work remotely. Health measures will also be strengthened in schools, he said.

“A curfew, a lockdown would be disproportionate, but the situation requires individual and collective efforts,” Castex said during a press conference in Paris. “We shouldn’t panic. While the number of cases is high, the situation isn’t the same as a year ago, as the French are massively vaccinated.”

Castex said that without the high immunisation level – around 90% of adults are vaccinated – hospitals would already be saturated, “and we would probably have a lockdown like in other European countries.” Castex “solemnly” asked non-vaccinated people to get the jab but cautioned that wouldn’t suffice to keep French hospitals afloat in coming weeks. He said the Pasteur Institute recommended reducing the infection rate by at least 10% “to exit the danger zone”.

Norway’s authorities are set to announce new measures on Tuesday to reduce contacts due to a new wave of infections with the Delta variant and a quick spread of the Omicron strain, Health and Care Services Minister Ingvild Kjerkol was cited as saying by NRK. Norway registered 2,576 new cases on Monday, 855 more than a week earlier.

New York City Mayor Bill de Blasio called for a private sector vaccine mandate on Monday without elaborating how the city would enforce the requirement.

He also strengthened the vaccine rules for access to indoor dining, entertainment and fitness, which currently requires people to have received at least one dose. Starting on December 27, people will have to be fully vaccinated to enter establishments. Children aged 5-11 will also be required to have at least one shot to enter restaurants, De Blasio said.

Omicron’s unusually large number of mutations on the gene that helps the coronavirus spread may provide clues as to how it developed, according to a computational analysis of the variant.

According to researchers, some of the hypotheses about its development include that the strain emerged from an area where genomic surveillance is low or people have little access to healthcare. Alternatively, it could have developed in an immunosuppressed person, who would have harboured the virus for a lengthy period, allowing it to mutate.

Another hypothesis is that the virus could have crossed back into an animal population, mutated, and then reinfected humans.

Germany’s incoming chancellor, Olaf Scholz, named a high-profile health expert who has taught at the Harvard School of Public Health to tackle a brutal surge in Covid-19 infections.

The Social Democrats’ Karl Lauterbach, a professor of epidemiology who has become a public figure during the pandemic, will be Scholz’s health minister when the new government is sworn in on Wednesday.

Two people recently returned from South Africa were diagnosed with Russia’s first cases of the Omicron variant, the country’s health watchdog said in a statement on Monday.

All citizens arriving from southern Africa will be quarantined in a special observatory, where they’ll face daily PCR testing, the agency said.

Roche Holding plans to introduce a test next month in Europe that can differentiate between SARS-CoV-2 and flu viruses, the Swiss drugs and diagnostics maker said on Monday.

The test will deliver results within a half hour and will help doctors figure out quickly which virus is causing a patient’s symptoms, Roche said. The company aims to bring the test to the European market in January and seek US emergency use authorisation in early 2022.

Austrians who reject mandatory coronavirus vaccinations face €600 fines, according to a draft law seen by the Kurier newspaper.

Penalties may be assessed every three months, putting vaccine deniers on the hook for as much as €2,400 a year, according to the newspaper. The amount is lower than earlier projections suggested by some officials.

Hong Kong has moved more than 30 countries into its high-risk category in the past 10 days due to Omicron, making travellers from these places spend 21 days in mandatory quarantine, including those coming from Cook Islands, a tiny tropical island that saw its first-ever Covid-19 case just two days ago.