Nearly everyone in the country has either had Covid or been vaccinated, according to the study. The vast majority of people have been infected at least once, the results of a blood donor survey show. (Illustration: Lisa Nelson)

The National Department of Health has blocked access to data from the Electronic Vaccination Data System (EVDS) to researchers from the South African Medical Research Council (MRC), the Western Cape health department, and university-affiliated pandemic research groups. This means these researchers can no longer accurately compare the spread and effect of Covid in vaccinated and unvaccinated people in South Africa.

This comes at a particularly crucial time as there are numerous unanswered questions about the Omicron variant.

How this affects the mortality data

Since the start of Covid in South Africa, the MRC has been publishing the weekly excess deaths number. This is one of the most useful and accurate pieces of information on the epidemic.

At the moment, MRC researchers receive a weekly dump of data on registered deaths on the national population register. The data includes ID numbers, the province and office of registration of death, and whether the deaths were unnatural or natural.

If the researchers had EVDS data they could analyse mortality in vaccinated versus unvaccinated people. But they can’t.

Until a few months ago, the Western Cape health department was able to produce graphs like this that showed how well vaccines were doing: 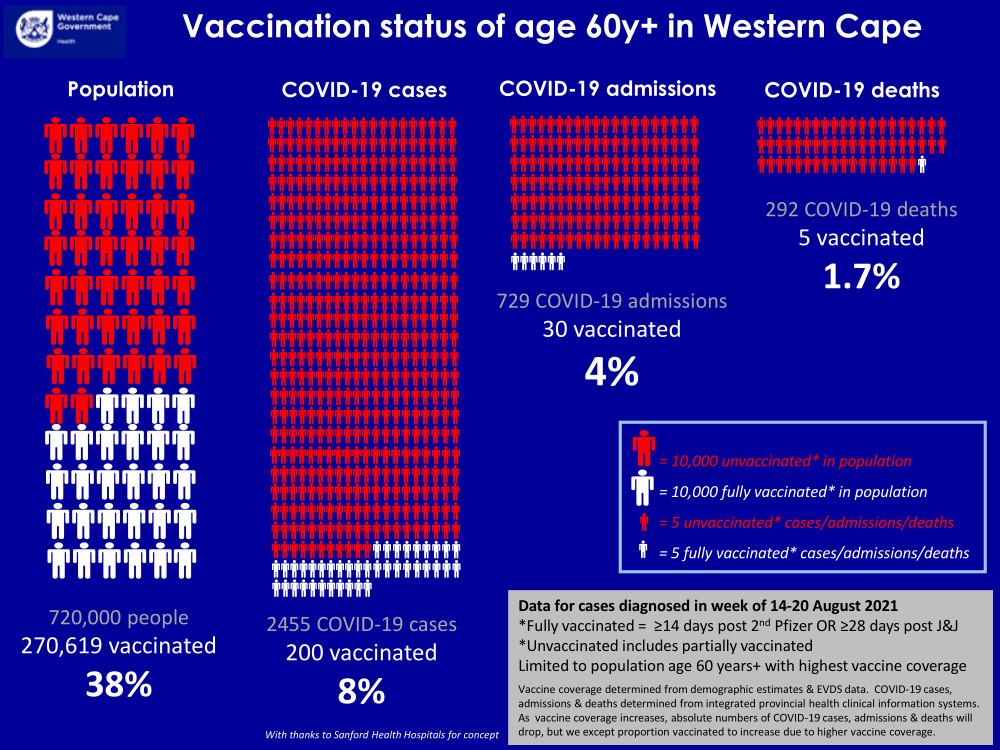 But in a weekly press conference, a Western Cape health official said his department no longer has access to the relevant EVDS data. This means the department’s researchers can no longer produce these graphs.

And that’s not the only bureaucratic hold-up

This is just the latest obstacle for epidemiologists doing vital work in South Africa.

The Department of Home Affairs does not share data on birth registrations with the MRC. This is necessary to construct an accurate picture of child mortality. Currently, MRC researchers extrapolate from health department data on births in healthcare facilities, but this is not ideal in a country where many births happen elsewhere, like in homes.

Also, since 2014, these MRC researchers have been unable to access important data on causes of death, following a change in regulation. The regulatory amendment meant that the “cause of death” page on officially used death certificates is sealed by the attending official, and can only be opened by an official from Statistics South Africa (StatsSA). Cause of death data is then only released by StatsSA in its mortality reports, generally three years after the fact.

Before 2014, Western Cape health department researchers were receiving cause of death data weekly, which allowed public health officials to respond quickly to public health emergencies like norovirus outbreaks. An August 2020 GroundUp editorial goes into more detail about this bureaucratic blockade.

Pandemic conditions justify a commitment to information cooperation across government departments in order to produce the best public health response possible. But an overly-formalised bureaucracy dulls our anti-pandemic weaponry and undermines the work of our best researchers.

Questions sent on Friday to Dr Nicholas Crisp (head of the EVDS programme at the national health department), Home Affairs, and StatsSA had not been answered by time of publication. DM