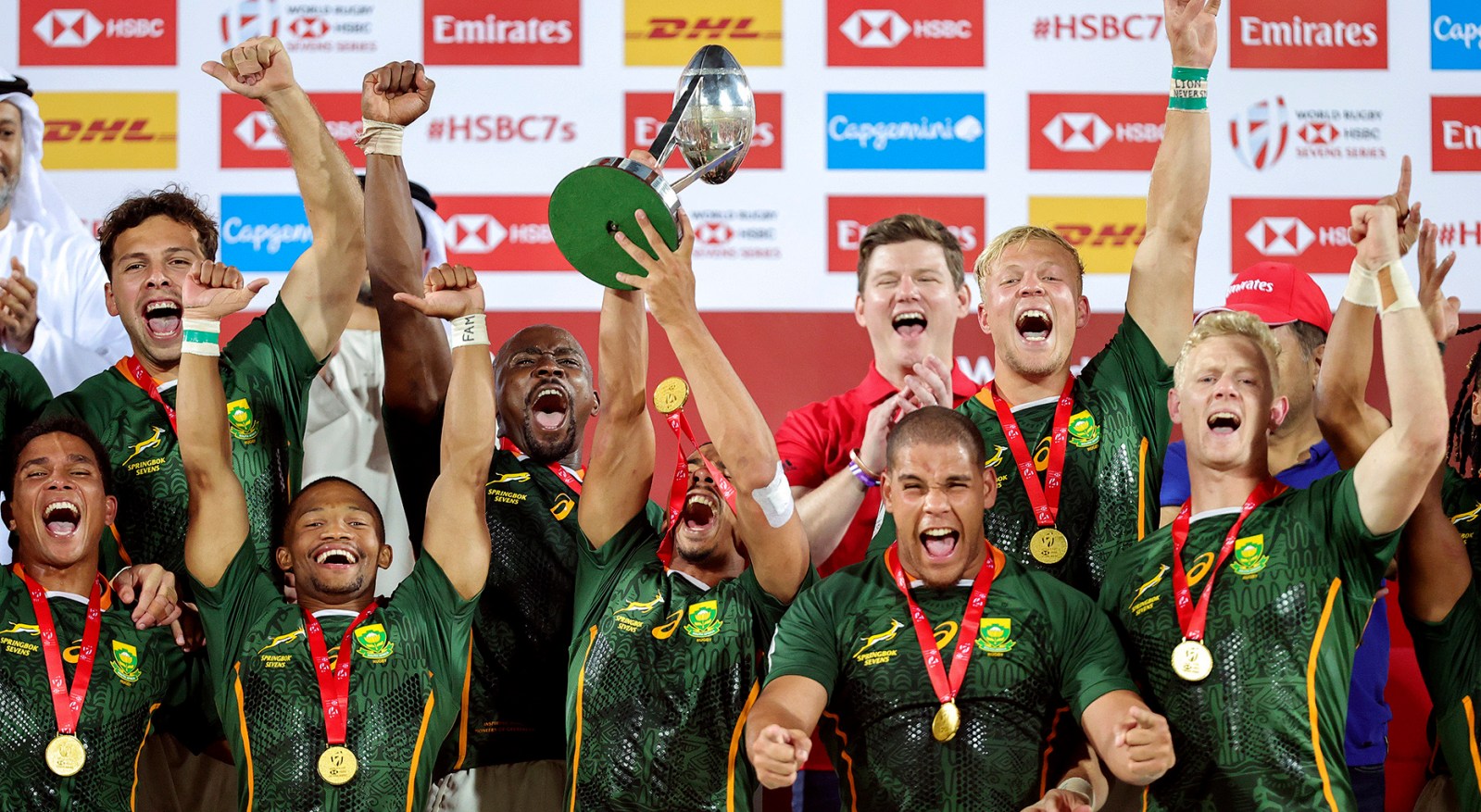 The Blitzboks have taken a firm grip on the 2021/22 HSBC World Sevens Series after their second tournament victory in Dubai this season.

The Blitzboks purred to a fourth consecutive tournament victory, and the second of this season, on the HSBC World Sevens series thanks to a 10-7 win over Australia in the final of the Dubai event this weekend. Winning four in a row is a new record for the Blitzboks.

Dubai staged the opening two legs of the 2021/22 season and the Blitzboks powered to both titles, although after round one’s comfortable 42-7 romp over the USA in the final, round two was a much sterner test against the improved Aussies.

The entire tournament was more difficult for the Blitzboks, who also laboured to a 31-19 quarterfinal win over Kenya and a 19-12 victory over France in the semifinal.

Coach Neil Powell had warned that week two in the desert would be more difficult as players had to “reset” after week one’s tournament victory, and he was right. The Blitzboks were not as dominant as they had been and leaked some uncharacteristic tries, yet still managed to win all six matches. They have now stretched their match-winning streak to a record 24.

The Blitzboks won the only two titles of the curtailed 2021 season in Vancouver and Edmonton, to be crowned World Series champions for a fourth time. On their way to those tournament titles in Canada, they won 12 out of 12 matches and mirrored that feat in the Dubai double-header.

South Africa went into round two with only 11 fit players in the squad (instead of the usual 13) because they were unable to fly in replacements between rounds one and two.

That was because the United Araba Emirates is one of several territories and regions to impose a travel ban on movement from southern Africa after the Omicron Covid variant was identified in Botswana and South Africa.

Ryan Oosthuizen and Muller du Plessis, who were injured in round one in Dubai, could not be replaced as planned, with Angelo Davids and Dewald Human leaving the team short in their onfield preparation.

Powell and assistant coach Renfred Dazel, both former Blitzbok players, did what you’d expect from a team that is focused on solutions rather than problems and jumped in at training to provide extra men during those crucial field sessions leading up to round two.

“It was a week full of challenges,” Powell said. “The plan was to bring those two over as replacements, but unfortunately we couldn’t do that before the borders were closed for international flights.

“We as management had to jump in to make sure we had two squads of seven players to train with.”

Whatever they did, it paid off as the Blitzboks won again to move to 44 log points, 10 clear of Argentina, who have been third in each of the first two rounds.

The World Series resumes in late January when it makes its debut in Malaga, Spain, for round three.

South Africa skipper Siviwe Soyizwapi got them off to the perfect start in the final when he scored in the first minute. However, Australia got back into things when Corey Toole showed brilliant pace down the left to level the scores at 5-5. Dietrich Roache converted and Australia were 7-5 up at half-time.

The match-winning moment came with three minutes to go when JC Pretorius secured a crucial turnover from Billy Meakes and 60 seconds later he was taking a leading role in attack, scoring an unconverted try to take South Africa into a 10-7 lead, which they held on to until the final whistle.

Soyizwapi said: “It’s an unbelievable feeling and takes us back to all the hard work we put in at home to prepare us for these tournaments and this is a good reward before Christmas with these victories.

“We looked back and said this is the reward of all those breakdown and wrestling sessions in the heat in Stellenbosch. Character is everything when you put on this jersey and that’s what we stand for as a team.

“Australia really took us to the wire; it was a brilliant match. Credit to my boys though, we battled so hard for each other and showed grit when we had to. It is such a great way to end 2021.

“These boys really play with heart, no one can buy that, it comes from within and it’s in our mindsets. We are part of an awesome system and the heart shown by these boys is incredible. The crowd really brought so much atmosphere and energy to the stadium.

JC Pretorius was named player of the final, keeping the award in the squad after Ronald Brown earned the accolade in round one. DM