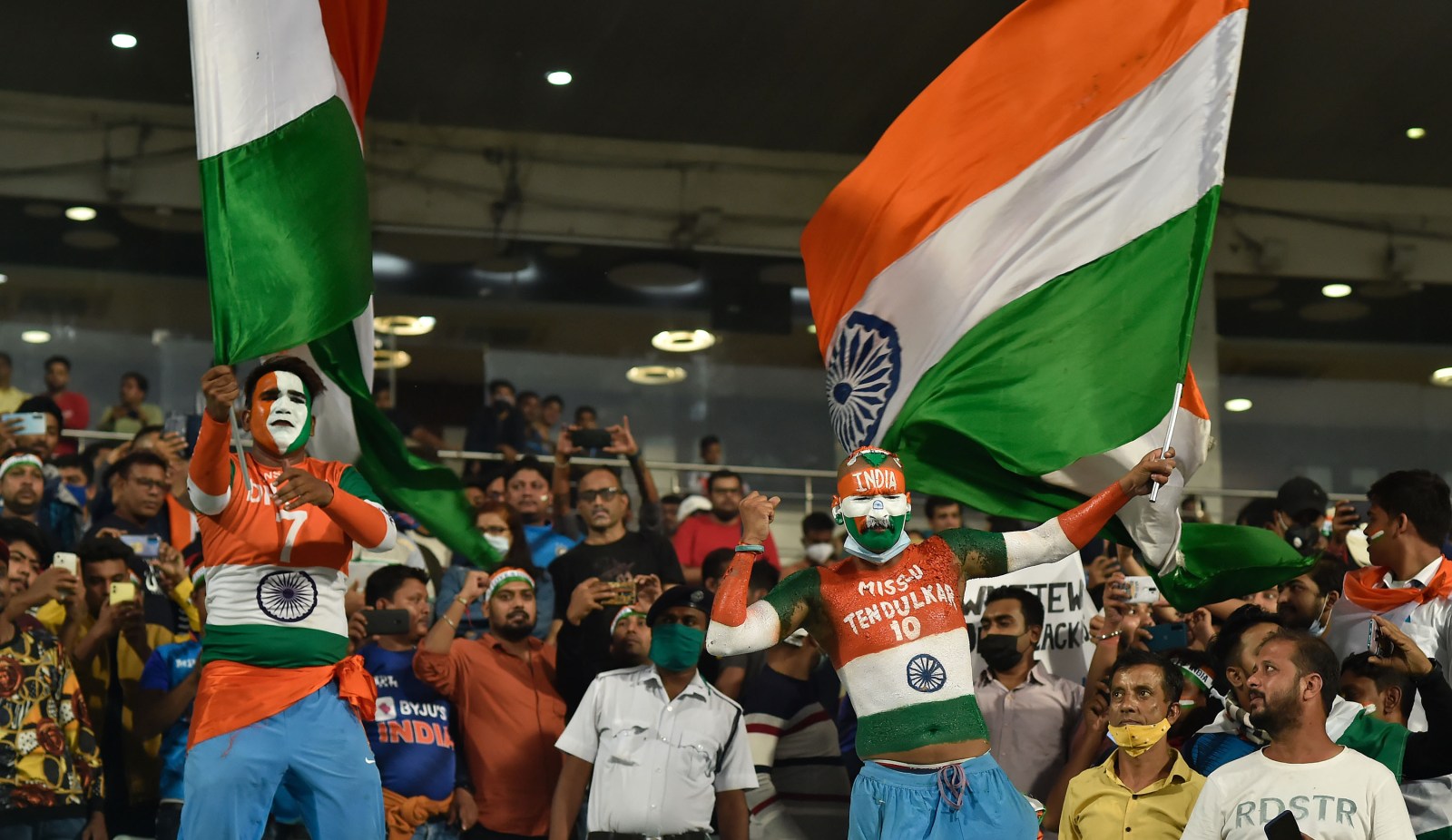 Fans at the third T20 International match between India and New Zealand at Eden Gardens in Kolkata on 21 November 2021. (Photo: Pankaj Nangia/Getty Images)

South Africa’s sporting summer is on a precipice as events are rescheduled and cancelled due to the new Covid variant. Fortunately, the highly lucrative and essential India cricket tour to the country is still set to go ahead – for now.

The only certainty in world sport at the moment is its uncertainty. Covid-19 and its multiple variants – Beta, Delta and now Omicron – have ripped up schedules and led to 21 months of crisis management in sport that has reshaped the global landscape.

In South Africa, Covid has scuppered big tours and events and forced administrators to come up with solutions to problems they could never have envisaged. Some have done better than others in riding out a pandemic that shows no signs of abating.

For Cricket South Africa (CSA), this summer’s India tour to the country simply must take place. It could, quite literally, be make or break for the sport.

Globally, cricket’s financial pie is divided in four-yearly broadcast cycles for each of the major Test-playing nations, and within that cycle a visit by India is the most essential.

Hosting unions earn the bulk of the broadcast rights, sponsorship and gate revenue of home tours. No team demands higher broadcast and sponsorship fees than India, while gate takings are nominal in a Covid world.

As the richest and most watched team in the world of cricket, and quite possibly in any sport given India’s passion for cricket and sheer population size, India’s men’s team is the lifeline of the sport.

Recently England cut short their tour of South Africa, costing CSA about R30-million in revenue, if it cannot be completed in the current cycle.

Australia’s decision to pull out of their tour to South Africa earlier this year has also put strain on the calendar because they have committed to touring “at a later date”. No firm decisions have been made on the rescheduling of that white-ball series either and if it doesn’t go ahead sometime in the next 18 months, CSA would lose another R40-million.

England and Australia tours are good earners, but are crumbs compared with a home series against India.

CSA, after announcing a R221-million loss for the 2020/21 financial year due to Covid and their own corporate governance failures that have seen sponsors flee, India’s tour represents a way to balance the books.

The annual report also stated that CSA had cut expenditure from R1.2-billion to R700-million and that it had cash reserves of R121-million and investments that “would mature” shortly, upping reserves to R363-million.

There is still 18 months to go on the current broadcast cycle and India must tour South Africa somewhere in that period. December 2021 and January 2022 has been set aside as the window for the tour, but Omicron might force it shut.

That would set a clock ticking for CSA because they would need to somehow reschedule the tour before the current broadcast cycle ends to meet their income projections for the four-yearly cycle.

Tours and fixtures are locked in years in advance and rescheduling a seven-week India tour is not easy, especially as India and the Proteas’ calendars are jam-packed in 2022 already.

Quite simply, if the 2021/22 India tour is called off in the coming weeks, CSA could be in a financial hole that has the potential to collapse the sport at a professional level in this country.

So, it’s a relief that the Board of Control for Cricket in India (BCCI) is still making the right noises about the tour going ahead. Also, the governments of both South Africa and India seem to be aligned in efforts to keep contact between the countries open despite many parts of the world shutting off travel to southern Africa in the wake of the detection of the Omicron variant.

India A are currently involved in a three-match series against South Africa A in Bloemfontein. The BCCI did not withdraw the team from South Africa when news of Omicron emerged.

“South Africa will take all precautions necessary to ensure the health and safety of the Indian teams,” a statement from the South African Department of International Relations read.

“A full bio-secure environment will be established around both the South Africa and India A teams as well as the two national teams.

“The anniversary will be celebrated by a commemorative event that will take place on 2 January 2022 in Cape Town. This event will also serve to highlight the strong ties between South Africa and India, which is once again demonstrated by the tour of the two Indian teams.

“India’s decision to show solidarity by choosing to continue with the tour of the Indian A team stands in contrast with a number of countries who have decided to close their borders and to restrict travel from southern Africa after South Africa announced the detection of the new Omicron variant.

“The South African government has expressed its appreciation to the BCCI for allowing the tour to continue and for not letting travel restrictions negatively impact on international sports.”

As laid out in the statement, the emergence of Omicron means the relatively relaxed lifestyle of the past few months will give way to hard bio-secure environments (BSE) to ensure the tour goes ahead.

The Proteas players are no stranger to BSEs but the mental toil of being isolated is significant. India have also endured many BSEs over the past 18 months and will have to steel themselves for another.

A recent study of cricketers in India, undertaken by the Government Institute of Medical Sciences and Research, Srinagar, Uttarakhand noted: “The players have to spend a long period of time away from their families. Moreover, during the pre-competition quarantine phase, players are restricted to their hotel rooms only.

“This can have an adverse effect on the health of the players as they have to spend a lot of alone time, which can lead to introspection and rumination consisting of constant negative feelings.

“The players are susceptible to various mental health issues, including mental fatigue, depression, anxiety or insomnia.

“In most of the cases, there will be no signs in the athlete on general physical examination and diagnosis needs to be made on the basis of the presence of various symptoms including feeling low, sleep disturbances, anxiety, change in eating habits and a lack of motivation.

“Mental health issues need prompt identification and treatment as not only can it affect the performance of the player on the field, but it can also have an adverse impact on his physical health and personal life.”

The Proteas men’s team has been part of eight international cricket BSEs in total – these have ranged from home tours against England, Sri Lanka, Pakistan and most recently the Netherlands, to away tours to Pakistan, West Indies, Ireland, Sri Lanka and the ICC T20 World Cup in the United Arab Emirates and Oman.

According to the CSA’s chief medical officer, Dr Shuaib Manjra: “CSA has instituted world-class standards and measures to ensure that all players, staff and officials are protected within this environment. Our main focus was to safeguard the cricket biosphere by managing strict entry standards and limited movement outside of its cordon.”

Manjra has emphasised that the BSE has met the highest standards set by the government and CSA is continuously looking at ensuring that the management of the BSE is second to none in the world.

“Playing cricket in a BSE was a massive challenge for everyone involved in the game,” Proteas white-ball captain Temba Bavuma said.

“Everything changed, from the length of our stays in hotels, to how we train and play. We weren’t even allowed to high-five or hug each other when we celebrated wickets – that part was easier to remember for some more than others.

“CSA has to be commended for the way that they have gone about the BSEs. It hasn’t been an easy year for us all. Being confined to a hotel room and being restricted from leaving the hotel and having the choice – in most places away from home – between your room and the team room and little access outside the hotel takes its toll, particularly for the all-format-playing members of the team and management.

“I’m confident that our BSEs are of the highest safety standards and the protocols are set not only with everyone’s physical wellbeing, but mental health in mind.”

Proteas Test skipper Dean Elgar added: “It’s hard to believe that we’ve been working in these BSE conditions for a year now, but anyone who has been affected, either directly or indirectly, by the Covid-19 virus knows that this is a necessity if we want to continue playing cricket.

“It takes a toll on a player mentally and yet this team continues to produce good results and make progress – that’s something that I personally don’t think is being spoken about enough.

“The measures that have been put in place and the hotels that have been chosen take into account the teams’ physical and mental health needs. We don’t know how much longer we’ll be operating like this, but it’s gratifying to know that when tours come around the health and safety of all involved is top priority.” DM