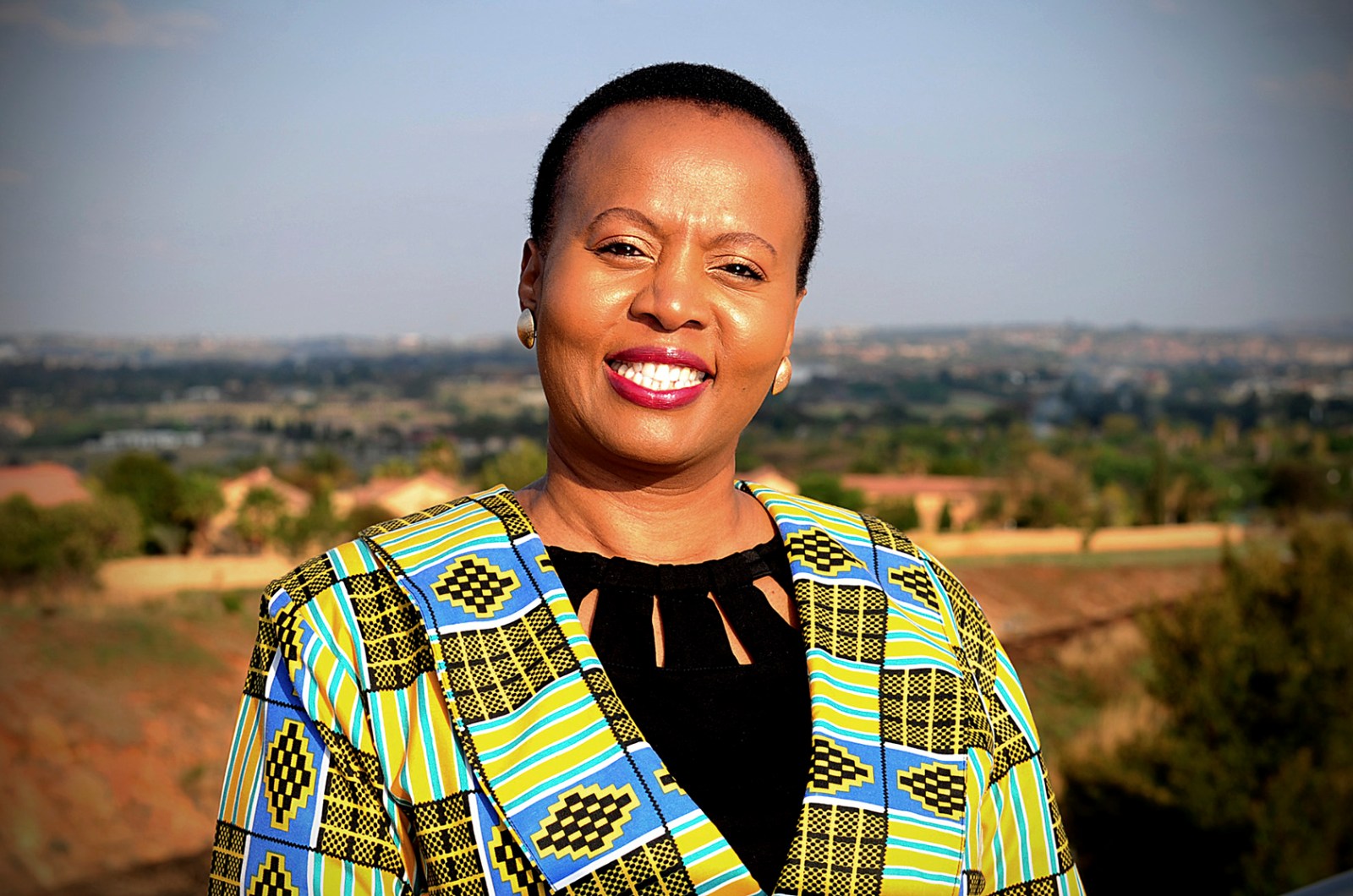 On World Aids Day, Dr Thembisile Xulu, CEO of the South African Aids Council shared a podium with Deputy President David Mabuza for the country’s official commemoration event in Limpopo. Bienne Huisman spoke to her about how she settled into the CEO role and what keeps her busy.

It’s Monday morning 8am. Dr Thembisile Xulu, just off the red-eye from Durban, is about to hit the road to Limpopo in preparation for World Aids Day. A year had passed since Spotlight interviewed her shortly after her appointment as CEO of the South African National Aids Council (Sanac) in October last year.

During last year’s interview, Xulu described herself saying, “When I sit in a room, I don’t necessarily regard myself as the smartest. In fact, mostly I’m not. I thrive when I manage people who are smarter than me. My job is to inspire and to drive the bus. But I need team members holding the GPS to say ‘driver, this thing is not going the right way, we need to go there or there’.”

Having now been in the driver’s seat at Sanac for a year, Xulu stresses that an integrated approach is key to fighting the “colliding epidemics” of our time. She was speaking from her Johannesburg home, with a Sanac poster behind her.

“Our theme for World Aids Day this year is working together to end inequalities in Aids, TB, and Covid-19,” she says. “Our tagline is: Get tested. Get vaccinated. Adhere to treatment. Essentially, it is meant to bring together all these colliding epidemics we have — HIV, TB, and Covid-19.

“So if you get tested; you not only know your HIV status or your TB status; you know your hypertension, your blood pressure, your cholesterol, your Covid status, and you also get vaccinated.”

At Sanac’s World Aids Day gathering in Xikundu Village in Limpopo, Deputy President David Mabuza as Sanac chairperson will give the keynote address. Xulu says that to really successfully convey their message at grassroots level — in order to really shift perceptions — collaborating with traditional leaders is key.

“We need to tap into the power and the strength that traditional leaders have,” she says. “Our traditional leaders are holding indabas and they’re holding meetings with their communities. And if they are the ones that are constantly speaking about HIV and TB and Covid-19, people will listen.”

Xulu grew up in the Durban township of Inanda and can relate.

“I come from that life and I know how well respected the King or the chief is. In Zulu, there’s a saying that if something comes from the mouth of the chief, it’s golden, it’s taken as the truth. So we are tapping into that,” she says.

Amongst other things, Sanac hosts South Africa’s Global Fund Country Coordinating Mechanism (CCM). This means the council is responsible for interfacing with international donors on South Africa’s behalf; then allocating and tracking funding running into billions of rands.

When asked about the scope of international funding, Xulu points out that The Global Fund [The Global Fund to Fight Aids, Tuberculosis and Malaria] will allocate $536-million to South Africa over a three-year period, starting April 2022. Pepfar [the United States President’s Emergency Plan for Aids Relief] will allocate over $435-million this year alone.

Pushed on the specifics of this function, she says: “Sanac’s role is to make sure that the council galvanises all the stakeholders towards the implementation of the NSP [National Strategic Plan]. We are not the ones who directly get the money. But we ensure optimal allocation, non-duplication and we measure outcomes and performance. The ‘principal recipients’ of The Global Fund answer to us on a monthly basis.”

Sanac is also the forum through which South Africa’s National Strategic Plan (NSP) for HIV, TB, and STIs is developed. Currently, the 2017-2022 plan is in effect — mapping the measurable goals set for the country’s fight against HIV, TB, and STIs.

Due to backlogs created by Covid-19, Xulu says the current NSP will be extended to 2023 with “catch-up plans” across sectors.

In recent years it has at times appeared that key HIV policies are determined inside the Department of Health or by guideline committees without Sanac necessarily playing a meaningful role. When asked whether Sanac actually has an impact on HIV policy in South Africa, Xulu responds that Sanac brings together various stakeholders in formulating HIV policy.

“Sanac is a body established by cabinet to ensure that there is a multi-sectorial response to HIV and it is located in the highest office in the country — the Presidency,” she says. “The goal is [getting] everyone to realise that HIV is not just a health problem. HIV requires all sectors of society. That’s why the plenary of Sanac is composed of government, of civil society, of the private sector, of development partners, of labour, etcetera. For example, the mining sector is rife with TB. So the Department of Minerals and Energy sits on Sanac.”

She illustrates the interrelatedness of cultural norms and transmission, citing findings from a recent TB prevalence survey. “We found that men have a higher incidence of TB than women,” she says. “So, men’s health-seeking behaviour is very low. I probably don’t have the right words for men. Men don’t want to test, you know. Men still use their wives as proxies to test for HIV. They say my wife is negative, which means I’m negative. Men don’t want to be on treatment. Men just don’t want anything to do with health facilities. As a result, for instance, let’s just say he’s got Covid. It means he’s coming home to his family, every day and spreading it. Maybe he’s got HIV and he refuses to test. It means if he’s in a rural area where polygamy is a thing, he’s still spreading HIV to all his wives.”

As a further illustration, she points out the StatsSA findings published last month showing that 688 girls aged nine to 10 years old gave birth in South Africa in 2020.

“It is unacceptable, completely unacceptable,” says Xulu. “So yes, at this weekend’s plenary, the Department of Basic Education presented a learner pregnancy management strategy that has been adopted by cabinet. They essentially got a whole package of services aligned to make sure that girls are strengthened in and out of schools.

“But the key thing is that there’s no nine or 10-year-old that falls pregnant in the classroom. Research shows that our young girls are impregnated by older men. And these older men need to be held accountable by the law, which means there needs to be better collaboration. And I speak really as a Sanac multi-sectoral administrator. There needs to be better collaboration around health, starting at the school. When the school is aware that there’s a pregnant girl and she is underage, you know, by the time she gets to deliver, health needs to report that to the department of social development — the custodian of children — and then involve the police services, too.”

Xulu says that South Africa and our NSP are significant in a regional context.

“In June, we went to the United Nations high-level meeting on HIV and Aids for Africa where each member state actually put forward their declaration towards ending HIV. And you find that there are countries that actually really rely on the voice of South Africa when it comes to issues of human rights, LGBTQ issues, or issues relating to other key populations that still find themselves being persecuted because of the laws that these countries follow,” she says.

“So people rely on South Africa because we’ve got such a strong Constitution. And our NSP is very clear in terms of key populations that nobody should be left behind. For example, you’ll find that men who have sex with men are not legally acceptable in many countries in Africa.”

“The sex worker sector actually warned Sanac that this was the last plan that was being signed without decriminalising sex work,” she adds. “The sex worker plan is a complementary document to the NSP for TB/HIV, and STI’s, similar to the LGBTQI plan…”

Before taking over the reins at Sanac a year ago, Xulu worked for 16 years at HIV treatment non-profit organisation, Right to Care. Before that, she did perinatal HIV research at the Chris Hani Baragwanath Academic Hospital in Johannesburg. DM/MC