Business and labour throw their support behind mandatory vaccinations 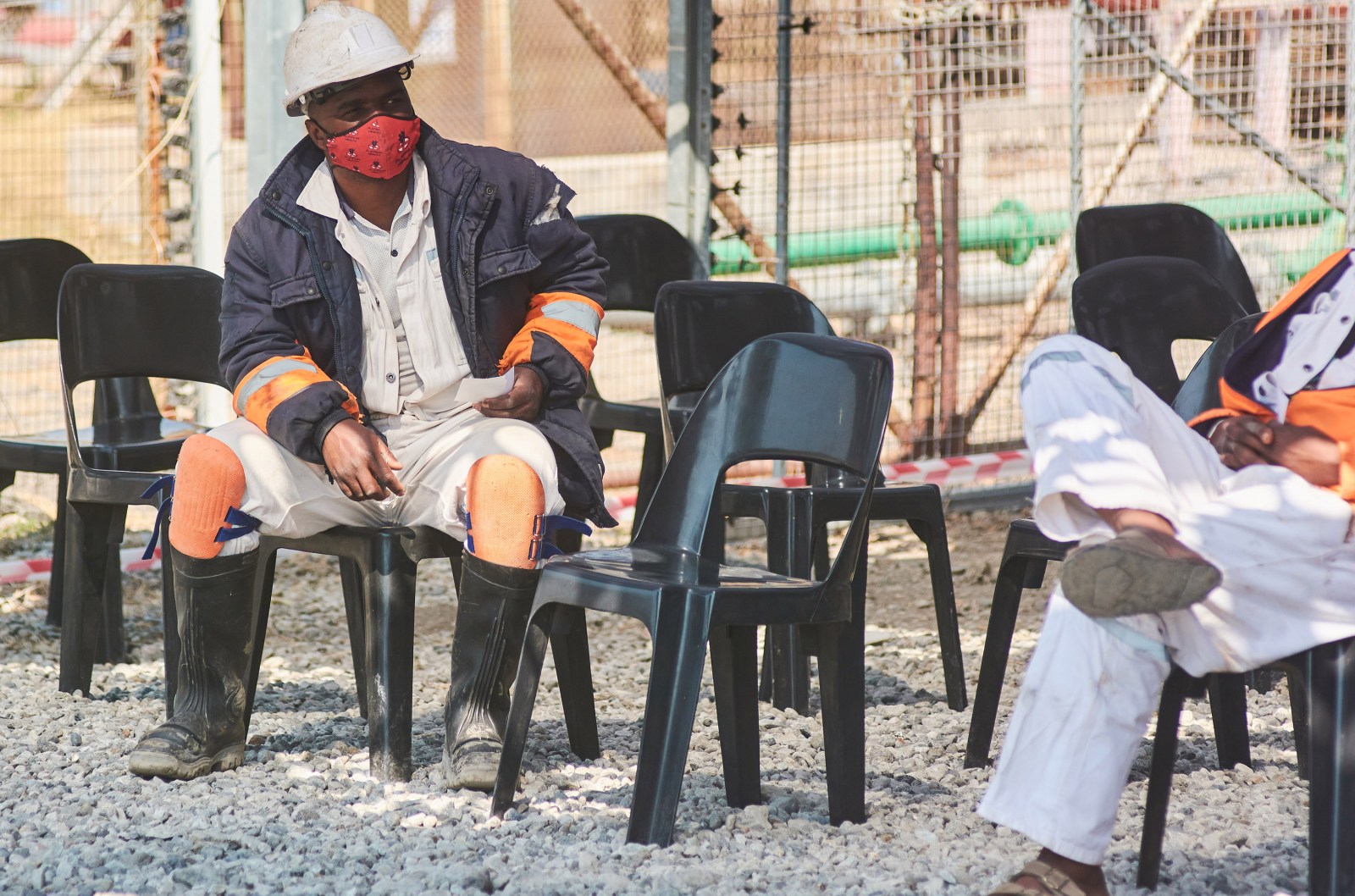 A miner waits in an observation area after having a Covid-19 vaccine at Anglo American Platinum’s Dishaba mine in Amandelbult, South Africa. Business and Cosatu support vaccine mandates and the imposition of public access restrictions for the unvaccinated. (Photo: Waldo Swiegers / Bloomberg via Getty Images)

South Africa’s gently, gently approach to getting vaccinated has been a dismal failure, with less than 35% of the adult population having been inoculated. As a fourth wave of Covid looms, it is clear another approach is required.

Mandatory vaccines and vaccine certificates were once dirty words in South Africa, with President Cyril Ramaphosa assuring the population in February that nobody would be forced into having a Covid-19 vaccine.

However, the combination of a stuttering economy, slow vaccine adoption rate and a rapidly advancing fourth wave of infections have combined to make such a stance a luxury South Africa can no longer afford.

The government recognises this and on Sunday night the president announced that a task team had been established to examine the pros and cons of making vaccination mandatory for specific activities and locations.

This move has been supported by business and Cosatu, which have, for some time, been calling on the government to explore vaccine mandates, and for the imposition of public access restrictions for the unvaccinated.

“Vaccine mandates and restricted access to public places are the only way to reduce the surplus deaths and prevent overwhelming the health system,” says Martin Kingston, executive director of Business for South Africa (B4SA).

“We endorse the approach of Cyril Ramaphosa. South Africa cannot afford to move from adjusted Level 1, but we are mindful of the emerging fourth wave, and the new variant, about which we don’t know much.”

In a statement issued on Monday, Cosatu said that any restrictions “must be imposed on those who fail to vaccinate. Those who vaccinate must be allowed to move on with life. Incentives and rewards should be used to encourage everyone to vaccinate”.

Both social partners are mindful of the fact that there is “no fuel left in the tank” for the support of individuals and businesses hit by lockdowns and by local and foreign tourists who elect to stay at home.

“We are very concerned, as is the president, by the countries that have chosen to impose travel restrictions on southern Africa. The bans are not based on scientific evidence and have led to wholesale travel cancellations that have the potential to decimate what is left of our travel and hospitality industry,” says Kingston.

In October, Business Unity SA (Busa) announced that it planned to approach the high court for a declaratory order to provide business owners and employers with certainty on where exactly the law stands when it comes to mandatory vaccination in the workplace.

“Business has a responsibility to ensure a safe workplace for all. We support that and so believe it’s important to get legal clarity,” says Cas Coovadia, CEO of Business Unity SA.

“We have briefed advocates and met with senior counsel in this regard. We have not yet filed an application because our SCs have tasked us with some preparatory work, to ensure we approach the court with the right request.”

In addition, both Busa and B4SA will join any court action where employers are challenged on any mandatory position they choose to implement.

“Before Discovery instituted mandatory policy, 75% of their staff were vaccinated. Now 94% of employees are vaccinated, showing the policy definitely had an impact,” says Coovadia. “This is based on science. The science tells us the best weapon is to vaccinate as many people as possible, as quickly as possible.”

B4SA is also calling for a rapid move to restrict access to certain public spaces to people who are vaccinated. This includes the likes of hospitals, supermarkets, large-scale events, restaurants, bars and places of worship.

“We respect the individual rights of people not to be vaccinated,” said Kingston. “But, for example, when it comes to healthcare workers and old age homes, it is clear that every possible measure must be taken. We think it’s a matter of time before the government changes its stance [its voluntary vaccination policy] and we would encourage them to do so as a matter of urgency.”

In the European Union, the widespread use of Covid-19 certificates and successful vaccine roll-outs have driven a high vaccination rate and helped tourism in the region to recover faster than elsewhere in the world, according to a recent UN report.

This is something South Africa may emulate. BM/DM