Down and Lights Out 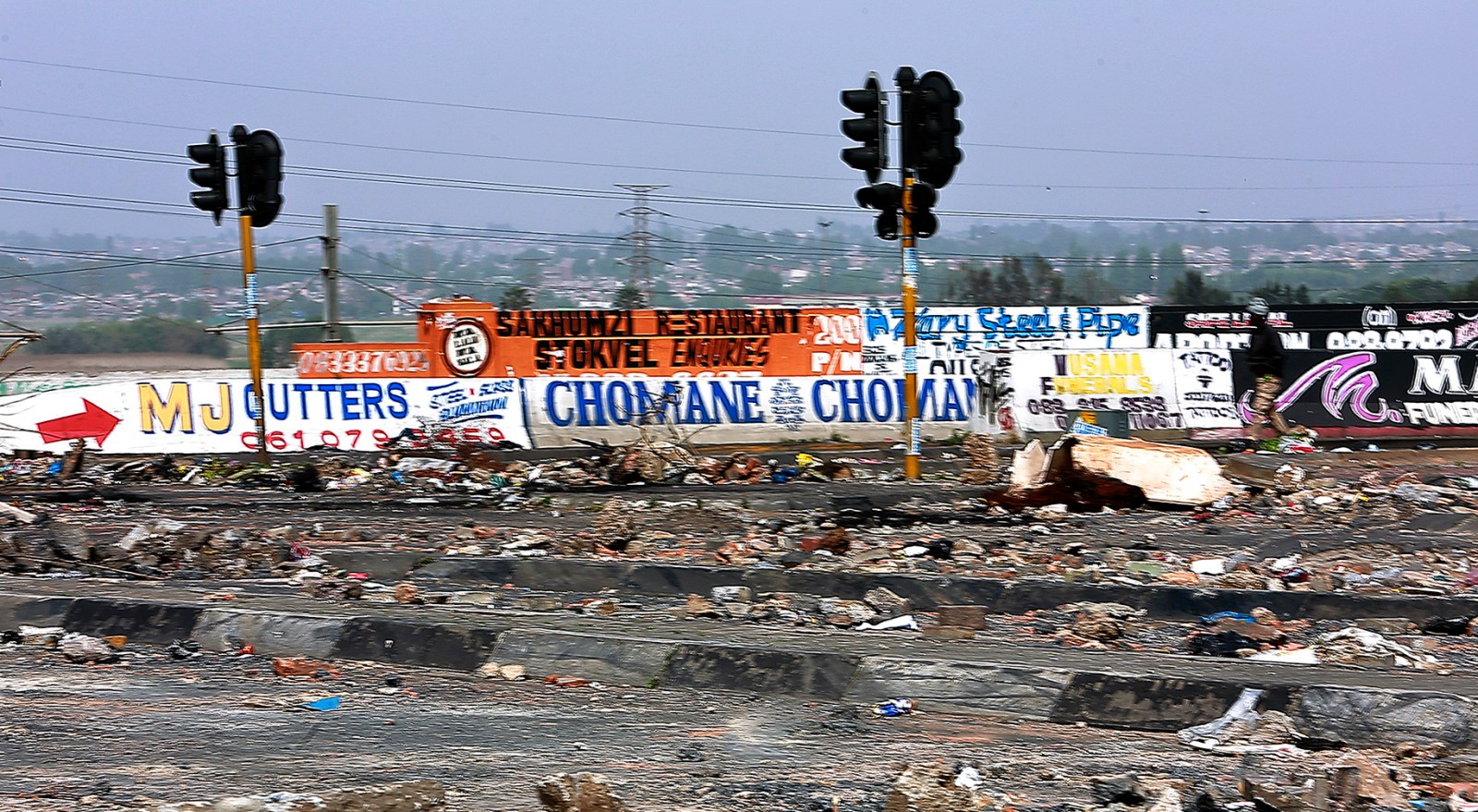 Roads barricaded with rocks, burning tyres and garbage during a service delivery protest in Orlando East on October 18, 2021 in Soweto. (Photo by Gallo Images/Fani Mahuntsi)

At the time of writing this story, the power had been out in Orlando for six days. The local councillor says it is not her problem. ‘Ask Eskom!’ she says. Tshabalira Lebakeng from the Homeless Writers Project describes what it means for poor people when the electricity goes off. How do people survive and what does it mean for hope?

Right after the local elections, the electricity  went out in Orlando. At around eight that night I was boiling potatoes and … everything went dark.

Here in Orlando electricity doesn’t go off for one or two hours. It goes off for days and sometimes weeks.

Everyone went outside to see what was happening. We waited and hoped it would be back in one hour. Old man Mazibuko said: “We must start calling our friends, to see who has electricity to try to save our food.”

He asked me if I had bought food. I told him I had.

“Now your last money is going to waste,” he said. “You don’t know this place. You’ve only been here six months. I grew up here.”

So I went to sleep without electricity.

In the morning; still no power. The day was really hot. Everything was starting to melt.

In the middle of winter electricity went off sometimes for a whole week. Some of us were freezing to death because we stay in really cold places with no heating. But in some ways it is easier when it is cold. At least my food didn’t go to waste and rot because my fridge goes off for days on end.

That morning, me and the people I live with in this yard were sitting outside and talking. We were talking about voting. Everyone had voted. We chatted about change; who we voted for. Mainly we spoke about poor services. Will someone new fix Eskom? Will they fix the water? Our sewage leaks and children live in this unhealthy place. Will that be sorted?

None of us enjoyed winter in Orlando because the electricity was off so often.

Now the lights were off again and everyone was angry.  People said if they knew that power woull be taken after voting, they wouldn’t have voted at all. We felt cheated. The politicians tell us everything will be different afterwards. Vote! But only three days after we cast our vote the electricity was off again.

“Does the ANC care at all?’ someone asked. “They are starving us.”

My friend Bafo looked at me. He is a tall Venda man who speaks perfect Zulu. He has a small business, a car wash. He is also an electrician who helps with wiring and fixing things.

“You see, these politicians wanted us to vote for them. But the power is gone already. So if you are going to get groceries don’t buy lots of food because it will end in the rubbish bin,” he warned.

I told him we mustn’t lose hope. Maybe, just maybe, things were going to get better.

So that day I left the yard, picked up my shopping bags and went to Bara Mall to get some groceries. I bought some vegetables, chicken, milk and a few other things I needed. I saw people on their way back. The mood felt like Christmas. All the pre-Christmas sales and specials were being advertised. People talked excitedly about where the best food deals were. Fridges needed to be filled for families to feed their children.

My other neighbours in the yard are Mr and Mrs Gezani and their two kids. Mr Gezani is working at a metal company as an assistant welder. He’s not getting paid much but the money helps a lot to pay for rent and food. He is 45 years old. A friendly guy. He sometimes knocks at my door and gives me food.

“Wena uwumfowethu ngeke ngidle wena ungadli (You are my brother I won’t eat while you are not eating)”, he says.

The power was still off.

Mrs Gezani works as a cleaner. She likes to collect food pamphlets and check for low price specials. I was standing outside and she opened her door and said to me “Hey Tshaba, look what I have to do.” She had a large plastic bag filled with chicken and rotten vegetables. “I hate to do this. But I have to throw this out – it’s rotten since the fridge is off. This chicken now is rubbish.” She was so angry.

The landlady, I call her Magogo, is 70 years old and lives on her Sassa grant. She has high bloods. She is good sometimes but crazy sometimes too. She can be kind but other days she tells us we can take our things and go!

On days when there is no electricity, like us, she is crying because of her own food. She loves pork. “Now I have to throw away my pork meat,” she cries. She says winter is better than summer. In winter it’s cold and we don’t have to throw away food.

“I won’t vote for the ANC anymore. Never in hell,” she cries.

Mrs Gezane’s daughter is writing matric and trying to study. She told me: “I am in Grade 12 and I have to study but there is no electricity. I can’t study during the day because everyone is around. We are living in one room so it’s better to study at night when everyone is sleeping. But now I can’t.”

Mr Gezani said when power was off crime was high. He told me they are getting robbed in the morning when they go to catch taxis. Another neighbour told me a lady was robbed of her cell phone and when she screamed for help the tsotsi was long gone in the dark.

On the 8 November I woke up and opened the fridge. It smelt like hell. I had stocked up with fish, chicken feet and livers, lots of vegetables and two litres of milk, butter and eggs. The chicken was definitely off. The fish was also rotten. I had to throw them out. Everything had gone to waste.

I was praying for power to come back. I had potatoes and cabbage that I could cook on my paraffin stove. Paraffin costs R19 a litre. I needed three litres. So, to save money, I used it only to cook and bathed in cold water.

I’m not the only one. The others in my yard started to cook on fire at the back of the house. They didn’t have money to buy paraffin.

On the street the smell was getting worse; rubbish cans were filled with rotten food.

Some people were taking their bins to open fields because they said they couldn’t stand the smell outside if bins were filled with rotten meat.

The electricity stayed off for more days.

During this time people in the community reached out to Councillor Brenda Happy Damme. She only said: “Tomorrow. Tomorrow the power will be back.”

Every day someone went and reported back to us. “It will be tomorrow. 10am,” she repeated. But nothing happened.

On 12 November there was a follow-up meeting with Councillor Brenda.  She told the community: “Don’t ask me, I am not Eskom.” There was nothing she could do, but she would try her best.

What kind of answer is that? Is that the leader we voted for?

People were as angry as hell. They took to the streets and closed the roads with stones. Cars couldn’t get through. “Don’t ask me, I am not Eskom.” People came back so angry. They burnt tyres and rubbish in the street.  Streets were closed.

The power came back at 9pm. By then I had already thrown all my food in the rubbish can. It cost me R600.

At the time of writing this story the power has been out again. We have been without power for five days so far. I have been storing some food at my aunt’s place in Diepkloof. I also try to charge my laptop and phone there. I need my phone to keep my work, so I walk or take a taxi there everyday.

I am always on the lookout for people to help me charge my phone and laptop.

Why must we beg for service delivery? It’s our right to be serviced! Government should be working for us.  When the power goes off we lose food. I have also lost hope.

The promises we got from politicians were just to hoodwink us to vote. I know the government won’t help me now. DM/MC – Co-written with Harriet Perlman