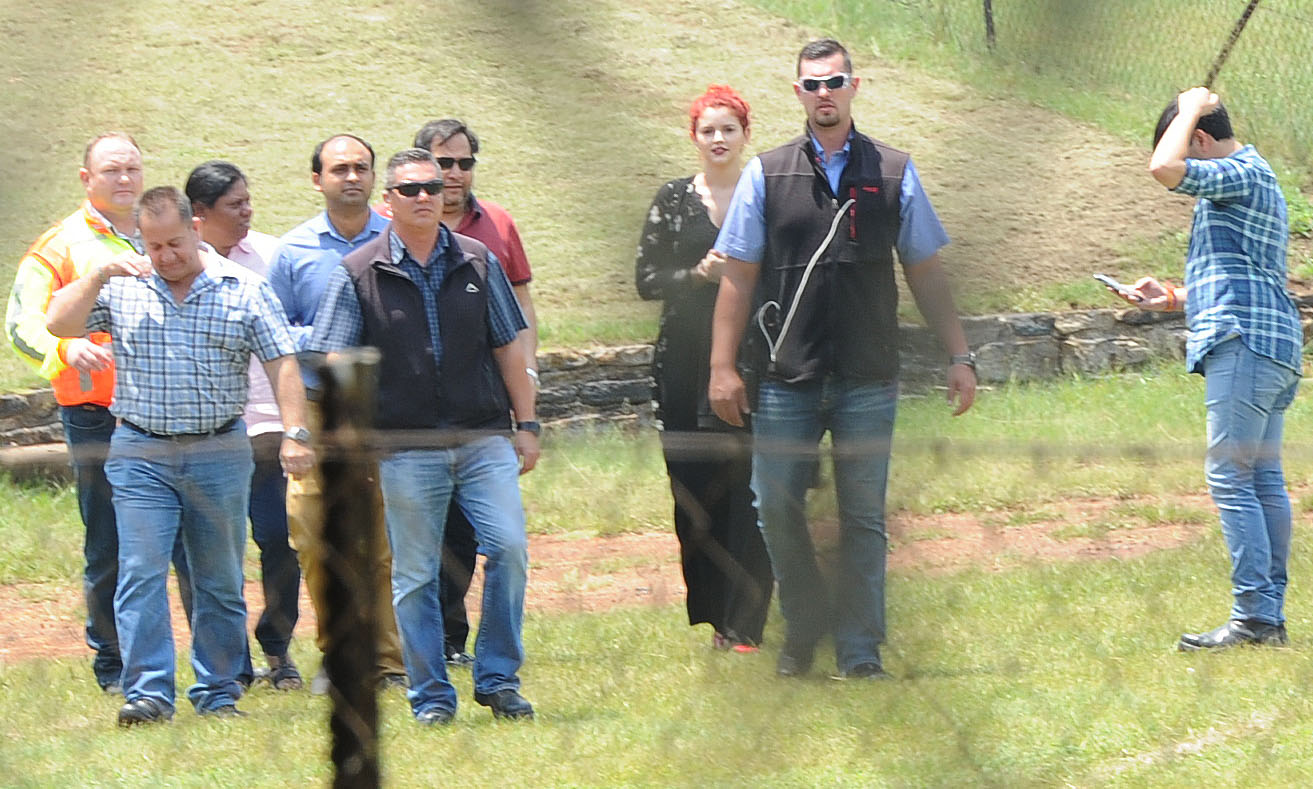 Ajay Gupta (in the red shirt and sunglasses) and Ronica Ragavan (in the pink shirt) at Optimum Coal Mine on 7 February 2018 in Middelburg, Mpumalanga. (Photo: Gallo Images / Rapport / Elizabeth Sejake)

The Gupta-owned Tegeta Exploration and Resources has managed to temporarily block business rescue practitioners from convening a creditors’ meeting aimed at adopting a business rescue plan for Optimum Coal Terminal.

The Gupta enterprise has won an interim high court interdict to block a vital meeting aimed at putting a business rescue plan for Optimum Coal Terminal (OCT) to a vote.

The order, handed down last week, prevents joint business rescue practitioners Juanito Damons and Kurt Knoop from calling or presiding over a Section 151 (1) meeting of creditors.

This is pending the outcome of a second part of the court application to settle a dispute over who may vote on the plan — either the business rescue practitioners or the directors of Tegeta Exploration and Resources.

Tegeta owns OCT, which has, as its only asset, a lucrative stake in the Richards Bay Coal Terminal. It is argued that a failure to adopt the OCT plan could sink an approved business rescue plan in respect of Optimum Coal Mine (OCM) — and thereby affect plans for Liberty Coal to acquire the mine in terms of a debt-to-equity deal.

A key part of this debt-to-equity deal is that it provides for a multibillion-rand Eskom claim.

Ragavan is out on bail of R10,000 following her court appearance on fraud and money laundering charges in September. This is the same criminal case that triggered arrest warrants — and an application for Interpol Red Notices by South African law enforcement — for her former bosses Atul and Rajesh Gupta and their wives, Chetali and Arti.

Court papers state that the affidavit of Nath, the subject of an Interpol Red Notice, is unsigned because he is in India and the application was rushed over the Diwali period.

Both OCT and Tegeta are among eight Gupta-owned companies that were placed into voluntary business rescue in February 2018 following a decision by South Africa’s major banks to terminate their accounts.

OCT is part of a lucrative trio of assets, including Optimum Coal Mine.

According to Ragavan’s affidavit, filed for the interdict application, Tegeta is one of four creditors of OCT and has a R40-million claim. She says the parties were, allegedly at short notice, served with notice of a creditors’ meeting that was to be held on 10 November 2021.

The meeting was scheduled so affected parties could vote on a business rescue plan for OCT.

This has resulted in a dispute which Ragavan says ought to be settled first as the creditors of Tegeta have not, as yet, adopted a business rescue plan for that company either. And without this, Ragavan says, Tegeta would have no “mandate” upon which to execute a vote at the OCT meeting and would thereby be prejudiced. She said there was no rush as both companies have been in business rescue “for years” anyway.

Ragavan provided the court with a breakdown of the ownership structure, with the Guptas’ flagship, Oakbay Investments (not in business rescue), owning a 29% stake in Tegeta. Tegeta in turn owns 100% of OCT, OCM and Koornfontein.

Ragavan accused rescue practitioners of OCT of having published a “purported” rescue plan on October 26 2021; one that she claims was drawn up with the obvious aim of benefiting Liberty Coal. (Ragavan provided no further detail.)

Liberty Coal is poised to take over ownership of Optimum Coal Mine in terms of a controversial debt-to-equity deal. The Competition Commission granted unconditional approval for the deal two months ago and more recently Liberty also obtained Section 11 permission from the Department of Mineral Resources for transfer of the mining rights.

Read more about Liberty Coal here: Liquidation and litigation woes: A strike at the heart…

Ragavan says in terms of the proposed business rescue plan, OCT has four creditors with proportional voting rights, and they include RBTC with 59%, Tegeta with 26.7% and Transnet Freight Rail with an alleged disputed claim of just over R20-million and voting rights of 13.29%.

She believes that Tegeta, while not the largest creditor, would have veto rights and therefore the company seeks a declarator that the directors should vote on the OCT plan and not the rescue practitioners. This part of the application is yet to be heard.