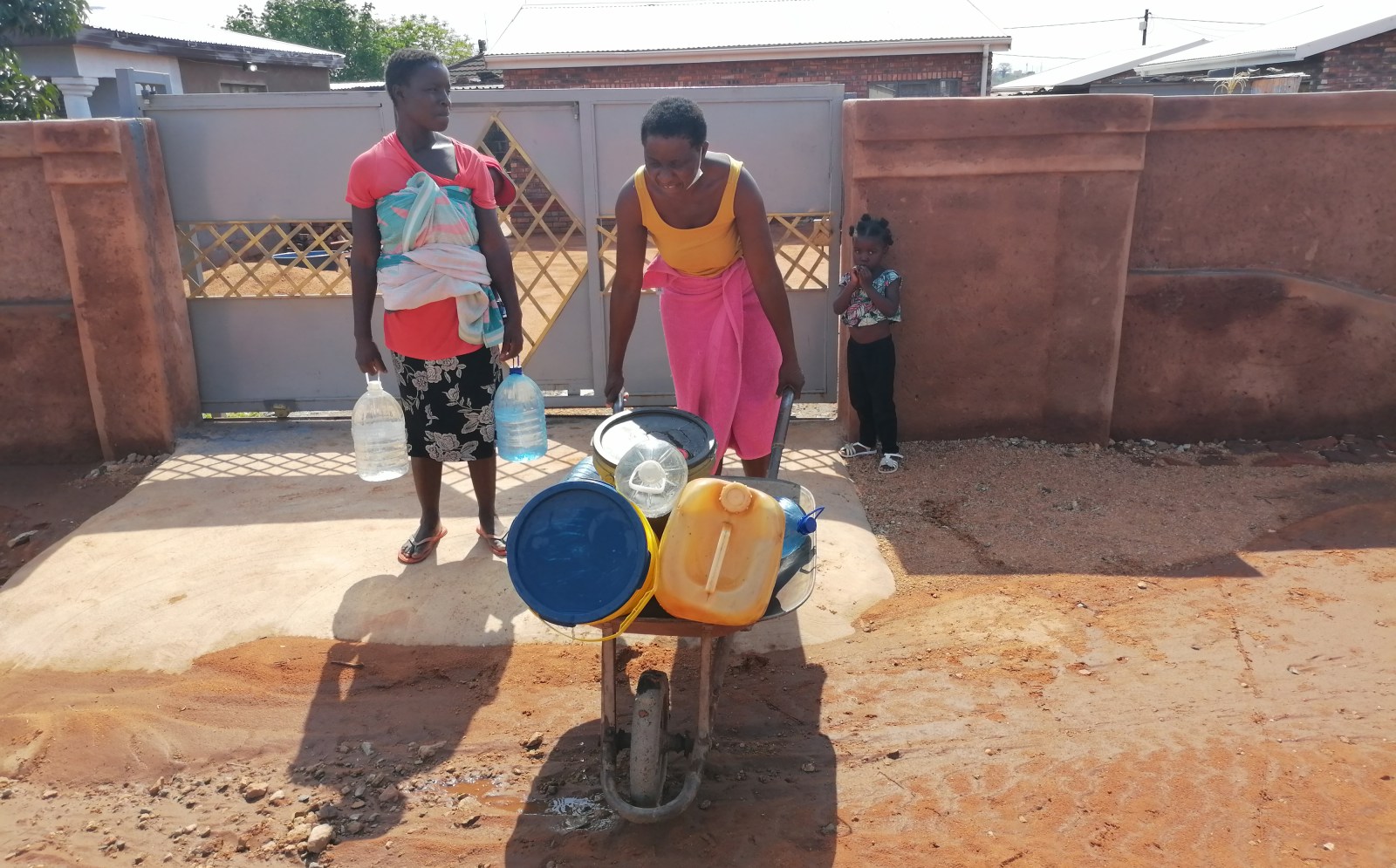 Musina resident Makie Nevhulaudzi and a relative return from collecting water with a wheelbarrow a few kilometres from her home. She made this trip daily for two weeks while the area’s water was switched off. (Photo: Bernard Chiguvare)

Inhabitants of the Limpopo town and surrounding areas frequently have to walk to neighbouring townships to access services like running water.

For the past two weeks, Makie Nevhulaudzi, has woken up at 4am daily to make a round trip with a 100-litre container in a wheelbarrow to a relative’s home where she fills the container with water.

The round trip to her relative’s house in Matwale Extension 9 is about a four-kilometre walk. Nevhulaudzi, like many other residents of Extension 14, near Musina in northern Limpopo, has to do this because of the inconsistent water supply to their RDP homes.

While the water was restored last Friday, residents are sceptical and say it is a matter of time before their taps run dry yet again.

Residents now want the municipality to drill boreholes and install large tanks as an alternative for when water supplies run out.

In 2019, we reported on complaints by residents that some of the RDP houses in Phase 2 of Extension 14, a few kilometres east of Musina, had never been connected to the electricity or water supplies.

At the time, the Musina Local Municipality told GroundUp that the delay to connect the homes was due to funds from the Department of Energy which were due to be transferred by June 2020.

Last month, Matwale residents joined other communities who protested outside the Musina Municipality over months of daily water outages and a lack of water tankers. Protesters also objected to the municipality cutting off electricity when people default on water bills.

When we visited Matwale again last week, Nevhulaudzi and other residents were seen collecting rainwater in buckets lined outside homes in order to at least flush their toilets.

“I have to do my laundry today as I managed to collect a reasonable amount of water. We can also use the toilet now. We spent most of the day outside because of the stench from our bathrooms,” said resident Naomi Mafungo.

Mafungo and about 20 others she lives with often buy water from people in the neighbouring Harper township who have boreholes. They make about seven trips per day and either transport the water using wheelbarrows or carry the containers on their heads.

Julia Mashava, who joined the protest outside the municipality last month said, “Among the demands was for constant water supply but we have not seen any change. There are no water tanks from the municipality.”

In October, the Vhembe District Municipality said that 19 of the 36 boreholes in Musina were out of action.

We sent questions to the municipality last week over complaints raised by residents but did not get a response by the time of publication. Calls to spokesperson Matodzi Ralushai also went unanswered. DM