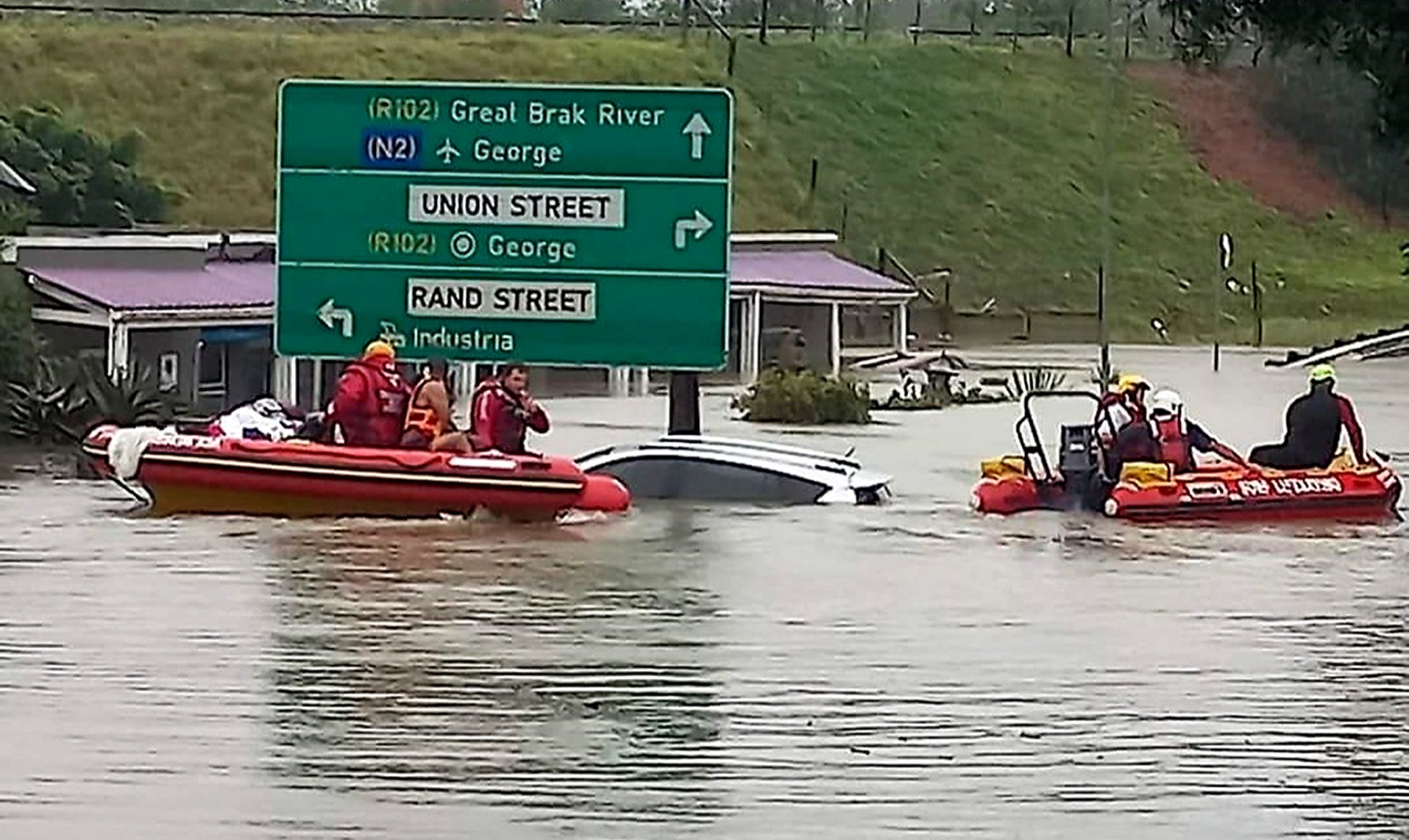 Flooding in George, along the Garden Route on 22 November 2021. (Photo: FirstCare Wildlife Support)

The George Municipality asked residents to use water for essential purposes only as two consecutive bursts in a raw water supply pipe saw the town’s water supply dwindle to critical.

An early morning cloudburst in George saw as much as 110mm of rain falling in a single hour, causing damage to homes, the closure of hospitals and clinics, the evacuation of people, flash flooding and traffic chaos.

The latest available rainfall figures for the area by Monday afternoon were 106mm in George, 144.6mm at Witfontein, 63.6mm at Knysna and 108mm in Robertson’s Pass near Mossel Bay.

The Minister of Local Government, Environmental Affairs and Development Planning, Anton Bredell, urged people living and travelling in affected regions to be aware of the weather conditions and to limit travelling and being outdoors as much as possible.

Fake news circulated that an aircraft had crashed at the George airport, but this was disproved.

In George, the weather moved the inaugural town council meeting to later in the day.

The South African Weather Service had issued a flood alert for the area over the weekend as heavy thunderstorms and rain were predicted for the Garden Route.

“We are aware of severe localised flooding, strong running water and difficult driving conditions across the region, with George particularly impacted,” Bredell said on Monday morning.

“Several clinics have been affected and there are reports of some localised flooding at the George Mediclinic, which is being attended to. Driving may be particularly hazardous on the rural gravel roads. If possible, stay indoors and off the roads and avoid crossing rivers and swollen streams.”

The George Municipality asked residents on Monday afternoon to use water for essential purposes only as two consecutive bursts in a raw water supply pipe saw the town’s water supply dwindle to critical.

The municipality said the pipe burst was linked to the flash flood and had led to two of the town’s reservoirs becoming depleted.

Despite the flooding and the heavy rain, suburbs on the eastern part of town, George South and the central business district ran out of water, as did Thembalethu, Rosedale and a part of Pacaltsdorp.

The Go George bus service was suspended for a few hours but resumed when roads became safer.

Humanitarian organisation Gift of the Givers was quick to respond with assistance. The organisation’s founder, Dr Imtiaz Sooliman, said they had prepared a major intervention for communities in George as well as Oudtshoorn, Mossel Bay, Bitou, Kannaland, Hessequa and Knysna.

The organisation will run its operation from the SAPS Eden Cluster Base in Heatherlands.

“Gift of the Givers have made arrangements to bring in helicopters and our aquatic teams if water rescue is required. Hot meals will be provided on site,” Sooliman said.

The Joint Operations Committee of the Garden Route municipalities said all was under control by around 4pm.

In Mossel Bay a school bus got stuck for two hours and there was surface damage to roads. Sandbags were used to protect some properties.

In George, the flash flooding led to the closure of seven schools. The emergency room of the Mediclinic George flooded and a number of clinics had to close. The Protea Park clinic and the George Provincial Hospital were later reopened after clean-up operations.

A diesel locomotive got stuck on the Bosendal tracks because of flood damage.

The residents of two homes in George were evacuated. In Pacaltsdorp 27 people were taken to the community hall, while seven people were rescued in Thembalethu.

There was no major flooding in Oudtshoorn, although some residents from the Cango Old Age Home asked to be evacuated, according to the report. Low-lying bridges were closed but the scenic Meiringspoort remained open.

Garth Sampson from SA Weather said the drought-stricken Nelson Mandela Bay and adjacent Kouga Municipality could expect some good rain “but no flooding”.

He said that after November until April the chance of the area receiving significant rainfall was much lower.

By 2pm, Sampson said 32.6mm had been measured in Kareedouw, which was good news as this is one of the major catchment areas for Nelson Mandela Bay’s dams. DM/MC