The weird and ghostly light in the dining room 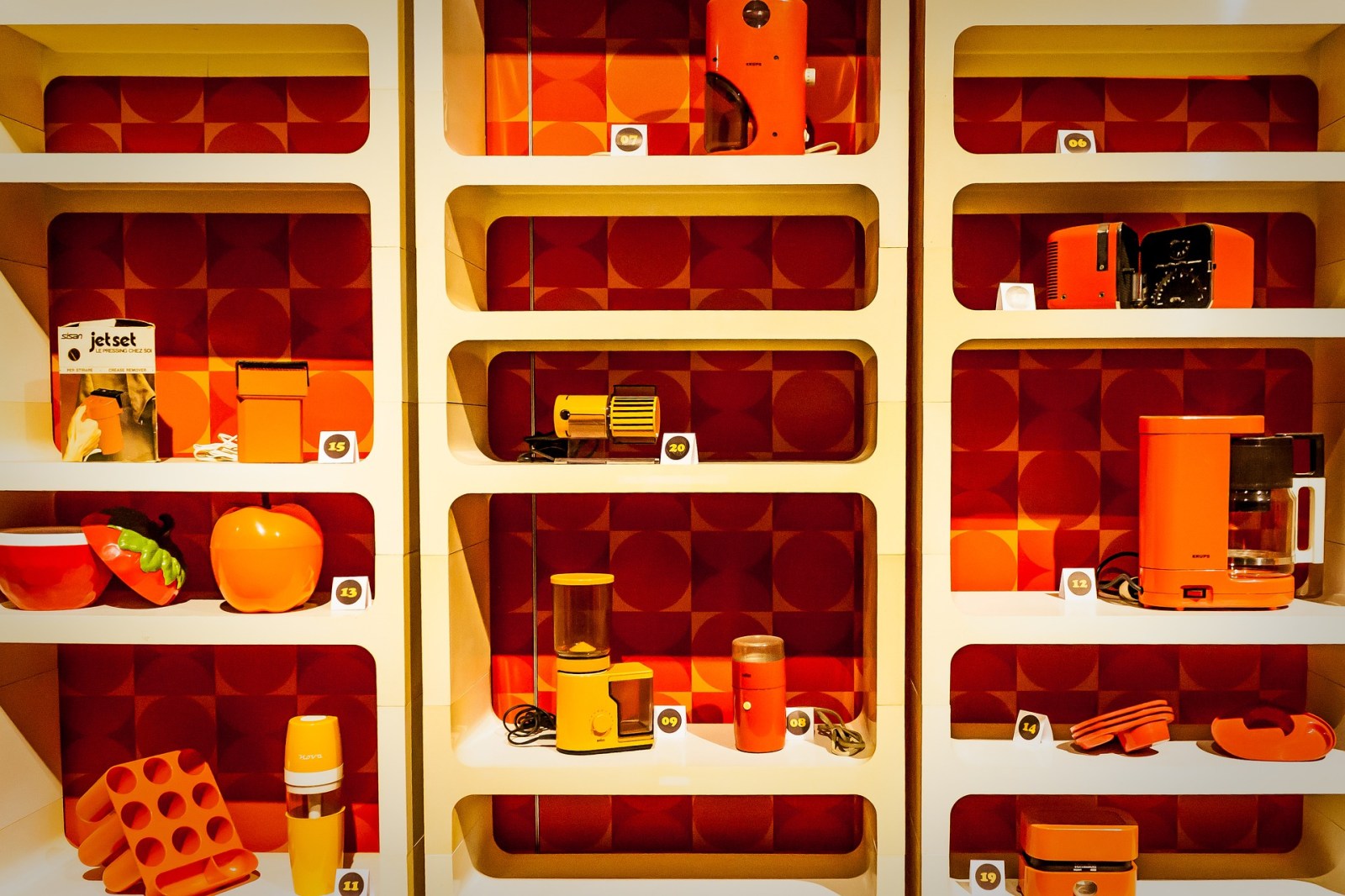 (The Foodie’s Wife remembers the simpler, and dare one add oranger, times of the Seventies fondly. Image of a generic Seventies style kitchen shelf from the Atomium in Brussels, by ptrabattoni on Pixabay)

When the dining room is on fire, you can’t find the fire extinguisher because it has slipped behind the biltong maker and your old, much loved electric frying pan is now a plant holder, you know you are married to a Foodie.

My life has become one of many appliances. Correction, new appliances. Often I am not told they are entering my home because there is a sort of cult around these things. Foodies conspire to find new ways to cook and all of these inspirations require complicated devices to prepare, smoke, sous vide or vacuum pack. The days of a pot over a fire (despite Eskom’s best efforts), or drying meat in the sun to add to its travel life, are gone. Cooking is no longer just an art, it has entered the realm of science.

Recently I got up in the middle of the night to find out why the cat was growling at the dining room door. A weird and ghostly light was emanating from the room and appeared to be flickering. Fire, the dining room was on fire.

I know we keep a small fire extinguisher tucked away there but it was no longer in its place.

Yelling fire! fire! to the other human in the house, who was oblivious to the crisis, I rushed to the kitchen for a bucket of water and flung it in the direction of the blaze. I turned on the light to see the damage – it was one of those rare moments when an Eskom grid was working and our power had not been rerouted to Zambia or Saxonwold – to discover that I had soaked a large cardboard box lit from underneath by a strange light.

The box was standing on a chair, underneath of which I discovered the extinguisher. What the cat was growling at was the tantalising smell of biltong drying in the box – hence the weirdly glowing light.

Of course I didn’t know it was there. The Foodie rightly decided that I might not relish the thought of raw meat, um, processing in a corner on one of my dining room chairs.

When The Foodie emerged it was to display righteous indignation at the possible ruination of the box. The cat and I were on our own.

I was born in 1950. I share this fact because back then to have one fridge gleaming in the corner of a very Formica-coated kitchen was a source of pride. A stove that was not an AGA – how times change – was a triumph and the pop-up toaster had yet to make an appearance. Gleaming aluminium pots adorned a shelf until those too got a bad rep.

We now have five fridges. Granted, one is a freezer, a large appliance that also finds itself in the dining room, the only room that could take a beast that size. It is fair to say it was ordered online and sight unseen. I envisaged a small chest that could grace a corner of our study with an Indian cloth thrown over it. The idea was to buy in bulk and freeze. This made particular sense during the early days of the Covid crisis.

We were not absolutely sure if it was legal to buy a freezer at that stage of the lockdown, but the supplier was happy to transport it. “Just say it’s a computer, that’s allowed,” a friend advised.

When it arrived on the back of a truck I went into shock. A computer that size cannot be seen outside of the Smithsonian Institution today. Seriously, you can stand two large sheep upright in the damn thing, let alone bulk buy.

It now stands there, large and white. There is no disguising it. A large bale of sari cloth could not cover it, let alone a colourful Indian throw. Even with scatter cushions. At a dinner party the other day somebody asked why we had an altar in the dining room.

I have a lovely ancient Salton hot tray. It is a gorgeous old thing and the sight of it pleases me because it is homey and well used. And yes it still works. Or it would if it didn’t have a vacuum packing device on top of it and R2D2 from Star Wars keeping it company.

These are two devices that also arrived mysteriously. The robotic creature is in fact an Instant Pot, a craze that is sweeping the culinary world at the moment. Granted, it makes wonderful air fried calamari but its presence unnerves me. It reminds me that one day we will all be replaced with devices in much the same way that, to a cat, you are just a can opener.

In the early Seventies, I acquired an electric frying pan. It was supposed to be a labour and electricity saver and this one came in spectacular burnt orange, tres chic.

Along with the fondue pot in the same colour, it gave me serious kitchen cachet.

I kept that electric frying pan through multiple house moves and kitchen transformations but one day it mysteriously disappeared.

“I think you will like this,” The Foodie announced with great glee, guiding me out to the braai area. “I know how fond you are of your frying pan and I thought of a way of giving it new life.”

There it was, between the strelitzia and the hollyhocks, planted out with hardy geraniums.

I am pretty sure that the very expensive Italian deep fryer, once also the rage, is now sunk into the succulent garden.

I draw the line at anyone reconditioning my slow cooker, but the pasta maker, the smoker and the Jamie Oliver sauce and dressing shaker are living on borrowed time. They have joined the collection of weird grinders, blenders and mashers that keep the ice cream making machine company at the back of a large kitchen cupboard.

The Foodie does not know it but I hide my ancient bread baking tins in the tumble drier, an appliance he does not know exists, lest they become containers for tomato seedlings, the growing of which is also a current obsession.

Foodies seem to need the latest model, the coming thing. I am mindful of this and try to make myself useful and presentable.

If I disappear, you might find me sunk under the bougainvillea, pushing up daisies alongside my treasured wooden spoon. DM/TGIFood