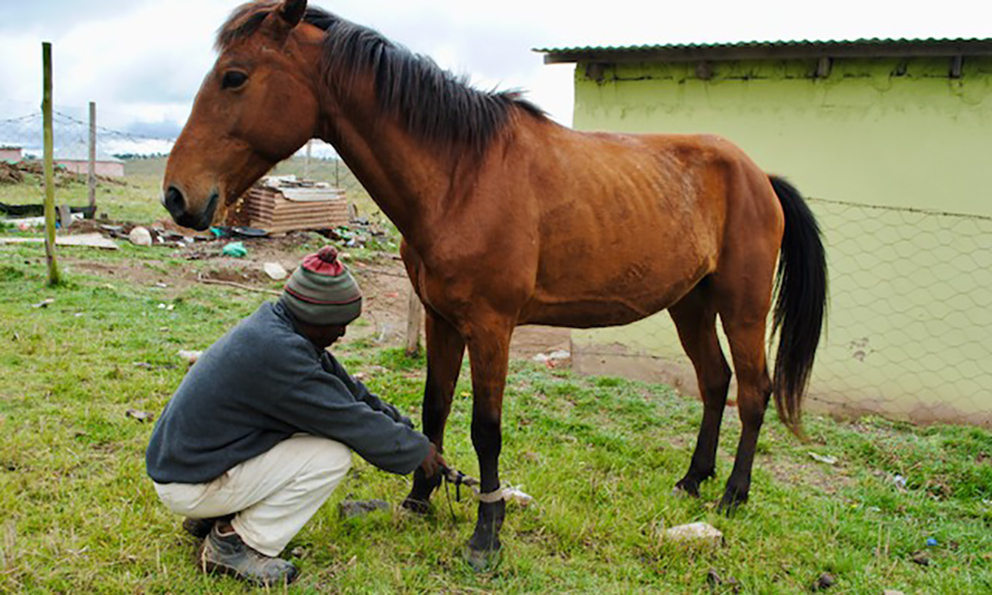 Thanduxolo Ketelo ties the front legs of his horse to keep it from straying far. (Photo: Mkhuseli Sizani)

Horse owners in Mthatha say they need government help to support their livelihoods and their animals. They face shrinking grazing land due to the encroachment of both new formal and unplanned informal settlements. Horses are often attacked by residents and livestock thieves steal horses to use them in rustling.

A significant problem is the struggle to access veterinary services, especially since most male horses are castrated. Horse owners also say they were left out of government’s drought relief aid to farmers. But the Department of Rural Development and Agrarian Reform says it has to prioritise stock farmers for food production.

According to the department, horses are commonly used by livestock owners to track their animals and as a mode of transport in the Qumbu, Tsolo, Centane and Qonce areas. There is also the annual traditional horse racing event known as Berlin November in Qonce (formerly King Williamstown).

Veterinarian Tinashe Chimatira, from the Animal Anti Cruelty League in Gqeberha, who worked from 2009 to 2020 between Mthatha and Port St Johns, says horse owners in the area get no support and he does not blame them for the often poor condition of their animals.

“Horse owners lack training on how to look after their animals … Our people love these animals because they have been part of their lives,” said Chimatira.

“The horse owners don’t even get medication and dipping. They also don’t get the vaccines if there is an outbreak of disease. There is not even a drought relief for them.”

He said there is a severe shortage of state vets and he used to help farmers with castrating their horses on his own time.

Sakhele Ketelo, from Zimbane Village, said, “These animals have been part of our lives from one generation to another. My grandfather used to have horses and he used them to plant his gardens, and for transport.”

He said owners depend on a non-profit horse rescue centre in Ncambedlana (which also contracted Chimatira) for help when their horses are sick or injured. He said they desperately need a state vet who can visit the villages.

Ketelo’s relative, Thanduxolo Ketelo, said, “Horses are my bread and butter. I raised my eight children and financed their studies through the money I generated by selling them. I can exchange one horse for ten sheep. If the horse is good and can compete in races, I can exchange it for 25 sheep.”

He said horse owners suffer a lot of stock theft and horses are also attacked.

“In the last three years, seven of my horses have been stolen, and some of them were pregnant. Now I am only left with five horses,” said Thanduxolo.

He has to hobble his horses to keep them close and it isn’t good for the horses.

He said medication is expensive and they need government support.

“In the past, we had 12 grazing camps and our horses were living peacefully but the development of new settlements destroyed that,” said Bayanda Lumkwana.

He said four of his six horses were stolen, two of which were pregnant. “My foal was stolen in February this year. That was a painful and great loss for me. To buy a horse here in the village it costs between R7,000 and R8,000.

“In 2019, I found two of my stolen horses in Tsolo [about 50km from Mthatha] … Often you find horses loitering next to the road because the thieves just dump them after using them for stock theft.”

Masiza Mazizi, provincial spokesperson for the agriculture department, said production farmers remain a priority due to food shortages. He said in 2017, 20% of South African households had inadequate access to food. Fencing off crops from grazing was part of that fight for food security, he said.

In terms of disease control, he said the department “conducts awareness campaigns” around common horse diseases and parasites.

“To improve delivery of veterinary services, the department in partnership with the national Department of Agriculture, Land Reform and Rural Development has introduced a year’s compulsory community service for vets after graduating … [and] a bursary scheme for veterinary studies to ensure that vacancies are filled.”

He said during the current year, the department had filled eight of 11 posts for vets and is busy finalising the remainder as wells as 55 posts for “animal health technicians”.

But, says Janine Clarke, of Barnyard Stables, who runs the Mthatha Horse Rehabilitation & Rescue Centre at Ncambedlana, “Government simply doesn’t care about supporting horses. There are no vaccines and drought relief for them.

“For 21 years I have been running this clinic through donations and from donations from our Facebook friends. I opened it because I am passionate about horses and their welfare. There is too much cruelty against these animals here.”

She said most owners are pensioners and unemployed people with very limited means.

She said she sees thousands of cases of horses in need of help, from as far afield as Butterworth, Maclear, Libode, Ngqeleni, Mqanduli and Mount Frere. “On Saturdays, we don’t treat fewer than 200 horses,” she said.

She said they see horses stabbed and with gunshot wounds, and sores because they are ridden without saddles.

“Due to a lack of fenced grazing camps, owners assault them when the horses stamp in their gardens. In Mphindweni Village near the Mthatha Dam about 30 horses have one eye because of stabbing by garden owners,” said Clarke.

Clarke said the SPCA doesn’t have the means to save horses, but instead has to put them down.

Saving horses is expensive and it involves significant amounts of money, she said.

The SPCA has not responded to our request for comment on the situation. DM