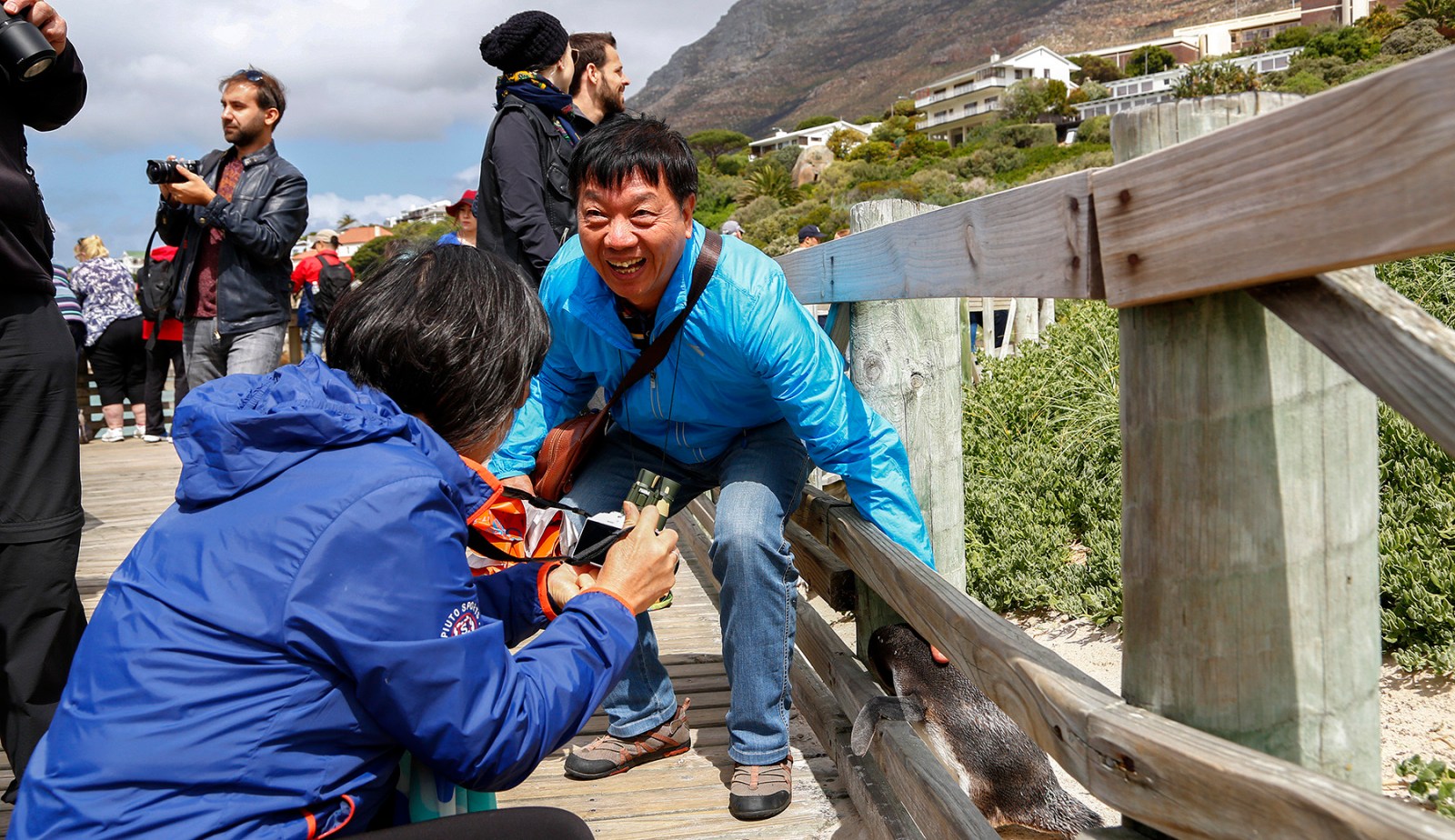 Researchers and local residents have raised concerns about visitors getting too close to the endangered African penguins that roam freely around Simon’s Town on the Cape peninsula.

If the hordes of tourists who descend every December on Boulders Beach in Simon’s Town are not conspicuous enough, their selfie-taking poses make them nearly impossible to miss.

A quick search on Instagram using the geotag “Boulders Beach penguin colony” reveals the vanity and sheer chutzpah of those determined to get themselves into the frame with an endangered African penguin. In many of these posts, visitors are very close to the birds – some are even reaching out as if to pet a penguin. Anything for the ’gram, right? Wrong!

Researchers and locals alike have raised concerns about the largely unregulated interaction with these wild animals, particularly over their moulting period which is also peak tourist season: November to January.

During this time, the birds stay ashore for up to 21 days to shed and regrow their protective feathers. This is when the birds are “more susceptible to disturbance, as they can’t access the water to escape as they are not waterproof at that time”, Dr Katrin Ludynia, research manager at the South African Foundation for the Conservation of Coastal Birds (Sanccob) told Our Burning Planet.

“Losing all their feathers and producing new ones while fasting for three weeks is a stressful time for the penguins. Having large numbers of tourists approaching during this time of the year adds to the stress,” Ludynia said.

The Boulders section of the Table Mountain National Park – about two hectares in size – was getting around 950,000 visitors a year pre-Covid, said SANParks regional communication manager Lauren Howard-Clayton.

While Howard-Clayton was unable to indicate how much foot traffic the park receives from November to January, she noted an increase in visitor numbers at “busier times of the year, including the festive period”.

According to Ludynia, the problem of people getting too close to these wild birds is an issue throughout the year, but is particularly noticeable over the peak holiday season.

“I think in most cases, it’s not done with bad intentions. It’s just people being curious. They’re a cute species, you know?” she said.

Ludynia blamed the selfie phenomenon and social media hype where people feel compelled to get up close and personal with wildlife.

“There is this idea that you can’t have been to Boulders if you don’t have a selfie of yourself sitting next to a penguin,” she said.

Echoing Ludynia’s remarks, local Simon’s Town resident, Lynda Silk, said the harassment diminished “since the tourists have been away, but you will see it again soon if you observe”.

Silk said she has also often seen children chasing the birds. “They mostly are simply excited to see the penguins and want to get close to them. Movies, especially the animated ones, give children a fondness for, but unrealistic understanding of, penguins. They don’t understand they are frightening the penguins when they get too close,” she said.

In response to questions about the proximity of humans to penguins in the park, Howard-Clayton said, “The welfare of African Penguins is an ongoing concern to SANParks. We encourage visitors not to approach the penguins, try to touch them or take selfies with them. They are wild animals and should be afforded space to move around the colony uninhibited.”

Something else Silk has observed is people unintentionally blocking the birds’ regular routes to and from the sea, causing them to get stressed.

“A couple of weeks ago, a grey juvenile broke a leg as people moved towards it. At that point, it tried to scurry back and fell into a deep ditch in between rocks,” said Silk, who arrived after the penguin had been injured.

“Penguins are not big in their expressions –they don’t yelp or roar. Their signals of fear or threat are often misunderstood,” she added.

Ludynia said a typical sign that a penguin is stressed is when it starts tilting its head to one side. “This is a sign that you’re too close.” Other signs are when they get up off their nests or start running, she said.

The Simon’s Town penguin colony, consisting of around 1,000 breeding pairs, is not confined within the park boundaries, and many pairs breed in the urban environment surrounding the reserve, said Ludynia.

City of Cape Town signage in the area surrounding the Boulders Beach section of the park indicates that people should keep a three-metre distance from the penguins at all times.

“We rely on people’s common sense and responsibility to maintain a respectful distance from the penguins. However, as the penguins move through these areas that are frequented by members of the public, it is often difficult to maintain that distance at all times. These areas outside the National Park are popular public beaches and are very busy during the season,” said City spokesperson Luthando Tyhalibongo.

Anyone found to be maliciously harassing a penguin could be fined or even prosecuted in terms of the Threatened or Protected Species Regulations, added Tyhalibongo.

Both Silk and Ludynia said the area surrounding the Boulders Beach section of the Table Mountain National Park is not penguin-friendly.

“We do have some problems with locals and their dogs. There are clear rules of dogs having to be on leashes, but that’s not always the case,” said Ludynia.

According to Tyhalibongo, dogs are not permitted on Seaforth Beach or Waters Edge Beach.

“They are, however, permitted down Kleintuin Road, along Willis Walk through to Burghers Walk, Windmill beach and Franks Bay, as long as they are kept on a leash and stay on the walkways or paths at all times.”

Traffic is another hazard faced by the penguins.

“We saw more penguin road kills during lockdown – it seemed like, because there was no traffic, people felt they could speed,” said Ludynia.

The City, together with Sanccob, have four penguin rangers who monitor the area outside the reserve throughout the year.

Tyhalibongo said the rangers – as well as contracted security staff who patrol the area – let people know when they are not complying with regulations or are harassing the penguins.

According to Ludynia, there is a need for more surveillance and monitoring inside the Boulders section of the reserve during peak season.

There are six SANParks rangers who monitor inside the reserve, and “there are more rangers deployed during the busier times of the year, including the festive period,” according to SANParks’ Howard-Clayton.

In addition to this, Howard-Clayton said there are also limitations on the number of visitors allowed on Boulders Beach, which are “determined by national Covid levels as well as tides in terms of beach space and availability, and are monitored by managers on duty and controlled via the access points to Boulders”.

The African penguin made the International Union for Conservation of Nature’s Red List of threatened species in 2010, classifying them as endangered. A population decline of 50% in 30 years warrants the species’ placement on this list, said Ludynia.

Researchers have seen an even greater decline in recent years.

“This year, we have the lowest-ever recorded penguin population. We have held that record for the last few years. But every year it gets worse,” said Ludynia.

Despite concerns of humans interacting inappropriately with the penguins, Ludynia said the Simon’s Town colony is the only one in South African that is “relatively stable”, whereas “all other colonies are declining dramatically”.

Unlike other African penguin colonies, the Simon’s Town colony is not in competition with fisheries because False Bay is closed to small pelagic fisheries – undeniably the main reason behind the colony’s relative stability, said Ludynia.

However, because the colony extends beyond the reserve, it remains important to “create a safer breeding space for the species in the surrounding urban environment” to prevent population numbers from diminishing at a faster rate, said Ludynia. DM