Zenay Jordaan returns at flyhalf for Bok Women against Wales 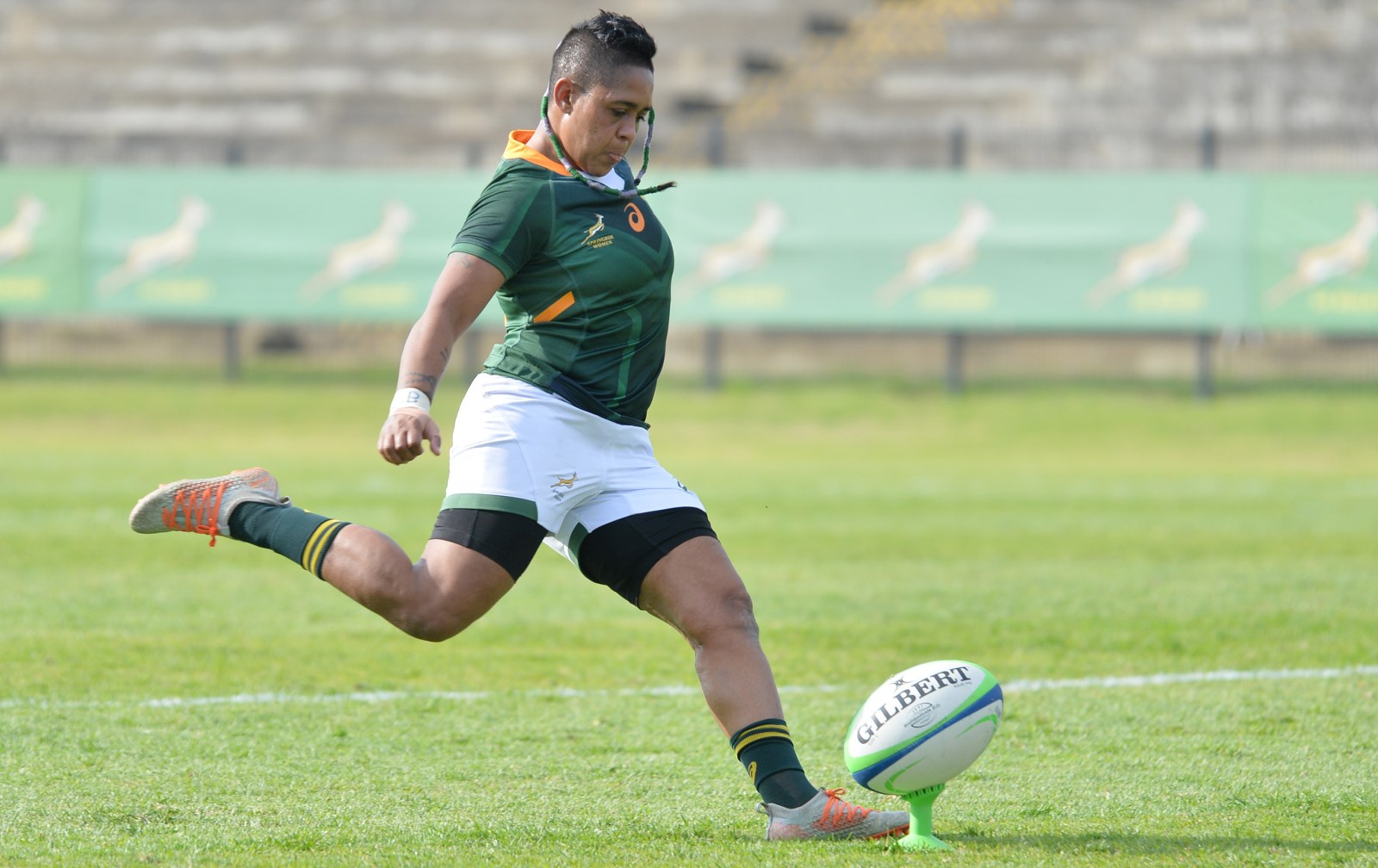 Zenay Jordaan of the Springbok Women in action during the second Test against Kenya at Danie Craven Stadium in Stellenbosch on 16 August 2021. (Photo: Grant Pitcher/Gallo Images)

The Springbok Women are hoping to push Wales in their second game of an historic northern hemisphere tour after suffering a heavy defeat to France last week.

The most experienced Springbok Women player on their European tour, Zenay Jordaan, will start at flyhalf against Wales on Saturday in the only change to the run-on team named by coach Stanley Raubenheimer.

Jordaan was not considered for the opening tour match against France in Vannes last Saturday due to a stomach bug. South Africa lost 46-3.

Jordaan has recovered and will don the No 10 jersey at Cardiff Arms Park, which is next door to the Principality Stadium, in her 29th Test appearance.

Jordaan’s selection sees Libbie Janse van Rensburg move to the bench, where Raubenheimer made some tweaks to the finishers in the game.

With Janse van Rensburg on the bench, Jakkie Cilliers sits out this week, while Lerato Makua and Simamkele Namba come in for Ziyanda Ngohlekana and Ayanda Malinga respectively, with the duo in line for their Test debuts.

Malinga, another Pretoria-based player, sits out owing to Head Injury Assessment protocols after a knock sustained against France. Namba, who scored eight tries in 10 matches for DHL Western Province in the Women’s Premier Division this year, will replace her as wing cover.

Raubenheimer said the selection of Jordaan was an easy one, due to her vast experience.

“I am happy to welcome Zenay back into the team as she has trained well and is on the same page with us now. Her presence will add value to our decision-making and execution,” he said.

“The coaching staff felt that the team did well against France, considering the low base we started from with regards to match practice and sharpness. This group will get another chance to show that the lessons learned from the Vannes match can deliver positive change to the mistakes that were made.”

For Raubenheimer, the Cardiff clash will be another important step in the squad’s preparation for the Rugby World Cup in New Zealand in 2022.

“We are up against another opponent ranked above us just seven days after playing France,” the coach said.

“We wanted to see at what intensity the French play and with that knowledge, we have a better idea what to expect from Wales. The two sides are more evenly matched than last week, so I believe we can create more opportunities for ourselves, so the challenge will be to make the most of those.”

The South African pack managed well against the well-drilled France team despite the lack of game time in recent years, as was the case with locks Nolusindiso Booi and Rights Mkhari.

Booi last played for the Springboks in November 2018 before sitting out many months due to a serious foot injury, and got through a ton of work in a commendable 80-minute effort, while Mkhari had to overcome a bad dose of Covid earlier this year, and missed out on the entire Women’s Premier Division and the two Tests against Kenya.

Mkhari last played in December 2019 when she donned the Springbok Women’s Sevens jersey at the HSBC Cape Town Sevens before being struck down twice during the pandemic.

“I had to start all over,” the 27-year-old from Limpopo said.

“It was really bad for me during the pandemic, and it was a long, hard road to get back to full fitness. To then play my first competitive game in such a long time against the formidable pack of France and feeling happy afterwards was a huge relief.

“We stood up well, I thought. We went into the game hoping to deliver a competitive performance and I think we managed that.”

Mkhari played in her fourth Test and said the experience was invaluable.

“There was a lot of catching up for me to do, but our coaches prepared us well,” she said.

“There were no real surprises coming from their pack. We managed to hold our own in the scrums and lineouts and we all felt afterwards that we were competitive throughout, especially given the lack of game time we had compared to them.”

That effort must now be sustained and Lindelwa Gwala, who played hooker against France, said the momentum needs to be carried over to Wales, their next opponent.

Gwala toured with the squad in 2018 when they last played Wales, losing 19-5.

“We had a lot of debutants in that pack that day,” recalled the KZN-raised Gwala, who has played in 11 of the 12 Test matches since that day.

“They came at us hard, especially that first scrum, and we have a score to settle.”

The 24-year-old Gwala shared Mkhari’s optimism following the French outing: “We managed to do what we set out to.”

“We were competitive in the scrums, won our lineouts and managed some good drives, which was satisfying. They have played a lot of rugby together and we have not; in fact, we hardly played any rugby recently, so this match was a good wake-up call to where we need to be.”

Gwala feels the team will bounce back quickly, having gained that experience: “We are in a better space already, having played that game and getting so much out of it.

“We will improve, no doubt, and come Wales, we are expecting another competitive performance. The game we played has helped so much, we will be a better team this weekend.”

Kick-off is at 2.15pm (South African time) and the match will be broadcast delayed live on SABC 2 at 7pm.