FW de Klerk (1936 – 2021): the last apartheid president was driven by pragmatism, not idealism 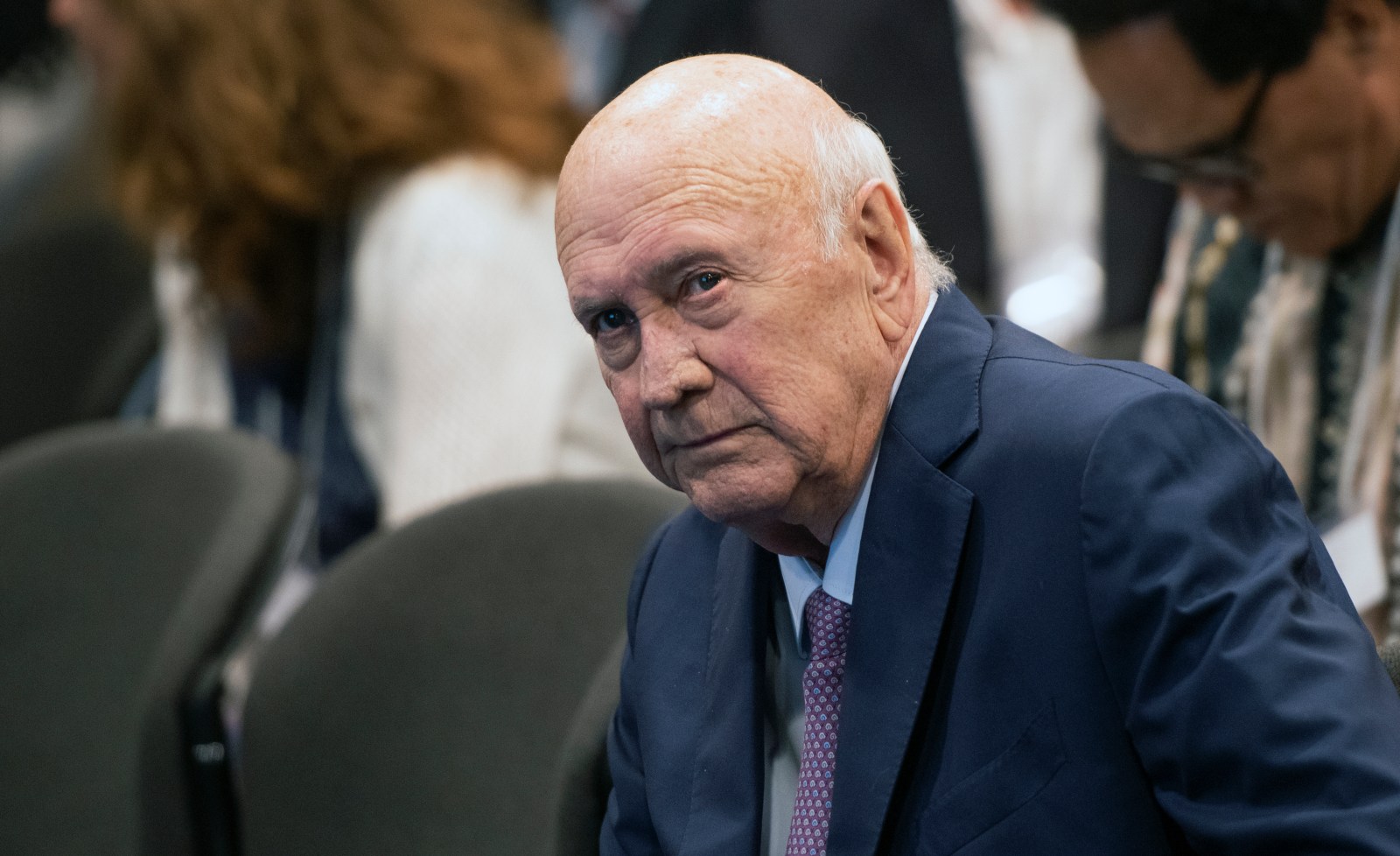 CAPE TOWN, SOUTH AFRICA - JANUARY 31: FW de Klerk and his wife Elita Georgiades at the FW de Klerk Foundation Conference at the Raddison Blue Hotel in Waterfront on January 31, 2020 in Cape Town, South Africa. The FW de Klerk Foundation yearly hosts a conference on February 2nd. This year the event falls on January 31st to coincide with the announcement in Parliament in 1990 of the release of Nelson Mandela and other prisoners and the unbanning of several organisations. Each year the conference tackles a topical theme, with input from a diverse range of influential speakers. Photo by Gallo Images/Brenton Geach)

Few recent historical figures in South Africa provoke more divergent views than Frederik Willem (FW) de Klerk. He was president of the country from 1989 to 1994. Some will remember him as the last white South African president who played a primary role in ending the brutal system of apartheid and preventing further bloodshed. But, many will remember him simply as the last white minority leader to preside over apartheid and the violence that upheld it.

In recognition of his role in the demise of the formal apartheid, De Klerk was awarded the Nobel Peace Prize in 1993. He received it alongside Nelson Mandela, who became South Africa’s first democratic era president a year later. Historians have pointed to the white minority’s unusual capitulation of power, especially when gauged against other settler societies. De Klerk arguably had an important hand in that.

But Mandela’s disparagement of De Klerk a few years prior as the “head of an illegitimate, discredited minority regime…incapable of upholding moral standards” captures not only the animosity between the two leaders, but the feelings of many if not most South Africans.

That De Klerk never saw himself and the National Party regime in that light, is paradoxically what enabled him to lead the party’s relinquishing of state power.

Not that he had set out to do that.

The end of the Cold War with the dismantling of the Berlin Wall in 1989 meant the loss of Soviet Union support for the anti-apartheid organisations. It also ended the West’s need of the apartheid regime as proxy in Africa.

Sanctions, the costs of military action in the southern African and an unabated popular insurrection pushed South Africa into an economic crisis.

Meanwhile, apartheid lost its hegemonic hold on Afrikaner intelligentsia, business, media and the churches as doubts grew about its morality and continued practicability.

De Klerk will be most remembered for his famous speech delivered on 2 February 1990 in which he announced the unbanning the African National Congress (ANC) and other liberation movements.

But it should not be read as a Damascene conversion to the principle of black majority rule.

Rather the announcement was made by De Klerk the pragmatist. He was taking a strategic risk to regain the initiative, in a situation where the options beyond intensified military repression were rapidly shrinking.

De Klerk seems an unlikely candidate to have led this process.

De Klerk was associated with the conservative wing of the National Party. He was active in Afrikaner nationalist organisations from a young age, before joining the apartheid parliament in the early 1970s.

De Klerk’s political career confirms his commitment to apartheid. After ascending to a National Party ministerial position in the late 1970s, he passed through portfolios instrumental in the domination of black people.

As minister of education between 1984 and 1989, he was the political principal responsible for the continuing implementation of “Bantu education”. This system was most devastating, enforcing the racial hierarchy through the limitation of black people’s life opportunities from an early age.

De Klerk clung to the view that apartheid was intended to address the complexity of South African diversity. In his statement before the Truth and Reconciliation Commission (TRC) in the late 1990s he protested the international assignation of apartheid as a crime against humanity in 1973. The Truth and Reconciliation Commission had been created to examine human rights abuses during the apartheid era.

He insisted before the Commission that crimes against humanity have to do with the “wilful extermination of hundreds of thousands – sometimes millions – of people” and that white people, in contrast, had increasingly shared state resources with black people in latter years of apartheid.

De Klerk’s position had not changed in 20 years, as evident in his 2020 public statement when he repeated this stance. But after an intervention by the Desmond and Leah Tutu Foundation, he backtracked a few days later and acknowledged the Rome Statute of the International Criminal Court’s definition of apartheid as a crime against humanity.

Nevertheless, his concession was ambiguous:

“This is not the time to quibble about the degrees of unacceptability of apartheid.”

De Klerk and the security forces

De Klerk’s denial of apartheid state violence partly sprang from his insistence that he was personally unaware of the abuses by its security forces. He was not part of the inner circle of his securocratic predecessor Pieter Willem (PW) Botha, who had created the repressive National Security Management System.

However, he was a member of the State Security Council, the structure at the pinnacle of the National Security Management System. As a result, the Commission found that:

“[His] statement that none of his colleagues in Cabinet, the State Security Council or Cabinet Committees had authorised assassination, murder or other gross violations of human rights was indefensible.”

During his presidency, political violence escalated to unseen levels. De Klerk undertook various actions to neutralise the securocrats, suggesting that a divide had by then opened up in the National Party government between those determined to sustain apartheid and those believing it could no longer continue unchanged.

But, the De Klerk grouping in the party certainly did not aim to establish the current constitutional democracy based on human dignity, equality and freedom. At the start of the multiparty negotiations the party was confident that it could continue with mere apartheid reformism called “power sharing”, as had been started by Botha in the 1980s.

Power sharing involved building a “white veto” into parliamentary representation, as a counterweight to the enfranchisement of the black majority. But intense political violence halted the negotiations, increasingly putting the possibilities for a political settlement at risk.

The creation of an alliance between white and black reactionaries in the Afrikaner-Volksfront, the Inkatha Freedom Party and the then nominally independent Bophuthatswana bantustan brought renewed urgency to finding common ground.

This quest was facilitated by scenario planning exercises that brought opponents together in social environments, contemplating South Africa’s possible futures. These built on a series of earlier meetings, as also initiated by the Botha regime with Mandela as a political prisoner as early as in 1984.

The unexpected personal dynamics of foes coming face to face collapsed the stereotype of the “black Communist terrorist” for the National Party negotiators. These interactions paved the way for the party and the ANC as the primary parties to build mutual understanding and eventually trust, especially between their respective lead negotiators, Cyril Ramaphosa and Roelf Meyer.

De Klerk and his negotiators were swept along by the momentum of events. They came to realise that a democracy in which a constitution with a bill of human rights is supreme, with equality before the law irrespective of “race”, would be as best a protection for their constituency as they could hope for.

Regarding economic transformation, the National Party and the white capital interests they represented failed to block a constitutional clause expressly providing for expropriation of property in the public interest. But, the clause included a rider that such expropriation should be subject to compensation. The clause also stipulates that “an equitable balance” should be struck between the interests of the public and the owner.

As a National Party loyalist De Klerk continued on Botha’s path of apartheid reformism, including through talks. But, unlike the strongman Botha, he was no securocrat. He came to believe that power sharing could not ultimately be imposed through state violence.

Where Botha had faltered, De Klerk was able to take alternative steps. As a conservative National Party leader, he could bring most of the party and its constituency with him. It was not a change of heart that drove De Klerk. He had entered into a perfect postcolonial storm, from where there was no return. DM/ML

Christi van der Westhuizen is an associate professor at the Centre for the Advancement of Non-Racialism and Democracy (CANRAD), Nelson Mandela University.