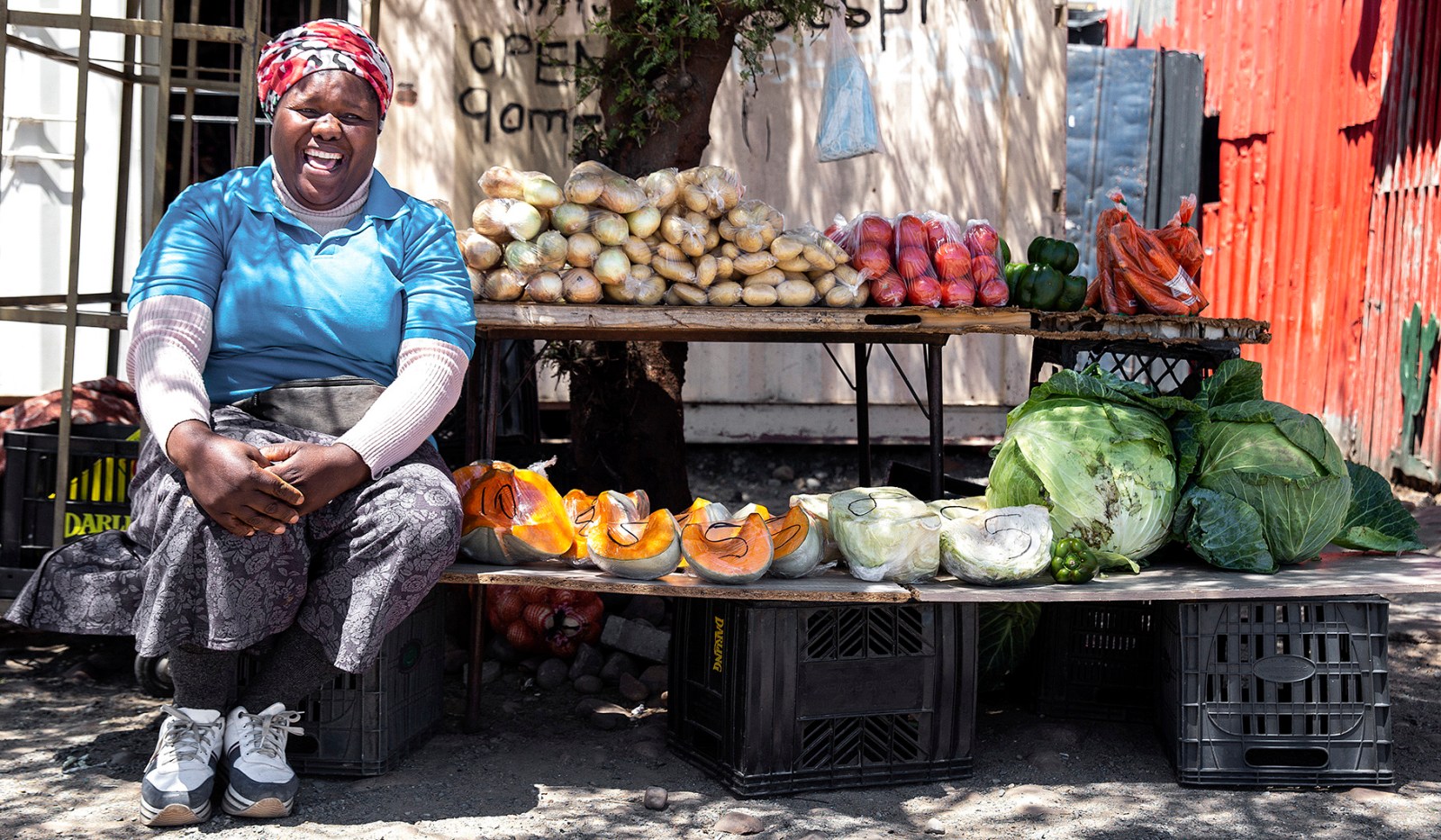 Monica Mrwashule at her food stall. She says her customers rely on sourcing the best prices from her and a nearby large retailer. (Photo: Ashraf Hendricks)

The temptation by government and the formal sector to create more ‘formal’ markets counters many of the strategic decisions that informal traders rely on in South Africa. Rather than pushing for formalisation, there is great potential to build on the success of small enterprises while making it easier, safer and better for them to grow as sustainable businesses.

‘Local is lekker” is one of my favourite South African expressions, but in recent months I’ve learnt that “local” isn’t a straightforward concept when it comes to food systems. Producing and consuming locally has clear benefits from a climate, social and economic perspective, but the Western Cape has critical limitations around water, seasonality and access to basic public services. These must be taken into account before jumping on the hyper-local food agenda.

These issues converge most visibly in public spaces, where stringent regulations and the physical environment often prevent local economies from thriving and where inequality, inadequate services, xenophobia and the prioritisation of large commercial interests are commonplace. Thinking of a food ecosystem requires a vision beyond the mechanical production or provision of food.

Indeed, like many small towns in the Western Cape, access to nutritious food in some communities in Worcester is precarious. Dr Jane Battersby from the Department of Environmental and Geographical Science at the University of Cape Town (UCT) explains that part of the challenge is the “seasonal employment that results from crop seasonality. Most people are dependent on wages and grants to ensure access to food. The limitation is not the availability of nutritious food, but the resources to access and use the food.”

She recalls a research interview with a group of women in Worcester where, when asked whether they thought they lived in a “food desert” replied that they lived in an “economic desert”. The truth is that these are two sides of the same coin.

In a recent visit to Zwelethemba, a township outside Worcester, we met Brenda Siko, who runs a local early childhood centre (ECD) and calls herself “lady boss” because of her deep engagement in the community. Brenda is a strong voice advocating for regulations that match her reality rather than applying the same rules designed for formalised environments.

Food is a key part of Brenda’s plea and illustrates the interconnectedness between private and public spaces, especially in informal settings. To supplement the food she needs for children at her centre, she has started a garden at her home. It’s a small attempt at meeting an enormous challenge. What she really wanted was access to municipal land to set up her centre and a larger piece of land to grow food, but for zoning reasons, her request was declined.

In reality, neither her small garden nor a larger plot will ever be sufficient to meet the nutrition needs of all the children in her centre. In fact, focusing on food gardens can be a counterproductive approach as it places the full responsibility on the individual grower and misses on larger forces at play.

Dr Gareth Haysom from the African Centre for Cities at UCT explains that we must guard against the seemingly low-hanging fruit (no pun intended), which might be attractive for politicians wanting to score points in communities, without a long-term strategy in place that sees the wider food system and its failings and avoids trying to intervene in the wrong place.

Nevertheless, making municipal land available to grow food would be a positive move in a place like Worcester, and there is certainly a growing demand. David Daniels, for instance, runs a local NGO called Woman of Hope that feeds nearly 500 people a day. He was granted a lease on an adjacent plot of land in Riverview and has started growing food to supplement the NGO’s community kitchen. He sees the modest space as an opportunity to train people to grow their own food and hopefully start their own gardens.

Professor Scott Drimie from StellenboschUniversity points to the critical role of public space in “unlocking a system that is appropriate for each community.” In the Breede Valley, commercial agriculture and its link to seasonal employment results in communities with unsteady incomes and increased pressure on the food system. He lists practical steps such as setting up more community kitchens as safety nets during winter when fewer people have work, protecting street vendors when rains intensify, and thinking about public services as a benefit to the system, rather than being simply focused on enforcement to ensure safety regulations are followed.

Aside from the small food gardens on municipal land or in people’s homes, the more conspicuous players that are largely ignored in official surveys are the street food sellers. Here Worcester is no exception. Monica Mrwashule has a pavement stall outside a formal retailer in Zwelethemba selling vegetables and other non-food items. She says most of her customers rely on both her shop and the retailer because she offers better prices on some of the produce.

Emilio Tinga sells eggs which he buys wholesale from Rainbow Chickens and sells from his small bakkie on the same corner. He says he goes through at least a box every day. Tinga also relies on a symbiosis between the larger retailer and other street vendors in the area.

On paper, sellers like Mrwashule and Tinga are working in what sounds like a centrally located market that benefits from busy foot traffic and a nearby taxi rank. However, the temptation by government and the formal sector to create more “formal” markets misses all the strategic decisions that sellers rely on. Rather than formalising what already works, there is an opportunity to build on the success of these small enterprises and make it easier, safer and better for them to grow.

A recent report by the Institute for Poverty, Land and Agrarian Studies (Plaas) at the University of the Western Cape gives practical advice on how to support these small-scale players across the entire food chain given the counterproductive policies that were implemented during the Covid-19 pandemic which severely stifled the informal sector.

Overall, there is an invaluable opportunity for public space to “serve as an instrument to message a whole set of other things”, says Haysom. He cites practical examples of how we should think of food in all city planning activities. This includes creating opportunities to showcase local food varieties, encouraging traditional African food and finding incentives for local producers to have preferential treatment over the sale of unhealthy foods. Public spaces such as community kitchens, he says, could be used to destigmatise hunger as these can become sites for connection, capacity building and knowledge sharing, but also activism, challenging the system that drives hunger.

As Haysom says, we need less preaching, chastising and pathologising of the poor and more building, sharing and re-imagining. We also need greater collaboration between private and public sectors and a different way of thinking about the power of informality in public space. South Africa is not unique in this and globally, cities are realising that old paradigms need to be replaced; nowhere better to put this in practice than in our public spaces. DM/MC

Marcela Guerrero Casas works for the Western Cape Economic Development Partnership, which convenes the Western Cape Food Forum, a knowledge sharing and support network of 359 food-related initiatives from across communities, civil society, government and the private sector. Initially established to provide life-saving food aid to vulnerable communities in the province, the Forum is aiming towards longer-term food and nutrition security through promoting local production for local consumption. This work was supported by Heinrich Böll Stiftung Southern Africa.