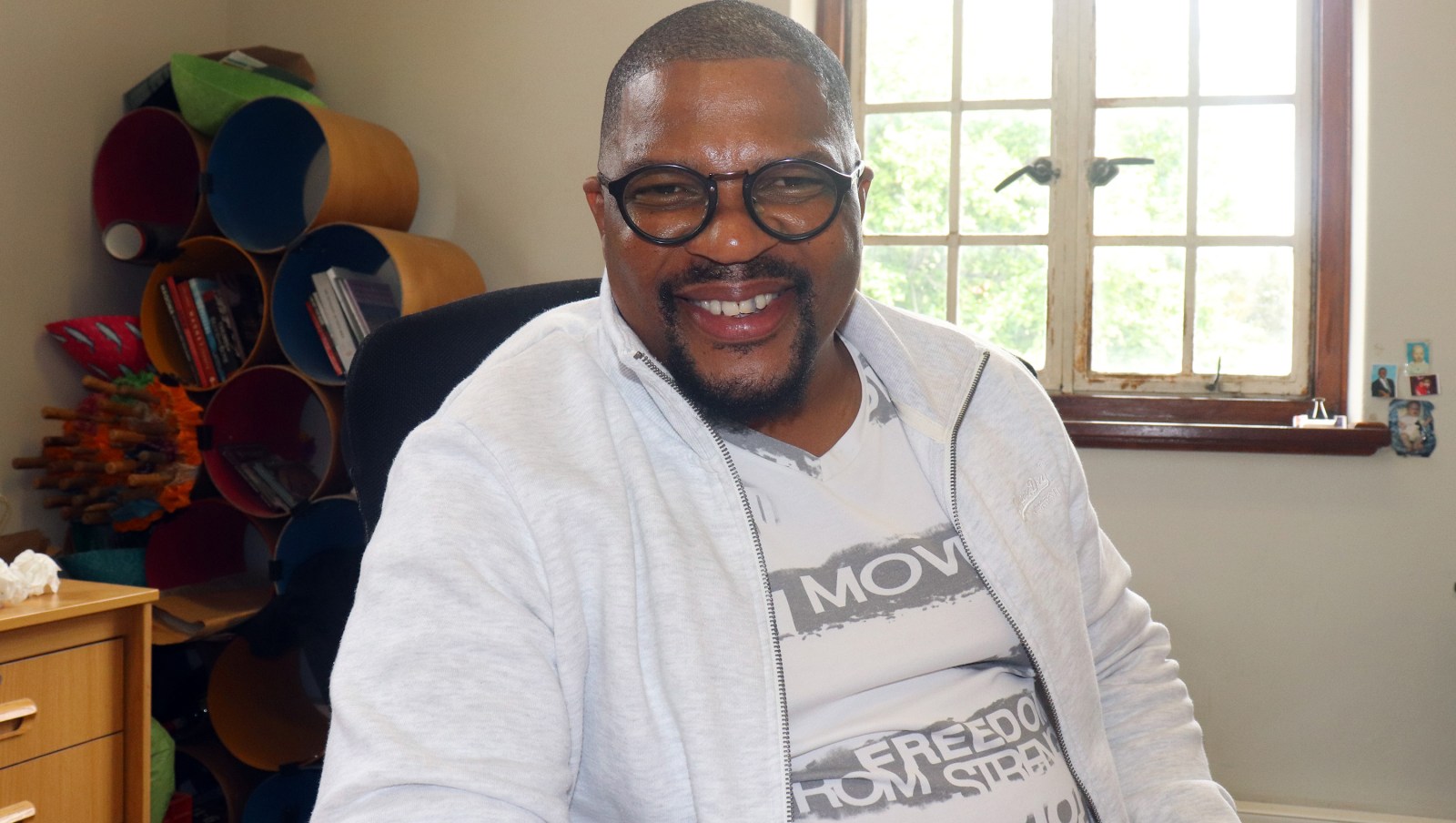 For Mandla Mbothwe the stage is the perfect place to facilitate healing for the audience. (Photo: Karabo Mafolo)

'Before I fell in love with the arts, I wanted to become a doctor,' the charismatic theatremaker says.

Mbothwe’s “obsession” with archives is evident in the productions he makes. In his most recent work, Nguvu yaMbegu… eNtabelanga, Mbothwe retells the story of the 1921 Bulhoek massacre, in which hundreds of worshippers were killed for refusing to leave a mountain they had occupied.

His previous works include Ingcwaba Lendoda Lise Cankwe Ndlela (The grave of the man is next to the road), a play exploring the impact of migration.

Mbothwe was born in 1972 and grew up in Nyanga East in Cape Town with three brothers. He was a teenager when resistance against the apartheid state intensified domestically and abroad and, like many young people, he was drawn to anti-apartheid activism.

In high school, Mbothwe assumed leadership roles and it’s easy to see why. He is charismatic, affable and knows how to draw the attention of everyone.

Pupils would be urged to stay away from school as an act of anti-apartheid activism, but they either wouldn’t stay home or didn’t see the significance of participating in the stayaway, he explains. He realised that speeches and pamphlets weren’t working to educate his peers about the Struggle.

“They were sick and tired of listening to speeches, so we needed to devise another way and we started creating dramas. That’s how I got involved in creative work. That’s when I started realising the power of theatre and performance in conscientising people, healing people and preserving collective memory,” says Mbothwe.

When he was in matric, he knew he wanted to study theatre at university. Mbothwe told his father he would be studying theatre at the University of Cape Town.

His father, a rubbish collector, was bewildered. “He said: ‘After all the sacrifices we’ve made and now you’re doing something that you could’ve asked your grandmother to teach you.’ Later, he realised it was more than that,” says Mbothwe.

For Mbothwe, theatre is not just a medium for entertainment; it’s a medium to heal and remind the audience of black South Africans’ history – from the sinking of the SS Mendi to the murder of the Gugulethu Seven.

“Me being part of the performing arts was highly politically motivated, but also driven by my desire to heal. My work stems from that place. Even before I fell in love with the arts I actually wanted to become a doctor,” says Mbothwe.

He attributes his desire to use performance art as a form of healing to his father and paternal grandfather.

“They were both herbalists. I grew up in a home where my father’s garden was called the Little Eden. If anyone got sick, my father would go to the garden and get some herbs.”

At a Nguvu yaMbegu… eNtabelanga post-show discussion in Cape Town, the audience described the play as “healing” and “spiritual”, recognising the point of his work, Mbothwe told DM168.

For audience members to tap into that healing, Mbothwe relies on what he says is the “spiritual ecstasy” his shows evoke.

“When you’re watching it, your interest is not the story, but the feeling of the place that you’re in. It’s similar to the story of Jesus Christ – our parents go to church not because they wanted to listen to the story of Jesus Christ; they know that story. They’re looking for a particular feeling that makes them feel whole, that reminds them of their humanity and their complexity. People want to feel like they belong and my shows try to do that,” says Mbothwe.

Mbothwe has won a number of accolades for his work, including best director at the Fleur du Cap awards last year for G7: Okwe-Bokhwe.

In Nguvu yaMbegu… eNtabelanga, which is set in the Eastern Cape, the characters speak isiXhosa and Sesotho and sing in Swahili.

The multilingualism in Mbothwe’s play also makes sense because he grew up in a home with a Sepedi-speaking mother and an isiXhosa-speaking father.

For Mbothwe, who also teaches a bilingual drama class, language is important. “We’ve been made to believe that our languages don’t fit into a progressive, civilised world, which has also contributed to us abandoning our knowledge systems.”

“For instance, white people wrote that when the SS Mendi ship was sinking, the black soldiers were singing and dancing. But they weren’t, they were praying. Those are the stories that we need to excavate and reclaim,” he says.

“Excavating” black South African stories is a tough but important job that Mbothwe takes seriously. It also requires humility “because these are real people’s stories, they include people’s uncles and aunts; people who fought many battles – some they won and some they lost – and we need to honour and respect that.”

He makes it clear that the stage is the perfect place to help audience members heal because “you can’t cheat healing and if you look at the trauma and the gendered violence in this country, you can tell we need to heal”.

Reflecting on his role as a theatre practitioner whose primary interest is history and healing, Mbothwe says: “[Steve] Biko says history works through people, and we have availed ourselves for history to work through us; that’s quite a powerful thing. It’s one way of looking at what we, as storytellers, are responsible for.” DM168

An abstract painting of a reddish, blueish sky.

To buy herbal seeds or a notepad.

To smoke a cigarette.

What’s the one thing you wish you’d learnt earlier in life?

How to deal with finances.

Three books that have affected your life?

The Bible; Astonishing the Gods by Ben Okri; and Indaba, My Children by Credo Mutwa.